My family, along with a very large group of other families, has gone on an annual camping trip the weekend of Halloween since I was about six or seven years old (last year’s trip can be found here). This being said, my child has yet to own a Halloween costume in her short life.

So, while everyone else is showing their kid’s Halloween costumes (And they’re all ADOOOORABLE, by the way!), I shall write about camping-ish’*.

* Camping-Ish: Going on a trip that is CALLED a camping trip, but staying in the lodge on the campgrounds, because you’re too much of a wuss to tent-camp – not for fear of the outdoors, but for fear of your child waking up a daybreak because she’s used to having blacked out windows. This fear is doubled on the weekend of the time-change, because sleeping in a tent with said toddler would guarantee that you would not, in fact, get your deserved extra hour of sleep.

On our way to camping-ish, we had to stop at our favorite treat in the world, Wing Stop (which is sadly no longer in Birmingham, so we look for any excuse we can to stop there “on the way” to anywhere else.) 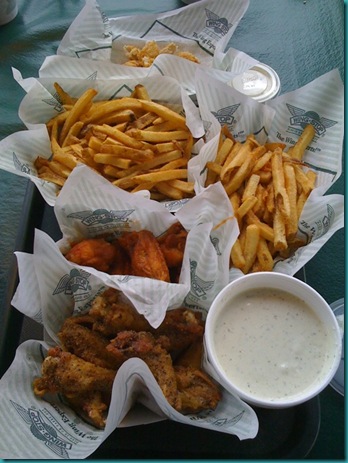 Just so you know, in case you have a Wing Stop near you and should be appreciating these delicacies regularly since we can’t, not only do they have amazing wings, but their FRIES are what really put them over the top. They have sugar AND salt on them – and wow is it amazing. And their ranch dressing – again, perfection.

And Chris and I aren’t the only ones who think so: 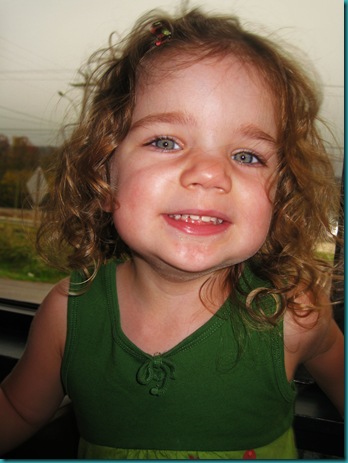 (Wing Stop did not give me a single free Wing to say how great they are, but I wouldn’t mind it a bit if they did.)

We were camping at Maranatha Camp and Conference Center, on the lake in small-town Guntersville Alabama, where such high-brow shopping such as “Bubba II: Fine Gentlemen’s Clothiers” can be found.

(I especially love that it had the “II” on it, as if to say “We’re so fiiiine that we have TWO shops! Now hand me thar my spitoon!!”)

We got to the campground about 4pm, in time for a VERY late nap for a VERY excited, yet tired toddler. She ran into our lodge hotel room, all while screaming, “YAY!!! CAMPING!!!”

My Mom laughed at us. “She has no idea what camping really is, does she?”

Why spoil the magic?

After she woke up, we headed out to see the fire that Chris had been building “for our enjoyment” (aka: He’s a raging pyromaniac). 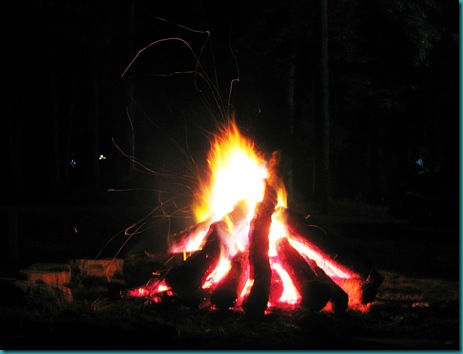 I’m afraid that Chris might pass on his obsession to Ali: 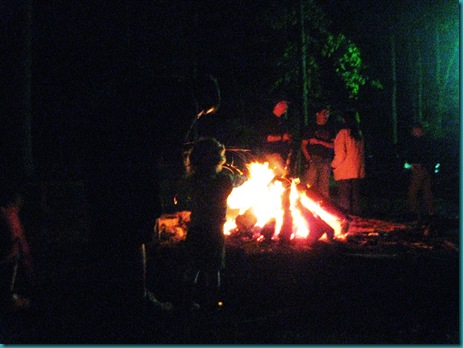 Ali and Pop had a fireside chat (maybe he was trying to counteract Chris’ pyromania with his fire-safety talks that I got as a child): 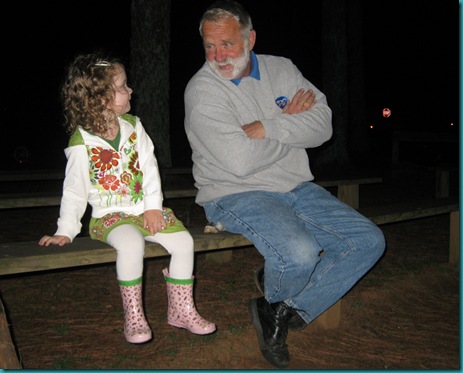 And Pop showed her how to use her “camping surprise” from Daddy, a lantern: 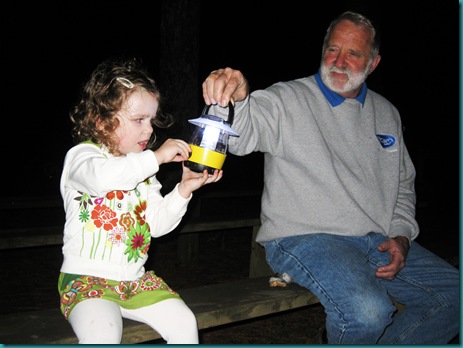 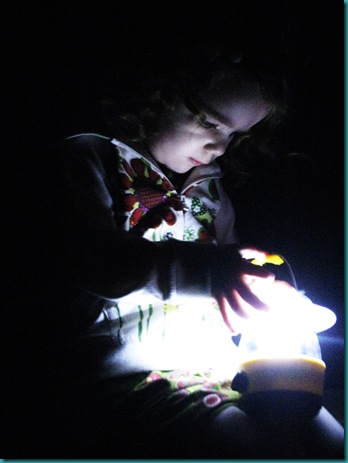 Another girl on the camping trip gave Ali a glow-stick. This, of course, gave her the esteemed award of Favorite Person of the Weekend. Ali immediately dubbed her “The Girl in the Pink Shirt”, and insisted that was her name, despite our efforts to explain that her name was ACTUALLY Avery.

(In fact, this morning, Avery dared to wear a green shirt. But no worries – Ali quickly adjusted and referred to her as “The Pink Girl in the Green Shirt.”)

I taught Ali how to wave her glow stick around to make pretty lights in the sky: 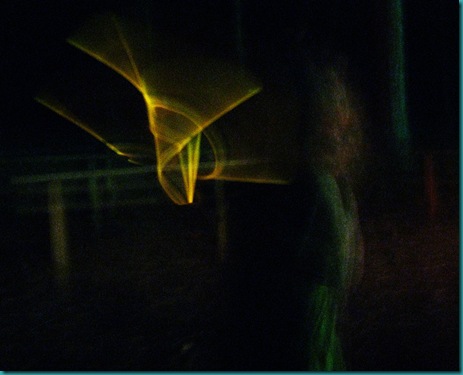 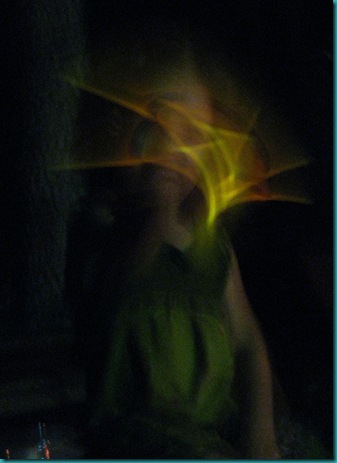 Although for the most part, she enjoyed the fire, every time she would get cold or bored, she would whine, “I wanna go back CAMPING!”

After a long, late night by the fire despite her random outbursts of desire for the indoors, it was time for bed. Wanna see how much we like to sleep in? THIS is really “roughing it”: 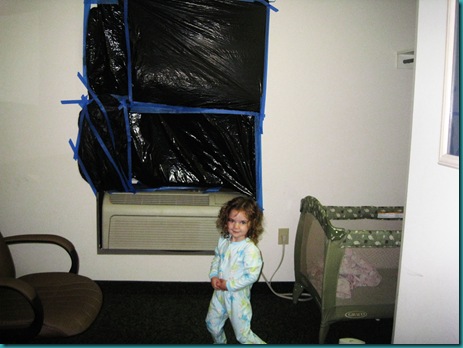 Ahh…blacked out windows = sleeping until 9am = TOTALLY worth it.

Now I must say, without boring you all yet again with my medical woes, that I was rather zoned and quite a bit anti-social (sorry, fellow campers), due to discovering that apparently, my Prilosec (that I quit taking on Thursday) was covering up the fact that I have a stomach ulcer or something similarly painful. I had constant stomach pain from Friday night on through today that fluctuated from mild to don’t-talk-to-me-or-I-might-scream severe.

I did go to the doctor today when we got home and am on new medicine, but will need to go to a specialist if it continues. But thanks to my stomach pains combined with a very graceful camera-to-face crash which busted my lip and swelled my nose, I was a sight to behold.

I swear my body is dyslexic and thinks that I’m 82 instead of 28.

However, I did manage to clue in and have some fun:

On Saturday, Mom put us in charge of coming up with treasure hunt clues for one of the groups of kids. So we set off, looking for great clues. 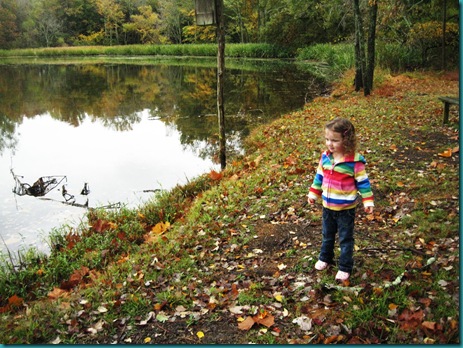 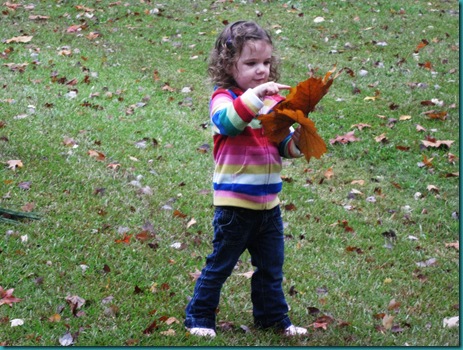 Since our clues were for 4-6 year olds, we couldn’t use this, but were very puzzled by this plank, with “Romans 8:28″ carved on it: 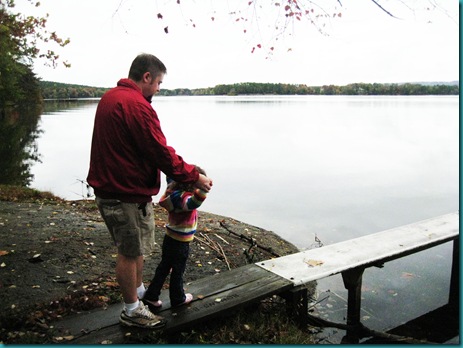 To save you the trouble of looking it up, it is: “And we know that in all things God works for the good of those who love him, who have been called according to his purpose. “

I’m not quite sure what that has to do with walking the plank, but I guess the idea is that if someone makes you walk the plank – no worries! God will use it for good.

So, Ali and Chris put it to good use and walked the plank: 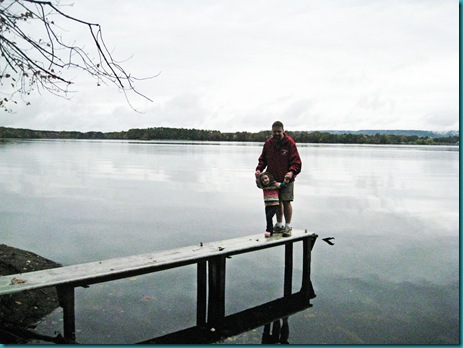 We finished our treasure hunt duties and headed to play some ball. Ali was shy about her mad skills: 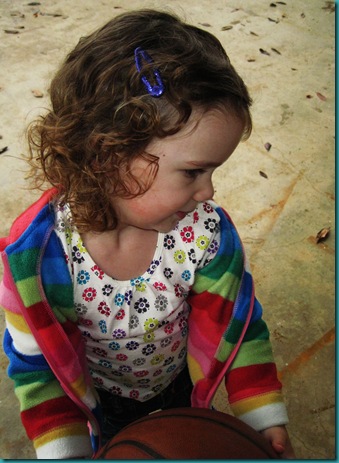 But she finally let loose… 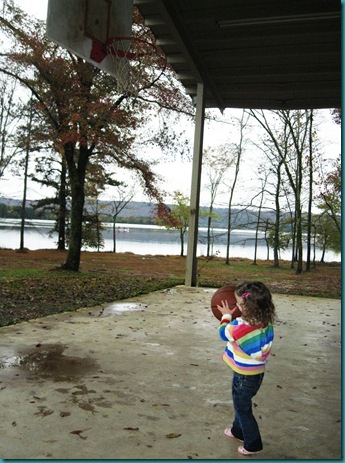 And beat everyone at horse. 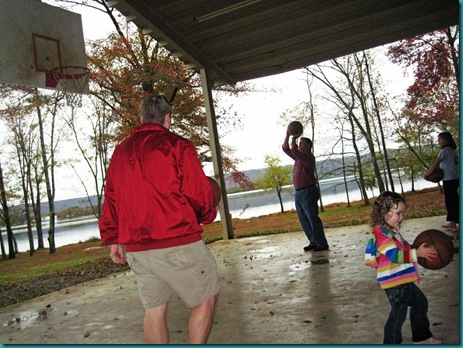 Poor thing worked the whole time on being able to actually LET GO of the ball when attempting to throw it.

We furthered our camping experience by going on a canoe ride together: 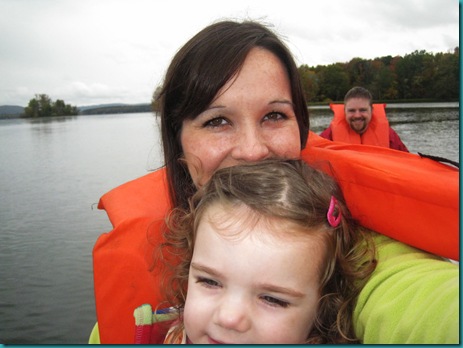 (Luckily right before my busted lip and nose)

We didn’t know how Ali would like it, given our history with boats, but it turns out that, unsurprisingly, Ali prefers slow, quiet boats to fast, loud ones, and didn’t want to come off the lake, even when it began to rain on us.

This morning, after fooling her into having NO IDEA that she had a justifiable reason to wake up an hour earlier due to the time change, Ali helped Pop make breakfast, again showing her outdoorsy side by insisting on wearing a crown and being referred to as PRINCESS Ali: 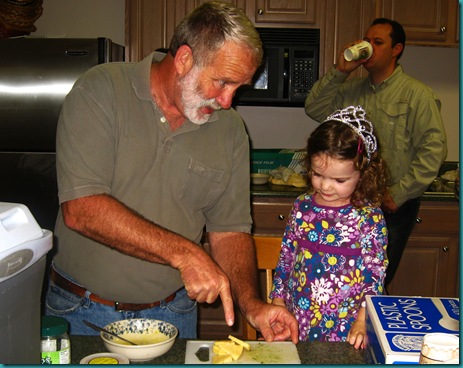 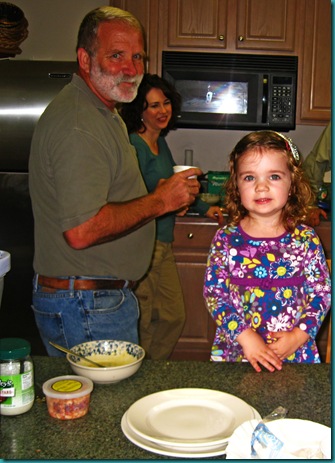 …and then, it was time to head home. She sat, dazed, holding for dear life onto her sucker, all the way home. Camping. It wears a toddler out.

14 thoughts on “The Only Blog Post This Weekend Without Halloween Costume Pictures.”