Chris and I are both very sentimental people. We love to keep things to remind us of days gone by.

Granted, most of these things sit in boxes in our basement, like my cast from when I broke my arm in the 7th grade and his “super-cool” favorite Junior High item of clothing – his denim and plaid vest. So it’s not like we actually look at this stuff – but just the fact that WE know that they’re there…it feels nice – as if we’re in touch with our past. Without letting it clutter up our house.

Thankfully, I don’t think that our nostalgitis is to a point to qualify us for the TV show Hoarders – wow, that show makes us twitch with claustrophobia. And it makes us throw out a few things, just to ensure that we NEVER end up eating family meals on our bed because that’s the only available surface.

Anyway, that being said, we, like most couples, saved the top layer of our wedding cake for our first anniversary. It’s tradition, after all. We forgot about it that first year, but were determined to follow tradition for our second anniversary. However, we bought a house before that happened, so we actually MOVED the cake along with our other frozen goods to our new house.

But, it paid off – we actually remembered the next March. We got it out, thawed it, and cut us a big slice of nostalgia.

And it was NASTY. Not just in a “Oh – that’s not very tasty” way, but more like a “Where is the nearest garbage can because this is coming out of my mouth RIGHT NOW” kind of way.

It was stale, as hard as eating a piece of siding, and as tasty as eating one of those cardboard boxes that is holding the rest of our crap memories in the basement.

In fact, we suspected that it might have been styrofoam all along – just icinged up to look like cake.

So of course we threw it out right then.

Yeah. We Ziplocked it back up and stuck it back in our freezer. For some reason, it just seemed like an injustice to throw it out just because it happened to have issues with edibility.

It has been 6 and a half years since that second anniversary, and we have moved yet again. Guess what we still have in our downstairs freezer, right next to the frozen vegetables? 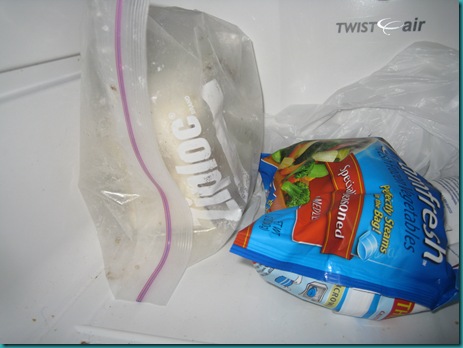 At least it’s in the basement with the rest of our memories.

It’s kind of a joke now, which makes it even harder to get rid of. It’s been around this long – how could we just throw it out, as if it meant nothing to us? As if it hasn’t given us many a chuckle at the absurdity of its continued existence?

I pulled it out of it’s hallowed shrine to photograph it just for you. It was nasty and sticky and I felt the need to sanitize after it’s photography session, but here is our masterpiece: 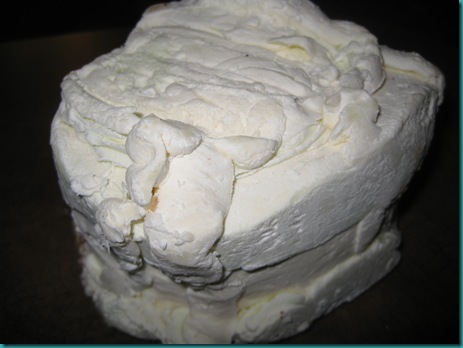 Wanna come over for dessert some time? 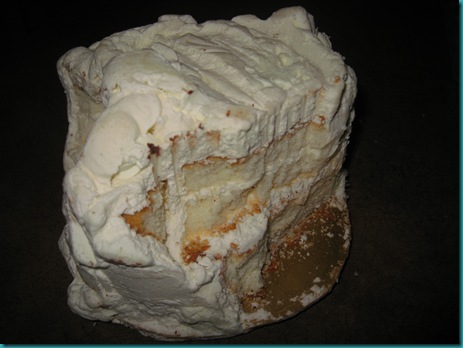 I’m pretty sure that some of that icing used to be a nice sage green color. And it certainly didn’t originally look like it was iced by a cement truck.

Please don’t turn this post in to Hoarders. My formerly broken arm would be very upset if they made me throw away my cast.