…for someone not old enough to watch Saturday Night Live.

I am afraid that my daughter is going to be a one-upper.

Here’s a sampler, for those not familiar (although it’s much better if watched): 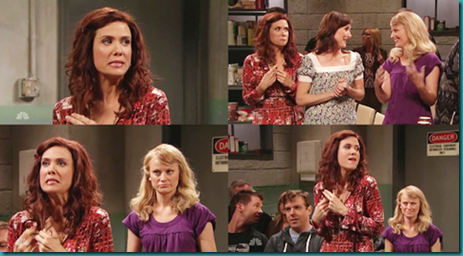 Gina: Yeah, I have a card for everyone to sign. Some of you might not know this, but Mrs. Jacob’s 15 year old cat Whiskers McGee passed away last week.

Penelope: My cat passed away tooo sooo…his name was Whiskers McGee the First sooo… He was 17 years old, so just a little bit older than her cat soo… It died a few minutes ago too sooo… just effects me more soo…

Lisa (annoyed): That cat was like a child to her. 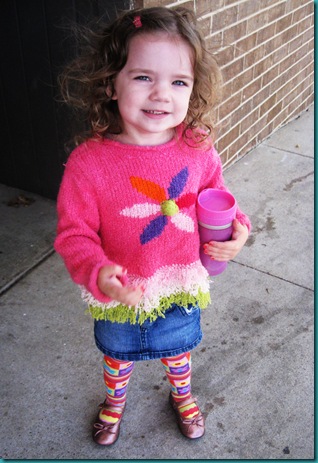 She’s been obsessed with learning about car names lately. Every car we pass, we must talk about it’s name. Her favorites seem to be Jeeps, Chevy Suburbans, Honda Accords, and Mercedes Benzes (She likes variety).

But she has started having this constant conversation under her breath every time we “play cars”…and every time, it gets bigger.

I have a toddler who is a one-upper, soo….she can one-up your toddler anyday, soo….she thinks she could drive when she was a baby, soo…she’s going to be more annoying than your toddler sooo…..

* Editor’s note: since you have commented on her outfit and especially her tights, you’ll be interested to know that picture was taken directly before the poo events that transpired in the Sol Azteca Ladies’ Room…those tights, although now clean, recleaned, and sanitized, have been through a lot since that photograph was made.

11 thoughts on “An Eerily Spot-On Impression…”