I am NOT blogging today.

I spent half of yesterday on the couch, or in other general misery, and the other half working, because during-naptime-work didn’t go away just because I didn’t feel good.

Here’s hoping that today is better, but we’ll see.

What’s wrong with me?

Well, the main ailment is that I have four HUGE Mouth Ulcers.

These things have chronically pained me since childhood – they like to come in spurts and make my life miserable.

If you’ve never had one, be sure to thank God for your unbelievable luck. They are white and red, pussy, swollen, open and oozing sores inside of the mouth. They start little and get humongous, and also grow in pain levels as they go along (don’t forget to thank me for NOT showing you pictures – for once I took the high-not-gross-road.)

And NO, they are NOT herpes. Those are the ones on the OUTSIDE of the mouth.

These you get on your gums, inside your cheeks, on the roof or floor of your mouth, or on your tongue.

Which means that eating, drinking, talking, and anything else that requires the mouth is either excruciatingly painful or out of the question, and has been for three days.

Besides that, I’ve had a sore throat, nausea, a bit of a fever, am STILL dealing with my phlegm issue worse than ever, and in general just haven’t felt good (these things often come along with my mouth ulcer breakouts – so don’t get any ideas – I am NOT pregnant).

On the bright side, I was delightfully surprised at how wonderfully pleasant Ali was yesterday, considering that we:
a) stayed at home all day, and
b) Mommy somewhat miserably incapacitated.

She played by herself, was very pleasant and concerned about me, let me take a nap while she watched Curious George on the couch with me, and in general was a joy to be around.

I need to be sick every day.

So, I have nothing of great amusement to say since I spent the whole day in agony, but tonight is the grand kickoff of the newest season of Project Runway, and so to celebrate (even though we won’t watch it until this weekend due to our small group tonight), I decided to finally share my “Tim Gunn” story from BlogHer.

While at BlogHer, I had no idea when or where any of the celebrities were scheduled to appear (this information was oddly left out of all BlogHer Materials), but I just happened to be going by the exhibit hall and saw the lines and the man himself, Tim Gunn.

I love Project Runway, and he was the only celebrity that I had any interest in meeting (sorry, Paula Deen), so I hopped on over and entered the long, long, line.

While waiting, everyone was nervous and trying to decide what they would say to him, and bemoaning past celebrity meetings where they completely embarrassed themselves.

The line was hardly moving, and it was almost time for Tim to be done. People were taking FOREVER. I finally got a peek, and it was taking so long because people were actually showing Tim pictures of their kids on their iPhones!!

Seriously? People! A celebrity has NO interest in seeing your baby’s pictures!! Although he was playing along very well…

It was taking so long that Tim’s posse finally came through the line and told everyone left that we would have to go up in groups of three. Even this didn’t seem to speed up the process, thanks to those who really thought that Tim needed to hear (and see) their life story.

Soo while I was waiting, I decided that in my moment with Tim Gunn I would try to humorously apologize for us bloggers who thought he gave a rip about seeing pictures of our kids.

I walked up, he gave me a hug, and I started into my silly one-long-sentence spiel. As I was saying this, he was looking at my outfit and making hand motions and facial expressions as if he were trying to get in a word edgewise to compliment me on my clothes.

Then he heard what I said, and in the MOST genuine voice ever said, “Oh no!! I ABSOLUTELY love seeing all of your pictures of your kids!!”

He really sounded like he meant it. I guess that’s why he gets to be on TV – he’s like the world’s greatest actor.

In all seriousness, he sounded about a hundred times more genuine than I sound at my genuinest in every word he said to everyone I heard him talk to – I was totally impressed.

Anyway, that was the end of my moment talking to him, so he never got to compliment my outfit. Earlier in line when I was listening to everyone else lament their past celebrity meetings, I thought it was a rather silly thing to obsess over – as if the celebrity is EVER going to remember the stupid thing that YOU happened to say.

But I did find myself rather second guessing my Tim-Gunn-Silly-Meeting-Tactics afterward…if I had just said hello, let him “genuinely” complement my outfit, and moved on…??

Then I wouldn’t have this blog post to write. 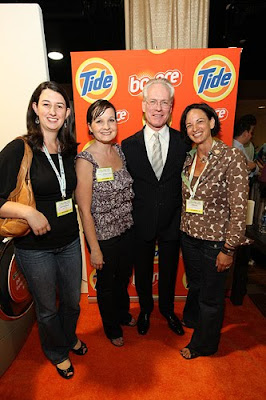 Oops – I thought I was going to take the day off from blogging. I guess this counts as phoning it in, overly wordy Rachel style.

Now I’m going to go gargle mouth sore medicine for the rest of the day, not that it helps.