This is a guest post by my Dad. He told me this story a few weeks ago, and I have been cracking up about it ever since.

In a sympathetic way, of course.

So I asked him to write it up for me, which he graciously agreed to do. I find it fitting and an honor to have my Dad as a guest blogger on Father’s Day weekend!

A bit of background: Among other professional pies that he has his hand in, my Dad is a Tech Inspector with the American Le Mans race series. He has also had such adventures as rebuilding and navigating antique race cars from one end of Mexico to the other (several times!!), and one very grand 45 day race from Beijing, China to Paris, France (in a 1950 Ford – they went through India, Iran, Tibet. . .you name it!). I am definitely going to be bugging him for more guest posts in the future!

By Vic, aka Rachel’s Dad

Have you ever had one of those days? You know what I’m talking about. Nothing seems to go right. The toast lands butter side down, or the socket you are using (sorry girls, this might just be a guy thing) falls off the ratchet and rolls to the exact geographical center under the car you are working on.

Yeah, one of those days.

Whenever I think I’m having a bad day, I remember back a few years ago to a young lady I “met” at the final American LeMans Series race of the year, at Laguna Seca Raceway in Monterey, California.

I was walking through the crowd behind the grandstands as I headed to the starting grid for the pre-race activities. You know, when they do the flags ceremony, the military fly-by and the “gentlemen, start your engines!”

There was a set of stairs off to the right leading up to the backside of a raised podium where the celebrities, dignitaries and the like would do their thing. A young lady was ascending the stairs wearing a sash, some type of blouse, high heels, a tiara, and some very tight white pants.

As she reached the next to the last step, where her feet were about eye level with the milling crowd, the zipper on the back of her pants decided that enough was enough, and decided to let go! There had been no panty line because, well, you get the picture. She immediately turned her back to the wall to hide the “situation” and our eyes “met”. Of all the people in the crowd below, she looked me straight in the eyes before disappearing into a sort of anteroom behind the podium.

It embarrassed me, so I could imagine how she must have felt.

I worked my way out onto the racetrack and took up my position at the start/finish line for all of the pre-race activities. When it came time for the National Anthem, who do you think was going to sing?

The television cameras were doing a close up and her image was on the jumbo-tron TVs all over the racetrack, not to mention live broadcast over most of the western world! Well, she did a spectacular job, that is, up till the last note, when she choked.

You could see and feel everyone in the crowd trying to help her out, but no, she just flat couldn’t be helped. Luckily a couple of F-18s did a low fly-by and the TV cameras moved to them. I felt so sorry for her! As I watched the tears come down her face, she looked me straight in the eyes, again. I mean, I must have looked like “Where’s Waldo” in the enormous crowd, but our eyes met!

The race went off relatively smoothly, ending up four hours later, well after dark. I was assigned to go to the winner’s circle and secure the class winning cars to be sure they were not modified in any way before post race inspection. I have learned over the years just how far back in the crowd to stand to stay out of the spray of champagne, but still be in control of the cars.

Well, to my surprise, (and dismay), there she was again, on the podium to assist in ceremonially passing out the trophies. She had straightened the tiara, apparently fixed the zipper and removed the streaks of mascara from her face.

I say to my dismay, because I had already been admiring the beautiful cut glass trophies that were to be awarded to the winners.

What could go wrong here?

The very first trophy she handed off slipped from either her or the recipient’s hands and crashed to the floor, with the expected results. She kept a large, rather pained smile until she looked out into the crowd, and, yes, our eyes met! She immediately burst into tears and ran off the stage.

I’ve been back to that event many times, but have never seen that young lady again. But her image is burned in my mind forever: 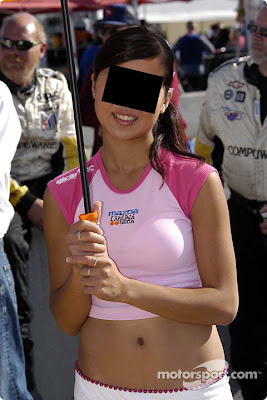 (I black-boxed her face so that she could one day, maybe, just maybe, forget about this woeful day.)

Whenever I think I’m having a bad day, all I have to do is remember what a bad day can really be like!

Thanks, Dad!! And Happy Father’s Day!!

11 thoughts on “The Woeful Tale of Laguna Seca Girl.”