. . . and it certainly wasn’t as hard as that title is to understand.

So I’ve been wanting some artwork for the house. You know, to put something on our walls besides the 7,065 pictures of Ali that are currently smothering them.

I have always been very fond of geometric art. Especially with bright colors. I just love it – it’s so fun and joyful. I’ve looked for some lately, and it was just very pricey and small canvases. My favorite of late was the artwork at Newk’s.

His response was, “I bet it’s harder than it looks.”

Then, a couple of weeks later, Amanda and I went there, and I told her that I wanted to try painting something similar.

Her response was, “I bet it’s harder than it looks.”

Well, their overwhelming confidence in me gave me the boost that I needed to try it.

Not that I deserved any confidence at all – I have absolutely NO artistic skills. At least when it comes to drawing things that resemble something. I couldn’t render a drawing of a person at a more technical level than a stick person to save my life. As I’ve told you a couple of times, Ali’s artistic skills have already surpassed mine. It doesn’t take much.

But I have always loved doodling geometric designs, and have had some success in drawing “mathematical art” in the past, such as Celtic Knotwork: 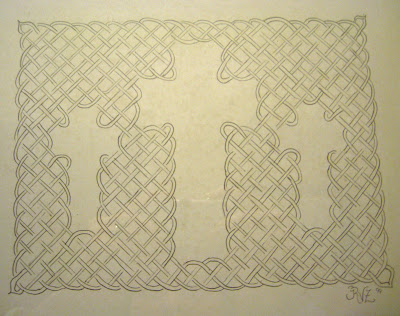 (I drew that for a birthday present for Chris while we were “just friends” – but we started dating mere days after. The power of art, I tell ya.)

So I decided to do some research photography and take pictures of the paintings in Newk’s that I liked.

Of course it was a super-busy night at Newk’s, so that made subtle photography impossible. I took this picture from across the restaurant, without holding my camera up, and with no flash to try to not draw attention to myself. I’m sure this guy appreciates being in my research: 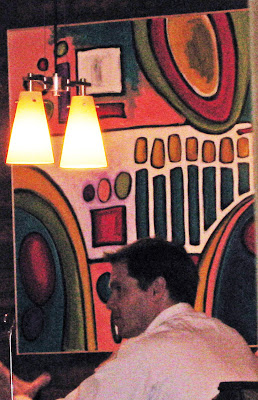 This one was a little easier to take sneakily, since it was in the bathroom hallway: 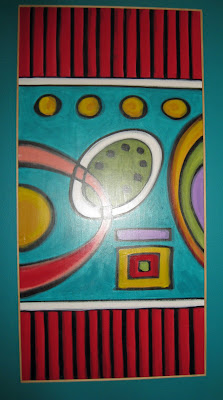 Ok: So I had my research.

Then I went to Michael’s and attempted to buy painting supplies for less than the cost of an original Monet. I actually lucked out, because I found a 10 color paint set that was missing a color. It was the last one they had, so I took it up to the counter and asked if I could get a discount since a color was missing. The grumpy elderly cashier looked at me doubtfully and said she’d have to ask the manager. The young and sweet manager came over and said without missing a beat, “Sure! I can mark 75% off. Will that work?”

So I got my supplies.

Next step: decide what geometric designs that I wanted in my picture and sketch it out: 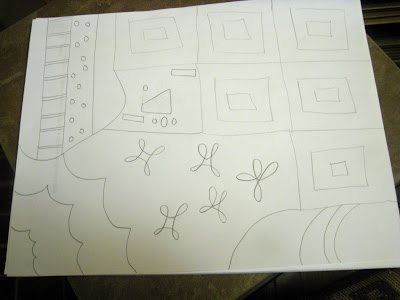 I knew I wanted the squares, because we have that design recurring in our living room, and I thought it would be fun to match it in a painting.

Next step: sketch my final draft in pencil on my canvas.
I started by very ruler-heavy and mathematically sketching my squares: 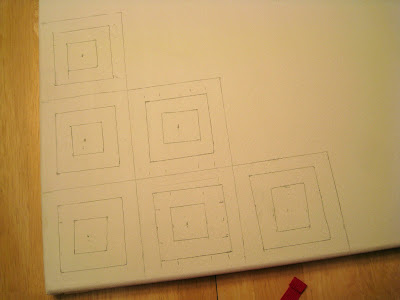 Then freehanded the rest of the plan: 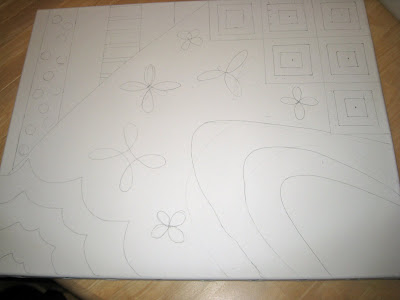 Finally! On to using bright and fun colors!! Here was my day one’s accomplishments: 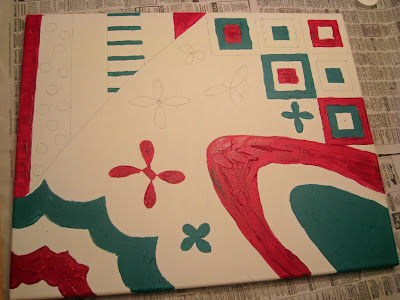 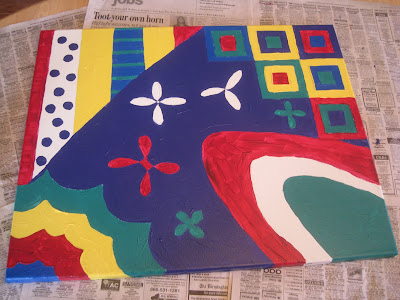 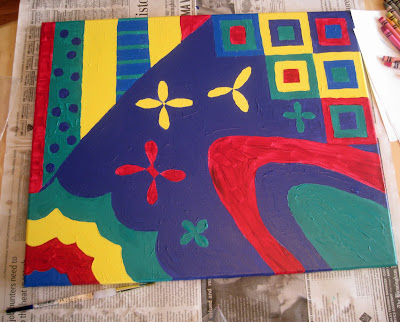 You might have noticed in the corner of that picture that I had the privilege of working side by side with another artist: 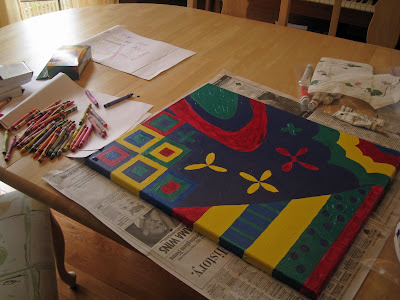 My original plan was to only work on it when Ali was asleep, but after she caught sight of what I was doing, she begged to “paint with Mommy”, so we actually had a couple of sessions where she colored and I painted. It was a much better deal, except for those times that she felt the need to grab my arm while I was doing intricate, straight lines.

Well, they were supposed to be straight anyway.

Day four, I put the final touches on: the all-important black lines to make it look a little neater: 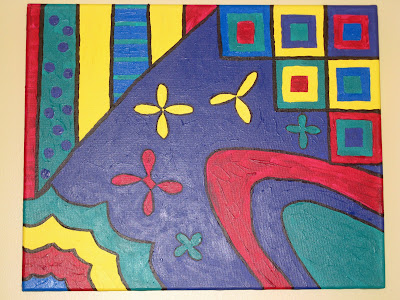 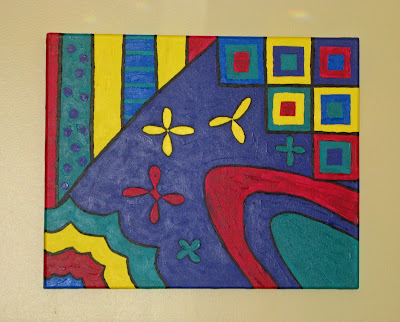 And, in case you wondered, I did paint the edges as well: 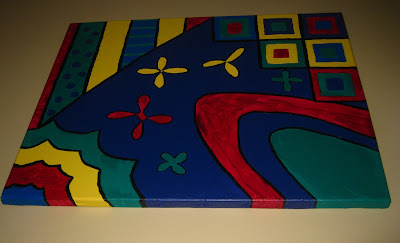 Now obviously I know that anyone who knows anything about art would probably point out all of the flaws in my strokes, technique, color coordination, and my EXTREME lack of a steady hand (which I can thankfully blame in part to my partner in paint), but it was a lot of fun, and it wasn’t as hard as it looked like it would be harder than it looked!