Chris and I went to WorkPlay last night to hear Ashley sing with Red Mountain Music. Mom and Dad kept Ali overnight, so we made a rare “Monday Night Date” out of it.

We had never been to WorkPlay before, and loved the setup! We got to sit in a cuddly, comfortable, round booth directly centered with the stage. I do believe we managed to snag the best seat of the house!

Although we were on a date and we had a cozy, romantic booth all to ourselves, we did have to keep our “canoodling” (as our small group refers to our overly affectionateness to each other) to a minimum, since we were front and center with Ashley, AND there was another couple from our Sunday School class in the next booth over (sigh).

Drew Holcomb and the neighbors started the show off with some awesome “jazzy” Christmas music: 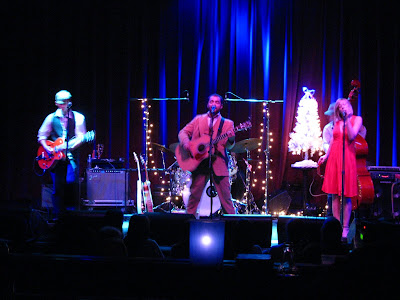 Drew’s wife, Ellie, talked about how her family was musical growing up, and that they had written a song for one of her brothers a few years ago who was away for Christmas. I thought to myself, “how nice. A musical family.” Chris bought their CD afterward, and when I looked at the credits to that song, I was highly amused at my “small time” image that I had given to her family, when I saw that her Dad was Brown Bannister!!

I mean, he basically owned the contemporary Christian music industry in the 80’s and 90’s, right? Or at least he owned the big 4 – you know – Michael W Smith, Steven Curtis Chapman, Amy Grant, and Sandi Patty. I wonder if he is still as involved in the CCM industry as he used to be. . .

But at any rate, that’s what I get for jumping to conclusions.

After they did a great show, Red Mountain took the stage, and Ashley, of course, sang amazingly and blew everyone away with unbelievably breathtaking versions of everyone’s favorite Christmas songs. 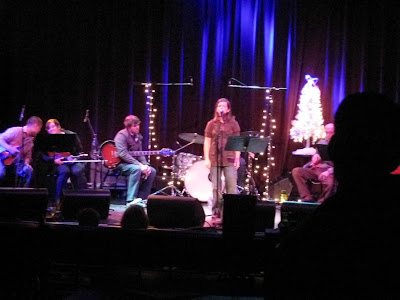 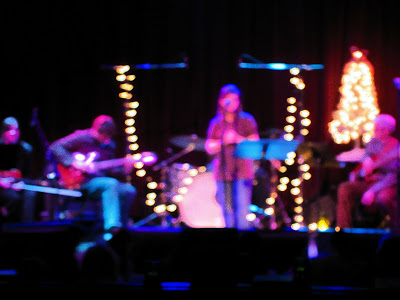 Ellie also came back and sang harmony with her on a few of them: 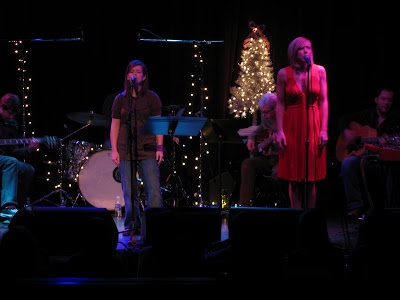 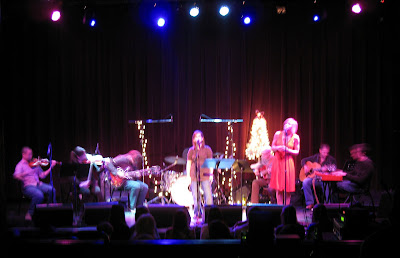 (I especially like Brian’s (far right on the keyboard) hammer-head movement in the above picture.)

It was an awesome night. So Christmasy, so romantic, so cozy.

If you haven’t bought their Christmas album yet, you should. It’s awesome. Every night, Ali begs me to “sing Ashley singing”. Every time we get in the car, Ali asks “Turn Ashley up, peeeese” (which, by the way, has been an AWESOME respite to continuous requests for Veggie Tales).

You can also get any of their other 5 Albums and download their free “B-Sides” off of their website. Ashley sang one of the (free) B-Sides last night, Sweet Well of Bethlehem. It was one of the best songs of the night.

Now that you’re completely jealous that you missed out on the best concert of the year, I am done.