I am not one to make health-related New Year’s Resolutions. I sometimes do write an all-encompassing goal sheet for my life in the upcoming year, but as far as saying “starting January 1st, I’m going on a diet! And exercising!!” – That’s not me.

However, Chris and I got one Christmas present each that have become immediate motivators for a healthier lifestyle, and at the moment (four days after Christmas, albeit), we are super pumped about them and the possibilities that they bring to the table.

So I’m going to tell you about them, one at a time.

Today is my present: a Juicer. Chris’ Mom and Dad gave it to me, and I have become increasingly excited about it since I received it. When coming up with ideas for Christmas presents, I put that on my list, because it had been something that I was mildly interested in as an idea. However, now that I actually have one, I am hooked.

The idea of a juicer is that fruit and vegetable juice loses it’s nutrients (and flavor) quickly, so the fresher you make it, the more nutrients you’re getting. Plus, with a good juicer, you get much more of the fruit made into the juice (and it is juice, not pulp), so it is very filling as well.

And, it is fairly easy, because for most fruits and vegetables, you stick the entire, whole fruit/veggie into the juicer, seeds and all.

So today, I have my first few juicing experiments and corresponding results, in pictoral form, of course.

Here is my beloved juicer 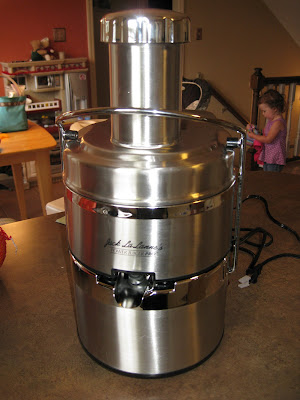 And my pile O’ produce (ironically purchased at Wal-Mart. Though I have a juicer, Hippy I am not. Yet.) 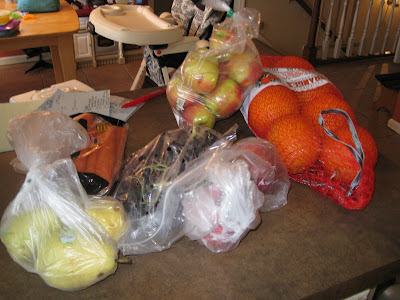 My first juice consisted of an apple, a pear, an orange, and a handful of grapes. 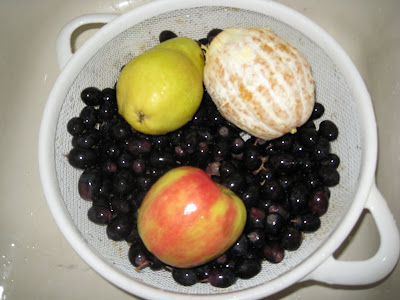 You put the fruits in, softest to hardest. Here’s my grape juice coming out: 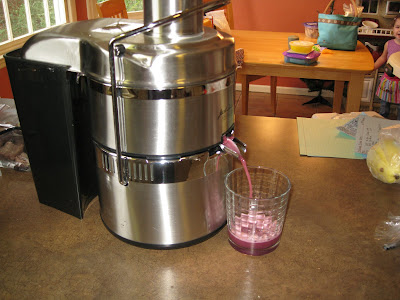 The orange juice coming out onto my grape juice (aren’t all the colors pretty?) 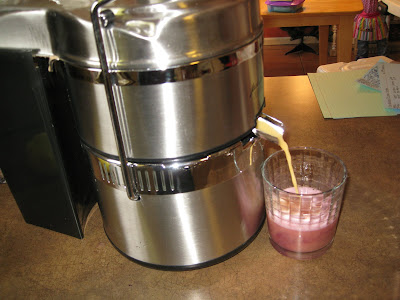 And my final mixture: 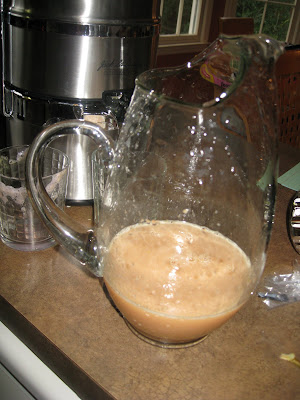 Ali was more than willing to give it a try, and she immediately proclaimed it yummy. 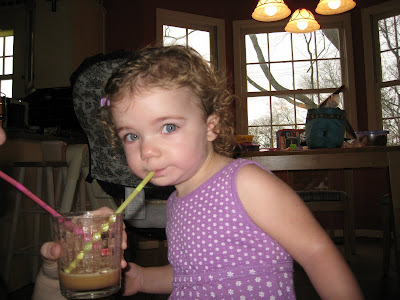 I then took the pulp – what was left over after every milliliter of juice was squeezed out – and attempted to make homemade fruit roll-ups. My mom made these when we were kids with her canning leftovers, so I thought I’d give it a try: 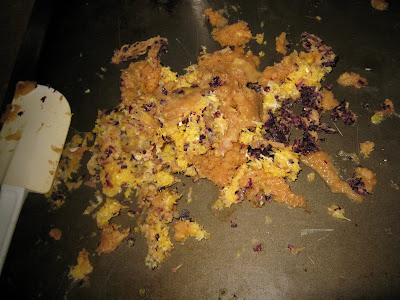 I was very proud of myself that the only product I wasn’t going to be using out of my fruits was the orange peel, and this pile of leftovers, which included a hard part of pear skin, the pear stem, and the plastic label that I apparently forgot to peel off of the pear (oops): 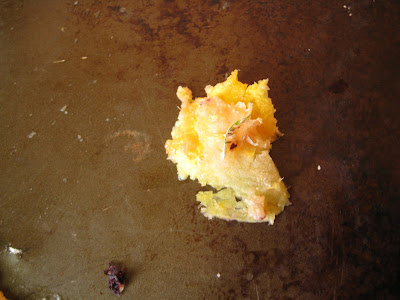 And, although my fruit roll-up came out beautifully, 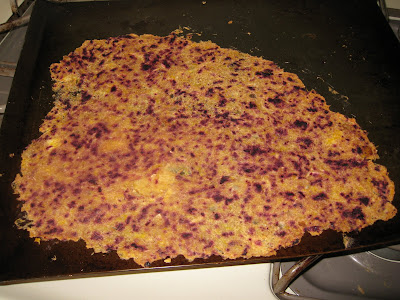 it didn’t taste good at all. Juicing Lesson 1 learned: When juicing, oranges don’t produce good pulp, because everything comes out tasting like bitter orange seeds. Ah well. At least the juice was delicious!

So then it was time to try some Veggie juice. Now Chris liked my fruit juice, but I figured he may or may not like the veggie juice. However, I love juice, including vegetable juices like V-8, so I was looking forward to trying it. So I got out my next set of ingredients: 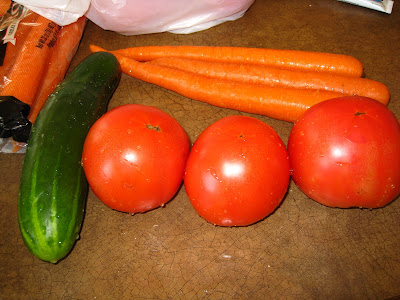 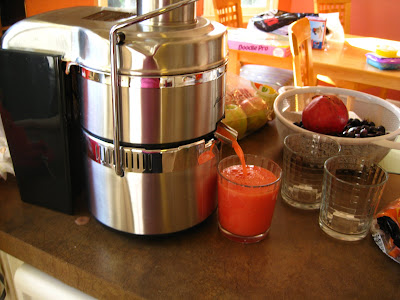 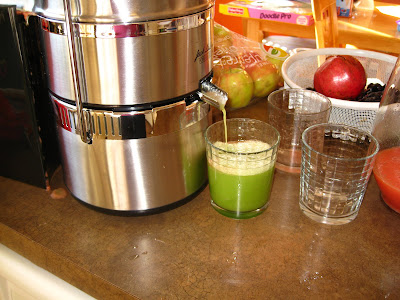 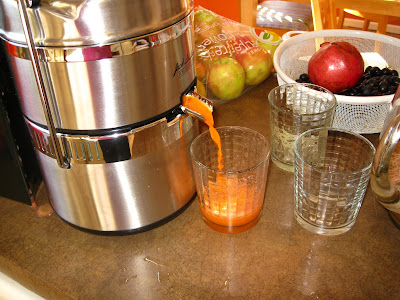 And mixed together, they made an unappetizing, somewhat dirty putrid orange/brown color: 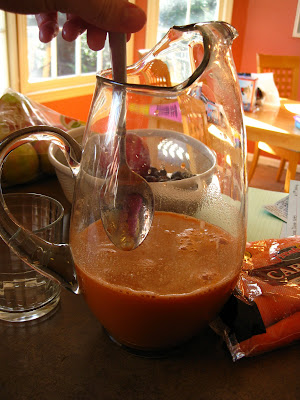 And, although Ali and I drank it and Ali even proclaimed it “deelishus!!”, 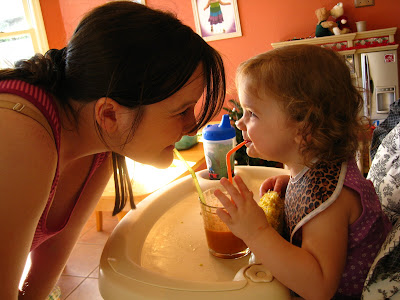 I was disappointed that it wasn’t that great. I mean, it was drinkable, but I wouldn’t call it delicious, by any shot. Chris tried it and said it wasn’t terrible, and that he would drink it medicinally if called for.

The next day, I very scientifically juiced them all separately again, then did different mixes to try and figure out what the offending agent was, or what the magical mixture was:

Again, I was unable to find a suitable mix.

However, I am very happy to report that less than an hour ago, I discovered the secret to yummy vegetable juice: A lemon!! Oh my goodness it was so much better. It was actually delicious! Just what I had hoped. Lesson #2 learned (and, by the way, thanks Kitty and Leo for leaving me those lemons from your tree – they were my veggie juicing lifesaver!!).

As far as my veggie pulp, it’s going into a baggie for Mom’s Chickens (assuming she wants it or doesn’t have a better idea of what to do with it: 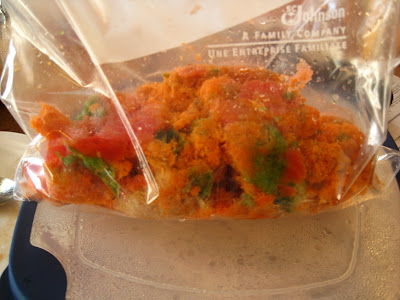 So, in wrap-up, my favorite item in juice so far – definitely a pomegranate, especially mixed with grapes, apples, and/or blueberries: 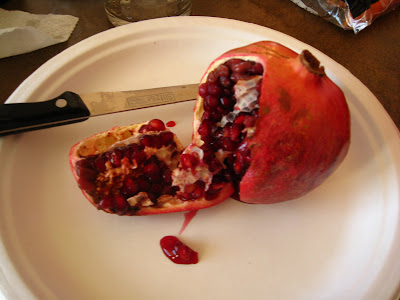 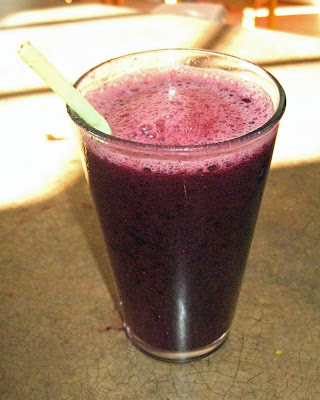 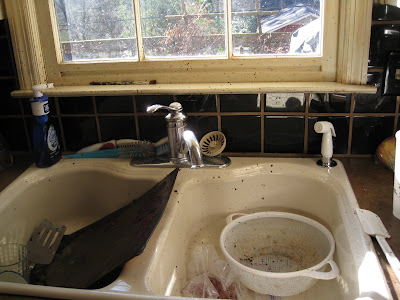 And finally, since I’m sure you’re wondering when I’m going to wrap up this post, no infomercial is complete without a video testimonial: