5 Minutes for Mom has a new photo contest!!!

When I saw that the sponsor was Prego and the theme was “Fun with Food”, I didn’t even have to scour my thousands of pictures – I knew the one!

We went to Macaroni Grill a few weeks ago, and I ordered Ali the grilled chicken, thinking that I didn’t really want to fight the pasta mess while out to eat (especially since she had never had spaghetti before). However, the “side” for grilled chicken IS Spaghetti.

At first I passed it off as “dip dip”, and she was dipping her chicken in the spaghetti sauce. But after a few minutes, she began to get curious about all of the twisty noodles underneath. I had eaten enough of my dinner that I finally said “why not?” and let her go at it, full force. And she had so much fun trying to figure out how in the world to eat noodles!! She would go from confused, to concentrated, to glee at her success!! This picture is during the “concentrated” phase and right before the “glee” phase: 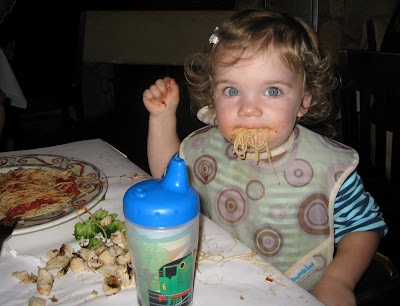 Notice the uneaten grilled chicken and broccoli, but the demolished spaghetti!