Today was the Alabama/Kentucky game. I had major trouble focusing because
a) I really think it was a boring game (or at least for a non-die-hard-fan), and
b) I was soooooooo sleepy.

I am pretty positive that the reason for my sleepiness was this: 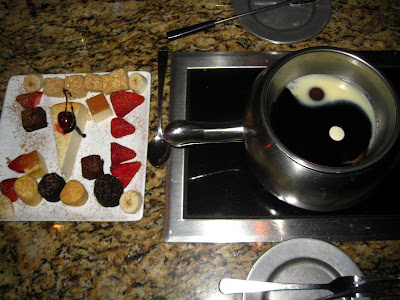 Yes, last night, Chris and I had a FABULOUS meal at The Melting Pot for my birthday (6 days early – opening the start of “The Birthday Season”). It was delectable, of course. But I seriously think that Nebuchadnezzar (or Mr. Nezzar, as he’s known in Veggie Tales) was making Daniel and the guys eat at The Melting Pot, which is why they were so much less energetic pre-their-new-diet.

Last night when we got home, I felt like the cheese and chocolate fondues were like glue in my insides, and everything felt sticky and stuffed – more like my whole body cavern was filled with molasses. And today, I have been so sleepy all day.

I think I’m going to not eat for a month.

But it was worth it. Getting to dip strawberries, bananas, cheesecake, brownies, pound cake, rice krispy treats, and white and chocolate marshmallows into white and dark chocolate is worth it alone, besides the fact the cheese fondue and the amazing array of 6 meats that we cooked at our table. Oh and the salad. OOOH I’m feeling sticky all over again.

So anyway, back to the game. I was so sleepy that I didn’t even take funky pictures like last time – this was the only picture that was taken, and it was taken by Chris: 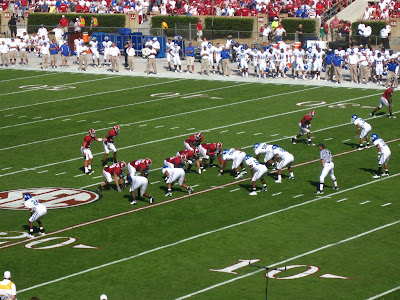 This is Chris’ 20th year to sit in our seats at the game (and my 10th year), and for all 20 years, the same two people – Linda and Wayne – have sat in the seats directly in front of him (us). So of course, we know them pretty well, as we look at the backs of their heads for three hours at a time at least 8 times a year. That’s what – like 480 hours of back-of-head-looking? Anyway, Linda mentioned today that her husband thought he saw Chris the other day, but she knew that was highly unlikely. Chris asked where, and he said on (a road near our house). Chris said, “Yup, that was me. We live one road over from there.” Then Linda said “You live in (insert our neighborhood name here)?!?!?! So do we!!” – – they live two streets up from us!!