So yes, the main reason for our trip was the football game, and yes, I’m just now getting around to blogging about it. But COME ON. . . with the other two adventures we had this weekend, who could help but put football off for a couple of days???

Which means, if it is Tuesday morning and you are one of those people who read my blog while (pretending to) work and so therefore missed all weekend because you weren’t (pretending to) work, I highly recommend reading Saturday and Sunday’s blogs first. I promise you won’t regret it.

Now, if you’re reading this football blog in hopes of a play-by-play analysis of the game, you WILL be disappointed. This is a girl’s-view-of-football. Sorry – it’s the best I can do.

This was a monumental game for me, because:
a) it was the start of my tenth season of attending the games. Hard to believe. And yes, I do know what a first down is. Actually, I learned that during the second season. Now I even can pick out a foul or two before Chris explains it to me!!
b) this was my first game away from Bryant Denny or Legion Field – fun!
c) this was mine AND Chris’ first 50/50 split game (where each team gets half the tickets) which made for a fun atmosphere.

So. Let’s start with the important facts.
#1 best feature of the game: 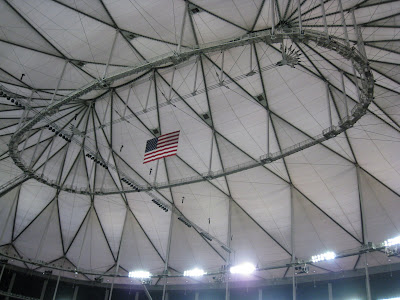 The Ceiling. AKA Air Conditioning!! I actually got cold at a football game in AUGUST!! How cool is that?!?!!?
#2 (close second): Cup holders!!! No kicked over drinks raining down on my legs from the row behind me!!
#3: Rows wide enough to get by people without stepping on their feet. Two years ago when I was super pregnant, I think I bumped every person on our row at Bryant-Denny with poor little Ali at least 3 times a game, due to having to go to the ladies room so often. It was bad.

OK. Now that we’ve got the top three out of the way, back to the story.

We find our section and Chris escorts me to our row, then heads back up to get us cokes. I sit in my assigned seat, #6. However, I quickly made the executive decision to swap seats with Chris in order to sit next to Mister Octogenarian rather than sitting next to already-drunk-frat-boy-named-Will who was very eager to get to know me. I swapped just in time too – I was just barely out of reach of his uncoordinated grasp when he tried to grab me to dance as “Sweet Home Alabama” came on.

Luckily, Mister 80-year-old did no such thing. He DID, however, surprise me and whip out a Blackberry to email someone several times during the game. Old people are getting younger every day. Mammaw, I’m getting you a Blackberry next Christmas. Not this Christmas, because you’re getting a Wii.

And, by the way, Frat-Boy-Will was drinking beer – served from the stadium!!! I thought this was against the rules in College Football. Apparently not. I gave this some thought and hypothesized that maybe it would actually keep all of the college students from getting as drunk if they can buy beer at the stadium, because they’re not smuggling in a purse, bra, hip flask, and pocket full of Jack Daniel’s Minis. Then I happened to look under the chair in front of me. 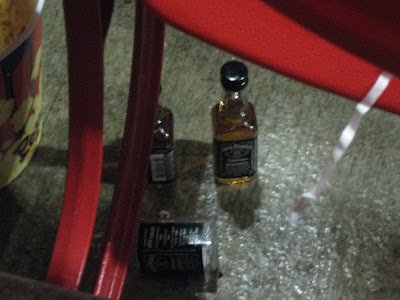 Now for a few fashion observations:

I believe that these Alabama girls may have gotten outfit ideas from the Greek Belly Dancers. 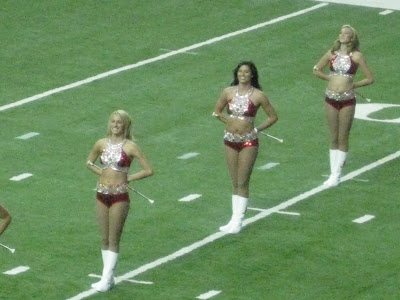 . . .And these Clemson girls escaped from Dragon*Con. 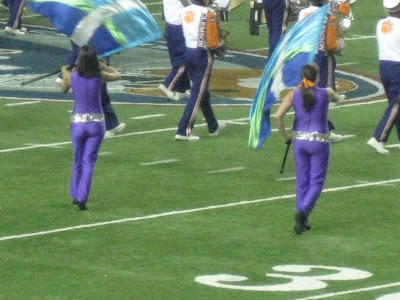 Oh yes!! And here’s a picture of Chris and I – be sure to notice my new shirt that is going to be famous, thanks to crazie-t-shirt-maker-who-photographed-it-so-that-he-can-sell-the-idea!! 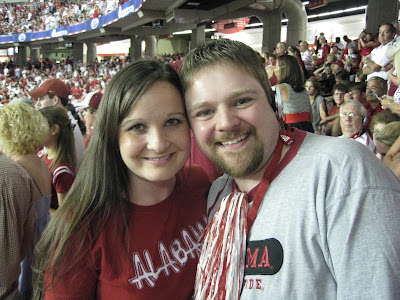 If you’re wondering what is so innovative about my shirt, the white part is underneath the red, and the red is cut out and stitched around the white. Hard to explain, as the crazie said).

Here’s a picture of the real Million Dollar Band (as opposed to the crazie version) and the Clemson band playing the National Anthem together: 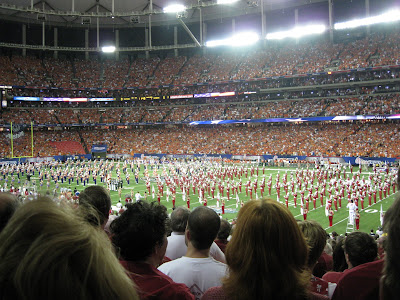 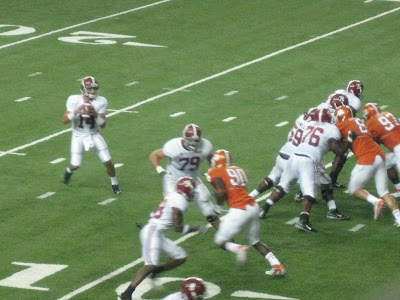 Obviously, it was a great game and had many moments to jump up and scream. Or, just scream anyway, as it seemed that everyone but me wanted to stand up the whole game. I stood a lot, but also sat and watched the jumbo-tron sometimes, which elicited this snipy, sarcastic remark from the lady in front of me: “You REALLY like football, huh?”. To which I replied, “Of course! Just not quite as much as all of you do.”

I also spent a good bit of time trying to spot Barkley’s husband and Dad, who were also there. I texted Barkley and asked where they were sitting. She responded: “In the Alabama Endzone four rows above the Chick-Fil-A sign”. Did I mention that this was the Chick-Fil-A bowl??? The word “Chick-Fil-A” was repeated approximately 357 times in that stadium. But it was a fun diversion to search for them when I got bored with Football (several times).

I was pretty sure I had found him, thanks to the 15x zoom on my camera (third guy on the second row with the dirty white hat, tilted back screaming). . . 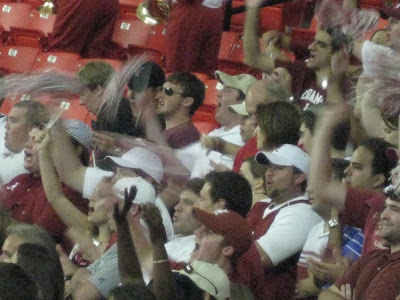 . . .but began to doubt myself when I got this picture of him later in the game. . . 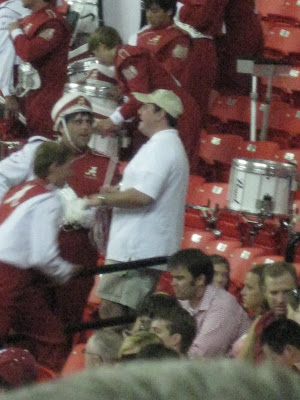 Whaddya think, Bark?? Looked like him to me. But alas, after the game we walked over there, and close-up, no luck. Definitely not Jeremy.

At halftime, there was an marriage request: 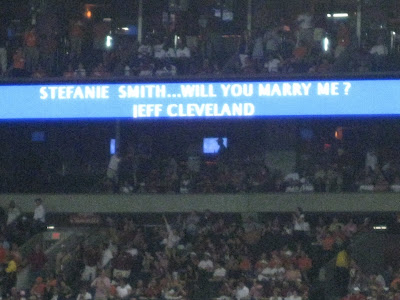 I love how he felt like he needed to sign his first and last name. Just in case Stefanie thought it was another Jeff asking her to marry him.

However, she said yes. 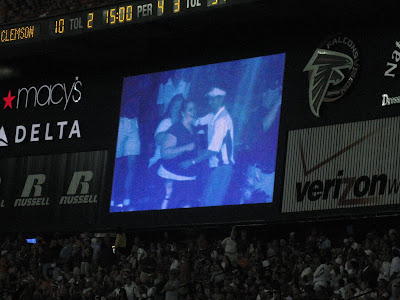 This incident reminded me once again to thank Chris for not proposing to me at an Alabama game.

During the fourth quarter, Chris was above thrilled (he was hoarse by the end of the first). He finally quit biting his nails and chewing on his gotee nervously, and was elatedly comfortable in our victory (and that Clemson wasn’t going to come back miraculously thanks to Alabama choking), so he wanted a shirt to celebrate. Being the kind, generous, bored-with-the-game wife that I was, I offered to go get him a shirt: 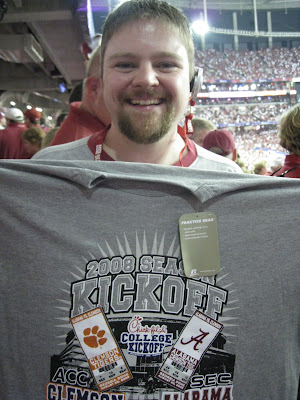 And. . . he had to take pics of the difference in the amount of Alabama and Clemson fans still in the stadium with 3 1/2 minutes to go: 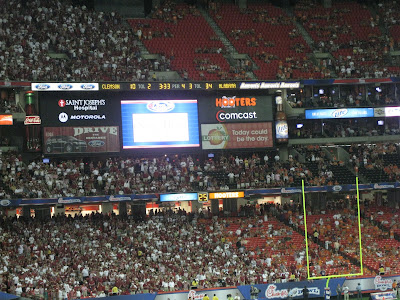 Of course, there was much cheering and jeering and chanting at the few, poor Clemson fans that were left. I’m not sure why they stayed to take that punishment, but I salute you, glutton-for-punishment-Clemson-fans.