I never envisioned my life to include caring deeply about a giant slab of living snot.

But here we are.

Not only do I have one pet giant slab of living snot, but I actually have five adorable pets. And I do care for them very deeply.

A SCOBY is the stuff of my children’s nightmares. Literally. When I first mentioned that I was going to attempt to make kombucha at home, one of them gasped and the other squealed.

SCOBY stands for Symbiotic Culture of Bacteria and Yeast. And it’s just as nasty looking as the name implies. 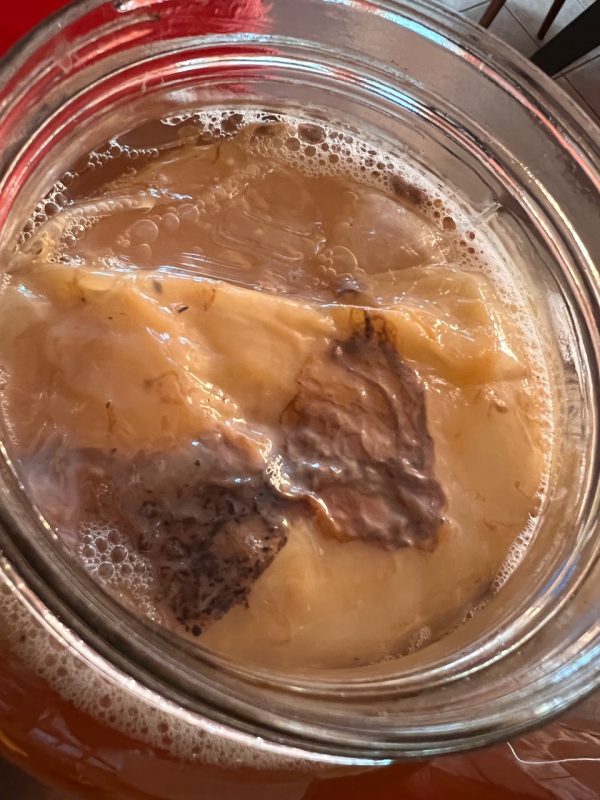 My kids learned about SCOBIES  before I did by a weird and somewhat questionable episode of the Disney show Jessy. After I decided to acquire my own SCOBY, they made me sit down and watch the episode with them to ensure that I really knew what I was getting into. It did not change my mind, nor did it infect my dreams like it had done theirs.

So why, I am sure you are wondering, am I caring for slabs of cultured snot?

For many years, I’ve enjoyed a bottle of Kombucha now and again. But it’s an expensive treat, weighing in at $3-4 a bottle. Sure, it says it has health benefits – but does it really? And if so, are they worth the price? Or is it just an expensive and a little weird drink?

This year became the year to find out.

I ordered my first Kombucha Kit off of Amazon, as one does. It included the gallon jar, a starter amount of tea and even sugar, a few other miscellaneous tools, and a live and thriving SCOBY. 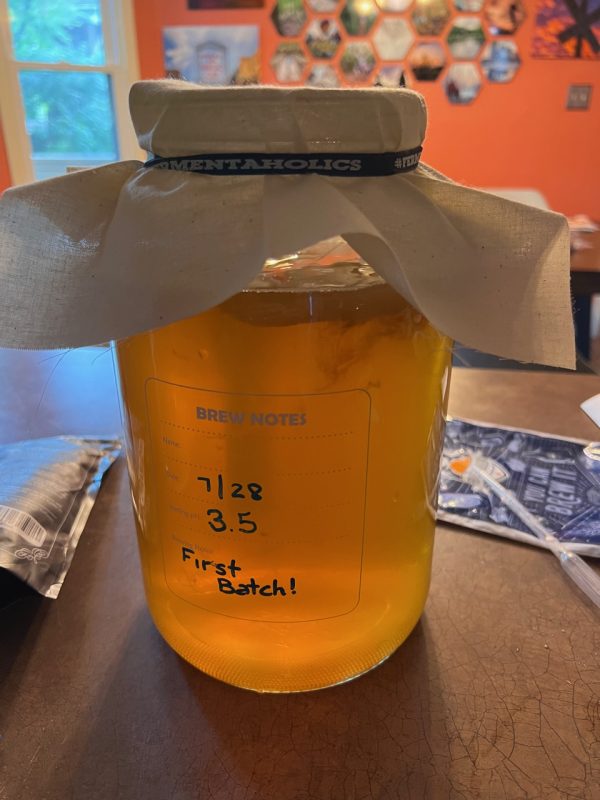 I was beyond excited as that first batch spent seven days in the first fermentation, then two more days in the second. And the seven bottles of kombucha it created were quite incredibly delicious – I had discovered a new and exciting world of cheap (10% of the grocery store cost), delicious, homemade kombucha that felt like a fun craft project, except that I could drink it. 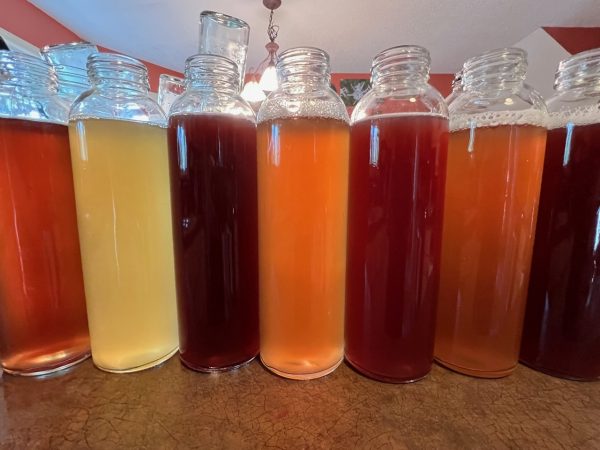 Then, while making my second-ever batch of kombucha, I managed to kill my SCOBY.

It had grown mold on top of it, which means that the SCOBY and all kombucha must be tossed immediately. It hurt me deeply as I dumped the entire jar into my garden. I shed a tear. I said a few words. Then I went to the internet to figure out how I’d become a murderer.

“They’re nearly impossible to kill”, says the internet, “except don’t do this and this and these other 100 things and make sure you do all these things correctly and do not look your SCOBY in the eye and make sure you play its favorite music and no we can’t tell you what that is you have to figure it out yourself.”

In the postmortem, I was able to deduce that I managed to kill my SCOBY by making the tea with the wrong kind of sugar. Who knew that turbinado sugar was not the same thing as cane sugar? I didn’t. Turbinado contains molasses, and SCOBIES do not prefer molasses. They would rather die.

I was legit sad that night, as if I’d killed the family pet. (The family pet that everyone in the family was disgusted by but me, but still.)

But the next day, I doubled down.

I researched and ordered what claimed to be the strongest, sturdiest SCOBY on the internet. Actually, I ordered five of them. And four more gallon jars. I was confident in my success and ready to exponentially increase my production. At least if I killed a SCOBY, I’d now have backups. I just needed to manage not to kill five SCOBIES at once. I brewed their first batches, blessed them, and let them get to work.

Kombucha processing is a multi-step process, and it’s not exactly a process that’s easy to do without making a mess. 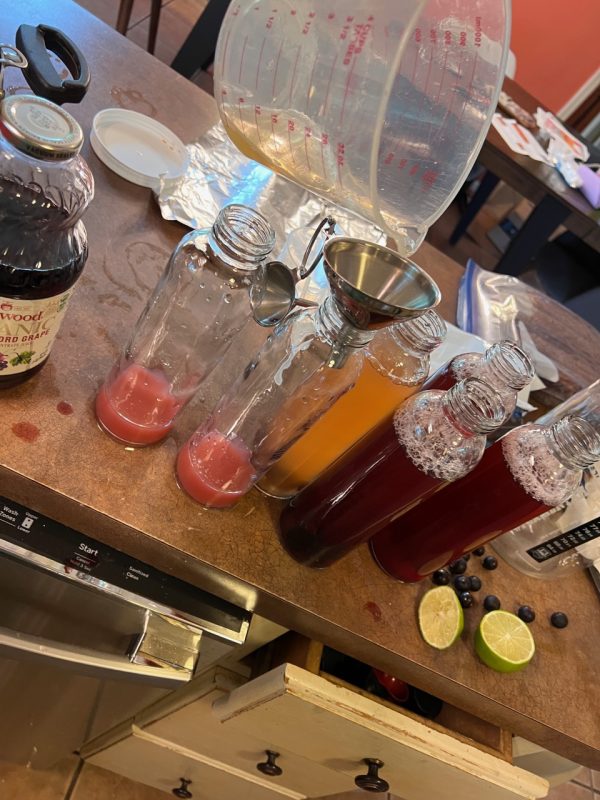 There’s also a good bit of multitasking that becomes necessary to efficiently process five gallons at once. 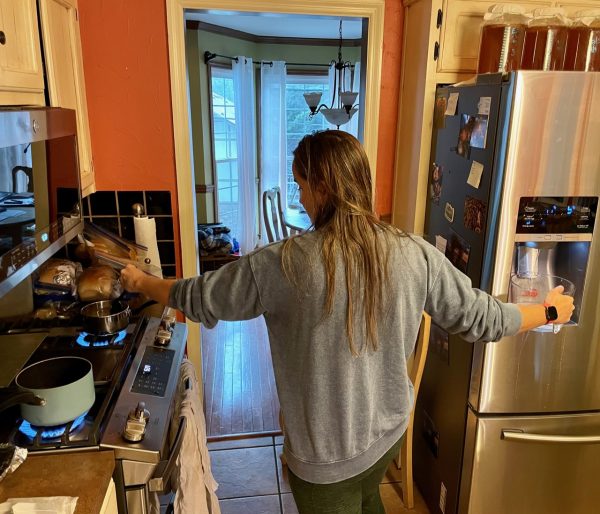 …and (more than) a few containers needed. 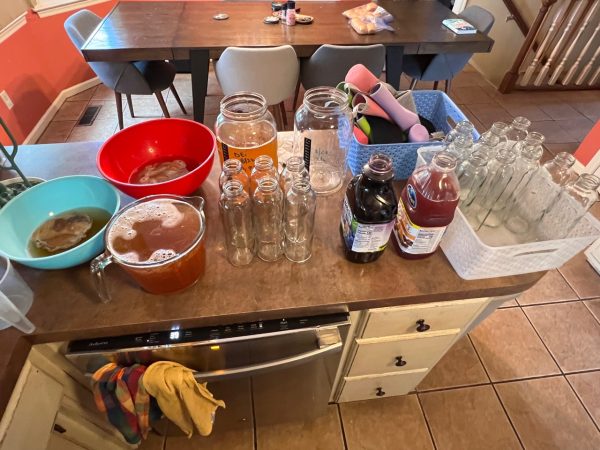 There’s also experimentation. Which fruit juices taste best? Are juices better, or fruit puree? Should you add herbs such as mint, lemongrass, or rosemary? 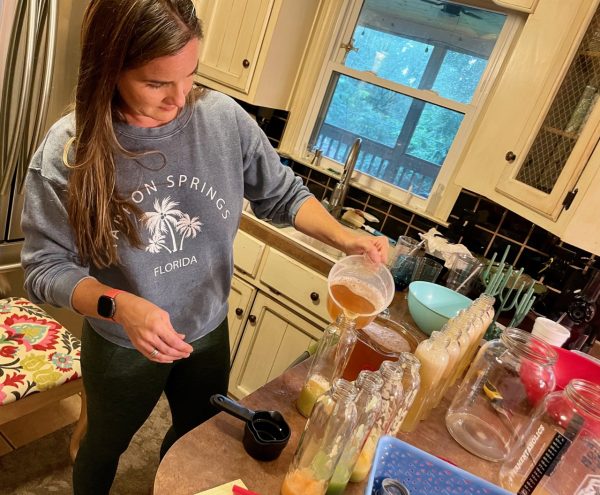 (Pro tip: never use cantaloupe puree. Kombucha enjoys it so much that when you open the bottle it will fizz out perpetually until the bottle is empty. Or maybe it hates it and its trying to escape the cantaloupe. At any rate, don’t do it.)

But the challenge, the crafty perfection, gave me joy and passion. 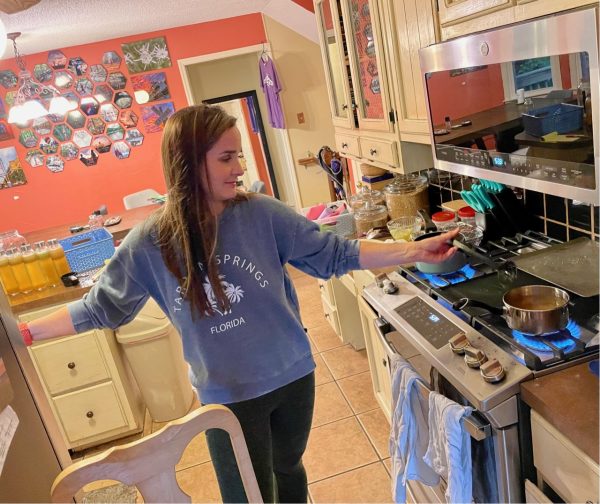 Even when one of my SCOBIES decided to give off a decidedly rotten-egg-poot smell, my passion was not diminished.

Okay maybe that smell didn’t bring me joy, but the chemistry challenge of it did.

To track down the eggy-flatulence SCOBY, I decided that my SCOBIES were going to have to be named. This way, I could label the finished product according to their SCOBY-Daddies, then track back the foul-smelling drink to uncover the naughty SCOBY.

By this point I was already supplying four other friends with Kombucha (because I overshot my production, or I had wrongly counted on my family to decide to like my kombucha), so I picked out a few names myself and crowdsourced the naming of the last couple SCOBIES.

We ended up with Toby, Moby, Scoby Doby Doo, Linda, and Rufus. 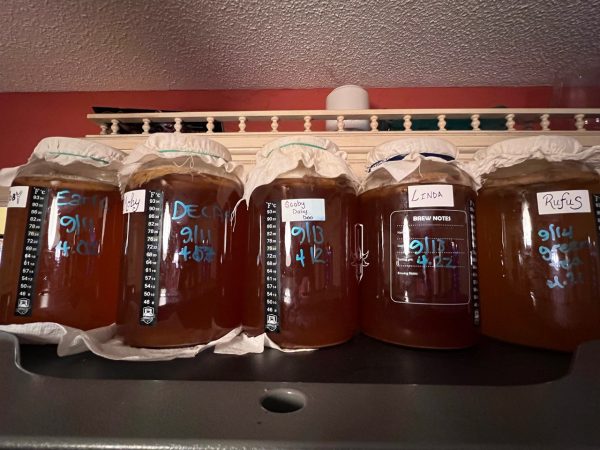 I just thought my SCOBIES were pets before. As I sat and made each of their unique nametags, I felt kinship and maternal feelings for them that had yet been undreamed of. 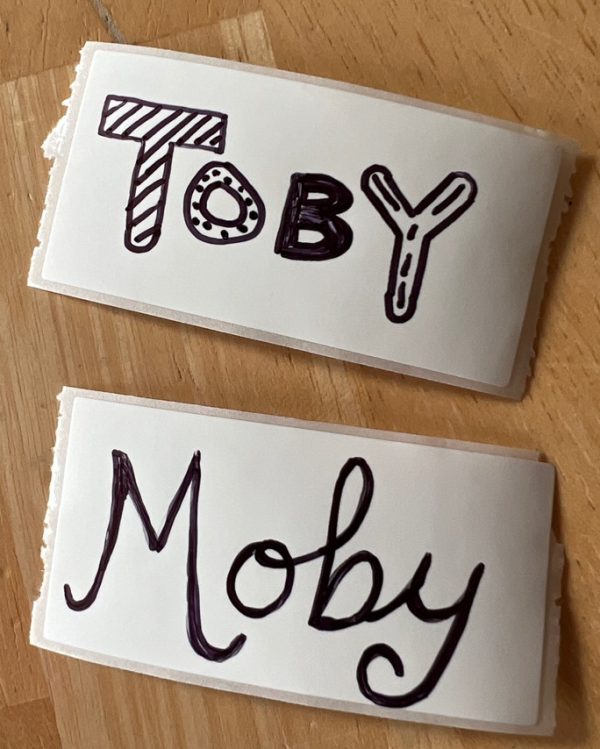 The eggy crime was able to be traced, and the culprit was Toby. But with a careful splitting of his SCOBY and a  move to a high-risk-high-reward Earl Gray Tea feeder, Toby reformed his ways, quit giving off eggyfart vibes, and is now unanimously the most beloved SCOBY of the family.

It’s really a heartwarming enough story to qualify for his own Hallmark movie.

As I got more confident in my kombucha making, my labelmaking went on an evolutionary journey, becoming more and more fancy – to the point where I might enjoy the labeling more than that kombuchaing. 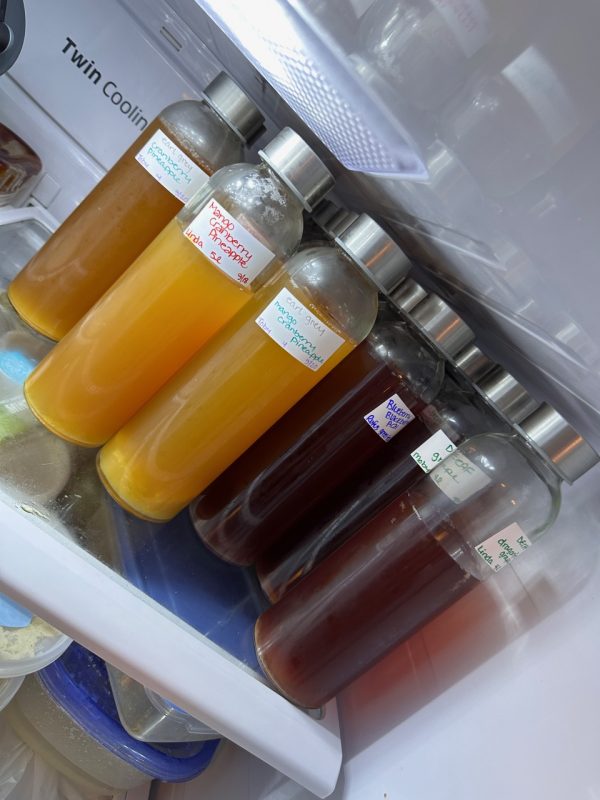 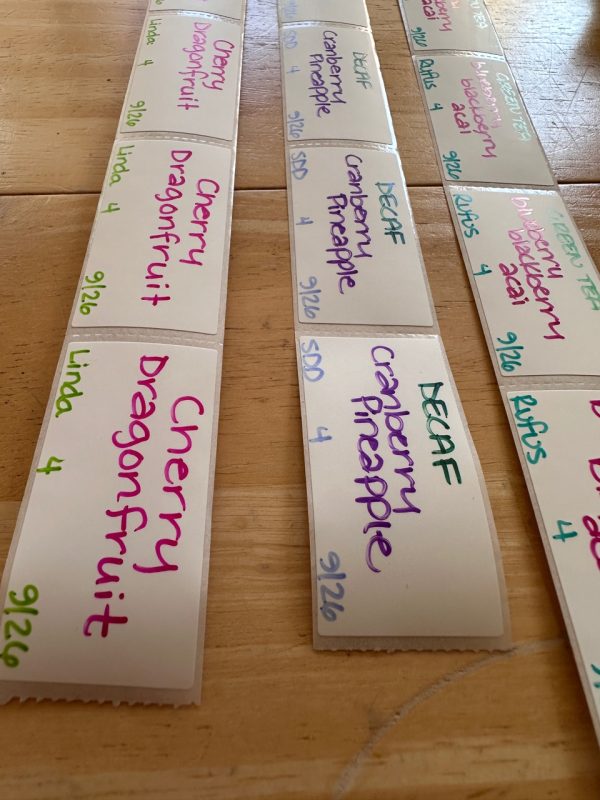 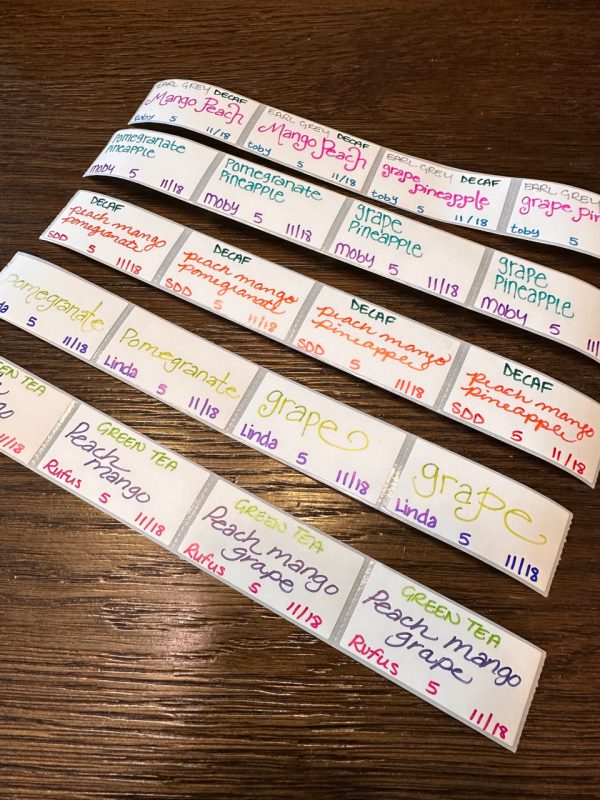 And my recordkeeping, supposedly for the purpose of identifying the best flavors / time elapses / SCOBY split intervals, well, y’all know me well enough to know that over-the-top recordkeeping is how I roll. 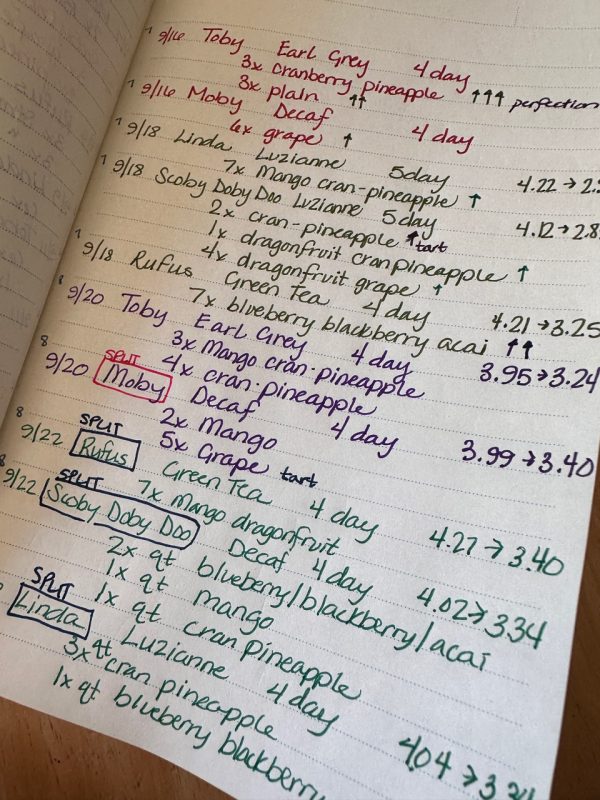 I’m four months about 125 gallons of production into my kombucha journey, and am still enjoying it immensely. Other than the occasional disaster, such as my first exploding quart (Scoby Doby Doo was feeling really frisky that week), 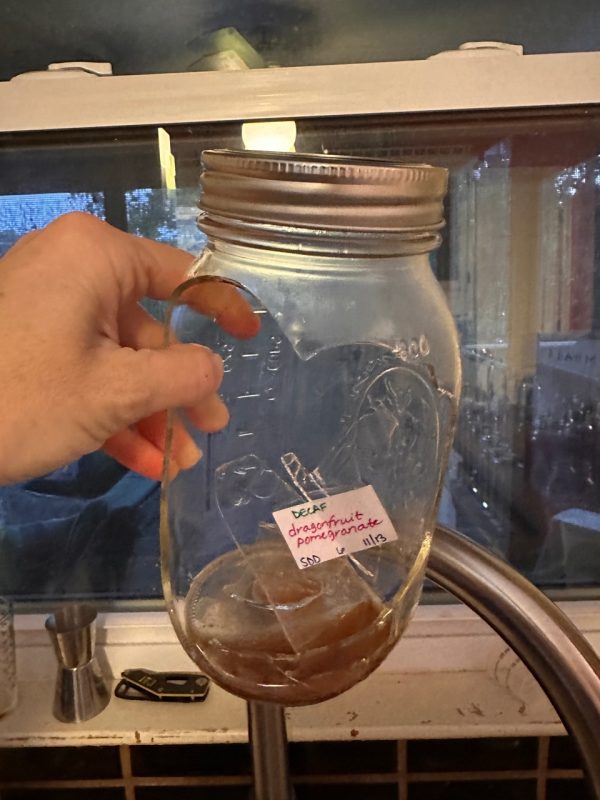 it is now streamlined to where it takes about two hours a week to produce five gallons of kombucha. And each bottle of kombucha costs around 35 cents to make – which is quite the savings over the grocery store prices.

And if I may say so, the output of Toby, Moby, Scoby Doby Doo, Linda and Rufus tastes LEAGUES better than commercial kombucha.

I am by no means an expert, and am probably doing any number of things wrong, but I have kept five SCOBIES alive and thriving for quite some time now, so here are my steps, in case you’d like to make your own: 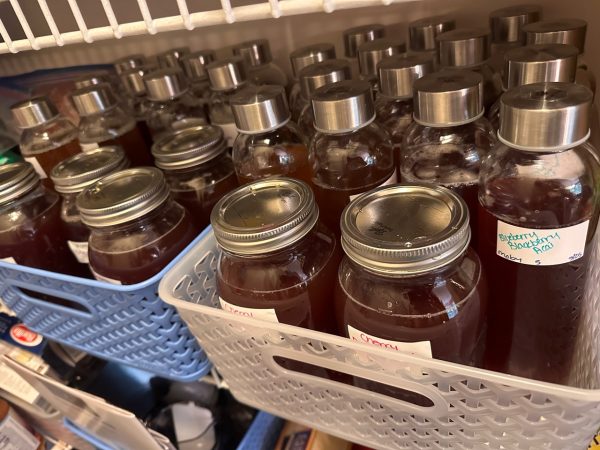 (And don’t forget to make pretty labels and keep a good journal (or baby book?) for your SCOBIES. Because what’s the fun of crafting kombucha without good recordkeeping?)

Edited to add: What are the benefits of Kombucha?

The internet will tell you all sorts of things, and some may or may not be true, so do your own research. Primarily, it is fantastic for gut health. It contains probiotics and antioxidants that help replenish the gut environment. I believe it is also helpful to the immune system and reduces inflammation. The internet, however, will also tell you it prevents cancer and heart disease and diabetes and everything else possible – I don’t know about all that. But I’ll take it if it does!