“That’s a strange sound. What is it?”

It was 10pm at night. I got up and walked behind Chris, out the screen door of our back porch, and onto the unscreened part. I wondered briefly why I was the one investigating the metallic knocking noise, but I am the nosier one of the two of us, so it made sense. And also, I’d heard the noise earlier in the night – but when  I was inside with Ali. So clearly whatever this knocking was needed to be investigated.

I stopped. I listened. There it was again. I craned my ear toward it. The knocking got louder.

“Um…there’s actually something in your grill.”

Therefore he should be the one to uncover the grill and figure out what had inhabited it.

“Yes. It’s definitely inside the grill.”

Chris skeptically walked out the screen door, seemingly unbelieving in my ability to ascertain the truth of the matter. But the insistent and loud knocking proved my point quickly. And my assumptions about who should uncover the grill seemed to be unanimous.

After all, it is his grill.

Chris circled the grill nervously, wondering at which end to start the unveiling process. We both expected the squirrel from Christmas Vacation, ready to flail itself at our faces.

He reached as far as he could, picking up the grill cover with two fingers.

He slowly opened the lid of the grill, and there was nothing. Then he lifted the lid so we could see the underside – maybe it was a bat?

We both looked with trepidation at the storage cabinet below the grill.

It was all that was left.

Whatever was knocking had to be in there. And we couldn’t put off discovering what it was any longer.

He opened one cabinet door.

Then he opened the remaining door.

…Loudly and with a remarkably more southern accent than I would if, say, I hadn’t been suddenly staring at a possum.

“There’s a POSSUM in your grill!!” 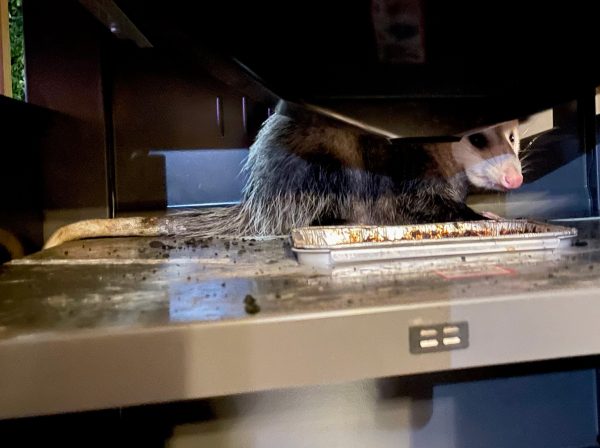 And all of a sudden we were living The Most Alabama Moment Ever.

He leapt out of the way.

The leaping, however, was unnecessary, seeing as how the possum was not going anywhere. He seemed to be under the impression that we’d opened the wrong apartment door and we’d soon realize, with shame and embarrassment, that it was his place and not ours.

Chris grabbed his grill brush and began banging on the metallic backing of the cabinet, sure that the strong hint of unwelcomeness would make our guest leave.

It did not. He did not even blink, if possums blink. 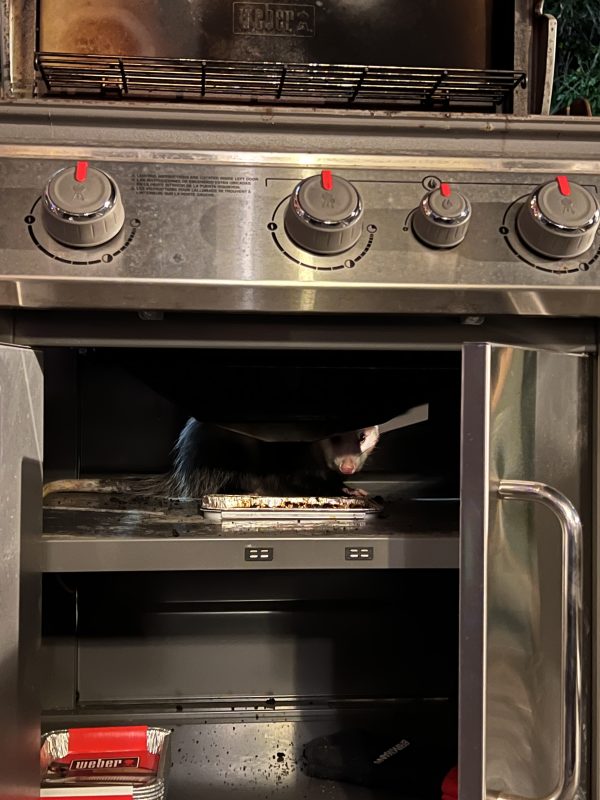 Chris didn’t want to get possum hair on his grill, so he wouldn’t touch the possum with the grill brush.

So Chris went inside and retrieved a broom, then began poking the intruder with the broom handle.

Other than opening his mouth in a toothy rebuttal and gnawing on the broom handle as if it were a welcome-to-the-neighbhorhood Tasty Treat offered by his new neighbors, nothing happened.

Okay fine, he doesn’t respond to aggression, but surely wild animals, once discovered, don’t just sit there. It was time to give the possum the opportunity to take our hint and leave on his own good possummy humor while Chris asked the internet how one convinces an overstaying guest of the possum ilk to leave.

So we spread the cabinet doors wide open and retreated to the screened-in porch, certain that he’d take the opportunity to show himself out.

“Opossums have a strong sense of smell that they use to locate food. You can use this to your advantage by deterring them with scents they dislike around areas they frequent, such as camphor, garlic, onion, hot peppers, molasses, wolf’s urine, ammonia, and pet fur.”

I’m sorry, but who stores their Wolf’s Urine right between the molasses and ammonia? Maybe we’re not as Alabama as we feared.

But just in case, we checked the spice cabinet: we had a decided lack of Wolf’s Urine.

Instead, Chris got out his bulk-sized hot sauce and was ready to advance to Round Three.

He showed the hot sauce to the possum. Maybe he can’t take a hint but he can take a threat? 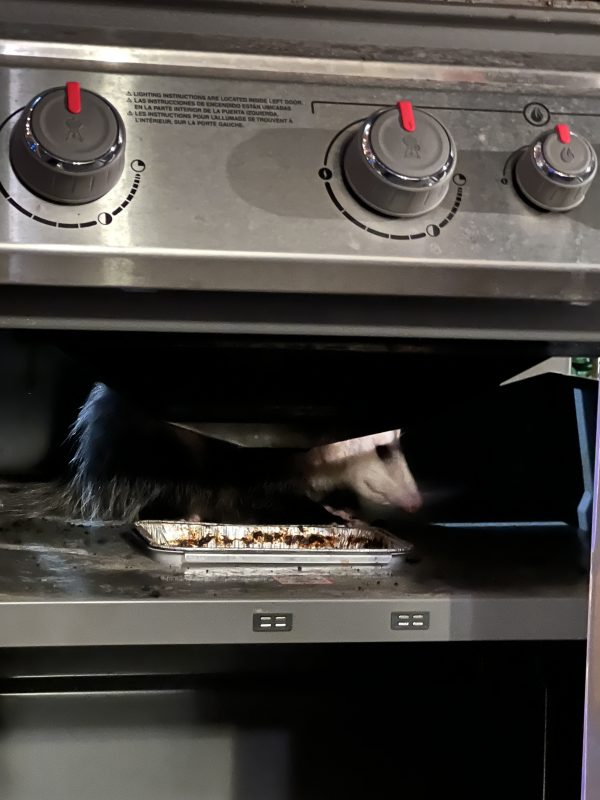 The possum thanked him for the condiment and implied that it was a fantastic housewarming gift to his apartment.

So now we had a grill that contained

a) a squatting opossum,

b) splashes of hot sauce, and

Chris had a large aluminum grill drip pan on that shelf with the possum. Last time he grilled, it was 3/4 full of Conecuh sausage bits, grease drippings, and general grilling castoffs.

Tonight, it was empty. Licked completely clean. Our new friend had to have ingested at least 5,000 greasy calories.

So we actually had a possum sitting on an about-to-blow emergency belly situation in our grill cabinet, surrounded by splashes of hot sauce.

We sat and strategized again. The night was getting later – it was now 11pm – and Chris did not want to go to bed with a possum in his grill.

So he went inside and found a squirt bottle. He filled it with water – not hot sauce, nor, regrettably, wolf’s urine. He came out with a slightly-terrifying determined look in his eye. This possum had kept us from bed for too long.

A combination of broom handle thwunks, water-sprayed in eyes, and war cries convinced the possum to remove himself from his apartment.

But not….the grill. He was now hanging on the outside of the grill, under the cover where we couldn’t see him, determined not to relinquish his squatter’s rights.

Then when the thwunking and spraying abated, he crawled right back in like the rather inconveniencing fire drill was over.

The thwunking and spraying picked back up. He vacated again. And finally, slowly, annoyed and with the general air of a possum who thinks his neighbors are excessively inhospitable, he ambled down our back stairs, and slowly pulled his full belly into the wild area in our backyard.

Except that it was now 11:15 at night and Chris had to clean up hot sauce, an empty grill drippings pan, and a rather watery possum poop, left presumably as a parting shot. 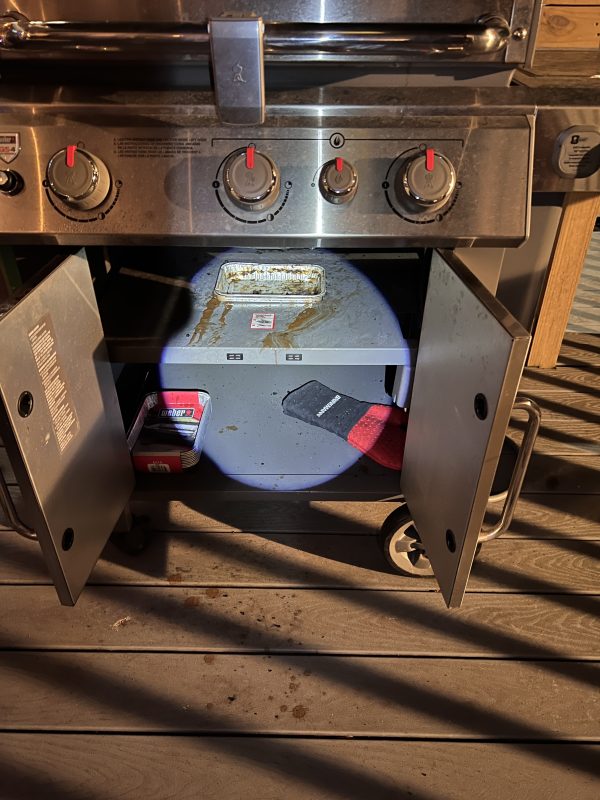 Just another late night in Bama. Walker Hayes, you go ahead and feel free to turn this into a Viral TikTok Country song.

2 thoughts on “Just Another Late Night in Bama.”