For every summer since first grade (except for 2020 … which as an aside, the phrase “except for 2020” should be a given addendum to nearly any sentence about anything), Noah has attended two weeks of day camp at our church, Camp Adventure.

It is the most exciting, fun, delightful 70 hours of Noah’s entire year.

Camp Adventure regularly wins “Best Summer Camp” ratings in Birmingham because of the incredible amount of work and creativity put into it to make it the dreamy camp that it is. Every week has a different theme such as Spy Camp, Creative Camp, Build Camp and more, each having its own unique set of applicable contests, celebrations, and activities.

This year, Noah got to attend three weeks. One Hundred and Five Hours of Bliss, which included moments like these, 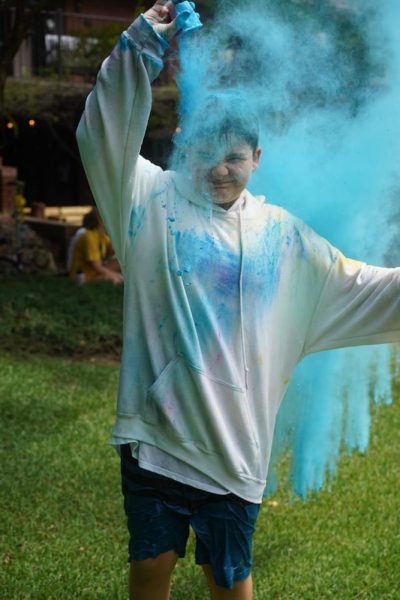 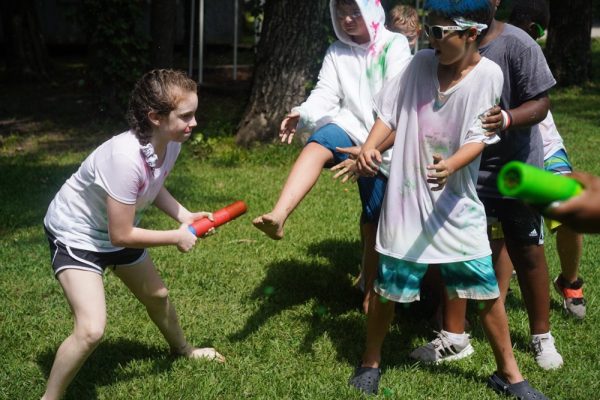 and a brief moment of Noah-Celebrity (and, incidentally, me-celebrity-by-proxy), when he got to take part in Bread Day:

(Bread Day apparently has a long and winding inside joke of a story that is now camp legend. I was happy to contribute when Noah begged me to let him take a bag of rolls to camp. I was not expecting those rolls to turn my son into a rock star.)

So. Camp is fantastic. Camp is wonderful. 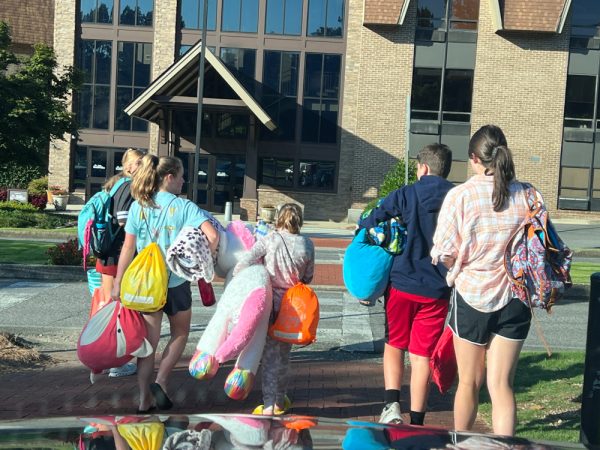 Camp even inspires such purchases as Fish Flops in order to increase ones Camp Clout. 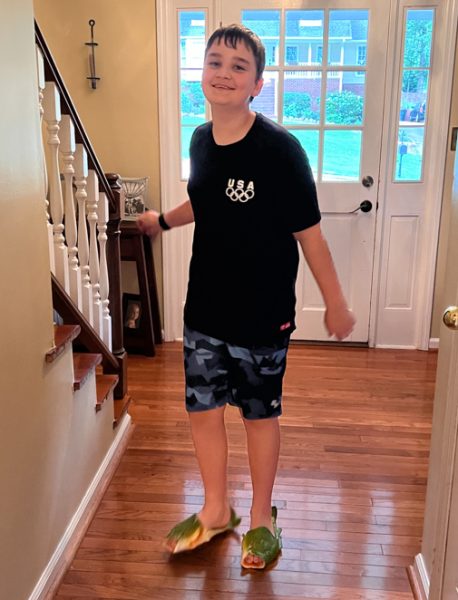 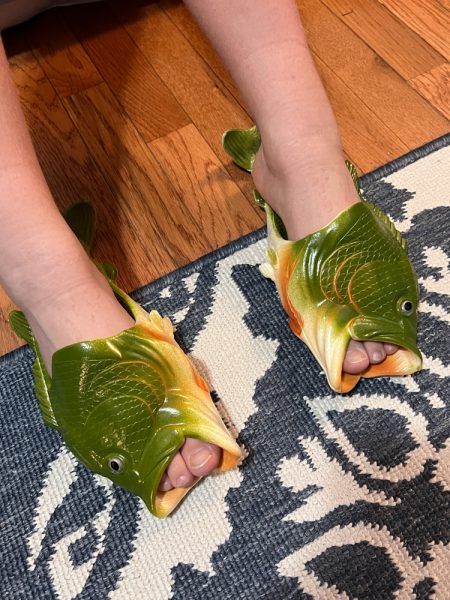 (Okay we could have done without that.)

But the real problem is that camp does not last forever.

And since Ali was volunteering at camp for the second year, she was camp-busy for more of the summer than Noah.

And so, after the extra five minutes it took to sleep off the camp exhaustion, 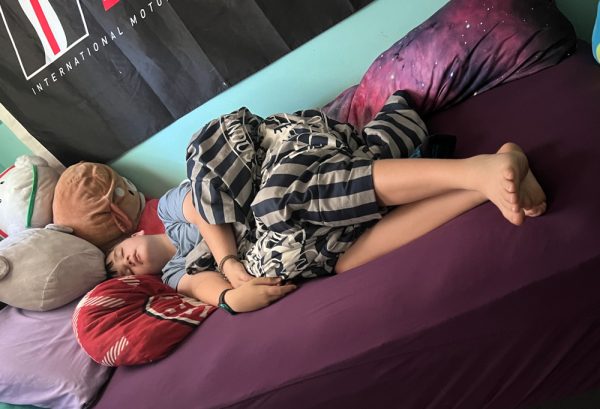 Noah was sad-bored and dreaming of happier camp days. 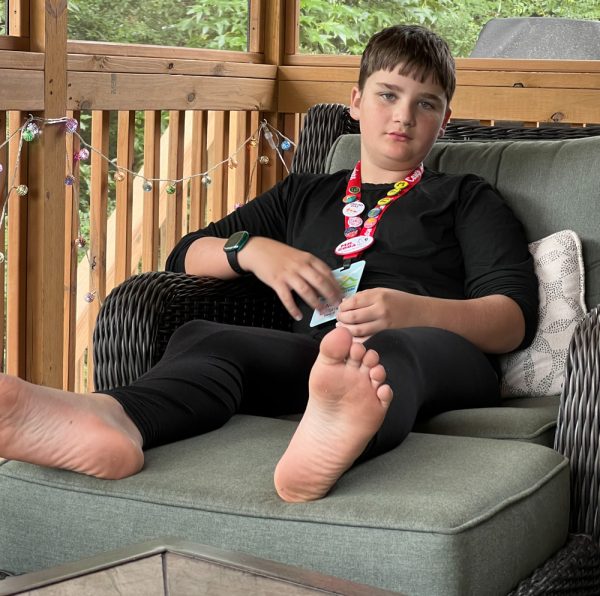 And one can only stack chair on top of unstable chair to amuse oneself for so long. 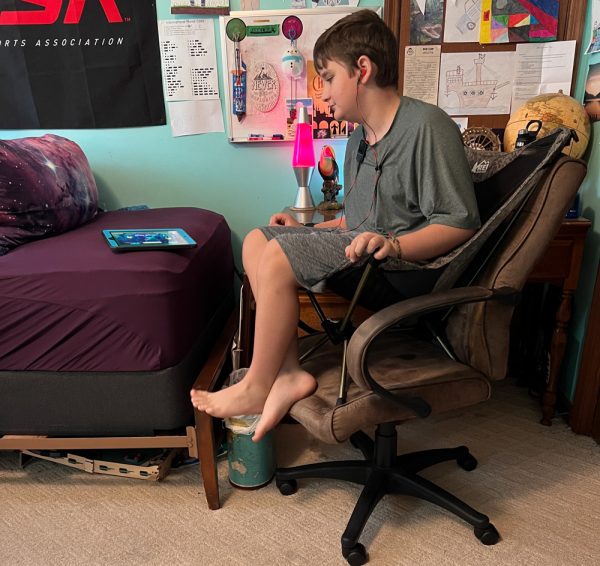 And furthermore, mothers seem to have zero compassion and understanding of this concept of Camp Hangover.

So Noah channeled his Father’s engineer-problem-solving mindset and set to work on solving his camp hangover boredom. He asked me if he could have a couple of boxes and disappeared into his room for many hours.

That afternoon, he invited me up to check on his progress.

It was, he explained, The Summer Fun Machine. 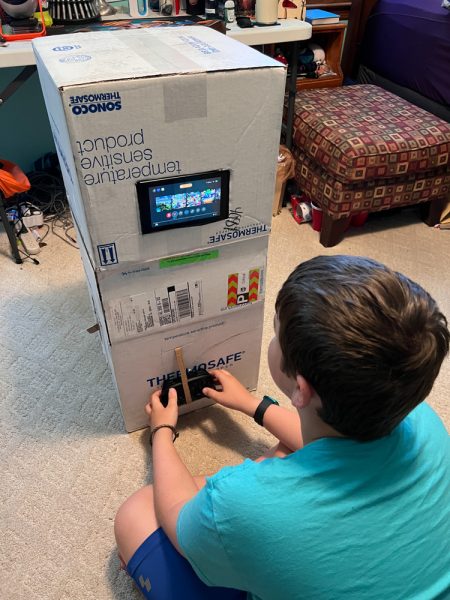 In retrospect, I have to admire his vision and his belief in the continuing design.

Because although I was impressed with his construction, all that I saw in Version 1.0 of The Summer Fun Machine was a hilarious irony that he took a Nintendo Switch, a video game system that prides itself in its portability and removal from the need for a stationary television, and made it stationary and unportable. 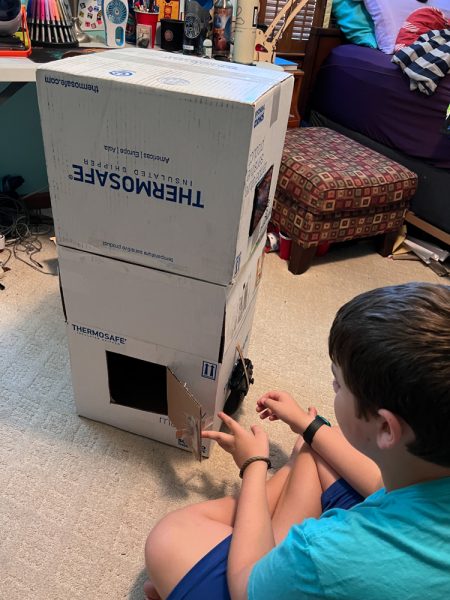 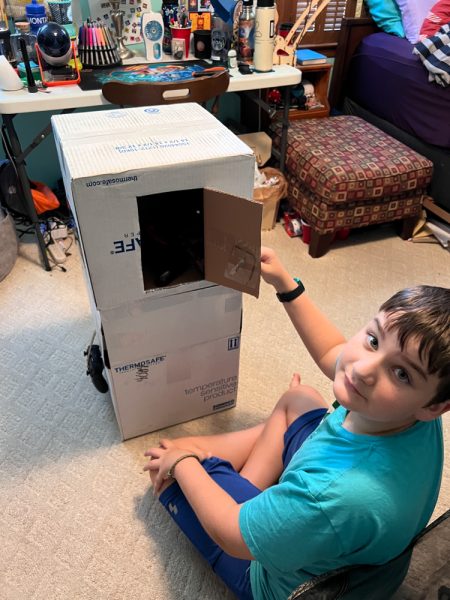 The storage compartments held the switch components and various games, along with his iPad, to play music while he gamed.

But he knew he could do better.

The next day, the first step of SFM Version 1.1 was to work on aesthetics. So he covered the box logos with paper, with his own hand-drawn logos, and with screenshots of the games that one could play on the SFM. 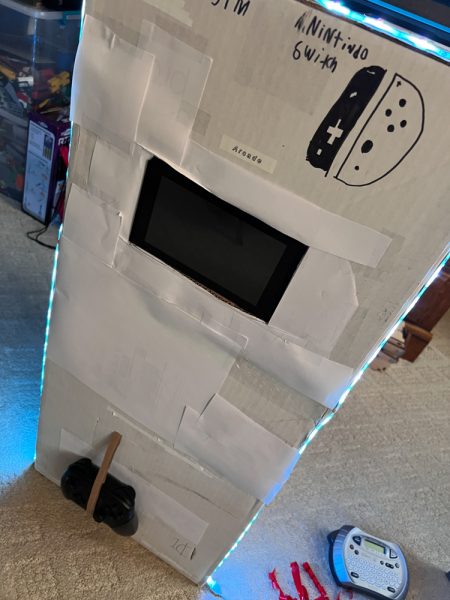 He also added a top hatch at this point for the iPad to make it more accessible, and put a bluetooth speaker in the hidden compartment to project the tunes. Also, if The Summer Fun Machine was going to reach its full potential, it was officially time to pull out the All-Purpose Tool Box. 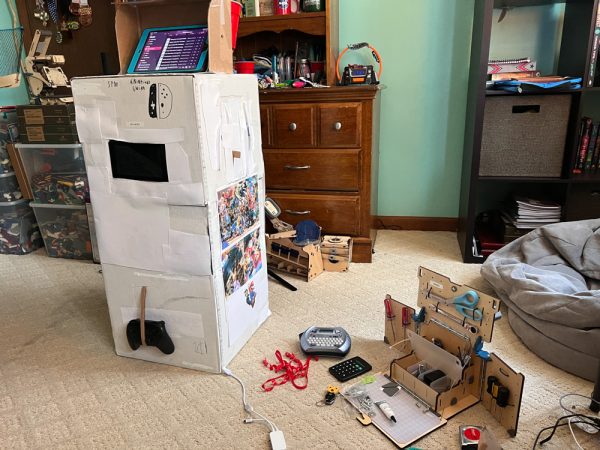 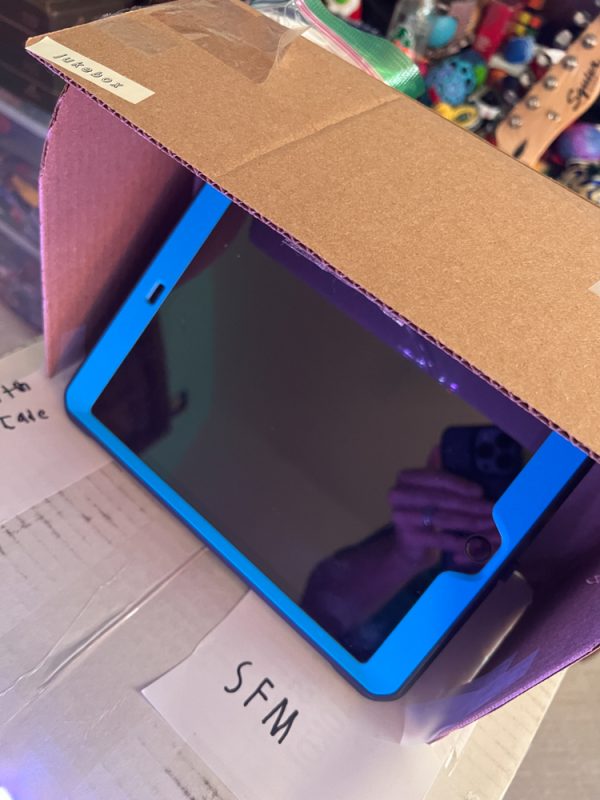 Version 2.0 began branching out in its consideration of consumer needs. For instance, one cannot truly enjoy Summer Fun without refreshment, so a candy dispenser was added to the back 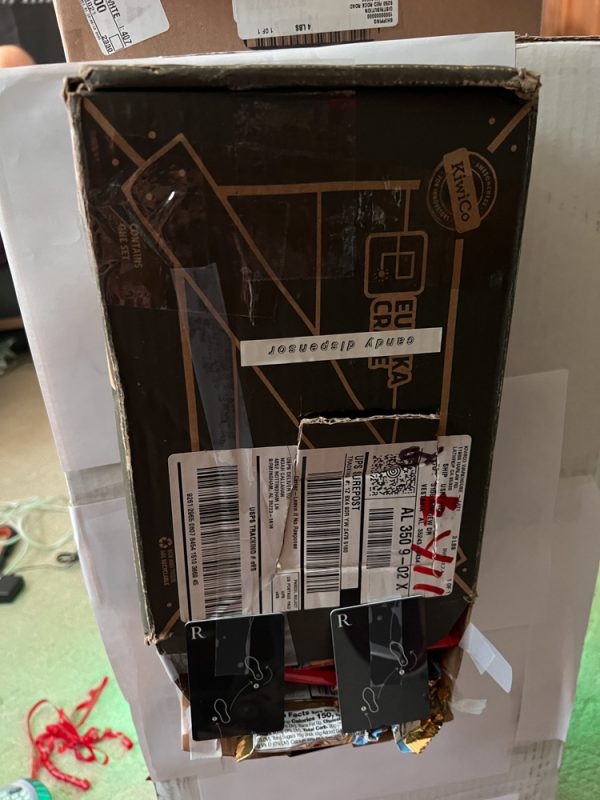 (Old hotel keys are perfect flaps to allow only small amounts of candy out at a time.)

And one cannot enjoy candy responsibly unless one has a) a trash can, and b) hand sanitizer, to remove the sticky from one’s hands before touching the video game components. (I’m not sure that is an actual task that hand sanitizer is meant to accomplish, but a mother should not question the schematics of an SFM.) 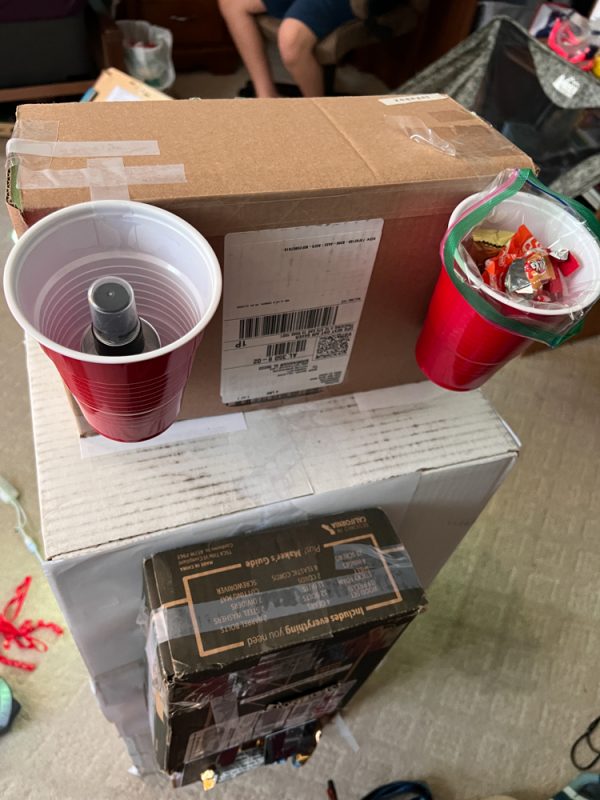 He took a moment away from the project to regroup and plan, setting some goals and drawing some schematics, this time with the help of his father (lest you think Noah’s handwriting is as passable as the handwriting on the left side of the page.) 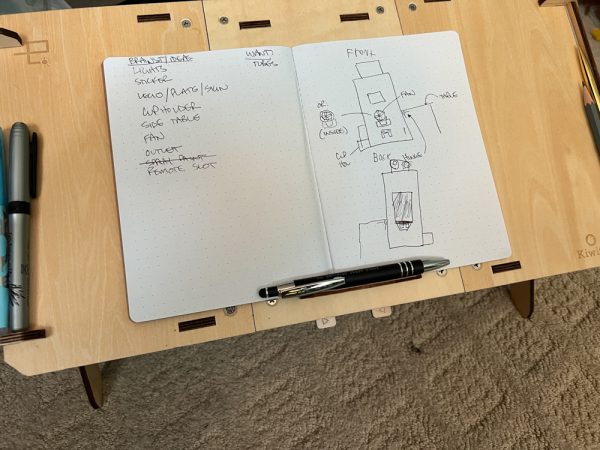 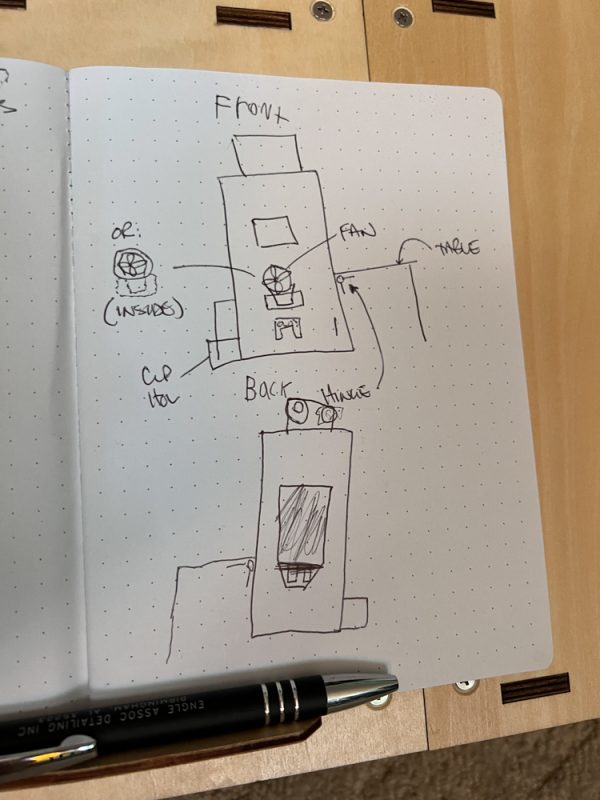 They managed to scrounge some unused LED lights to add a serious pizazz to Version 3.0. 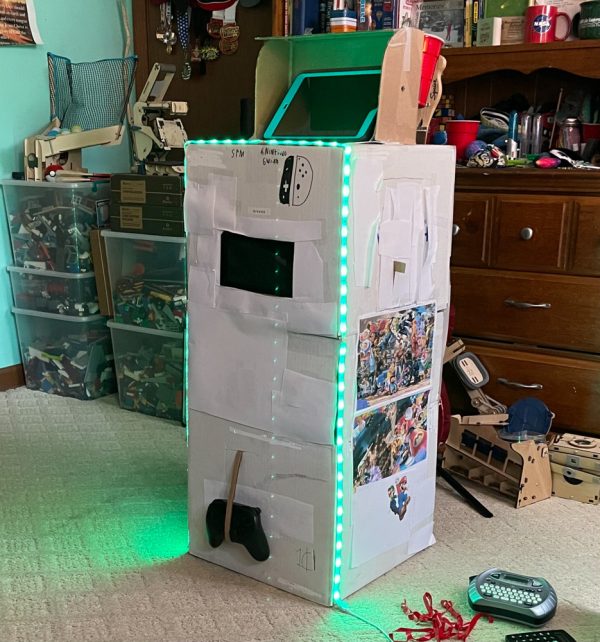 Now the SFM now had STYLE. 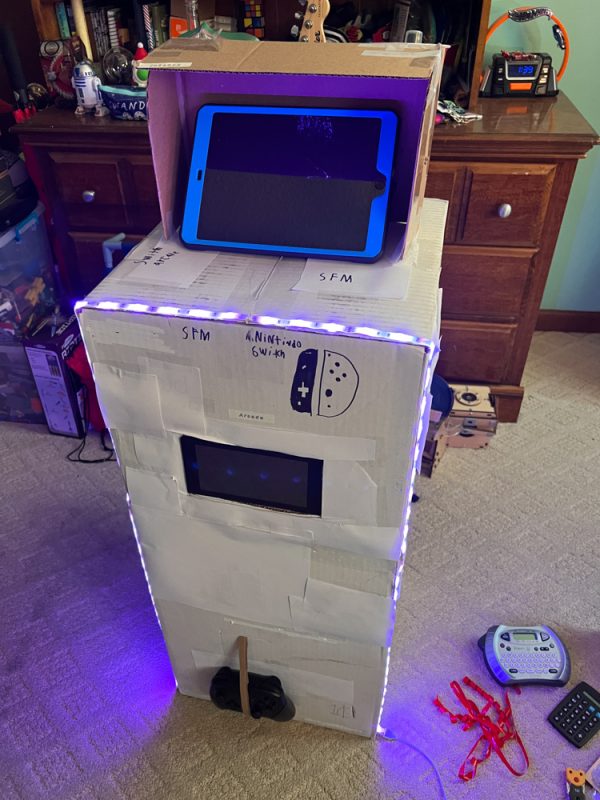 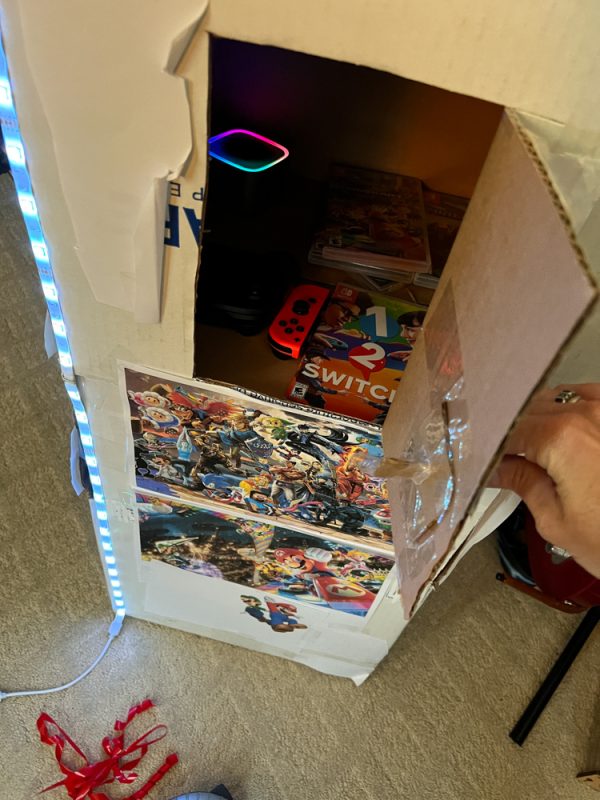 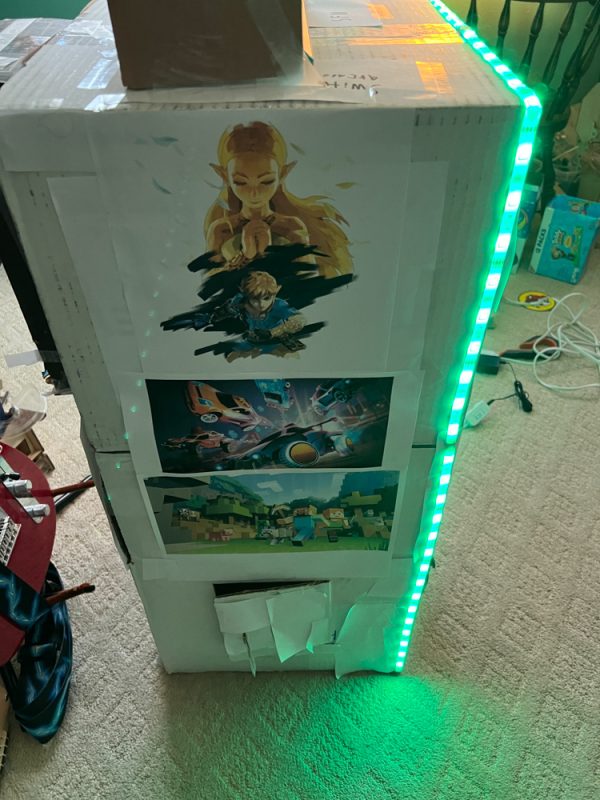 The final step, which took quite a bit of work and a couple of failed attempts, was to add a fan. Because a SFM User should not get overheated. 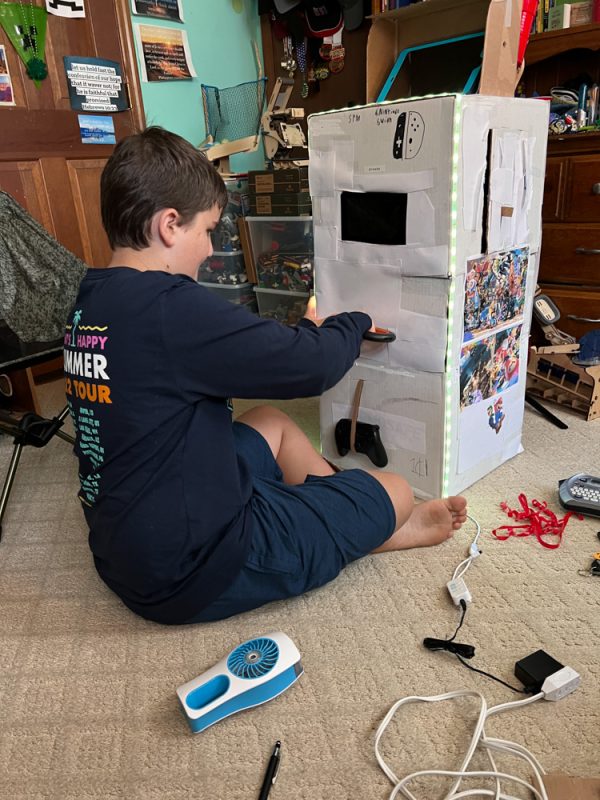 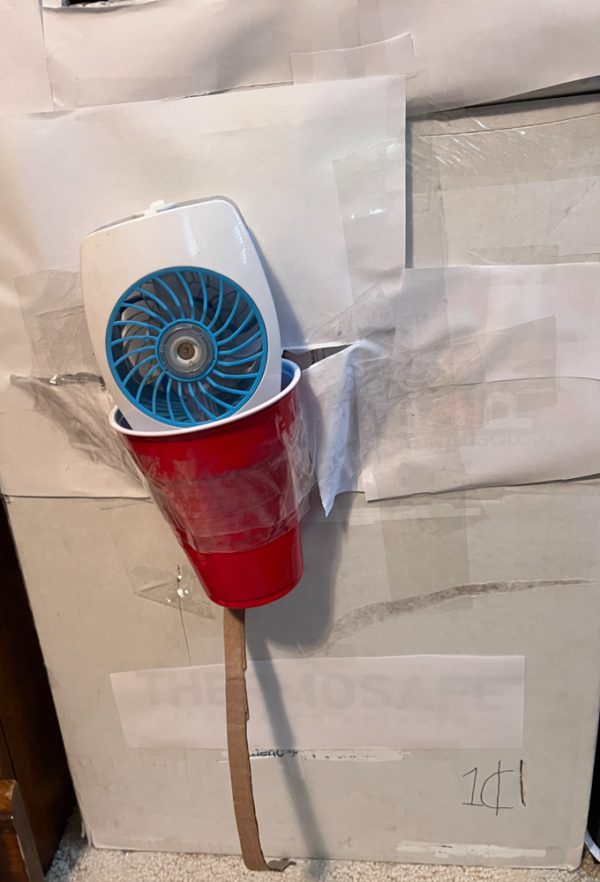 And the addition of a velcro dock for the lighting remote control. 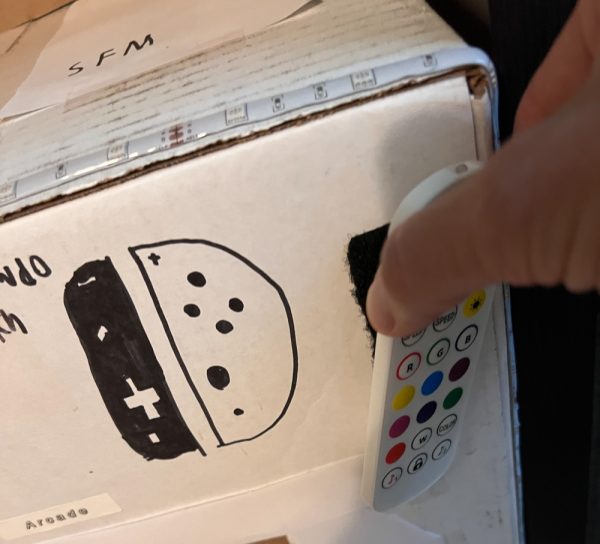 Because did I mention that the lighting is music-syncopated?

Yup. It’s time to see The SFM in Action.

Heck no are you crazy?