It’s been a weird month for me.

My subconscious wants to write very badly – I have dreamed about writing blog posts multiple times in the past month.

And those dreams have not been limited to when I was asleep.

When I got my first dose ever of “the gas” at the dentist, I was so trippy that my entire being was spinning out in staticky, multicolored, 8D spirals, and as the galaxies orbited what was left of me, I began realizing deep truths such as “I don’t even exist anymore. But I faintly hear the dentist still drilling on my teeth. I wonder if she realizes I don’t exist anymore. Someone should tell her she’s wasting her time except it can’t be me because I don’t exist anymore. But wow this would make a great blog post. Wait until I describe these new colors and sensations to the world. It will CHANGE IT.”

(Right after that, I came back to existence enough to rip off the gas and vomit three times.)

(I’m pretty sure my dentist will not allow me to have such services again.)

So yeah, a weird month. But despite my desire to write, I have had a rough month health-wise, so I haven’t been able to write. I’m getting better, so I’ll try to document some of my jotted-down notes from the month.

(Except not the rest of my thoughts from the dentist’s chair. Because those would change the universe too drastically and I’m not ready to pull the rug out from under y’all like that.)

In case you haven’t noticed, kids talk a lot.

They ask a lot of questions, tells the same things over and over, and LOVE to, once they can read, tell you everything they are reading.

The prime ages for this phenomenon, I believe, is between 6 and 10. Which helps me understand a little more why toddlers are middle schoolers are my jam.

(But, Noah is the snuggliest nine-year-old boy that ever lived, which entirely makes up for his endless words. Most of the time.) 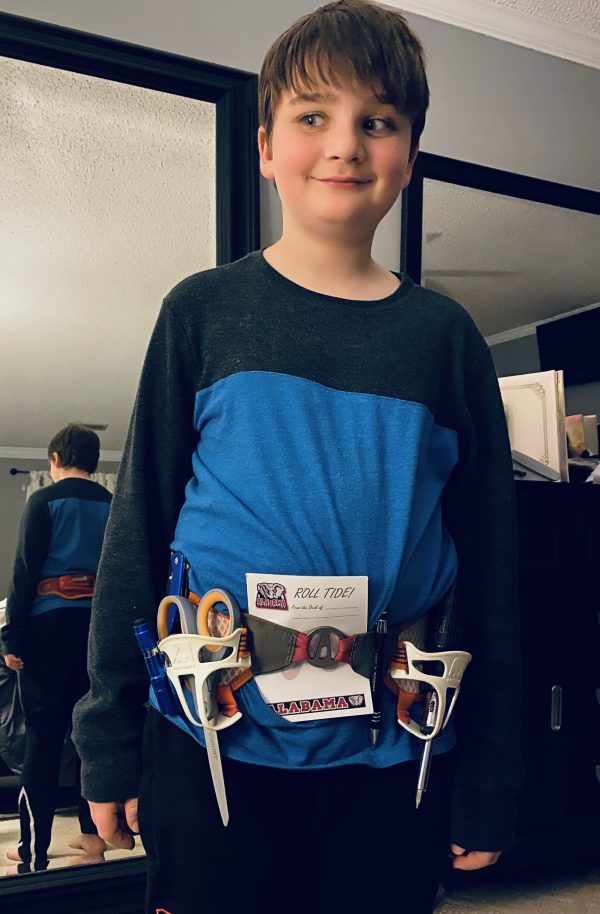 (Also he’s prepared for anything. Which comes in handy more often than you’d think. Though I did tell him I was afraid this particular preparation belt would keep me from having grandkids if he fell at the wrong angle.)

Car rides are especially difficult for words with me, because the multi-tasking of operating a large machine AND listening to my kid (because I learned long ago that I am entirely incapable of tuning out any words ever) is tricky. So I have tried to hone the quality of words that come out in the car.

And so, there needs to be a helpful chart – a continuum if you will – of the things read or narrated to a parent while said parent is driving.

Level Negative Ten: iPad narration. I DO NOT CARE what your Monsters are singing about. THAT IS GREAT that you just killed all your Minecraft villagers and goats, but is it really? Did those angular goats really deserve that slaughter? But whatever you want to do to the goats, do it – just don’t tell me about it while I’m driving. (We even have a family code word (more on that later) for QUIT NARRATING YOUR IPAD GAME TO ME.)

Level Negative Six: Jokes from a joke book. Or worse, jokes they know and have already told you ten times. Jokes are excruciating 99 out of 100 times. But then there’s always that one joke that catches you off guard and actually makes you laugh, which makes it not so bad.

Level Negative Two: Trivia books and Guinness Book of World Record books. These facts, read aloud, can be sometimes interesting. But then they seem to read the same pages over and over and they begin to feel like jokes.

Level Positive Two: Hearing about the books they’re reading, or their school books. I like knowing that they’re interested and involved in what they’re reading. Although Noah sometimes gets too involved in his history book, throwing his book on the floor and screaming at our forefathers for their prejudices, poor decision making, and foolish life-ending dueling. But that can be entertaining as well, giving this oration an overall positive rating.

Level Positive Four: Family Feud Cards. This is the one random Car Conversation Savior that I’ve found I enjoy. Someone got these for Christmas, and Noah loves quizzing Chris and I on Family Feud categories. They’re actually entertaining with the same magic that Family Feud is entertaining as a show – magic I don’t necessarily understand but appreciate nonetheless. But what makes them most fun is the children’s uncertainty about whether they’re inappropriate or not when they don’t understand them.

I present this example:

Noah: “Name things that start with the word ‘skinny'”

I snorted. My first thought was “Skinny B**ch”

I wondered if it was on the card, but I certainly wasn’t going to ask.

Chris and I got a few right, then trailed off.

Noah:”There’s only one left but I think it’s inappropriate.”

Chris and I thought for a second, then exploded with laughter.

And immediately dared each other to go into Starbucks and order a Skinny Late with Two T’s.

I’m learning how to live with an apparent extrovert.

I held out hope for a long time that Noah was just an outgoing introvert, but the evidence continues to suggest a strong strain of extroversion. The amount of sounds that need to come out of his mouth at all times is staggering. It’s mostly questions but also comments, sounds, random thoughts, and just a stream of consciousness.

As such, over the past few years, we’ve created a collection of Callahan Family Code Words. I only have to say one word, and he knows exactly what I mean, rather than me having to use up all my words telling him to use less words.

Here is the legend to the Callahan Family Code Words. We haven’t copyrighted them, and so we offer them free to help you, too, have a less verbally overwhelming life.

Rubiks – “You’re making random, repetitive, completely unnecessary noises and I let it go for a while but I now need you to cease.”

Honda – “That question is either a.) a question about the future, b.) a completely unnecessary question, or c.) you’re just out of questions for the day because you’ve asked more than my brain can possibly handle. So I’m not answering it.”

Blubbermuffin – “NO ONE wants to hear your narration of your iPad game. If you don’t want your iPad to disappear forever, you’re gonna have to keep your mouth shut while playing.”

Banana – “Quit using your mouth and start using your eyes. We’re on a hike forgoodnesssake can we enjoy the sounds of nature PLEASE.”

The nicest part of these words is that I have to be less rude as a mother. There’s much less emotional content to just say “Honda” rather than “FOR THE LOVE DO NOT ASK ME ANOTHER BLOOMIN’ QUESTION, CHILD.” He knows what I mean and he accepts it without emotion. AND, the magic of the code word keeps him from arguing with me – it just ends the conversation.

But despite my code words’ helpfulness, I do assume this blog post has fully informed you of where my headspace has been going and why I haven’t had any words left for writing.