Last week, the kids and I went to Greenville to visit Not-Crazy-Renee. We make it there a couple times a year to see our former neighbors, and to take their Christmas card pictures. My kids love going up there, but Noah especially was excited about this year because he was really looking forward to visiting with Snakey Butters Buttercup, Loulie’s Pet Python. Noah’s love, nay obsession with snakes being new, we haven’t visited our only Reptile-Owning friends since his glorious realization. So he’s been counting down the days for a month. 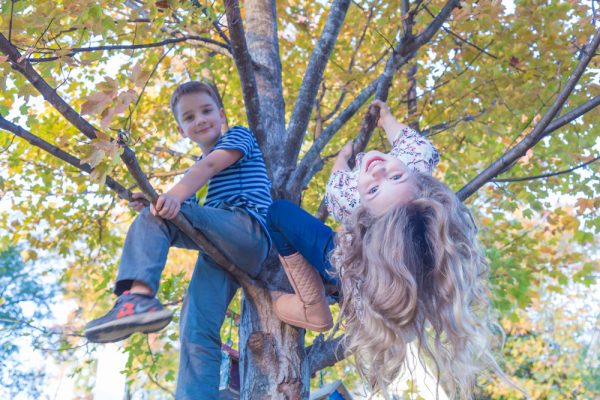 She was waiting in front of their house for us with a Python wrapped around her ankle.

There are a lot of signs pointing to their future romance, but if they could have a double wedding alongside Loulie’s snake and Noah’s future snake, that would just be fantastic. 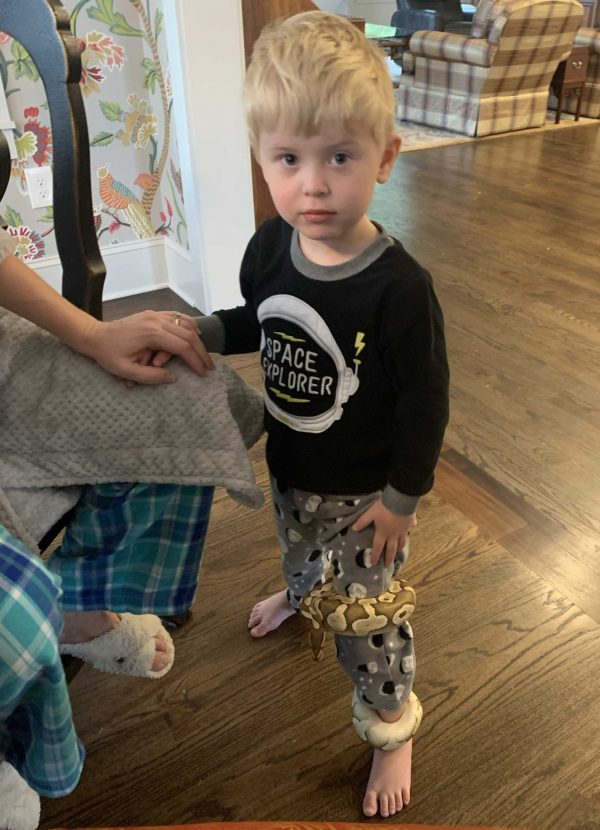 I did not get a picture of Loulie with the snake around her leg, but here’s Joshua demonstrating later in the weekend.

We arrived on Wednesday, got settled in, played with Snakey, and chatted as Renee made us delicious, fresh, hot cookies. I may have eaten three. They were gooey, chocolate chip, cashew butter cookies that melted in your mouth.

The cookies had even won a Major Award – Not a Leg Lamp, but close to it – a spray-painted beer bottle that said “Best Side Dish.” 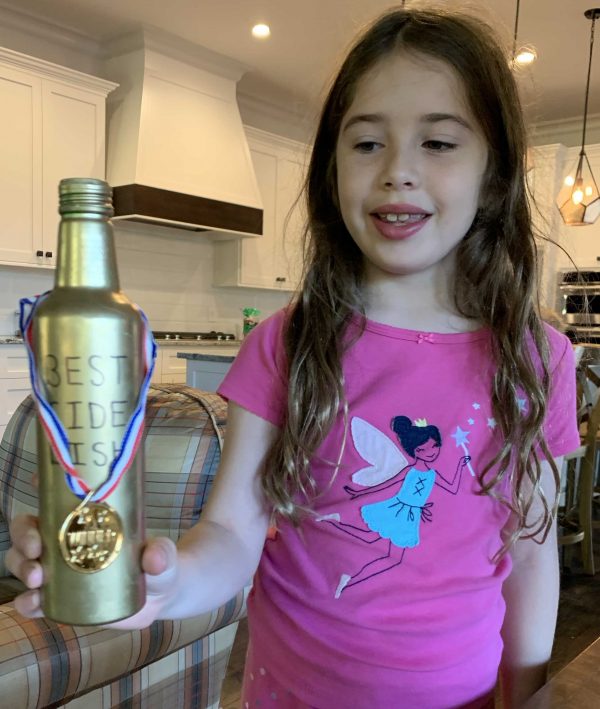 I was told, in fact, that according to neighborhood regulations I was somehow supposed to incorporate said beer bottle into their family Christmas photos. I wasn’t so sure about all that. Maybe if the snake was wrapped around the beer bottle? Hm. But the snake looked so much better wrapped around her three-year-old. 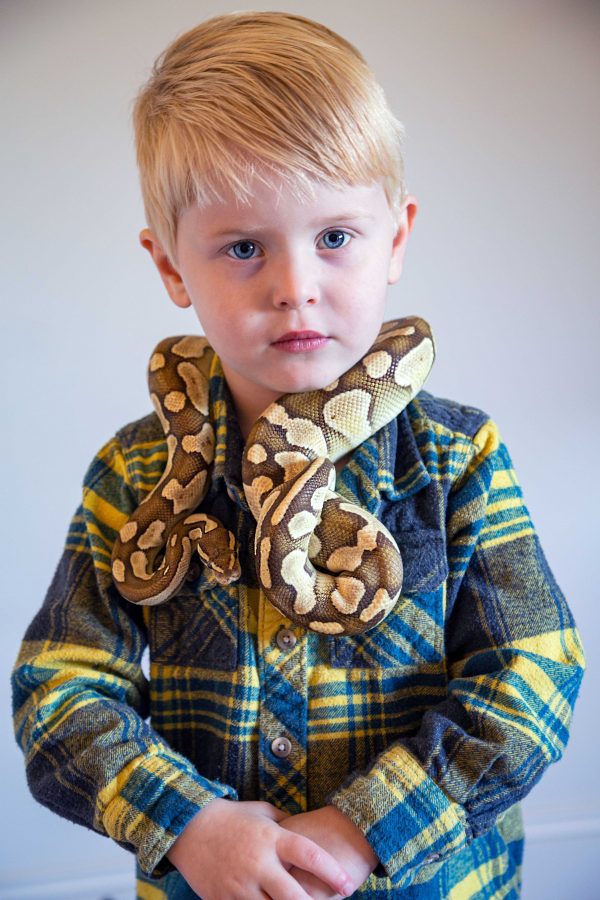 This would be the Best. Christmas Card. Ever.

We wiled away the afternoon eating cookies and fending off children wanting to eat ALL the cookies. 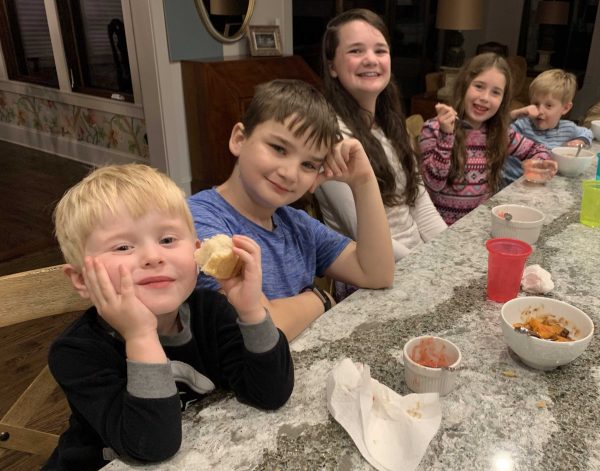 As it came to pass, right around bedtime, Noah came and asked if he could have a cookie. That kid is amazing at causing delays to bedtime, but this one might have been his crowning achievement in life.

I asked the question we’d been asking our children all day. “How many cookies have you already had?”

Oh – I hadn’t noticed that Noah had been so overwhelmed with his love for Snakey that he’d missed The Cookie Train.

Close to bedtime though it was, I said sure – have a cookie. Why not. We’re on vacation.

As he took his first bite, he started gagging and coughing.

I said “Did you BREATHE the cookie or eat it?”

He disappeared for a few minutes (later he admitted that he snuck off to throw the rest of the cookie away because it tasted terrible to him), then came back and sat down beside me, rather disturbed. “I feel like I need to sneeze but I can’t quit coughing.”

This was the moment I first wondered if he was having an allergic reaction. No one has ever been seriously allergic to something in our family, so I’d never seen it before.

Then his voice started fading, he got hoarse, and gagged a couple times. Then his lips started swelling on one side.

Okay. This is an allergic reaction. He had never had cashews before that I was aware of (he’s a the most unadventurous eater), so I was positive that it was the cashew butter in the cookies.

I was texting with a Pediatrist friend, Adolfo, at this point, along with another friend, Ashley, whose kid has allergies.

The Benadryl immediately made his lip swelling go down, and Noah kept insisting that he felt fine, his voice was getting better, and he didn’t need to cough anymore.

But he needed to go to the bathroom.

I waited anxiously outside the bathroom door…and when he came out, he was rubbing his eyes, saying they itched. They were bloodshot and swelling.

That, combined with the sudden need to go to the bathroom and accompanying the stomachache constituted enough systems involved in the reaction – he was in for a visit to the ER. Doctor Adolfo declared it. It was time…for The Shot. 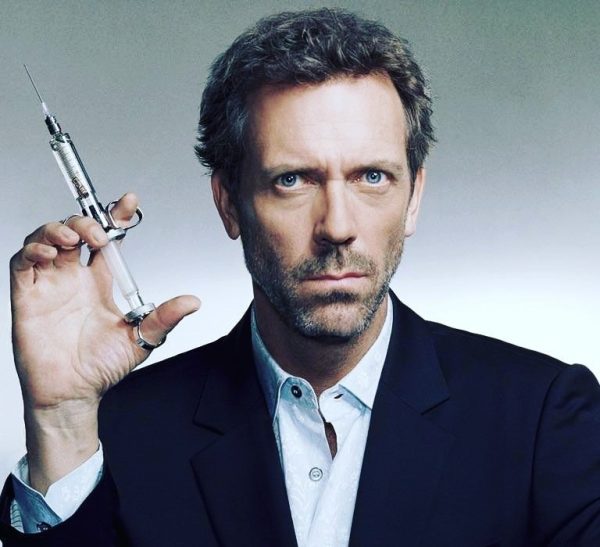 I told Ali goodnight and not to worry, and packed her brother off for the ten minute drive to the Children’s ER. He said he was hot when we left the house, but was shaking when we got to the ER. As we went through security and the security guard extra thoroughly scanned Noah with his wand (8 year old boys are a clear and present danger to society), I looked at Noah in the light for the first time in fifteen minutes. His face was now swollen, splotchy, and covered in hives. 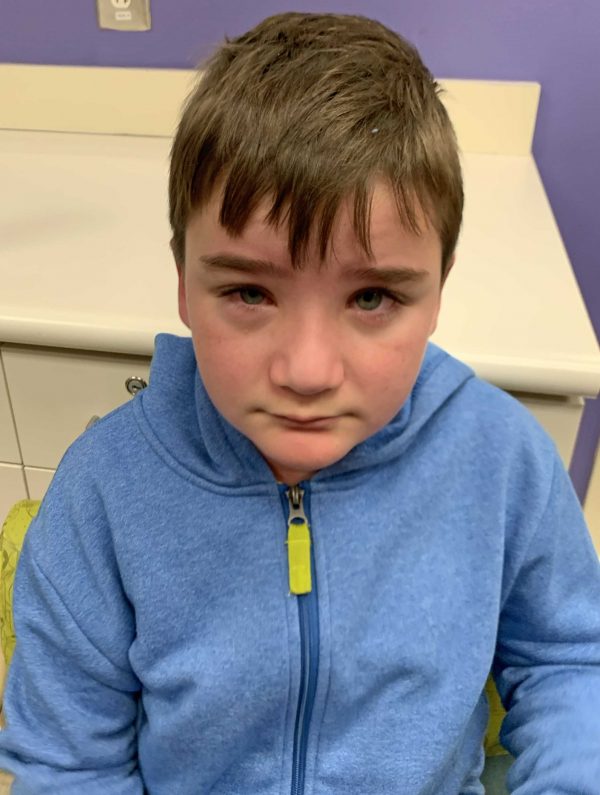 Thankfully, the word “anaphylaxis” gets you a room really quickly at a Children’s emergency room.

The newbie resident came in, checked Noah out, lifted his shirt to find out that Noah was now covered in red swelling hives, 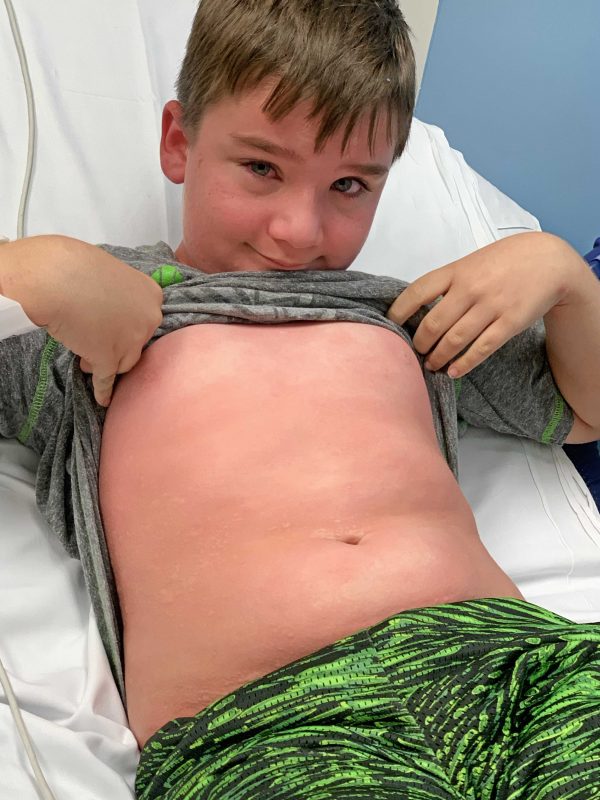 then announced casually, “Well, I think we’ll observe him for a while, maybe give him some Zyrtec later…”

Dear Newbie. Have you ever had a rotation in a children’s ER before??

I said in my most humble voice, “All of these hives came on since we got to the hospital. Isn’t there anything we can do for him now?” 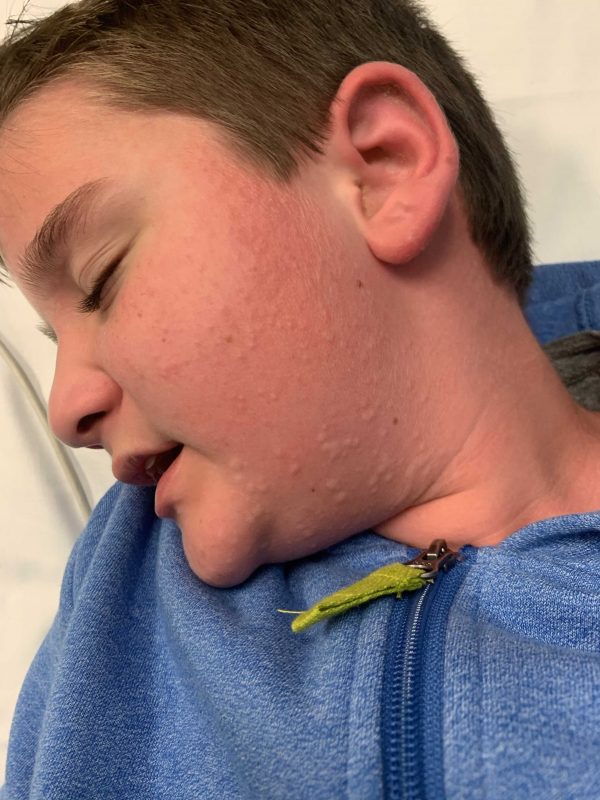 Meanwhile Noah is violently shaking, freezing cold, and itchy all over. 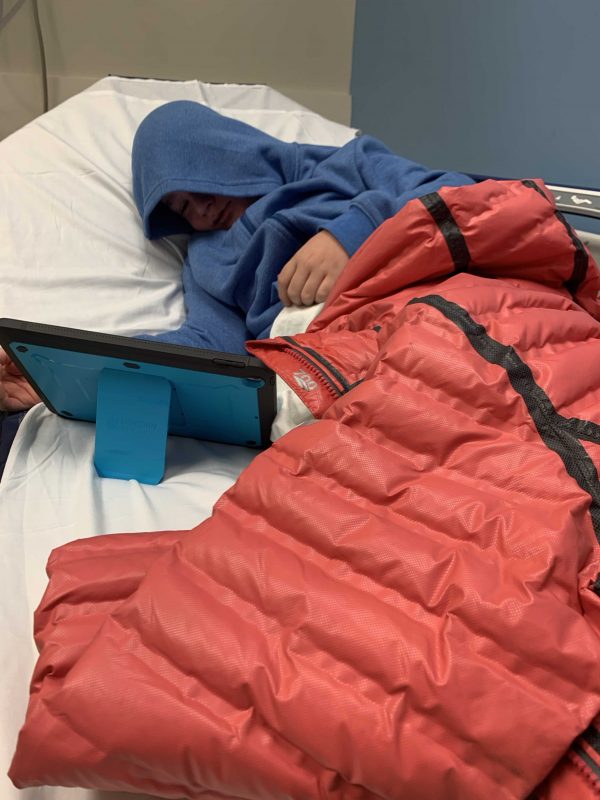 Resident was clearly offended at me questioning his Medical Qualifications.

Doc Casual mumbled something and left the room. 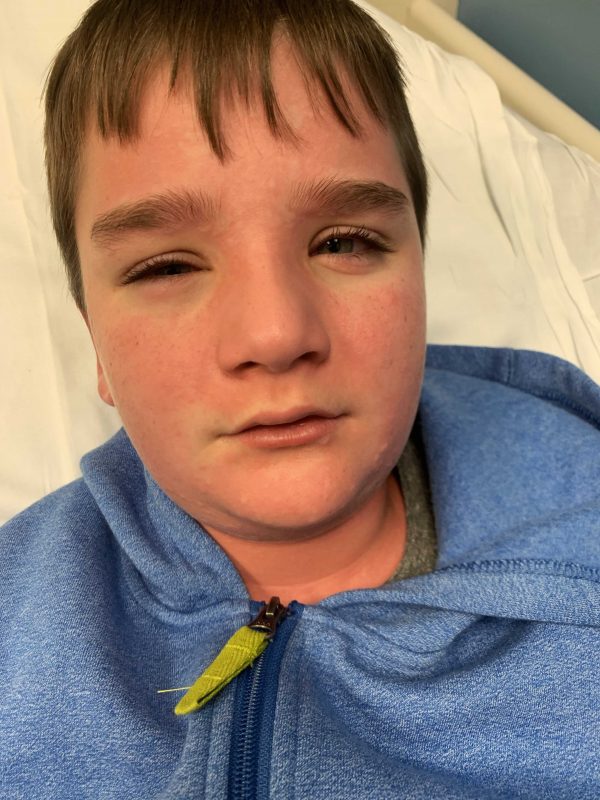 A few minutes later he was back, this time with his “supervisor” (aren’t they called Attendings? It felt very factory-like for him to introduce me to his supervisor), who immediately said “Actually, this kid needs an injection of epinephrine. Then we will need to observe him for four hours to make sure he doesn’t need more.”

A few minutes after the shot, he quit shaking. And started talking. His EpiHappiness was off the charts. He spent the next three hours jabbering continuously as his hives faded slowly, starting around his injection site and radiating outward. 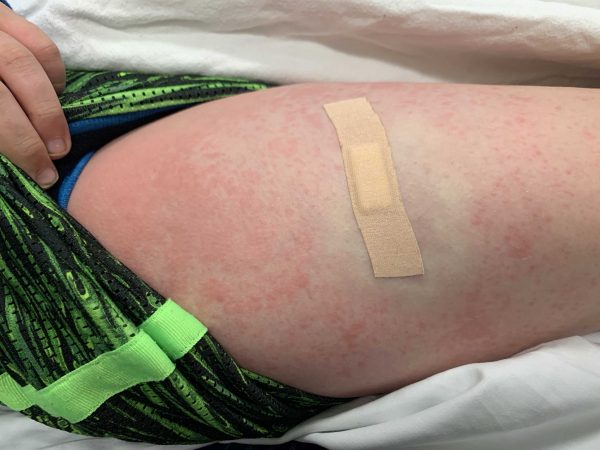 “I can’t believe I get to stay up so late. Thanks for bringing me to the ER. Look at these superheroes on the wall! Thanks for staying with me. This is a fun TV show! I don’t think I like Cashews. That shot wasn’t so bad! Once Ali got a shot she didn’t even feel. I can’t believe a cookie sent me to the emergency room! Not everyone can say that, huh??”

Finally I said, “So is the emergency room fun?”

“Well I’m getting to drink GATORADE and eat GOLDFISH and watch TV and play IPAD WAAAAAY after my bedtime so yeah I’d say this is really really fun!!!”

Of course, he finally got sleepy about half an hour before it was our turn to be sent home. He fell asleep at 1:15am. 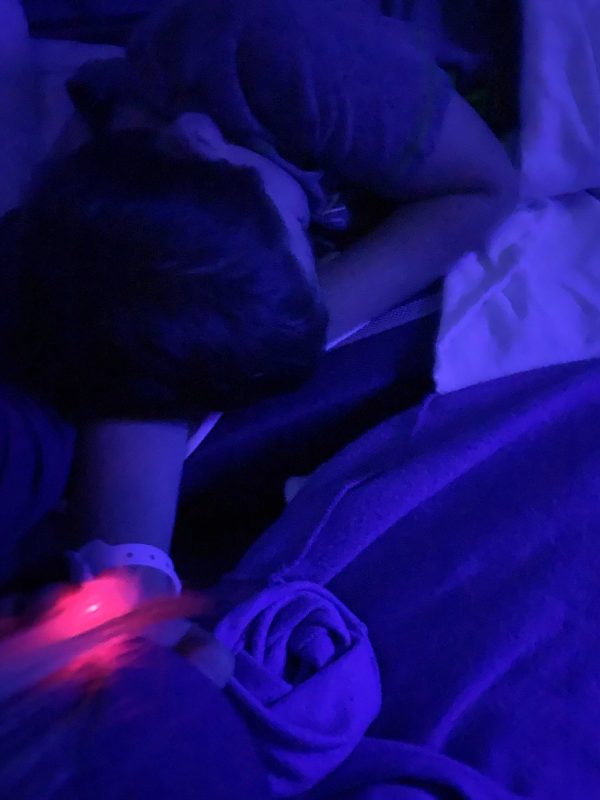 At 1:45am, the original resident came in and told us we could go home. I roused Noah and he returned to his EpiHappyChattiness.

“Thanks for taking me to the ER, mom. Thanks for staying with me, Mom. And hey – I’m really glad I didn’t eat a cookie until bedtime because that way I got to play with my friends until it was time for them to go to bed!”

Definitely his best bedtime stall ever.

His swelling took a couple days to go down fully, and he and I spent a day walking around Greenville as complete zombies.

And of course, Noah also made sure to spend lots of time with his Personal Emotional Support Therapy Snake to help recover from his adventures. 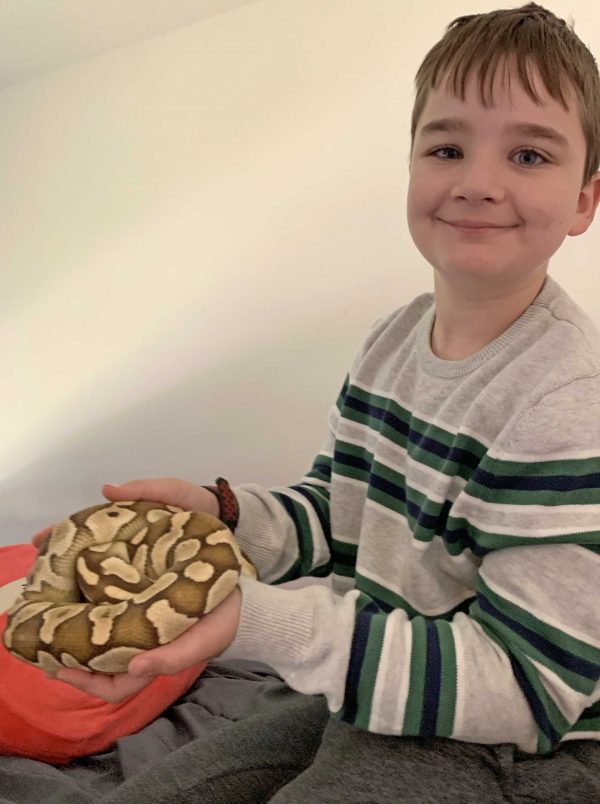 So, I get it. You would think that five children playing with a Python for three days would be the danger. 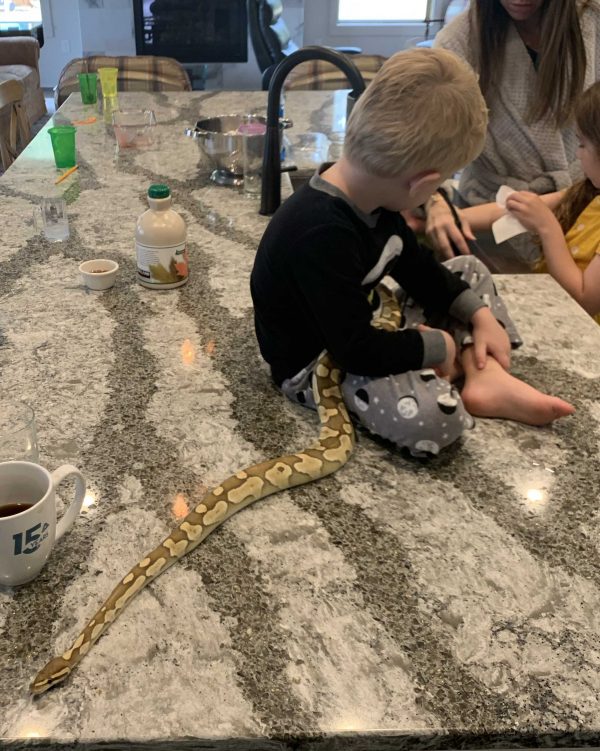 But no – Snakey Butters Buttercup was the perfect hostess. In this story, it was the Gourmet, Prize-Winning Cookies that were the real predator.

Epilogue: We’re doing all the things now – toting EpiPens, prepping for allergy testing, reading labels…all the things. And as Noah sees it, this is the Best News Ever because it means that he can continue being a picky eater. Chicken fingers and fries it is – from here to forever.

8 thoughts on “The Education of Anaphylaxis.”