We are a little over a month into being A Pet Family. 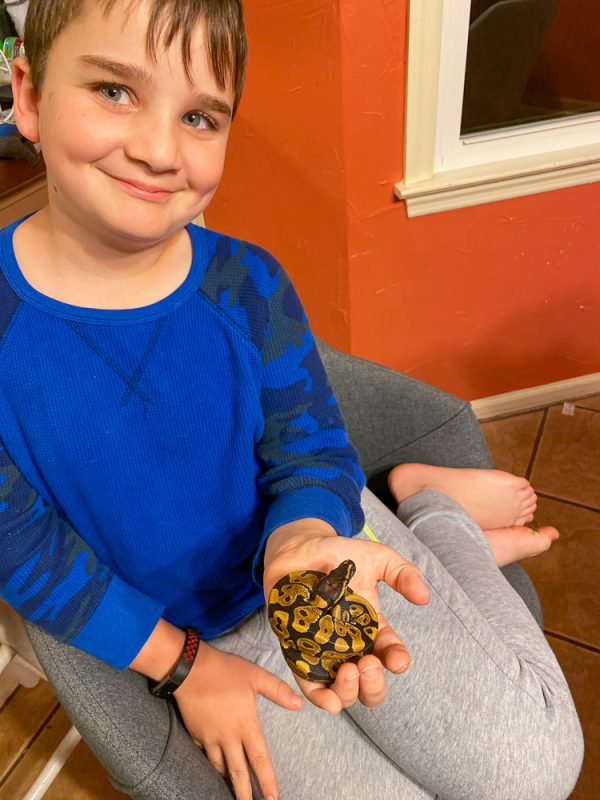 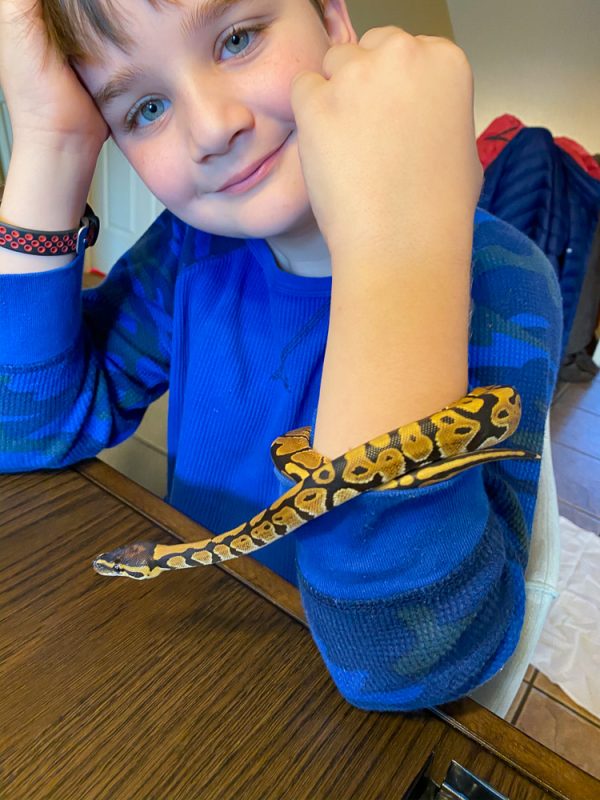 Buddy is an extrovert, 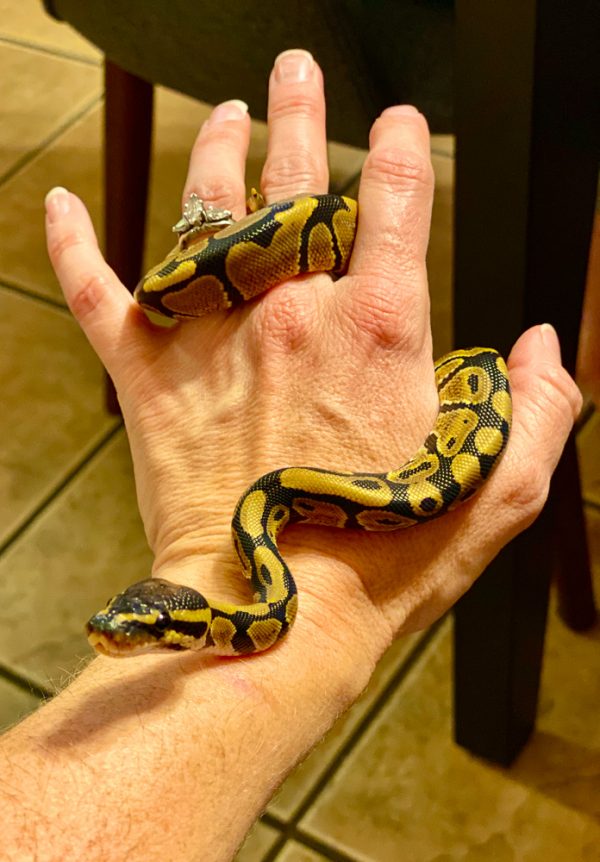 always doing crazy things like hanging upside down to drink his water (show off), 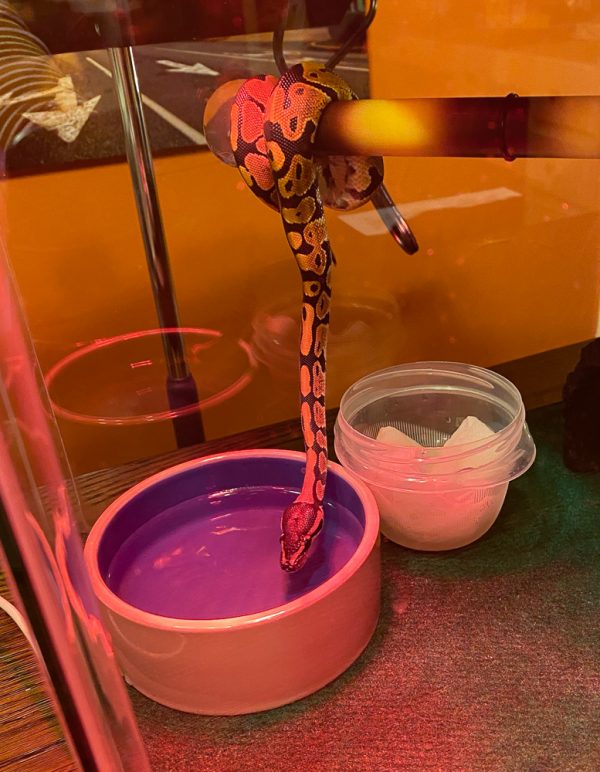 Fixing my hair in new and creative ways, 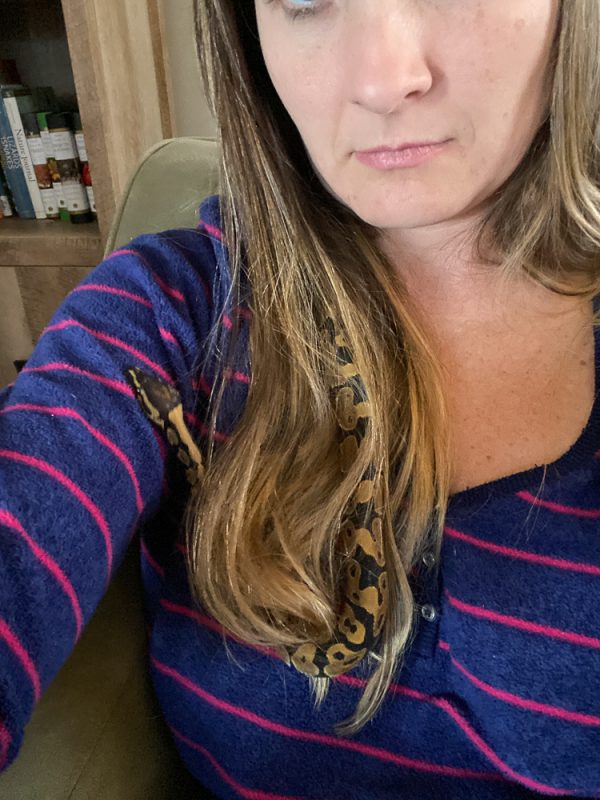 Curling up with his gauges, 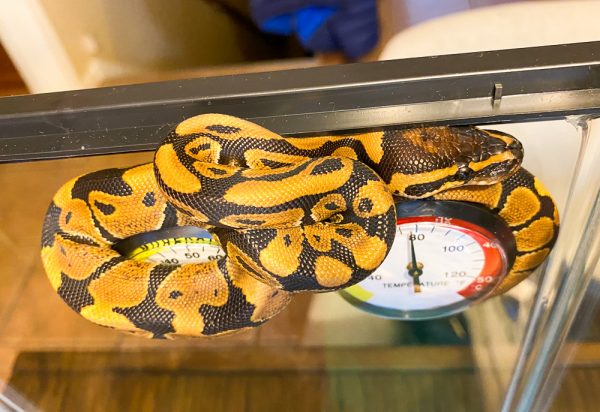 And helping me edit pictures. 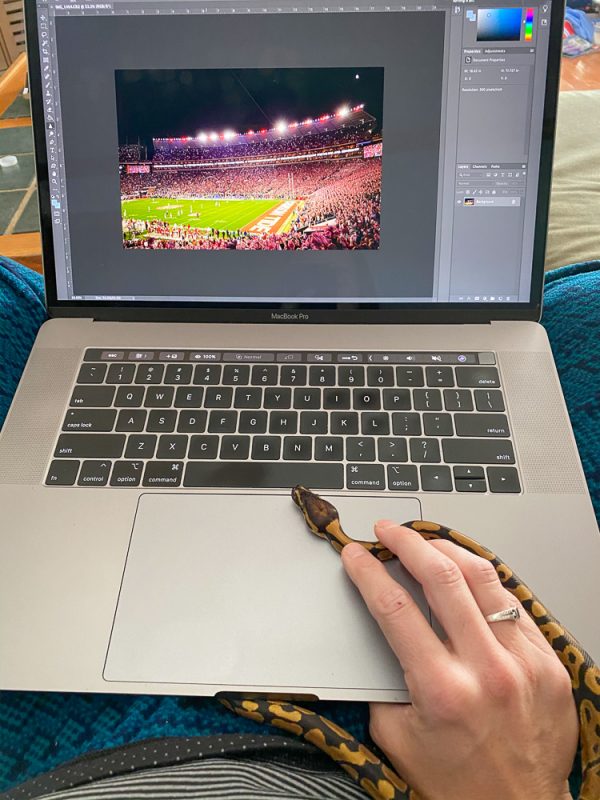 He’s definitely a people snake, loving to cuddle with us and crawl around, stealing our heat. And our heart. 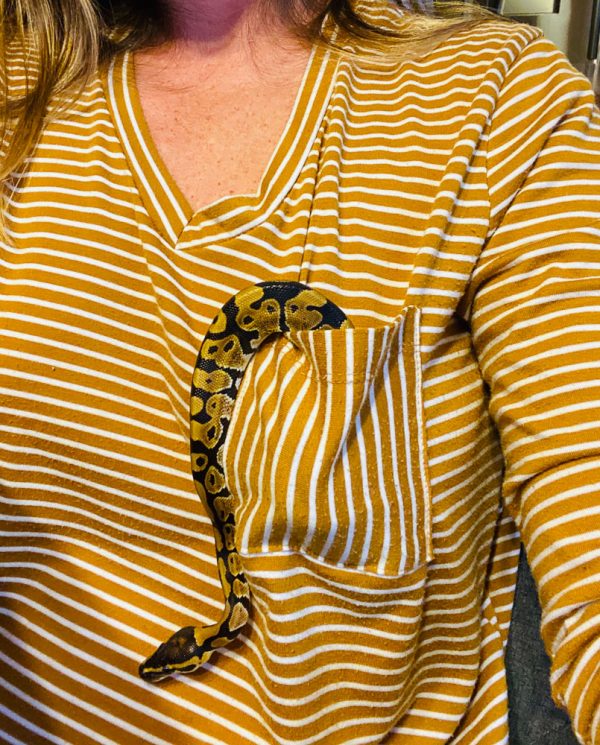 But he is opinionated. He will sniff a visitor (with his tongue) and turn around and scamper up my arm if he deems the visitor unsavory. 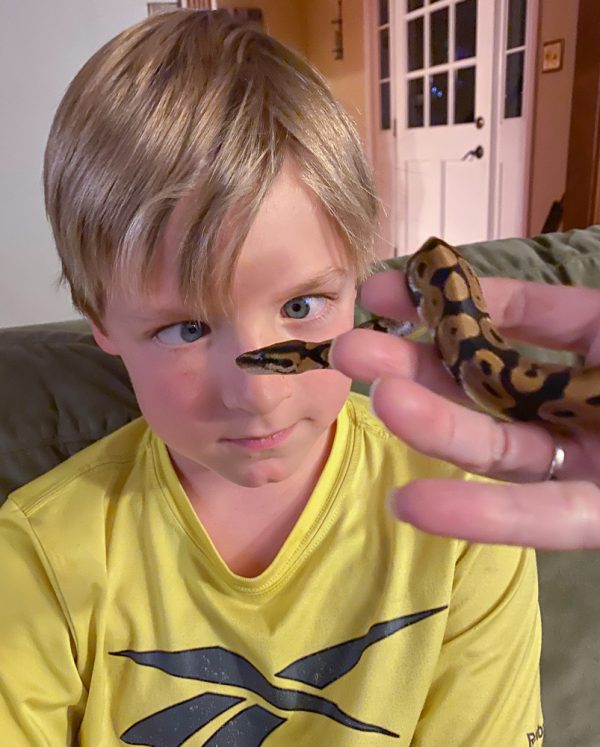 And he will camp out on Chris, because he is always emanating heat. (I’m not saying that Chris does lift his shirt to allow Buddy to curl up on him like a heat rock, but I’m not saying he doesn’t.)

He is also a bit like a Look ‘N Find book, with all sorts of fun patterns and shapes.

We call this his row of Bunnies, 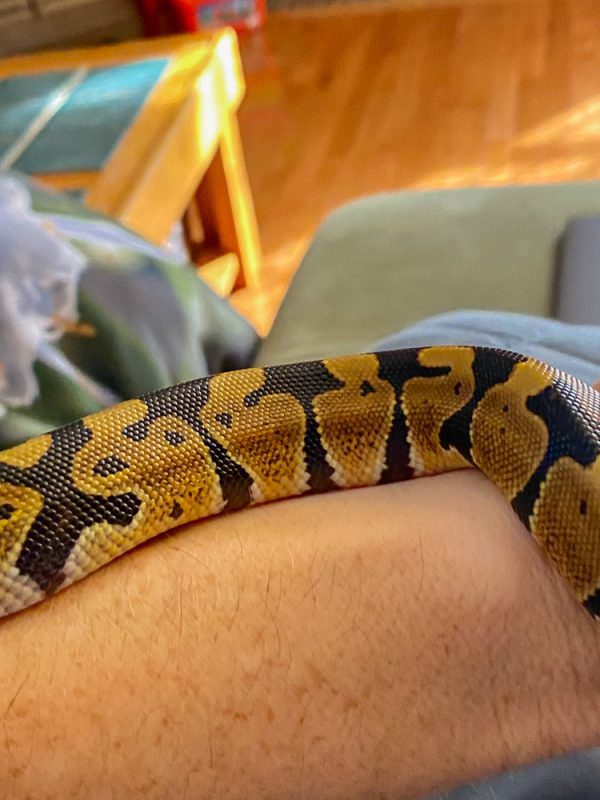 This is his keyhole, 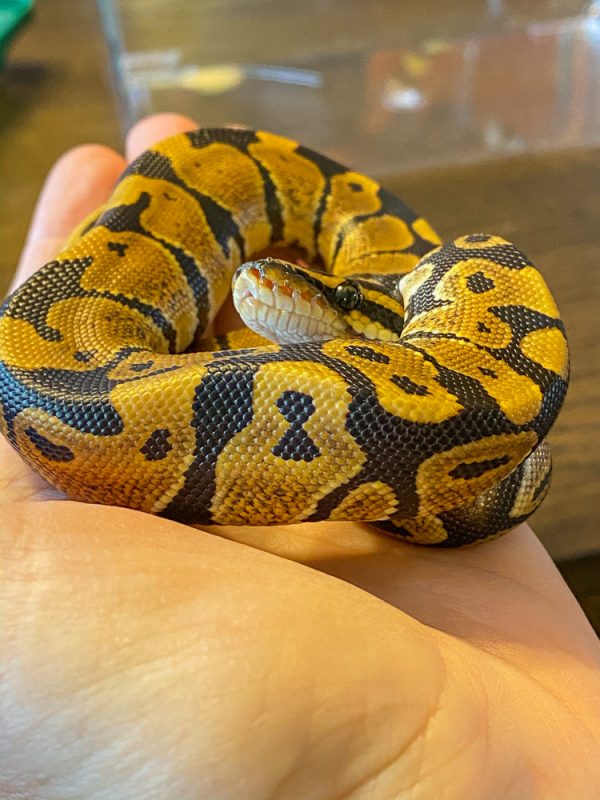 This is his Monsters Inc. tattoo, 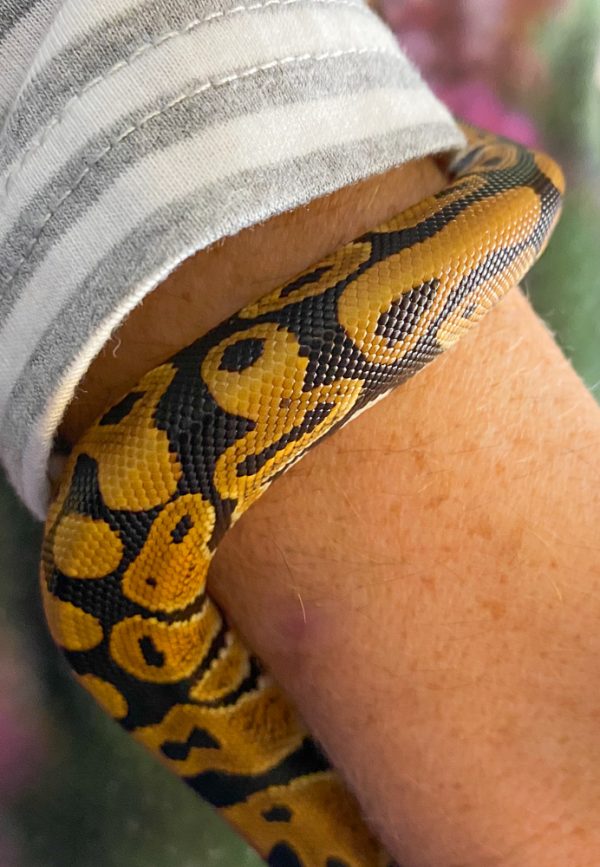 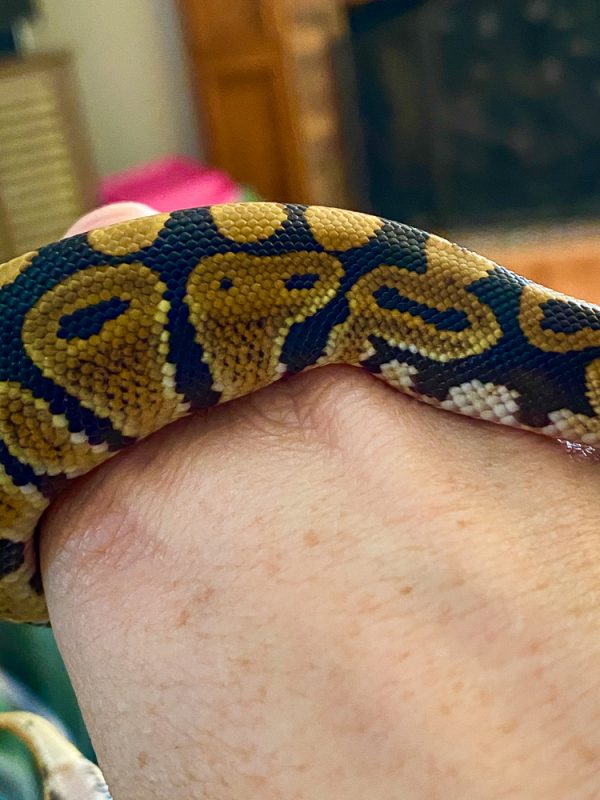 The first three weeks of Buddy ownership were a delight. He was always willing to play, a super easy pet to own (Only feed once a week! Play with him if you feel like it! No hair on the furniture!)

It Came to Pass that it was time for Buddy’s first shed. Turns out, baby snakes shed a lot – every 4-12 weeks, whereas adult snakes can shed as little as once a year. I did not know that the shedding process is a long, ugly, stressful one. And when you’re a baby snake whose mother abandoned you in the egg, nobody is there to explain the facts of life. Nobody is there to answer your snakey questions.

“Why don’t I have fingers to scratch my itches?”

“Why am I suddenly blind?”

“How to I remove this outer layer from my body?”

“Is this how I’m going to feel from now on?”

And so, Buddy entered into a severe season of Man Flu. Gone was his quirky personality and high activity. He was now a mopey, hormonal teenager who didn’t know what was happening to his body. 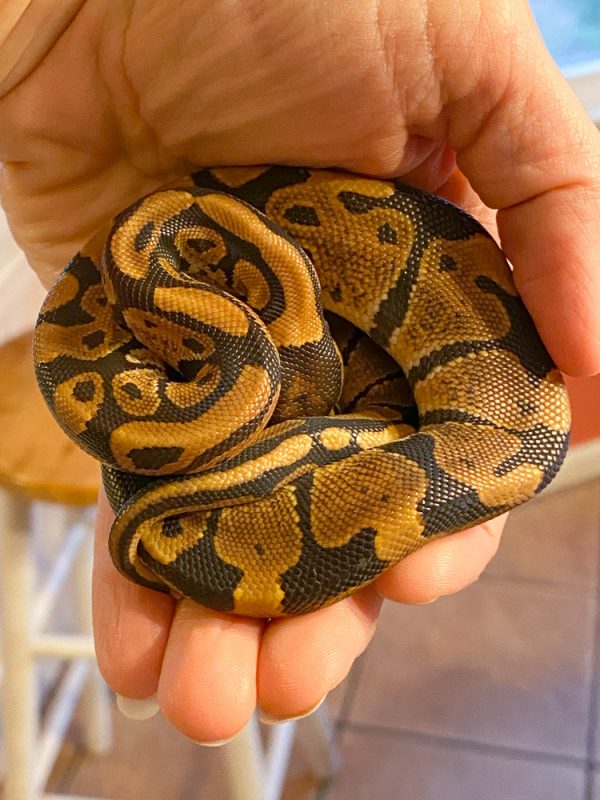 He spent a day in his hide. Then he spent two days in his water bowl, as if he were in a hot tub, chillin’, waiting for the ladies to show up. 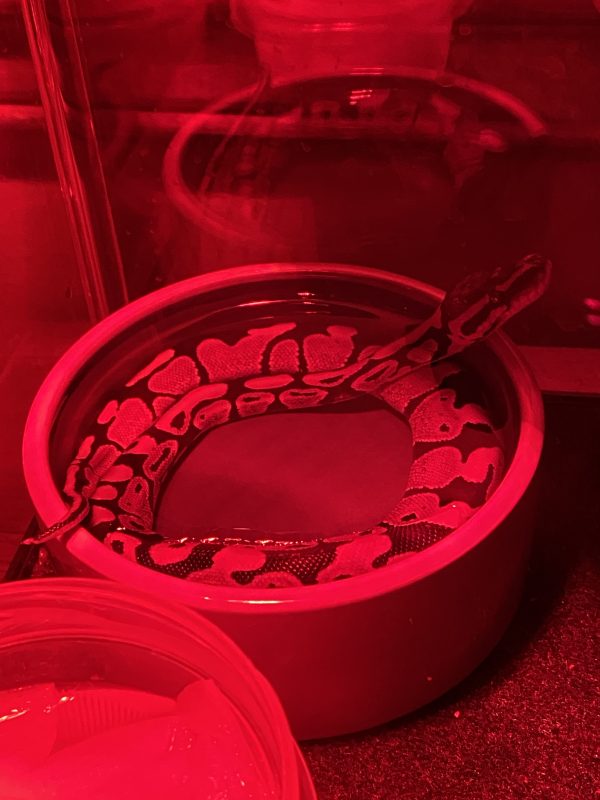 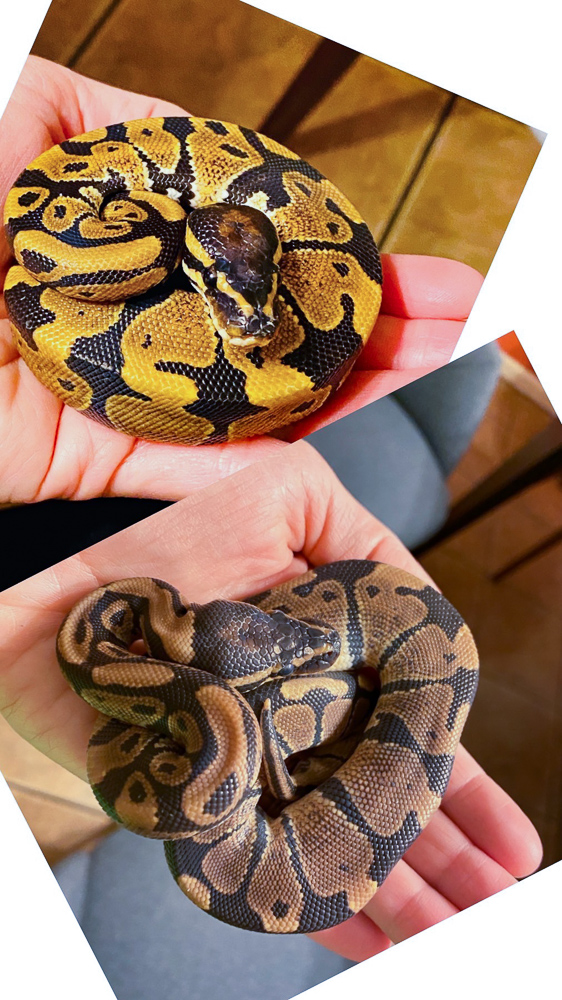 He spent another two days in his hide.

Then finally, he began to shed. We woke up in the morning and there were a couple scraps of shed in his cage. Which isn’t how it’s supposed to happen – it’s supposed to come off in one long un-holey sock, including the eye caps, which was what had been making him blind for the better part of a week – because yes, they shed the outer layer of their eyes as well. 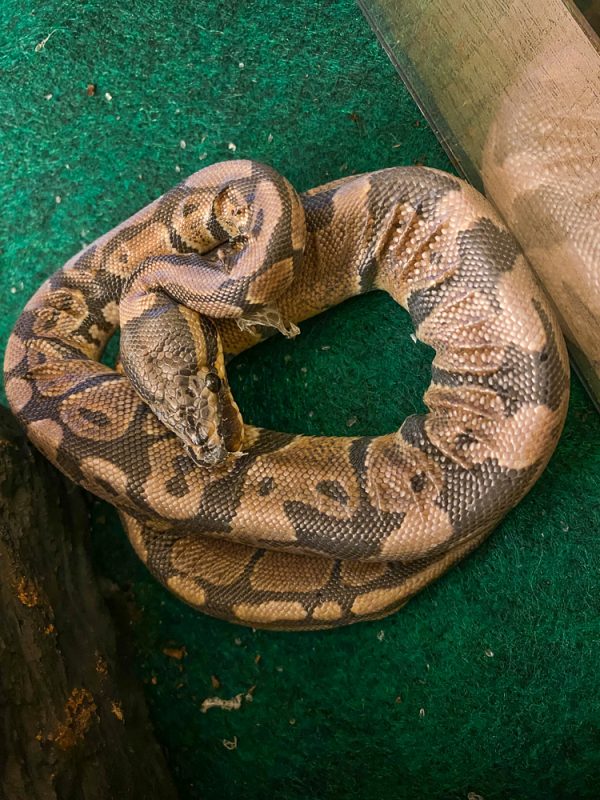 Now. The first thing that the Google tells you about your snake not fully shedding is that it’s definitely somehow your fault. OF COURSE. Your tank isn’t humid enough, pet owner. But alas, Google, we have a humidity and temperature gauge on both sides of the tank, and it IS humid enough. The second explanation is that perhaps he just doesn’t know what he’s doing, and this too shall pass as he gets older and more familiar with his body.

So then I started reading about what one must do to help when their snake struggles to shed. Even though shedding should be a five minute process, you don’t interfere for the first 24 hours. After that, the internet resoundingly agrees that the best way to help your snake is to put them in a sauna – a bowl with a lid and warm water and placed under their heat lamp, then peel them with a wet, warm washcloth.

Oh my goodness I get to peel my snake. Like a freakin’ banana.

So that’s what I did. 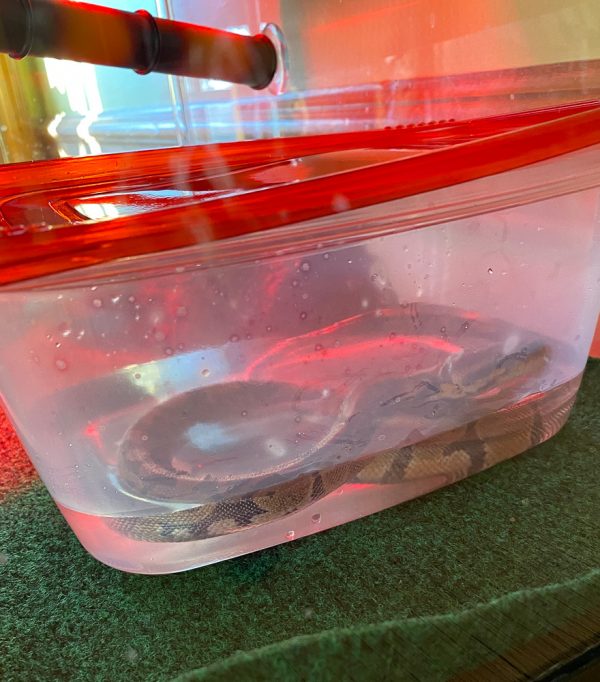 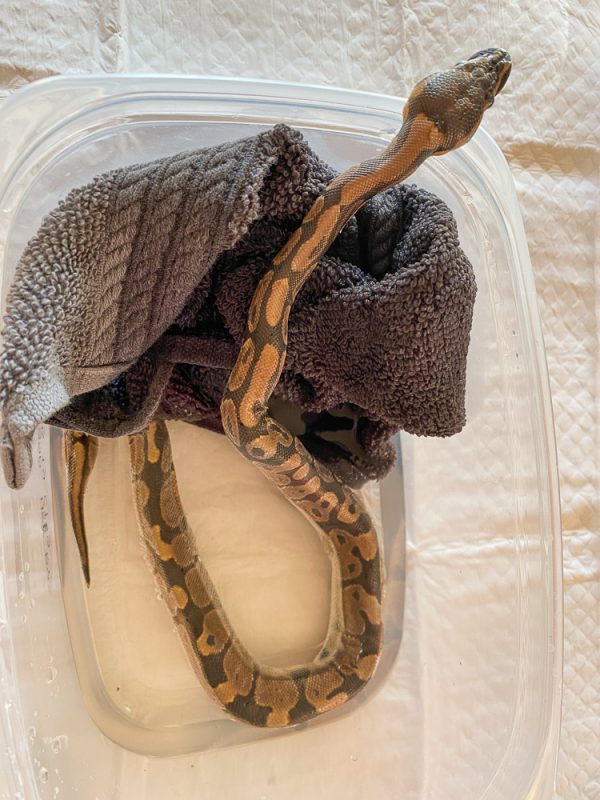 It took three days of Sauna-then-Peeling to get all of the skin off of his body, but his head (and eyes) were still covered because of course he couldn’t soak those as easily. 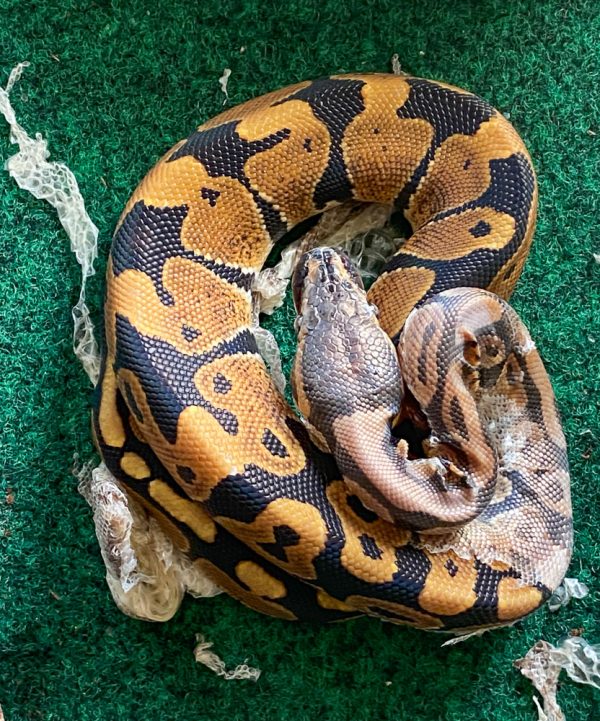 The beautiful color transformation mesmerized me. 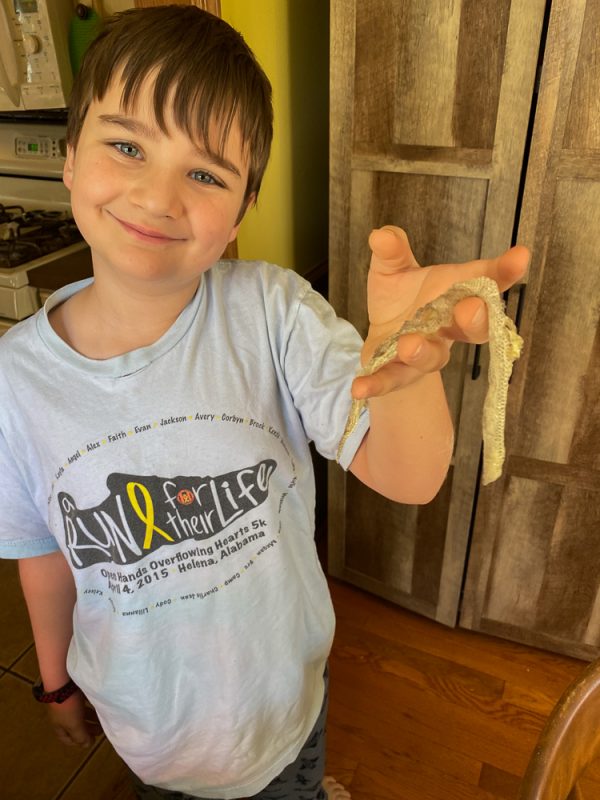 But on the fourth day of his Spa Treatment, the skin lifted up from his head enough that I was able to grasp ahold of it and slowly pull and …. Yes. I peeled Buddy’s eyes off. 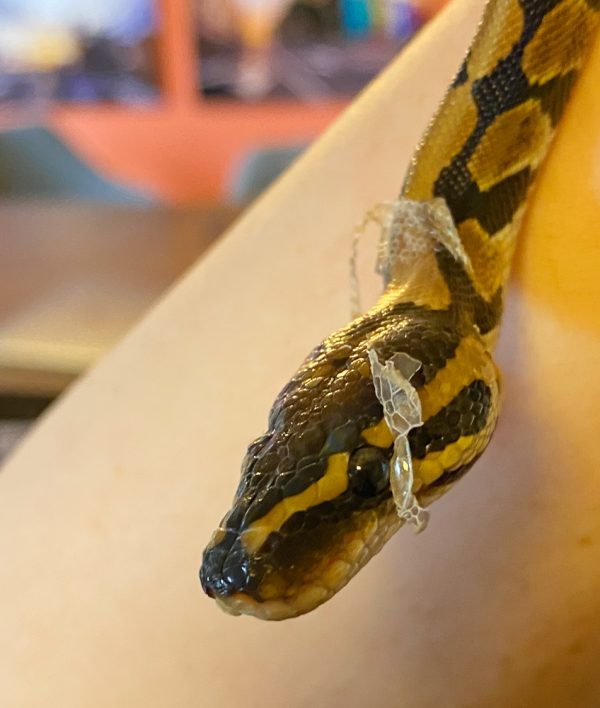 He wasn’t excited about the concept, but he never once, in all of this or for any other reason, snapped at me. If I May Say So Myself, pretty much any dog would have snapped at me if I peeled his eyes off. But our snake is a kind, loving, trusting, pacifist sort who has no interest in hurting me, his loving owner.

(I mean his loving owner’s mother. Because of course Buddy is Noah’s snake.)

So I peeled his eyes off (which was a much less violent solution than one thing the internet suggested, which was sticking a piece of scotch tape on their eyes and ripping them off – DO NOT always do what the internet tells you, people), and immediately, it was as if the scales fell from his eyes (oh wait they did) and he was the happiest, most excited snake I’ve ever seen. He crawled all around me and hugged my arm with love and appreciation for de-blinding him. I’m pretty sure he was singing the first verse of Amazing Grace repeatedly in his tiny snakey head. We bonded that day, Buddy and I.

So Buddy has continued his happy residency with us, enjoying cuddling and smelling us with his tongue and making slo-mo videos of said smelling.

He’s pretty much the best pet I’ve ever had.

(I mean he’s the best pet Noah ever had. Because of course Buddy is Noah’s snake.)

Yesterday was Noah’s actual ninth birthday (he got lucky and got his present six weeks early), so while we were remaking this important birthday photo, 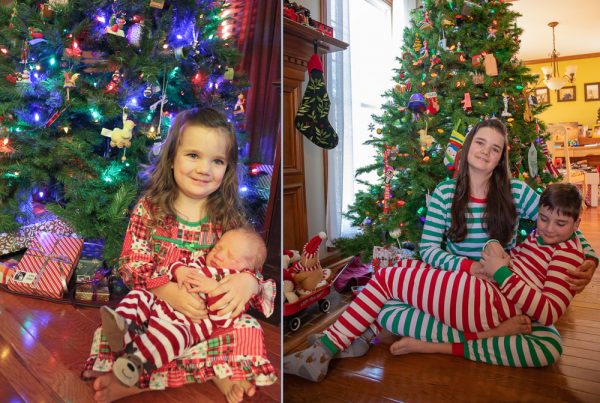 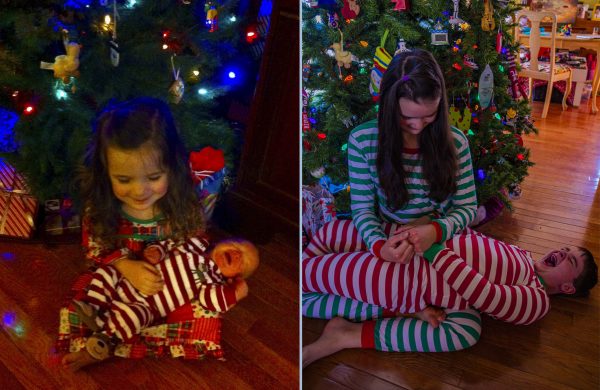 We went ahead and had a photoshoot with Buddy. So that we could always remember what he was like when he was just a wee little precious puppy snake. 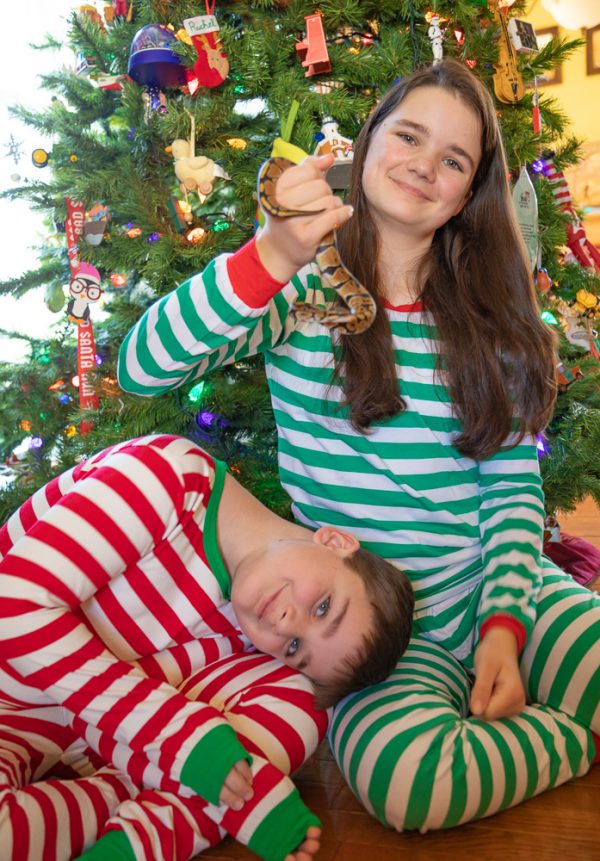 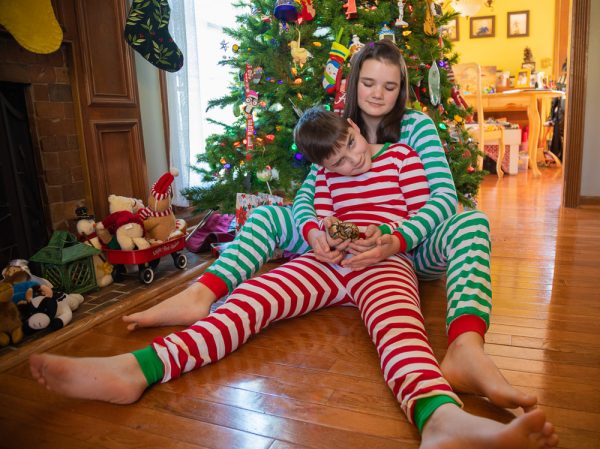 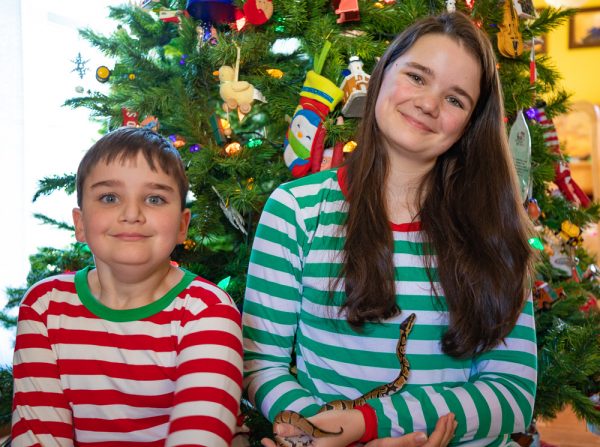 After this Christmas Photoshoot, Buddy has requested a Buddy The Elf Costume for Christmas, but we’ve yet to find one that fits a small creature with no limbs. Hoping that since he KNOWS Santa, his Christmas dreams will come true.

6 thoughts on “Introducing: Buddy The Snake.”