Not-Crazy-Renee is a homeschool Mom like myself. That somehow puts one in a different category of willingness to do bizarre things for educational purposes. Couple that with Not-Crazy-Renee being not-crazy and…well…

So Loulie wanted a pet snake.

Loulie is Not-Crazy-Renee’s oldest child. She and Noah are tight – so much so that they are already planning their marriage, and they both just turned five a few weeks apart.

Noah is not as excited about Loulie’s exotic taste in pets, especially since it would live long enough to potentially carry into their marriage like a slithery piece of unwanted baggage, but Not-Crazy-Renee was all in. I, being one of those rare snake-fascinated individuals, was also fully in support.

For weeks before Loulie’s birthday, Renee was doing research, learning, and logging onto snake forums to educate herself on everything that she needed to know about being a hospitable owner to a pet snake. And there’s way more than you’d think involved – nocturnal hours, proper humidity and temperature gradient so that they can move between warmer and cooler sides as needed, adequate numbers of hides to prevent stress, and much much more. She bought a vivarium (fancy, no?), all the accessories including a unicorn figurine to keep the new snake relationally engaged, and, finally, visited a breeder to procure the snake itself just in time for Loulie’s fifth birthday.

The snake in question is a Butter Ball Python Morph, and Loulie decided to name her Snakey Butters Buttercup – a perfect name to convey the cuddly, adorable aspects of a python. 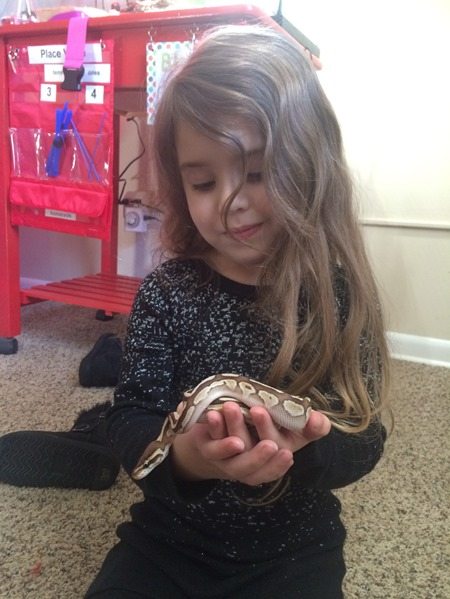 Loulie was very opinionated about the diet of Butterball, though – the recommended diet is one live mouse a week – Hopper sized, no Fuzzies or Pinkies. But live mice are so adorable and Loulie just couldn’t stand the thought of her precious snake killing such a beautiful creature. So she requested that they look into the other, less recommended option – frozen mice.

(Because frozen mice are alienesque and ugly, so their dead state did not bother Loulie at all. Renee is now teaching Loulie the concept of valuing all life whether attractive or not.)

Frozen mice are sold in a box on a block, and you kind of just…chisel off a mouse-in-a-baggy once a week. Then you warm that mouse – carefully – and dangle it in a believably-live way in front of a hungry Python.

It might help to also move the mouse along the cage in a realistic fashion as you would do to get a cat to play with a stuffed mouse – reverse-fishing, if you may.

However, the warming of the mouse is the complicated step.

Mickey is supposed to be warmed carefully and slowly, but time does not always allow careful, slow warming, so despite the warnings on the box, 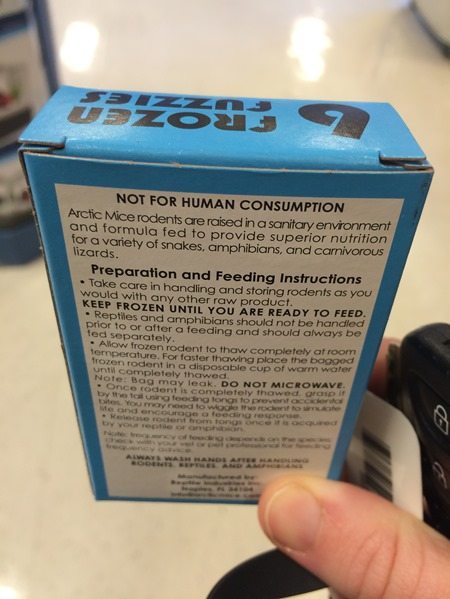 (Not the “not for human consumption” warning – that “do not microwave” warning,)

You might attempt to microwave the poor creature. Thank God I got the full textual play-by-play. If only everyone were fortunate enough to be friends with Not-Crazy-Renee. 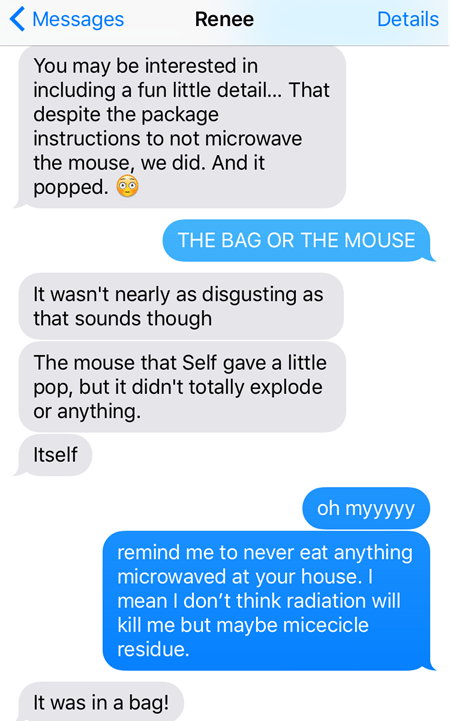 “It was in a bag!!” may be the phrase that Not-Crazy-Renee screams at me, in the tone of “We were on a break!!”, every time I refuse food from her for the rest of our lives.

And I’m okay with that. Especially after this final fact about micromouse.

(Later, Not-Crazy-Renee admitted that when Butterick “snapped that thing up” and gave it a little squeeze, the mouse’s stomach completed the process of rupturing.)

So after the unfortunate microwave explosion incident, they decided to use safer, more proven methods of mousecicle warming. 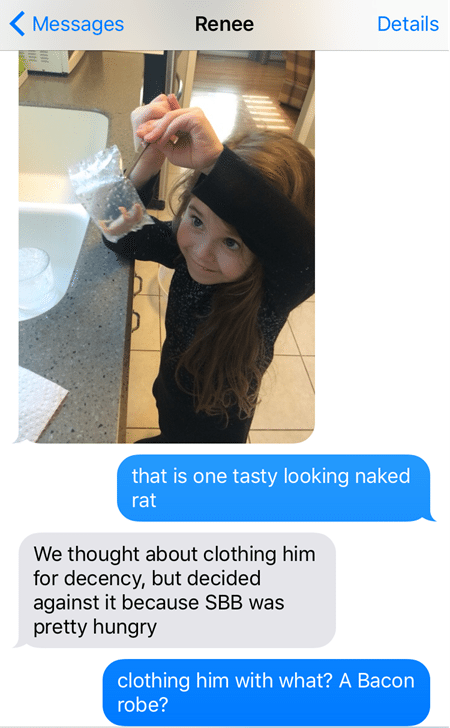 I began to realize that Not-Crazy-Renee was way more into ButteredRice than Loulie (despite Loulie’s obsession) when every time I texted her after her kid’s bedtime, she was in the middle of some sort of snakey endeavor.

Such as this night, 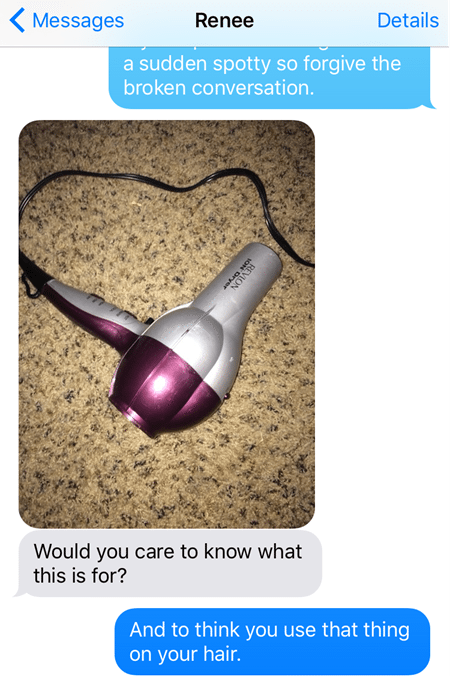 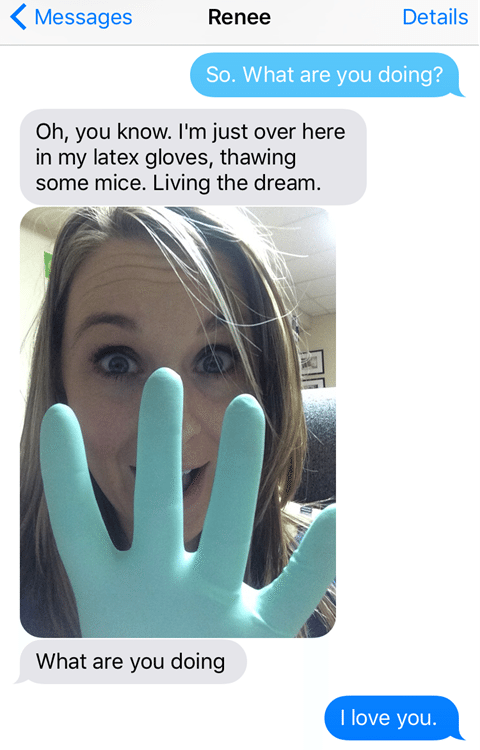 After a few weeks of disgusting mishaps and frustrating feeding escapades,

But still. She wasn’t sure Loulie could handle the cuteness, so she snuck into the pet store to buy the first victim.

“What are we doing here, Mommy?”

“Oh, I just have to run in and get something.”

The only pet store in town that sells live feeder mice is beyond creepy – it’s like the Uncle Joe’s Tot Locker of pet stores. It was the creepiest shack in Birmingham when I was a kid, and it doesn’t appear to have been cleaned in the 20 years since then. Any mouse would be thrilled to escape the noxious fumes and gummy cages to find comfort in the warmth of a snake’s throat.

Renee walked in, turned the corner, almost walked into a random giant tortoise slowly cruising around the store, and found the feeder mice.

The employee fished her one out and asked, “Would ya like me to stun him for you?”

“Well, I’m not going to be using him until tonight, so no…”

“Okay. Well, the way I stun ‘em is by grabbin’ ‘em by the tail and just whappin’ ‘em against the wall.”

Renee stuffed the mouse in her purse like it was some sort of embarrassing personal hygiene item and scurried out, dodging the tortoise once again.

Then took the kids to lunch. 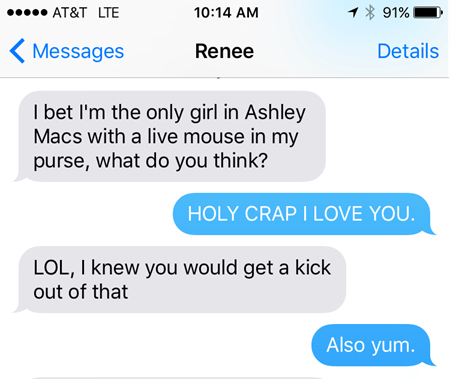 *Yum to Ashley Mac’s, not the mouse.

Renee is a lot like a first-time-Mom with Butternuts, obsessed and anxious and hovering, so she really wanted full control over this first live feeding. She waited until Loulie went to bed, then invited me over to join in her great anticipation of snake consumption.

Snakes are nocturnal and prefer their food at night, so Renee and I sat in her dark basement together, nervously watching her snake under a heat lamp. 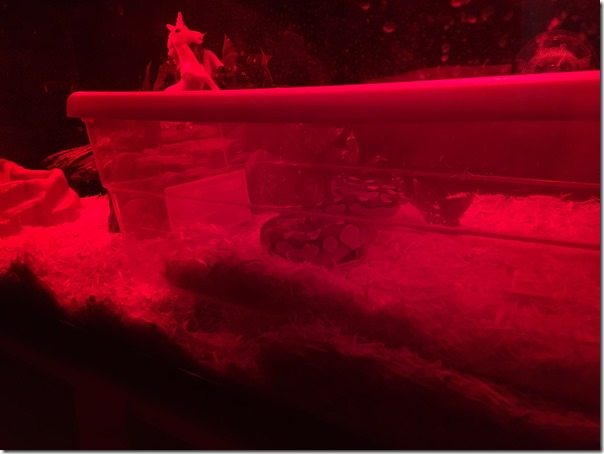 The breeder had recommended that she move ButteredRoll to a different box for feeding to reduce association with home + feeding and therefore also reduce chances of children’s hands getting snapped at when reaching into the vivarium, so she was in Rubbermaid and the mouse was dumped unceremoniously from the light bulb box in which it had been subtly hidden.

As we sat in the dark, Renee waited and hoped that her baby would decide to eat, distracting herself by whispering nervously to me.

“Snakey Butters Buttercup the Second was from a boob egg, which means that one side didn’t calcify entirely and the egg kinda looks like a boob. This makes the snakes smaller and more docile, but I’m wondering if it also makes them a little dense. WHY ISN’T SHE EATING?”

I worked to distract Renee to keep her off the forums while we waited for ButterPecanPancakes to take the plunge and eat that adorable tiny mouse, all while Renee’s husband waited patiently upstairs for Renee to come back so they could watch Making a Murderer.

But first, we needed to make a murderer out of Butterfinger.

She’d tense up, stick her tongue out to smell the fantastic aroma of mouse, then act disinterested.

She literally licked that mouse, and the mouse totally licked her back, but then Buttermilk changed her mind again.

(All while Renee panickingly whispered, “Is that mouse CHEWING ON my snake?!?!”)

This went on for a half an hour, and I began to believe Renee’s observations about the intelligence of a boob egg dweller.

Until quite suddenly, Butterfly uncoiled all the way, arched her head, and took down the mouse in a millisecond.

She wrapped him up, head in her mouth, as the tiny legs repeatedly kicked her in the scales.

So that she could feel the full impact of Mouse Death, I batted Renee’s leg with my fingertips to the syncopation of the mouse’s little claws.

Then when the mouse had been still for a couple of minutes, the swallowing began. 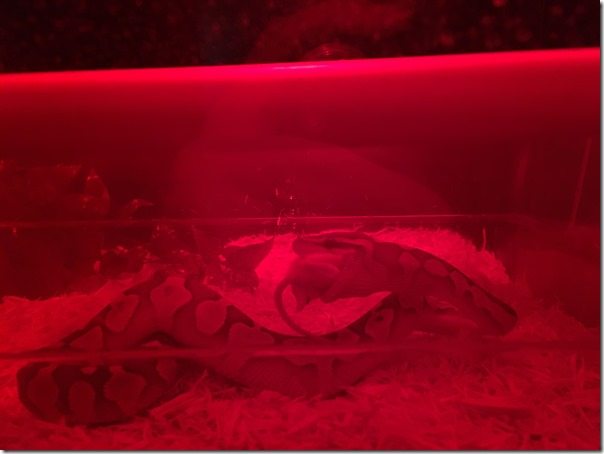 Considering the relative size of the mouse and snake, it was a shockingly quick process. All I could think about was how choked I would be if I were Butterbeer right then. I MEAN.

It was fascinating to watch her throat muscles and scales move up and down as she worked the mouse from her mouth down her throat, until all that remained was a mouse tail, which very much made her look like she was having an after-meal smoke. 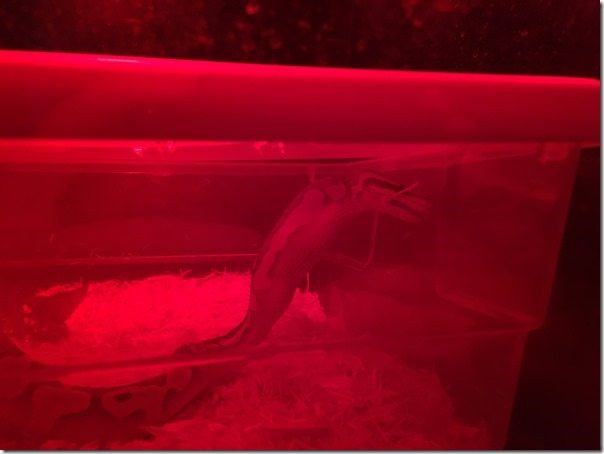 The moment was touching, that first live mouse meal, and Not-Crazy-Renee and I bonded immensely from having shared it. It was as if we’d truly experienced The Miracle of Life together. Or The Miracle of Death. Whatever.

But it wasn’t just bonding for Renee and I – it was also bonding for Butterbean and Renee. The next night when I texted her, no longer was she preparing dead mice in some gruesome and squishy fashion. No – thanks to that tummy-filling live mouse, Renee and Buttercream were able to spend their one-on-one time much more productively. 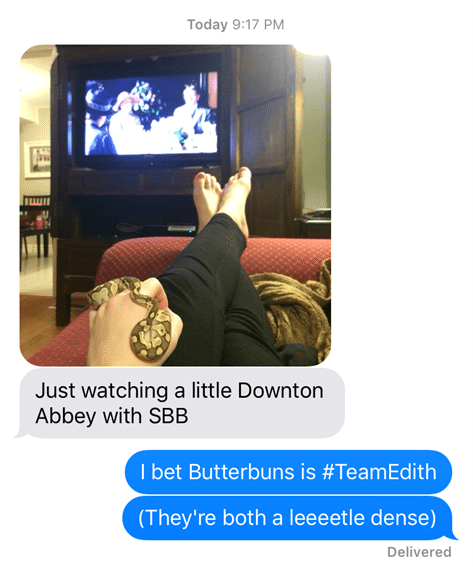 26 thoughts on “Not-Crazy-Renee and the Family Pet.”