In our hiking club, we really only have one rule. (Aside from the obvious rules like don’t pick up snakes but CERTAINLY don’t scare them away because Miss Rachel will definitely want to see them and photograph them and maybe pick them up if she’s mostly sure they’re not venomous.)

The one rule is this: Stop at every intersection.

This rule is a rule because it is a regular occurrence for the kids (especially the older ones but sometimes the younger ones) to run ahead of the adults, who can sometimes be dragging a toddler behind them or on their back or hanging off their legs like a monkey.

On the particular hike for which this post was recorded, I was taking on the responsibility (and fun) of being hiking buddies with Elsa, my favorite first cousin once removed. (Please don’t tell my other first cousins once removed. This is between us.)

(I know you would. It’s fascinating and makes so much sense.)

(Fun Fact: Queen Elizabeth and her husband Prince Philip are third cousins: their shared great-great-grandmother is Queen Victoria, who incidentally was married to her first cousin, Prince Albert. Because the British are weirder than Alabamians.)

…So back to Elsa, who is my favorite of all of my cousin’s children.

Elsa is four, and she’s just starting to grasp hiking expectations, rules, and standards. So she asked me, “Aunt Rachel, (because “First Cousin Once Removed Rachel” is pretty long for a four year old), what is an insterstection?”

I explained carefully that an intersection is anytime you can go more than one way on a trail. If you have to choose directions, it’s an intersection. And it’s very, very important that you always wait at every intersection for the adults, because if you chose the wrong way, and we assumed you chose the right way, you’d be lost, and it would be hard to find you.

She silently pondered my words, an unspoken gravity resting between us of what it would be like to be four and lost in the woods.

We plodded ahead, perhaps a tenth of a mile behind the big kids. As we came up a hill, we saw the big kids all piled in a semi-circle at an intersection. It was a “T” intersection, with a bench sitting opposite of the T. A teenage couple was sitting on the bench, and it appeared that they were having a silent standoff with our kids.

Then the teenage couple stood up, walked toward us, laughing slightly, politely said hi to us, and took off down the trail.

As we reached the children, they were all coughing, waving hands in front of their faces, gagging, and complaining in general about what was the worst skunky smelling cigars they’d ever smelled.

Yeah. That is not a fog of cigar smoke you’re standing in, children.

– Forced the children to stand in a thick cloud of pot smoke,

– Created an awkward staring/social interaction, because the poor high teenagers had no idea why 10 children had just crowded around them in a semicircle.

(They’re probably still puzzling about that. I bet every time they get high they’re all like “yo, man, remember that one time, when all those kids surrounded us like they were the freakin’ Marine Corps or something?” “Yeah man. That was….weird.”)

Were the children better tempered for the rest of the hike? 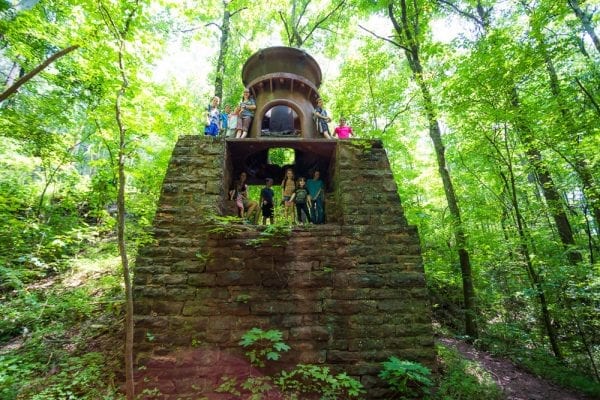 So maybe The Intersection Rule didn’t fail us after all.

(Then again, twenty minutes later, Noah did get exceptionally hangry and demanding as to why I hadn’t brought SNACKS on the hike, so the dreaded munchies may not have been worth it.)

5 thoughts on “When The Intersection Rule Failed Us.”