****TRIGGER WARNING****
This post contains pictures of actual snakes. And of me holding one of those actual snakes. If you have a fear of snake photos, this post isn’t for you. Here’s a beautiful Luna Moth for you to look at and then just go ahead and click off of this page. 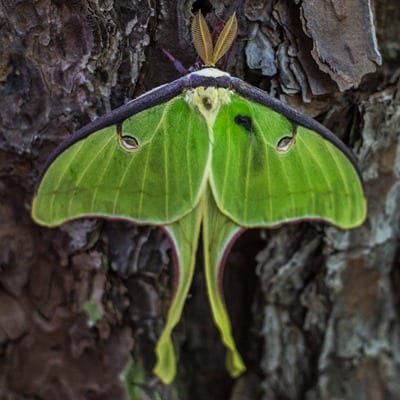 It’s really bizarre that it’s still considered Spring – or bizarre in Alabama, at least. But it is. Despite the 90 degree temperatures and the daily risk of dehydration, I keep reminding my whining children, “OH YOU JUST WAIT. You’ve forgotten what Summer even feels like.”

Because I’m an encouraging, uplifting, understanding mom like that.

But. This Spring has been a delight for a wildlife-energized person like myself (what kind of vert are you if you’re energized by reptiles and amphibians? Maybe I’m not an introvert after all – I’m a reptivert.) Because, at least in Birmingham, the snake population has exploded.

(This may not sound like good news to the rest of you. But I promise. It is. Snakes are our friends. Well, most of them. And even the ones that aren’t our friends aren’t nearly as scary as you think.)

We’ve seen plenty of lizards and toads and turtles as well, 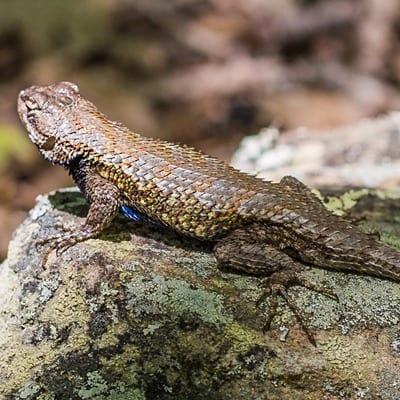 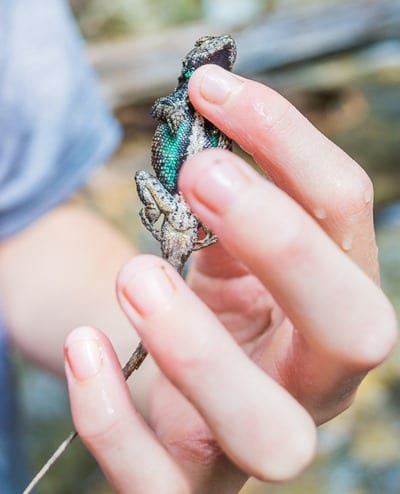 We found another one that had more of a teal belly. 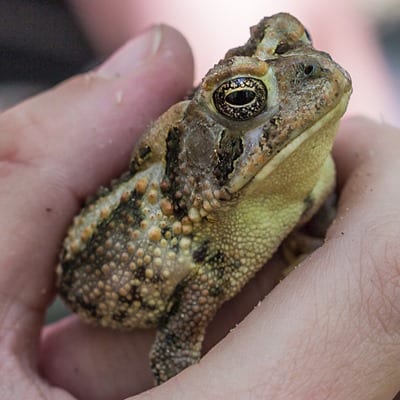 Eye of Toad fascinates me. 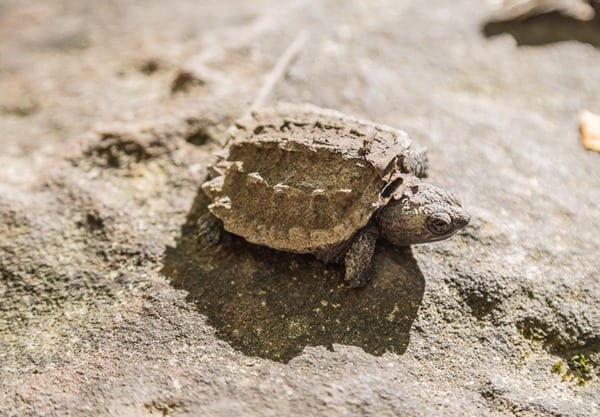 This was a tiny baby snapping turtle. Not so scary when they’re miniature. But still just as prehistoric.

But the Snakes, They have been especially remarkable. I have literally seen more snakes in the wild this year than I have seen in my entire life – and that is not an exaggeration. Whatever happened this winter, it was perfect conditions for Snake Babymakin’. I have even lost count of how many we’ve seen – which has never happened in the history of ever.

It all started with a friendly King Snake that we found when it was still cold enough for me to easily catch and hold him (yes. I do hold snakes in the wild. Usually after I confirm that they’re not venomous.) 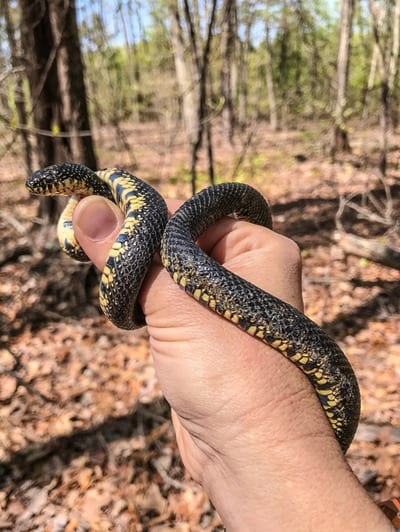 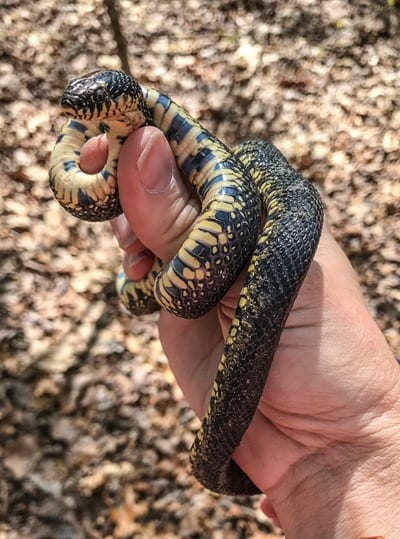 He let all the kids pet him and was happy to be our friend, and even stuck around for a minute after I put him down, then slithered off to do whatever it is he does when we’re not around to entertain him.

After we saw him, snakes began showing up everywhere. In years prior, I’ve mocked people who stay out of the woods for fear of snakes – I would tell them “We hike all the time, I actively look for snakes, and I can never find any! The chances of you seeing one are nearly zero.” We would see snakes on maybe one out of every 50-75 hikes. But this year, they’ve been increasing to the point where we’ve recently seen a snake on almost every hike, and earlier this week I saw a snake a day for three days in a row. 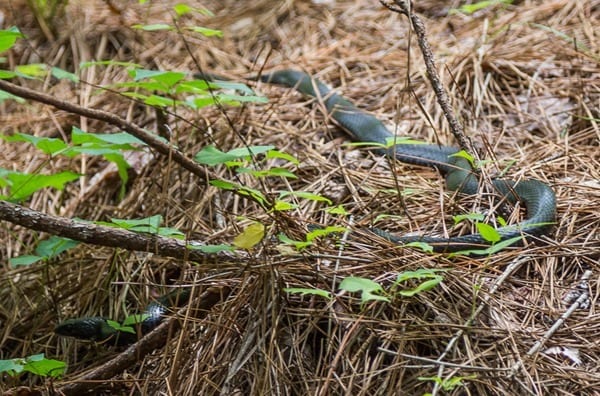 I climbed a small hill to get a better look at this guy, who I thought was another friendly King Snake. Turns out he was a Black Racer (also not venomous), which he proved by shooting down the hill at a spectacular speed headed straight for the rest of my hiking party, then made a sharp right turn and raced down the trail and back up the hill far away from me. I don’t know if my sister-in-law has forgiven me for the increase in heart rate that she may still be suffering from, but to experience how fantastically fast a rather large Black Racer can move was totally worth her unending ire.

I told you about his first rattlesnake find in this post – where Noah saw it while we were taking a group photo (and apparently the snake did not want to be a part of our selfie.) 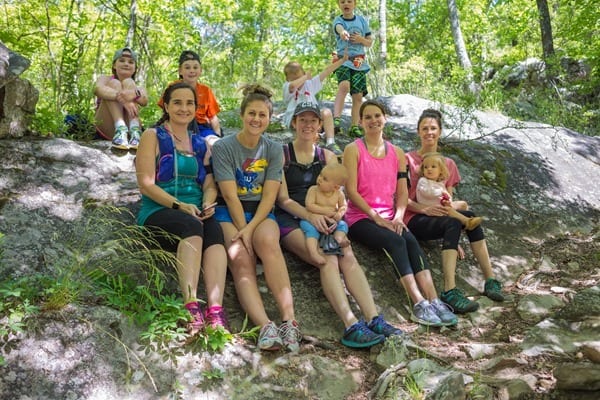 Us, with Noah pointing at a snake… 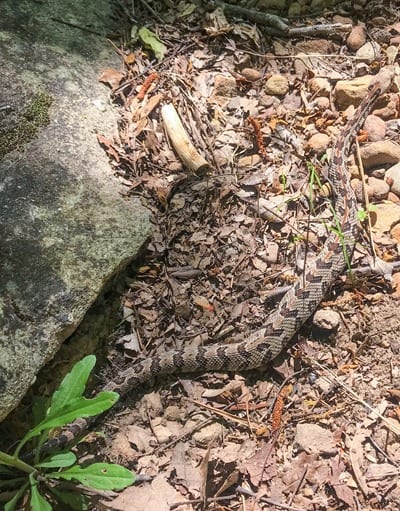 The snake, right in front of the group but oh-so-hard to spot – for everyone except Noah.

I misidentified it as a Copperhead, knowing that it was venomous but not recognizing the rattlesnakiness of it. But I had my favorite Twitter Biologist, @AlongsideWild, identify it for us.

Then, just a few days ago at my parent’s house, Noah, Ali, and their cousin Tessa went for a walk. My parents have a few acres of woods with trails on it, and my Dad had told them that they could go for a walk if they stayed on the trails (which they know very well) and came when he whistled for them.

A little while later, Dad whistled, we heard Noah yell “We’re comin’!!” and a few minutes later they showed up as promised.

Which is when they told us that during their hike, Noah had spotted a snake.

He had calmly stated, “Snake.”

The girls couldn’t see it, so he carefully pointed it out and said “It’s a baby Timber Rattlesnake.”

They all quietly walked away in the other direction and continued on with their hike until Dad whistled them back.

I asked Noah to take me back to the snake, partially because I love observing snakes and partially because I was very curious as to his identification accuracy. As we walked, he told me about the characteristics of the snake – “It had stripes like the other Timber Rattlesnake we saw, and a triangular head. But I don’t know many snakes, so it could have been a different kind.”

Considering that I rarely correctly identify snakes on the first try, I was skeptical.

When we arrived, the little baby was in the same place, and I snapped a few pictures of him while Noah tugged on the back of my shirt and asked if I could please get further away. 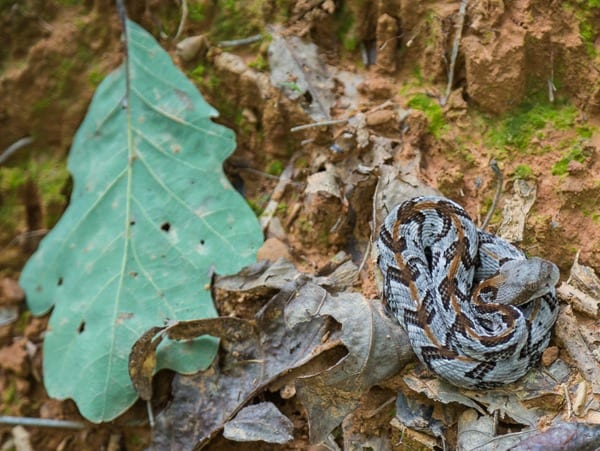 I sent the picture to @AlongsideWild, and he confirmed: Noah had been right. It was yet another baby Timber Rattlesnake.

I had never been prouder of Noah. For his eye to spot it, his calmness in making the girls aware of it and then redirecting their hike, and for his accuracy in identification. He might not have the same love and excitement for the snakes as I do (which, hey, is probably a good thing since he’s a seven-year-old boy), but he’s proven himself as the better amateur herpetologist.

And of course I was fascinated by the snake itself. Although the pattern was the same, his markings and colors were so much bolder and a different color palette than the last Timber Rattlesnake we saw – it was as if they were each wearing a different shade of camo. The brown one was much creepier because of how well he blended. 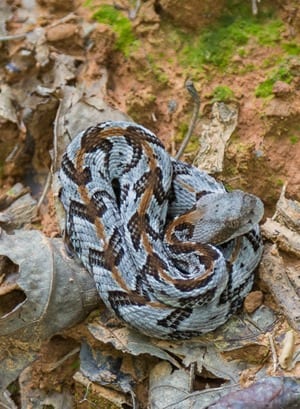 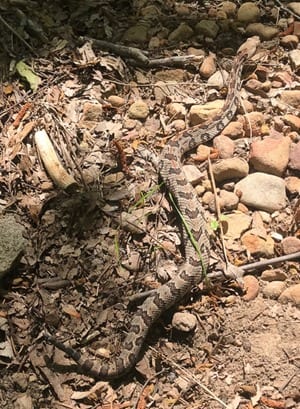 But despite their color differences, Noah recognized their like characteristics and knew they were the same kind of snake.

So. If you’re not so sure about the woods and need a guide that can keep you safe, Noah is your guy.

Editor’s Note: If you think I’m being rather nonchalant about a dangerous animal, snakes don’t want to hurt us – they have better things to do. And remember – I live in Alabama. Everything here can kill you, from the plants to the animals to the weather. If you need a refresher course, read this post. But it’s still totally worth it to live in this beautiful state.

7 thoughts on “The Snakiest of Springs.”