I had been a happy FitBit wearer for three years. It motivated me, gave me beautifully geeky tracking tools, created new friendships, and fed my obsession with statistics.

Yet, at the beginning of October, I replaced my FitBit with an Apple Watch.

And then, on December 22, I found myself 126% overjoyed because I convinced Apple to give me a full refund for my Piece-Of-Crapple Watch (even though it was way out of its return period), and I bought myself a new FitBit.

Here is the story of that massive life turning point, if you happen to care.

I am an Apple person. I have a MacBook Pro, Chris has bought me every new iPhone since the 4 (except this year because what was the stupid deal with the 8 and X? And what if I wanted a 9??), and we have a couple iPads in the house. I love Apple products. So this year, instead of getting a new iPhone (8 or X, 8 or X, how can I make that decision?), I decided to try the watch. It was the first year that the watch had cellular, and I dreamed of being able to run, and track my runs, and answer texts and calls, without my giant iPhone 7 Plus strapped to my arm.

And after all – it’s Apple, so it has to work even better than a FitBit, right?

I almost changed my mind due to the heart rate monitoring. Although Apple said they gave this watch the feature of being able to let you know if you had heart issues (sounds like it’d have to be pretty accurate to do that), it also said it only checked your heart rate every ten minutes (how is that helpful.) For someone who had become accustomed to her FitBit checking her heart rate continuously (and for someone who has an illness that can be partially managed by tracking the heart rate and adjusting life to “fix” it when needed), this every ten minutes bit seemed stingy.

But surely Apple was better than FitBit. How could it not be? IT’S APPLE.

I’m sure the Apple watch is just lovely for people who use it for other things. Or for people who are not used to the supremacy of FitBit. But if you’re a FitBit loyalist and think you can get the same brilliantly simplistic tools out of Apple, you will be disappointed.

The first weekend I had mine, I could not get anything I wanted.

…It was checking my heart rate even less than it advertised – sometimes going 45 minutes between checks.
…The cellular didn’t work most of the time.
…The app I used to track runs (MapMyRun) didn’t get along with the Apple Cellular, and the app Apple preferred you to use (Nike+) didn’t get along with my app, which had all my historical data in it.
…The heart rate monitor would be wildly inaccurate, giving a reading of 220, immediately followed by 53. How are they supposed to be able to let you know if you have unusual spikes in heart rate if a.) they hardly ever measure it, and b.) when they do, it’s insanely wrong? FitBit figured my calorie burn based on my heart rate, whether accurate or not, and I loved that. How possibly could Apple even think they were doing that?
…The information the watch offered was both way too detailed to be useful and not giving the easy details I was used to, and therefore was not in the least bit motivating.
…The apps I use while I run, such as Spotify and Audible, did not have watch apps. So no music or books on tape while running.
…I had to charge the watch every…dang…day.

The only benefit I’d seen from the watch was the ability to text from the watch. And that was not worth what I’d paid for it and what I’d given up for it.

But I had made this decision, and I wanted it to work. I spent at least eight hours on the phone and on chat with Apple support that first weekend, methodically walking them through all of the problems with the watch interface. I had thrilling conversations such as when they told me to change a privacy setting so they could do a test… 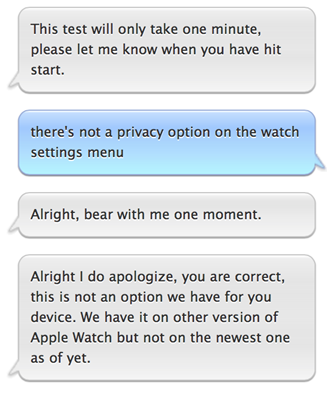 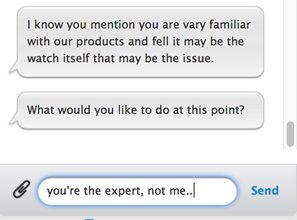 For some reason I believed them when they told me that it would get better, and that the heart rate data was accurate, and that the data was saving even if it didn’t show on my watch that it was.

I spent money on at least eight apps just trying to get the simple interface that FitBit had always given me so effortlessly. 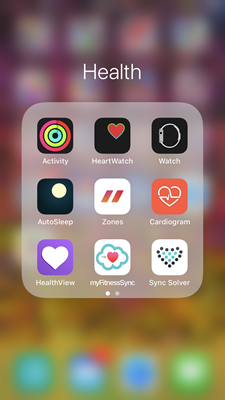 Most of the apps were wildly information-overload with little actually useful information. I’m not a car. I don’t need five odometers. I want graphs. 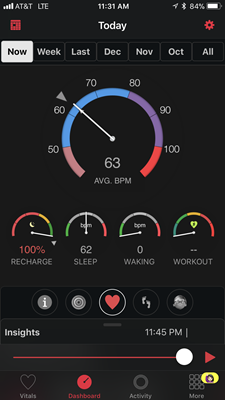 One App even had a man who got fatter and skinnier throughout the day based on your activity – not the feeling I was going for. 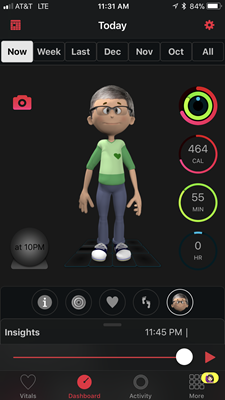 The app called Healthview nearly gave me what I wanted, 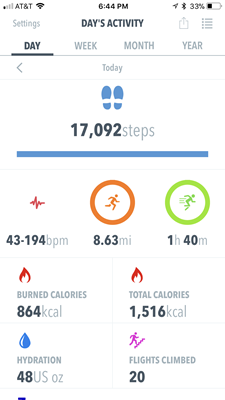 But not a single app in the world could take the ugly Apple Watch heart rate data and give me the nice, simple, daily graphs that FitBit gave me. 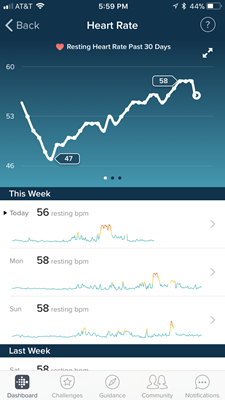 This was Apple’s idea of a weekly heart rate graph: 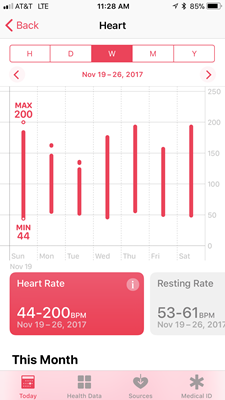 HOW is that helpful??

And the weird daily bar graph just wasn’t the same. 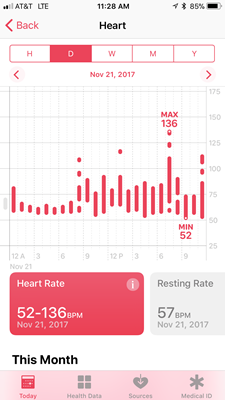 It did nothing to satisfy the desires of my over-analytical needs. And it just made my heart cry out for its old companion.

But I had paid a lot of money for that watch and I had missed the return window trying to give it the benefit of the doubt, so I tried my best to have a good attitude about it, and to convince myself that I liked it, that it was useful, and that I did not miss FitBit as if it were my soldier husband who was gone on a twenty-year deployment.

It was grocery shopping for Christmas that finally did me in. Noah and I had a lot to buy, and we were in the grocery store for a record long (for me) 45 minutes. As we walked up to the checkout line, I glanced at my watch. It hadn’t taken my heart rate the entire time.

Which meant I got no calorie burning credit for ALL THAT SHOPPING.

And if you can’t have an app tell you that you burned calories, did you even burn calories at all?

I quickly went into the raw data in the health kit of the phone (as the techs had taught me to do, when they were proving my data was there all along), and “AHA”’ed with malice.

My data was not there. The watch was useless.

I threw the groceries in the car in angry passion and immediately called Apple support. I told them their watch didn’t do what it was advertised to do and I just wanted to go back to FitBit SOOOOOO bad and please please please give me my money back.

She put me on hold again.

By the time that I had driven home, unloaded the groceries, cleaned out the Thanksgiving leftovers from the fridge to make room for the Christmas groceries, she returned with The Best News.

“The sales department has agreed to let you return the watch as a one-time courtesy since it doesn’t do as it was advertised at this time. You will get a full refund.”

I had tried not to allow myself to dream of this moment. But I had, and in my dream, I imagined that I would feel some sadness toward losing the Apple Watch.

But that imagining was wrong.

I whooped with joy and immediately got online, ordered myself the top of the line FitBit Ionic watch (I had given my former Altra HR Chris), set it to be picked up at the local Target, went to Target on the Friday before Christmas, and had my new FitBit Watch on as I drove to FedEx to ship my worthless Apple Watch back to whence it had come.

I am overjoyed to be reunited with my pleasing graphs and charts and my FitBit friends and challenges. The Ionic can do nearly everything I used my Apple Watch for, except better. AND now my FitBit system is significantly upgraded to be able to GPS track my exercise. The only two things I lost were the ability to talk to Siri (I can do that on my phone) and my ability to text from the watch (which I rarely used.)

And I am SO happy.

So, FitBit, I am sorry for ever leaving you, and for ever doubting that Apple could do it better. It was wrong. You are my Fitness Father. It won’t happen again.

4 thoughts on “The Prodigal Fitbit Daughter.”