On Proving that The Mayflower > The USPS

January 2, 2018A Day in the Life, Fun With Roadkill, Just My LuckRachel Callahan

That’s where this story begins.

It was the day I received an order from England for one of my Roadkill Calendars*. 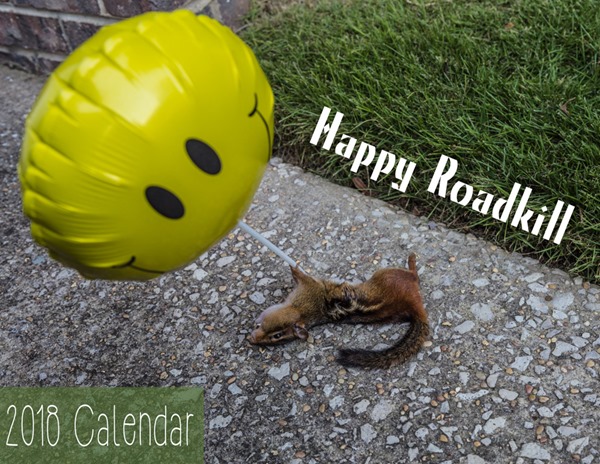 The USPS website allows you to buy international postage online, which is nice – because filling out a manual customs form is comparable to shoving a full-sized male Gorilla into a Ziploc snack bag – no international address actually fits into the tiny fields on that microscopic form.

The very day I received the order, I printed my label.

Except that I noticed no postage printed alongside the customs form.

I went through the process again to make sure there was not an additional form to print, and there wasn’t.

I shrugged, assumed the post office was doing things differently now, and dropped it off to ship.

A few days later, the package showed back up on my doorstep, with a handwritten note on it: 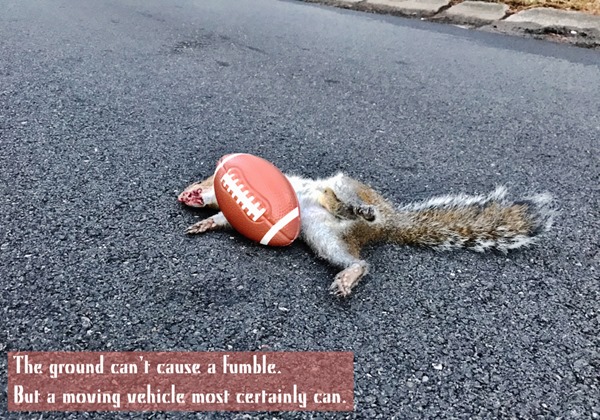 I got back on the website and paid the $13.50 international postage again in the attempt of saving myself from a visit to the actual post office. It is a place of unspeakable horrors, as Portlandia so accurately portrayed:

But after I went through the process again, it printed off exactly as it had before: without postage.

So I gathered both receipts, the package, the new and faulty label, and as much bravery as I could muster and went to Local Post Office Number One in the late afternoon, riskily near closing time.

The parking lot was nearly empty, so I felt that the stars of postal fortune had perhaps shined upon me.

I walked in and was overcome by the smell of hopelessness.

There was one worker and one customer, and it was apparent she’d been there a while. The male postal worker helping her laughed maniacally when I walked in. He yelled over to me,

“Whatever you need, I cannot help you.”

I looked toward the counter. There was a pile behind him, a pile in front of him, and this pile had not yet been moved over to him: 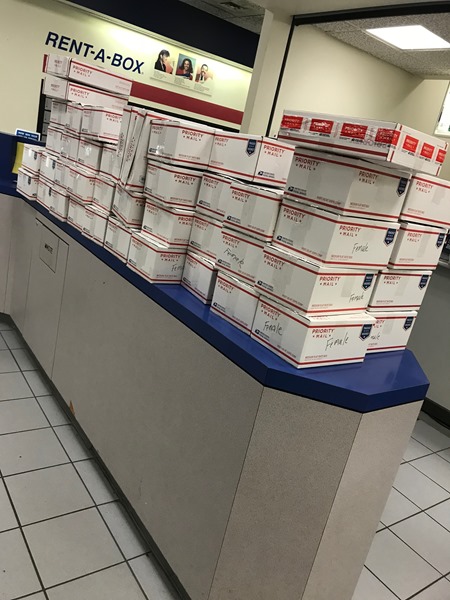 Every few seconds, he made a sarcastic comment to the customer. 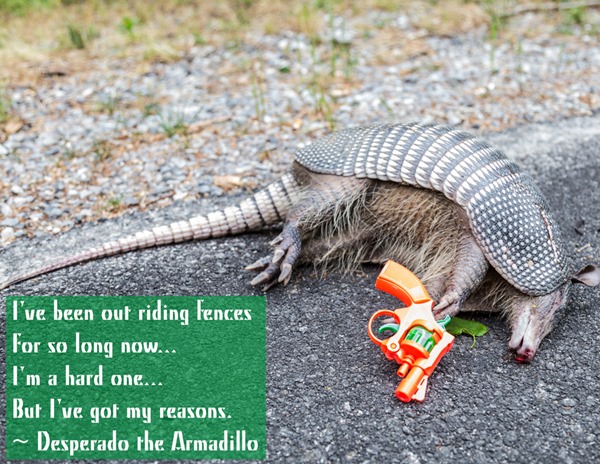 …all while glaring at me in the attempt to intimidate me into slinking out in the SHAME of coming in while he was dealing with this tragedy of over-mailing.

I peeked at her stack of boxes: they were Christmas presents for overseas troops. This fact did not make Mister Postal Worker any less Grinchy. 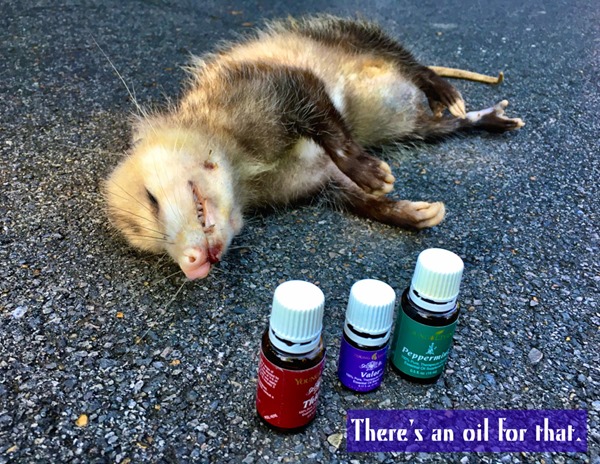 But the stars shone upon me and a shimmering unicorn walked out of the back room. Or rather, a smiling postal worker – same difference.

She asked me what she could help me with and I explained my issue and presented my receipts.

“You paid for this package twice? My goodness, honey. You shouldn’t have done that.”

She inspected the package’s markings and said while shaking her head, “Mmm, mmm, mmm, those idiots at the downtown Post Office sent this back. They are SO STUPID. They should know better!” 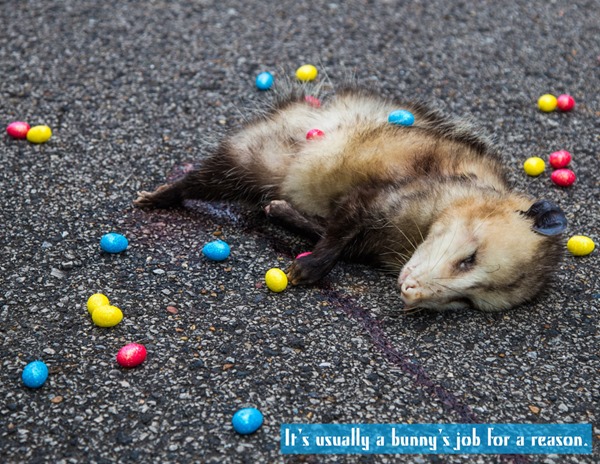 She took out a black Sharpie and wrote on the package, “Postage Paid!!”

A few days later, like a stray cat that can’t take a hint, it showed up on my doorstep for the second time. 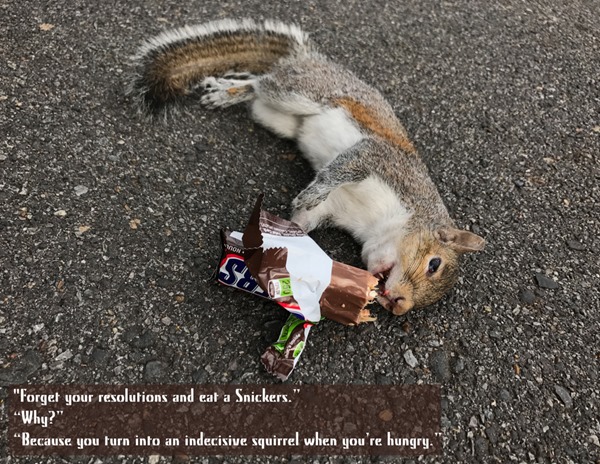 This time it had a note, also written in Sharpie, that said “No postage – writing ‘postage paid’ is not postage.”

It was late November by now, so the lines were beginning to swell with holiday anxiety. I waited patiently for ten minutes while my children waited not-so-patiently.

“I am hoping that you are an expert. I just know you can help me solve this.”

I explained the saga. I displayed my receipts. I pleaded for mercy.

“I can’t help you with that. You need to take it back to Local Post Office Number One. They have a manager over there.”

I tried not to let my tears stain the post office floor.

Instead of taking his advice, I decided to take it to the Scene of the Crimes: I would go to the dreaded, the formidable, the horror movie of The Downtown Post Office. 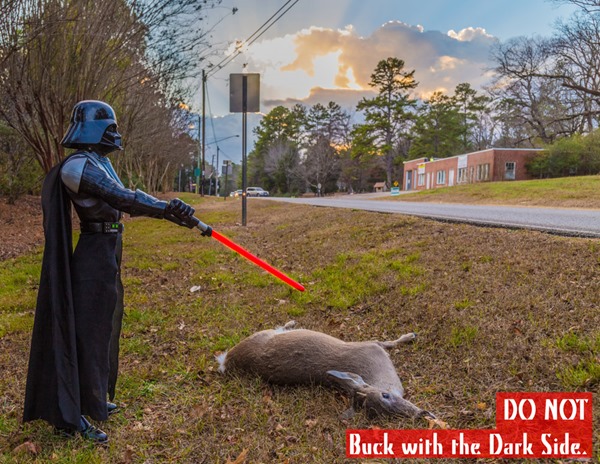 I left my kids with Chris and approached the office with a respectable dose of fear.

A man talking rapidly on the phone was coming out of the front door as I approached, and I slipped through the door.

He turned around, huffed loudly, and angrily barked toward me, “You’re welcome!!”

a. He didn’t even really hold the door for me.
b. He was on the freaking phone in mid-sentence. Was I supposed to interrupt him to thank him for his sub-par gentlemanliness?
c. He is absolutely the kind of man who believes that buying a woman dinner on a first date entitles him to immediate relational benefit. And this realization made me want to vomit on his fancy wingtip shoes.

This encounter set my Downtown Post Office visit in motion just the way I expected it to go. 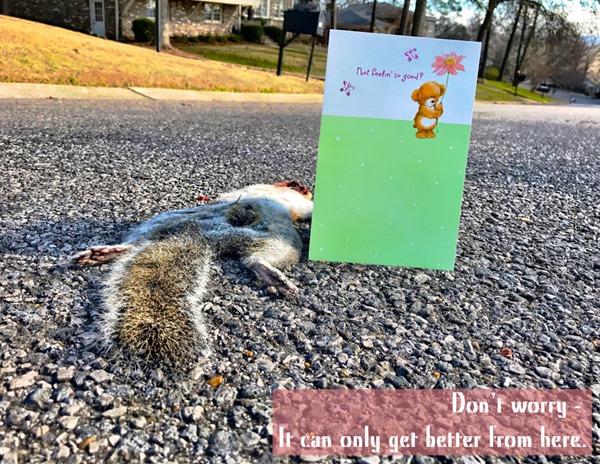 The line was the kind of line that you could file your taxes, read a Jane Austen novel, call and comprehensively catch up with your best friend from 4th grade, and knit an ugly Christmas sweater all before being granted the privilege of being Next In Line – and I’m pretty sure there were people in that line doing all of those things.

I approached the counter with a look of humble gratitude. I pulled out my growing Package Dossier. I explained my case.

She looked at it all quietly, then said, “I’ll have to talk to my manager.”

She left me. She left me for so long I almost had abandonment issues. 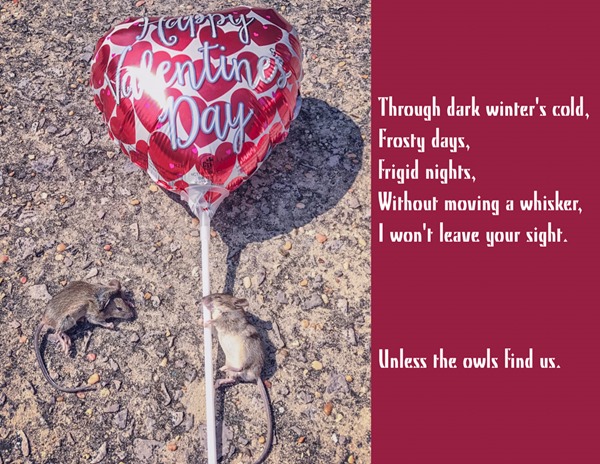 She finally returned, looking a year older. “He said the online postage system has been messed up lately – he’s seen other international packages come through without the postage printed correctly also. He told me to just print you the postage and it’ll go through just fine.”

Thank goodness. I came to the right place. And also I’m not crazy – I did nothing wrong when buying postage.

She started entering in the address.

“That’s what the online system charged me…”

“Well, online gives a discount, but I can’t. Hold on let me go check with my manager.”

Depression gripped my heart as PTSD Abandonment Issues set in.

Days later, she came back.

“He said I have to charge you the difference. So you’ll need to pay nine dollars.”

She printed postage for nine dollars. I paid her. She said, “This should do the trick. If it doesn’t, come back.”

That was not the hope I was looking for.

Two weeks passed. I felt sure my package had made its voyage across the sea. I mean, HOW HARD COULD THIS BE?! Angelica sailed back and forth between England and New York multiple times during one act of Hamilton. If Angelica could do it in the 1780s, surely a few pictures of roadkill can make the journey before 2018.

Then came the Friday before Christmas. I was in bed recovering from surgery. 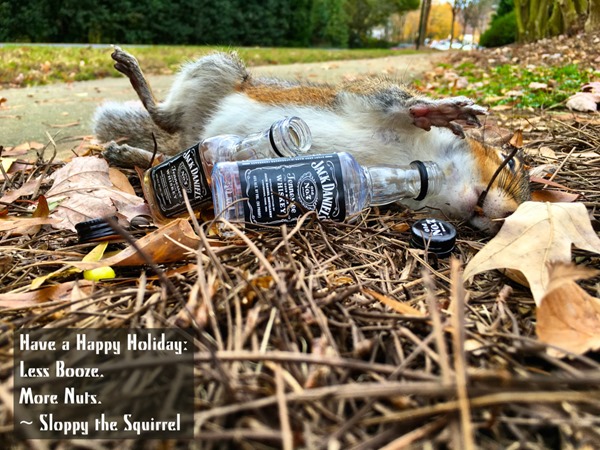 Chris got home from work, walked into the bedroom with his hand behind his back, and said “You’re never going to believe what was on the front porch.”

“A slaughtered raccoon from that stray cat who won’t take a hint?”

He pulled the envelope from behind his back.

I nearly popped my incisions from screaming.

He set the envelope in my lap. That poor package was battered, abused, and humiliated. 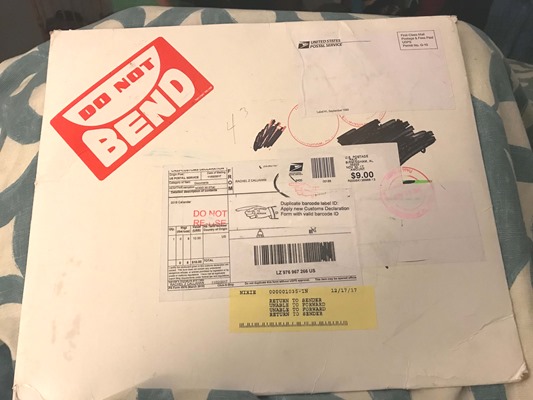 This time it had come back, according to the sticker, because the barcode had already been used.

…The scribbled out Sharpie messages…

The envelope itself was a calendar of my November and December.

So, the week after Christmas, I decided to go back to where it all started.

I took a fresh envelope, my stack of receipts from all former post offices, and resigned myself to filling out a fresh customs form – by hand.

As I waited in line, I began the process of rewriting everything. Which is when a man and his son who had been standing behind me decided that I was a prime target for line-cutting. They nonchalantly stepped around and in front of me.

But it was the wrong post office visit to mess with me. I had endured the sarcastic You’re Welcome guy. I had endured the cruel postal worker who didn’t want to process packages for the troops. I WAS NOT GOING TO JUST TAKE A LINE CUTTER.

I pushed around them and took back my place. “I was in line before you.”

“Oh, sorry.” They stepped back a step and looked at each other as if I had a crazed look in my eye (I’m sure I would never.)

I held my shoulders high with the ecstasy of not being taken advantage of (by anyone but the United States Postal Service.)

I hefted my sheaf of documentation up on the counter.

I walked the clerk through a Masters-Level education of what brought me here, to her counter, today. 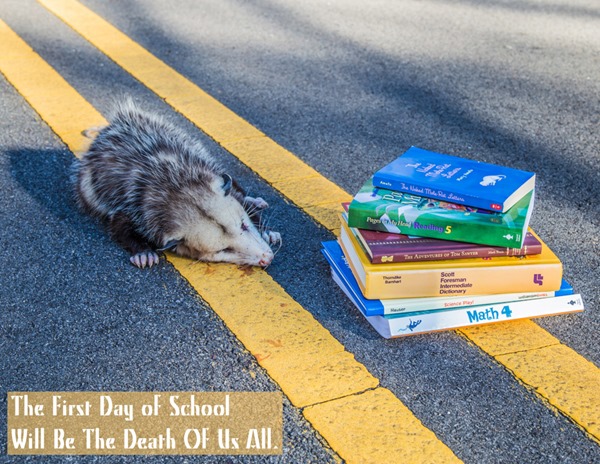 She sighed and shook her head.

“Okay. We need a new barcode. And new postage. And I think we can make this work.”

“Do you want me to use a new envelope since this one is so wrecked?”

“No. Let’s leave part of these stickers the same.”

She read my customs declaration. “This is a calendar, huh? What year is it for? Please say it’s for 2020 – because that’s probably when it’ll arrive.”

“Right? The Mayflower sailed from England to America quicker than this package is getting from America to England.”

“You are so right about that, honey.” She taped my freshly handwritten customs form onto the package.

RIGHT OVER MY ADDRESS.

“Um, I trust that it’s going to work this time, but you just covered up my return address. If perchance it doesn’t work, I really want to be able to know it.”

She sighed, ripped it up, salvaged my address, and re-taped it. I pondered whether this could be a DefCon Nine Postal Worker Solution to a problem package: if you make sure it ends up in the Eternally Lost Package Bin, the customer can’t complain again. 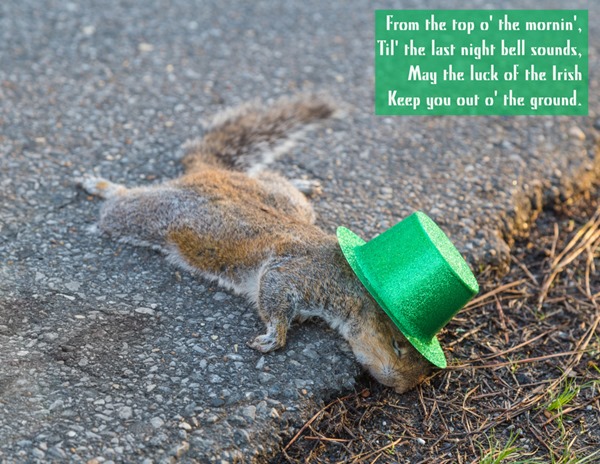 And this is where we now find ourselves.

My confidence level regarding this fifth attempt is at about 32%. I fully expect to see that mangy package cuddled up to my stray porch cat any day now. 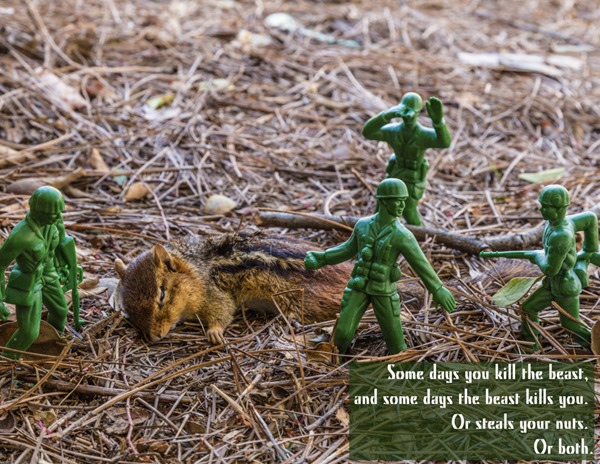 * Roadkill calendars are sold out, but if you find yourself in desperate need of one, I can still special order them. Unless you’re in England. Then forget it.

9 thoughts on “On Proving that The Mayflower > The USPS”