So the kids and I took a road trip recently to South Carolina. I haven’t shared this news here because it’s just too tragic to talk about, but Not-Crazy-Renee, best neighbor ever given to a blogger and star of the Package Thief saga, and the holiday houseguest scarer; the owner of a snake and the asker of me to buy a mouse and feed her snake; and unrelated to the previously mentioned reptile, co-star in the venomous snake / fake boob story, moved – out of state.

Besides my exquisite loss of a neighbor/friend/blogging material, Noah and Loulie were the best of friends (after they got past the whole Grasshopper Incident), so it has been a difficult loss for them as well.

It has been four months since they moved, so the kids and I decided it was high time to go visit. The reunion between Noah and Loulie was movie-cover-worthy. 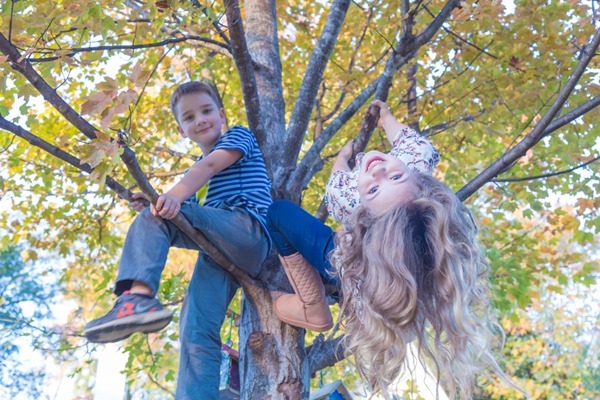 Think “My Girl” but without the bee stings. 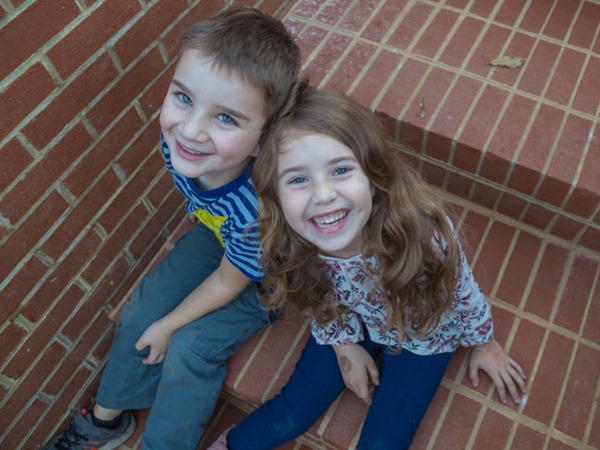 Since we were going during the workweek, Chris couldn’t accompany us, which meant that I would be driving. So I needed an audio book – something I could absorb into as well as the kids – something that would make the trip go by quickly.

Of course I waited until the very last minute before walking out the door to browse Audible, and after getting to the appropriate category, I kinda picked the first book that came up. It looked interesting, had a pretty cover, and seemed to embody the engaging world/adventure book that I was looking for. I barely noticed that it had just been released from a brand new author two weeks before.

But I couldn’t have picked a better book of I’d browsed Audible for a week.

I have read nearly every series that has been dubbed “The Next Harry Potter”, and they’ve all disappointed me. But. Nevermoor, The Trials of Morrigan Crow actually could be that very thing. We listened to the first four hours on the way to South Carolina, and I immediately ordered the hardback book so that it would arrive at my house before I did – I wanted to read these beautiful words on the page with my eyes and not just my ears.

The world she creates pulls you in and makes you desperate to know more. The characters are superb, and the imaginative twists and details are well-crafted and fit together perfectly. My biggest problem with this book is that it just came out on October 31 and I’m going to have to wait for FOREVER to read the next one, but regardless, it stands alone as a fantastic book (as much as I love the Harry Potter series, I don’t know that I’d say the same about that first book.) So I’m calling it now: if she continues this series with the quality of the first book, this absolutely will be the next mega-hit of a children’s book series.

Several of you thanked me for my last book recommendations and asked for me to keep sharing, so here are a few more I’ve read and thoroughly enjoyed since I wrote last:

– This is one of those books that you know is special from the very first page. And better yet, it is the type of book that is so delightful to read, thanks to the dialogue and language, that you don’t want to rush through it just to find out what happens. I do love a book that can just allow me to immerse myself in its delightfulness without filling me with dread or suspense. When you need a book to simply make you feel happy inside, read this one.

The Serafina Series – I’ve only read the first two (of three) and enjoyed them immensely. I was taken aback at first because it was nothing like I expected – I knew that the setting was the Biltmore Estate during its short tenure of actual use as a family home, but what I wasn’t expecting was the dark, sinister, creepy nature of the books (they’re children’s books and I’m pretty sure Ali would be terrified.) But they are extraordinarily well-written, and they both stuck with me for quite a while, allowing me to mull over their characters and plots. I’m looking forward to reading the third book soon.

Paper Towns – First, a guilty confession – this is the only John Green book I thoroughly enjoyed. I desperately want to like him because a) he went to school in Birmingham and wrote extensively about that experience (Looking for Alaska – I loved the first half of this book) and  b) I adore his educational YouTube channel as a homeschool teacher’s aid, but his need to weave tragedy into his books exhausts me. I want to be mostly happy when I read. (the only other exception is An Abundance of Katherines, which was a fun but slow-moving read.)  I have even already read his newest book, Turtles All The Way Down, and although it wasn’t as tragic, it was very hard for me to read, as someone who has struggled with anxiety in the past. His descriptions of anxiety in the book were so real that it made me feel anxious about being anxious again. I finished the book in a hurry just to get out of that headspace. But I very much did enjoy Paper Towns – I liked the characters and the mystery feel of it. (Oh and for the record – I have not read The Fault in Our Stars. I’m currently on John Green Strike, and I was saving that one for last. Tell me I won’t hate it. I want to read it but I just know I’ll hate it.)

Attachments – This was a fun “back in the old days” book – it was written in 2012, but it’s about 1999, right as email was taking off in the workplace. As I haven’t worked in an actual office since 2006, this was a fun read for me of reminiscing to those days. Plus, it’s just a happy story. This is another all-smiles read for when you don’t want your brain to have to feel overworked.

But forget all those books. The only one you need to be reading RIGHT NOW is the one about Morrigan Crow. You’ll thank me later.

4 thoughts on “Stop What You’re Doing and Read This Book.”