As I was driving down Highway 280 on Saturday afternoon, lost in thought about all I had to accomplish in the next day and week and year and lifetime, I approached a set of flashing police lights in the median. I slowed down, as one does, out of caution and to ensure that it wasn’t a tricky speed trap.

The cars in front of me slowed as well and then we all slowed much slower than we should have slowed because what was going on was super curious in a fantastic sort of way.

The median was only a few feet wide, but it held a lot of items at that moment:

1. A single cop car.
2. A cop, standing in the median, currently occupied with handcuffing and emptying the pockets of an
3. Extraordinarily tall and skinny gentleman.
4. The gentleman’s apparent mode of transportation, which was a Target shopping cart, containing
5. Two industrial-sized mops and a
6. Mop water bucket (uncertain if it still contained dirty mop water.)

Two more cop cars came barreling up the hill toward the party, lights flashing and sirens blaring, because obviously this situation required at least six policemen, especially since those mops were INDUSTRIAL-SIZED.

My mind busied itself for the rest of the day, mapping out this scene and analyzing it in a studious forensic fashion.

Highway 280, for those of you who aren’t from around here, is our everybody-hates-it highway. It’s huge, always crowded, a continual source of irritation to the entire population, and also the victim of constant reworking to attempt to fix the eternal traffic problems. Currently, there are all these you-can’t-turn-left-but-you-can-U-turn lanes, complete with traffic lights that show the U-Turn symbol instead of a left-turn signal. They’ve barricaded other former left-hand turns and even straight-across pathways, one of which added 15 minutes onto my personal travel situation.

So you get the picture – this isn’t some backwoods country lane. It’s a SERIOUS road.

The location of the Target Cart Incident was directly in front of the Water Works reservoir. Mapping quickly in my head and then confirming the mileage with the help of Google Maps, the closest two Targets were…

1. 1.8 miles away, but up a seriously steep incline on Highway 280,
2. 4.4 miles away, on Highway 280, but crossing over the interstate, passing a huge shopping mall (and therefore much traffic), and containing a slight uphill climb, then a fairly good downhill coast. 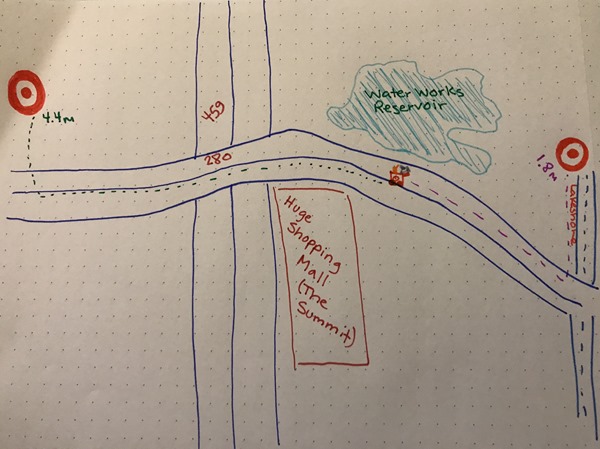 Map not to scale. Curves on 280 attempting to show elevation change. Because I’m super good at maps like that.

I decided option two was where he’d come from, as option one’s steep uphill would have been impossible while riding a Target Cart in traffic traveling at 55 miles per hour. Which means that, coming from the other direction, if he’d only made it to that steep downhill section, he’d have had the ride of his life. Who needs roller coasters when you have a Target Cart and Highway 280?

I envisioned the journey as this: Extraordinarily Tall Gentleman (ETG) riding on the back of the cart, kid-style, while holding onto the handlebars. He would push himself like a skateboard to get going, then put his feet up on the crossbar, lean over (quite a bit due to his height), and coast when he could, hopefully with minimal dirty mop water backsplash.

That covered the where and the how, but more importantly was the why.

Maybe he was the janitor at one of these Targets.

Maybe some snot-nosed kid had spilled the LAST Slushie he was going to clean up.

Maybe some suburbia Mom had sloshed the LAST Starbucks double Frappe from which he was going to destickify the floor.

Maybe in a revolt against Target’s gross misuse of the word clearance, some angry Tennis Housewife had smashed a case of 10% off “clearance” La Croix.

Maybe there’d been a puker in the home goods section. And maybe it’d splashed all over the sheets and towels.

Whatever happened, I envisioned ETG looking at that Last Mess, saying “Oh no. Uh uh. I’m done here”, and walking his Cart de Mop right out the front sliding doors, pushing it to the end of the parking lot, holding on for dear life, giving a loud Braveheart-Style war whoop, and riding his way to FREEDOM from the tyranny of the Kingdom Tarzhey.

I feel like ETG could have had a slightly better escape route planned beforehand, though. 280 drivers are known for spotting – and tweeting – oddities very quickly. Such as Naked Guy with the tripod (not an innuendo) taking selfies of himself – there were two dozen tweets about him before he could snap his first duckface. No, ETG riding a Target Cart with Two Industrial Mops and a Mop Bucket didn’t have a chance. But he did hold on longer than Naked Guy (not an innuendo), so there’s that.

(As an aside, I did in 2014 have a brief(less) Twitter conversation with Naked Guy. I did not get to the bottom of his motive.)

Later that evening, we passed back by the scene of the crime. I was hoping that the cart would still be there – as a memorial to the ET(and Brave)G. But it was gone. Which led to a whole different slew of questions. Did the cops somehow tow the cart back to the correct Target? Did Target come and retrieve their property themselves? Or was that cart and its contents booked as evidence of a Crime of Passion and Adventure?

The world will probably never know. But I feel like ETG deserves accolades for his attempt to escape the oppression of The Target Empire, not to mention for distracting my mind completely from all I had to do that day and week and month and year and life.

And so I’m here to offer it.

I salute you, ETG.

And I promise to attempt to keep my coffee in my cup and the puke in my kid while I’m in the confines of all Targets from here on out – as a memorial to you and your valiant Stand Against Messes.

5 thoughts on “Theories on a Grand Target Adventure.”