There’s been a serious dearth of opportunities for roadkill kit utilization lately. And it wasn’t for my lack of looking for those to memorialize eternally – I had been keeping my eyes especially alert for a rabbit all through March and April, as I had a set of tiny Easter Eggs that really needed a job. The only rabbit I saw took five careful drive-bys to determine that he was missing his head.

Seriously…where is his head? Is it curved under? Turned funny? Under his stomach? Okay there’s his neck nevermind.

So Easter passed without me being able to get a festive photo with which to celebrate. I tried to justify my failure.

At least I got St Patrick’s Day pictures…

I was super happy for the Animal Kingdom, as it appeared that the tide had shifted and they were beginning to win The War on Cars. So there was that. But my alt-dead Instagram account had been sitting idly by…sad, lonely, and feeling all the feels.

Finally, on the day we were leaving for the beach, I got a text from neighbor Not-Crazy-Renee. She’s always good for a tip. And this one was better than most – there was an opossum within walking distance of my house – one who died on a hill (as usual.) ‘Possums take that metaphor very literally.

I quickly grabbed some supplies, my rubber gloves, and my camera, and went on a walk. I decided that, since it was only 5 days past Easter, I could still work the holiday into my theme.

I quickly scattered the eggs, looking right and left, worried that my neighbors would see me. I didn’t want to get called out on the Next Door forum with a passive-aggressive note about “people who leave novelty items by dead animals.”

I wished I’d brought a tiny Easter basket along, but snapped my pic anyway and as casually as possible, walked back to my own house. 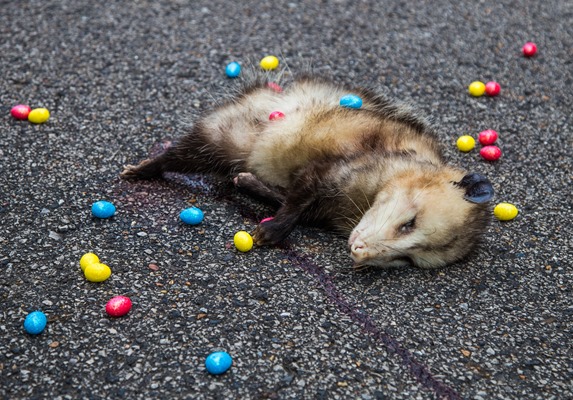 In case anyone was wondering why their baskets were sparse this year, it looks like the Alabama Easter ‘Possum got a bit…waylaid.

Just a couple hours later we left for the beach, and I about flipped with paranoia when we passed by and all the eggs were gone, but the possum was still there.

WHAT HAD HAPPENED TO THE EGGS.

Do I have that tidy of neighbors that went out and carefully collected the tiny Styrofoam eggs because they prefer their neighborhood roadkill to be free of extraneous objects?

Just before I had a mini panic attack, I noticed bright colors in the gutter. The eggs had been blown and scattered by passing cars.

There were no acceptable animals on our way to the beach, but just as we were almost home, I spotted what I’d been awaiting for so long: A fresh, uncrunched armadillo.

Although he was kindly on the side of the road and there was plenty of margin to work with, he was beside a busy road. And I really do prefer to work in solitude.

I nervously got out of the car and pretended to be taking pictures of the extremely unremarkable bushes behind him until there was a break in traffic. I decided to attempt a literary prop first. 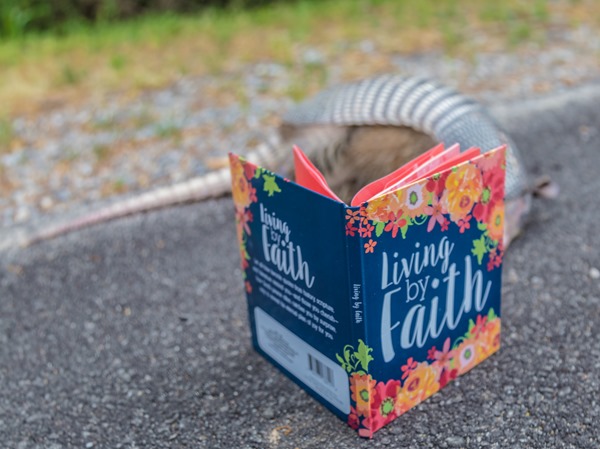 Livin’ on a prayer.

But the wind was high and quickly knocked the book over. And it just didn’t quite portray the aura that this particular Armadillo was giving off. He seemed to be more of an outlaw than a man of the cloth.

So I grabbed my second prop, waited again for traffic to stall out, then set up my next pose with great speed. I’m a freakin’ Olan Mills when it comes to scene changes. 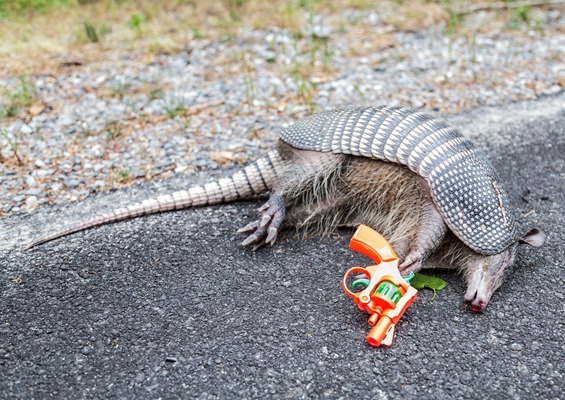 Desperado the Armadillo has been out riding fences for so long now….he’s a hard one…
…but he’s got his reasons.

Yes. This was what he was meant to be. I left the gun with him (for protection from roadkill snatchers, obvs) and sprinted back to the car, hoping to jump in and have Chris gun the engine before I was spotted.

And, as it turns out, my paranoia was totally on point, because I had this conversation with another neighbor, let’s call him Freddy-The-Neighbor (because his name is Freddy) later that week…. 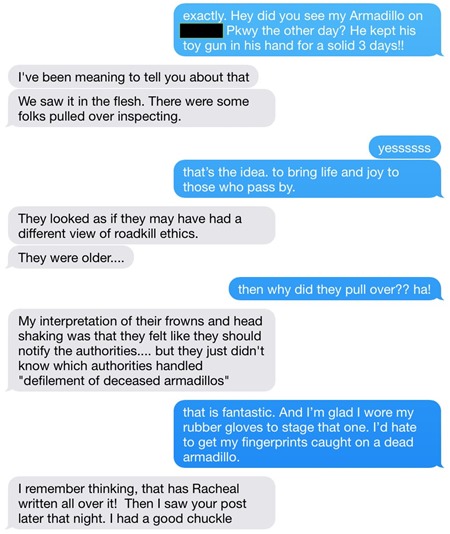 I seriously better lawyer up. Because apparently, I’m the Desperado here.

1 thought on “The Robin Hood of Animal Memorialization.”