I live for spelling bees.

I only participated in one when I was a kid, but I remember relishing the thrill of competition. I’m also a fairly good speller (except for the word dilemma) and would greatly appreciate it if my children would join me in that vital pursuit.

Last year was Ali’s first round of spelling bees. We have a school spelling bee (just our homeschool cover school), and then the Birmingham District Homeschooling spelling bee. In Ali’s first ever spelling bee as a third grader (spelling bees are for 1-8th grade – so clearly I forgot what I lived for two years in a row), she placed 1st in her grade and 4th in the school and was elated at her achievement, even though she was one spot away from a cash prize. She decided she wanted to work even harder for the district bee, truly hoping to grab a cash prize. But alas, the district spelling bee’s Round One started in words past where we’d studied, and so she was out on round one, along with over half the kids that participated.

As soon as the spelling sheets came out for this school year, we began studying. We made it through all 450 words a few times through before the first bee, challenging my pronunciation abilities and forcing me to use the audio feature of dictionary.com to learn words such as a posteriori, recherche, netsuke (pronounced netskee), and more. And then there were the long words that were a delight to say, such as prestidigitation and supererogation. We loosely knew them all, but alas – Ali was self-admittedly too confident as a mature 4th grader, and spelled out of the school spelling bee at 5th place.

We trudged through the holidays, spelling and re-spelling reveille and sanctum sanctorum, in preparation for the district bee. I wasn’t super confident in her readiness for the harder spelling bee, but I encouraged her to go slow, picture the word in her head, and GO SLOW. The district bee was important, after all. The winners of that bee progressed toward Nationals.

The top three winners of the district bee get to go to the “Homeschool County” bee – there are 67 counties in Alabama, but homeschoolers don’t get to compete in their county bee – they all get thrown into the same pot called Homeschool County, then winners of the 67 real counties and the one imaginary Homeschool County compete against each other in the State Bee. I enjoy imagining what Homeschool County is like, and often find myself daydreaming about it…the stores lining the streets would include Denim Jumpers R Us and Minivan Superstore, the “playgrounds” would just be circular seating arrangements of children reciting the U.S. constitution in Latin, and all food inside county boundaries would be required to be gluten free and devoid of any devilish red dye.

My heart began beating heavily as soon as we entered the room for the district bee. My hands were shaking. I decided I needed to busy them so as to not take on more nervousness on behalf of my daughter. So I took her picture. 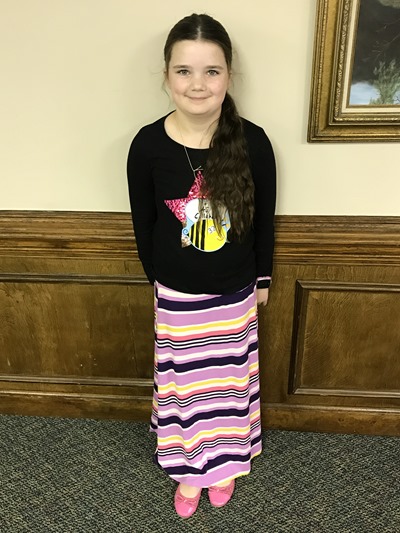 She unwittingly chose the only long skirt she had – it was SO Homeschool County of her. The sequins on her shirt, however, would definitely get her thrown into Homeschool County Jail. Where she could keep me company during my incarceration for having purple hair.

According to the seating arrangement, Ali was the third to last speller, and since I couldn’t take pictures of her to busy myself, I decided I’d write down every word used, match them against our study sheets, and see if all the words did indeed come from the 450 we tried our best to memorize. There had also been extra sheets of challenge words – some we’d briefly gone over – but 450 words is really an undertaking. Who has time to look at a dozen more sheets?

I began writing with each student, and then texting updates to Chris and a couple other friends waiting with bated breath (or wishing I’d quit texting them.) I created a system – dots on the left meant the student got the word wrong and was therefore out. I put Ali’s word in a square, and dots on the right meant the word had a homonym and therefore had its definition read with the word (during the last spelling bee, we the spectators had played “Who can figure out what the homonym is?” – a game that is harder than you might imagine.) 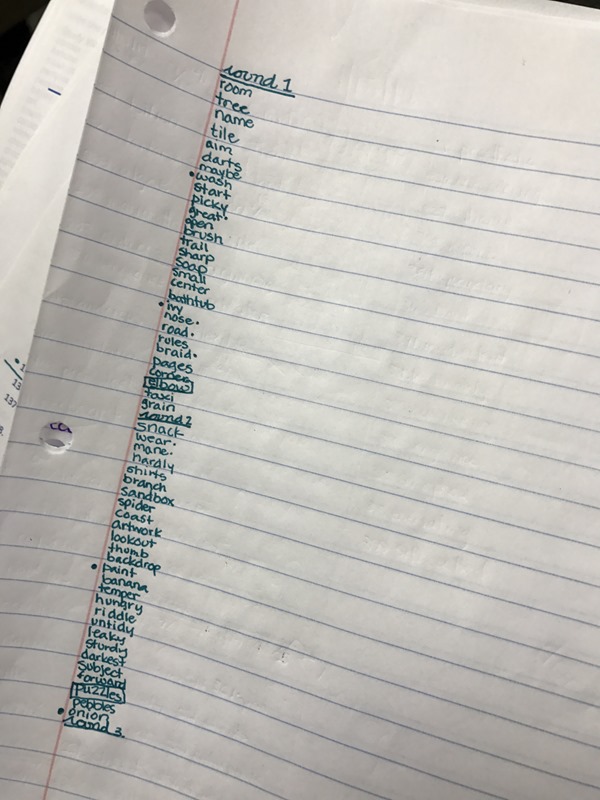 Thankfully, the moderator started with much easier words this year. As soon as the first word was read, Ali looked back at me and smiled. There would be no Round One elimination for her this year.

The rounds kept going and Ali continued to spell correctly.

Round 7 was the frightening round – the one where the moderators took a minute to discuss amongst themselves, then shuffle papers – I knew they were going off-script. We had finished with the word list and were headed into uncharted territories.

With each new unstudied word, I just knew Ali would be out.

But then she spelled tortilla and popularity. My heart burst with spelling pride. 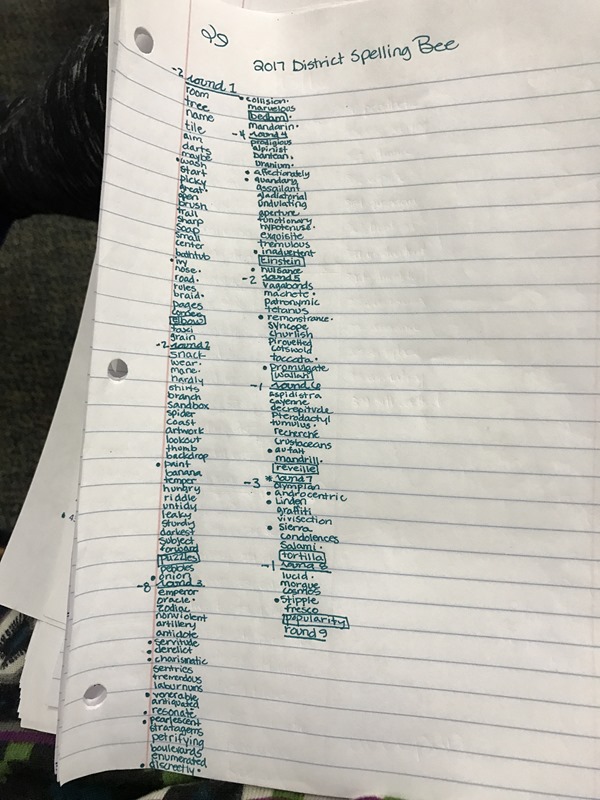 There were only five students left by round 9, and Ali was giving then word “Hogan”, except that it was pronounced “hog-on”, and I didn’t even know how to spell it. Surely this would be the end. Ali paused, having no idea what a Hogan was (nor did I), and wisely asked for a definition.

“a Navajo Indian dwelling constructed of earth and branches and covered with mud or sod. It can also be pronounced ‘hogan.’”

Oh, this was the breakthrough Ali needed. Would she opt for guessing “hogan” or “hogon”?

She went with Hogan. And was right.

She made it through round 10, miraculously spelling acronym.

The field was now down to 4 – it started at 29 spellers. This was crazy. She was on a roll.

Then she was given the word Desperado.

She’d never heard it before, and after a moment of thinking, she spelled it desperoto.

She was out, officially 4th place, just two rounds before the bee was over. 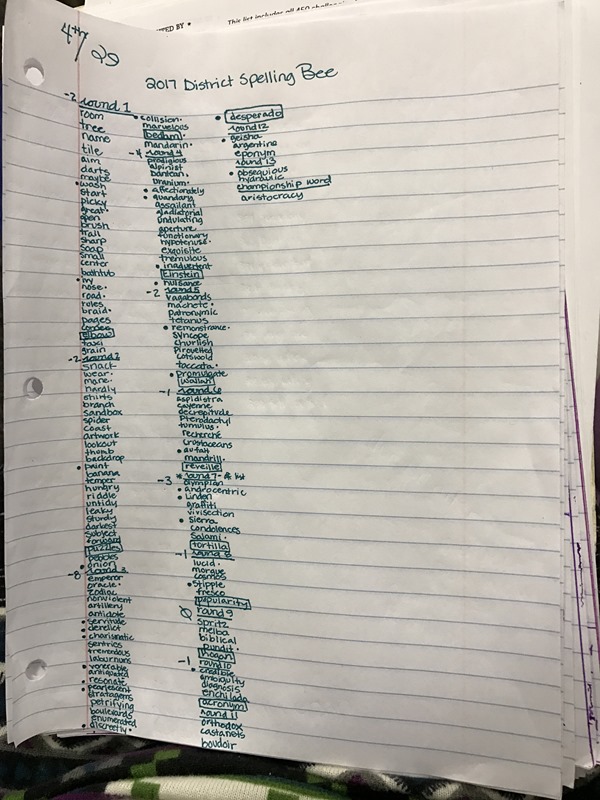 She and I were both shocked and excited that she’d made it so far, and not at all disappointed that we didn’t get to visit the magical land of Homeschool County as the 1st, 2nd, and 3rd place finishers did. We quickly decided that 4th place was “The first place of No More Studying”, and celebrated by car-dancing to Spotify on the way home – something that’s surely not allowed in Homeschool County. 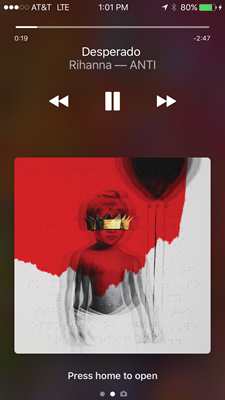 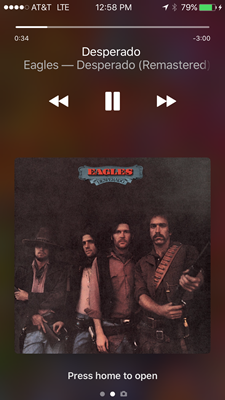 And, for what it’s worth, when it comes to Desperado, Ali and I unanimously concur that Rihanna does it best.