The cliché “You Snooze, You Lose” has never been truer than it is with regards to roadkill.

I sadly lost both a raccoon (would’ve been my first!!) and a beautiful armadillo last week because I put off for tomorrow what I could have done today.

1. Both creatures were very close to the road on main thoroughfares and I don’t want to die while shooting dead things, and

2. I didn’t have a clear idea of how to stage the precious creatures. Their memories must be properly preserved, after all. No hurried, personality-less photos here.

It made me start to wonder if I could make a deal with Streets and Sanitation to drop off all fully-in tact critters on my road for 24 hours…would a $20 bribe be enough?

My neighbors already love me so much…

The cliché “An Ounce of Preparation is Better than a Pound of Prevention” has never been truer than it is with regards to roadkill.

So I decided that it was high time I had a roadkill kit in the back of my car. Ready for swerving stops on highways and biways. Ready for many scenarios, poses, and carcasses.

So I swung into my children’s Favorite Place in The Whole World, The Dollar Tree.

(It’s the children’s favorite because they didn’t know it existed until Noah’s Godparents took them there and they were astounded at an entire store of items for the same price. Every time they stay with them they make a glorious visit and gleefully come home with random trinkets such as front desk bells, fly swatters, and very roughly hewn washcloths.)

The kids were thrilled with this deviation from my normal shopping habits and couldn’t wait to see what exactly had prompted this delightful outing.

“What are you getting Mommy? Huh Huh Huh?”

I walked down the aisles, grabbing various and random items such as leprechaun hats, toy soldiers, and energy drinks.

“WHAT are you doing with all this?”

“You have to figure it out…”

“What do baby pacifiers and Easter eggs have to do with each other?”

“Think about it…you can get there.”

“Are these sharks and balloons for someone’s birthday?”

They proposed all sorts of wrong ideas. Each one I shot down and encouraged them to continue using their powers of deductive reasoning. It was a school day, after all. And kids these days don’t do nearly enough thinking.

Finally, as we were checking out and surrounded by other human beings, Ali said, “I think I figured it out. Is this all for your roadkill note cards?”

I happily took my purchases, added them to a box with a few pairs of rubber gloves and a pair of Squirrel Underpants I was gifted by a blog reader, and am now driving around ready for whatever comes my way. Or rather, whatever doesn’t come my way. 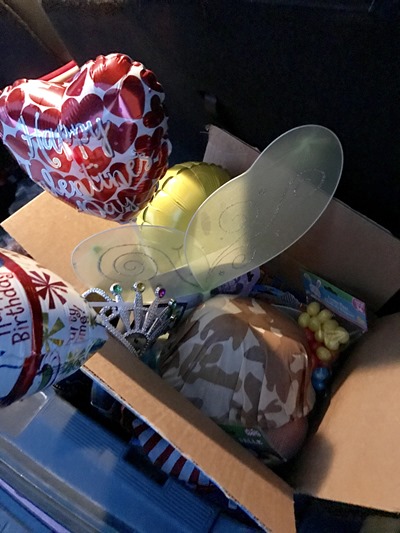 Because the cliché “Life Comes At You Fast. {And So Does Death}” has never been truer than it is with regards to roadkill.

It was days after creating my One of a Kind Kit that I finally had a chance to use it. It’s not that I hadn’t seen any roadkill – I’d seen plenty, but I’m very particular. I’m a Roadkill Diva, if I’m being honest. To be classified as @happyroadkill, you must be still mostly in tact and recognizable. No intestines can be visible. The more lifelike, the better. And, if you ask my kids “Where does your mom draw the line?”, they’ll be quick to tell you. “She draws the line at former pets. Because that’s sad.”

We were in two cars and driving from the park to dinner. I spotted a new friend and quickly did a U-Turn to pull over. Chris drove past me, puzzled and confused. I was sad that he wasn’t observant enough to know what was happening. 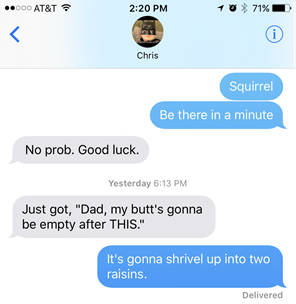 (Those last two texts were later in the evening when Noah was taking his very melodramatic once-a-week poop. It has nothing at all to do with this story except that one cannot possibly crop out such goodness.)

There was indeed a squirrel. I parked and began rummaging around in my box, as the kids excitedly inquired as to my plans.

“What are you going to use, mom? Huh? Huh? Huh? The balloons? The soldier?”

‘Yeah…not time for that. He looks like he was going out for a long pass. Let’s go with the football.” 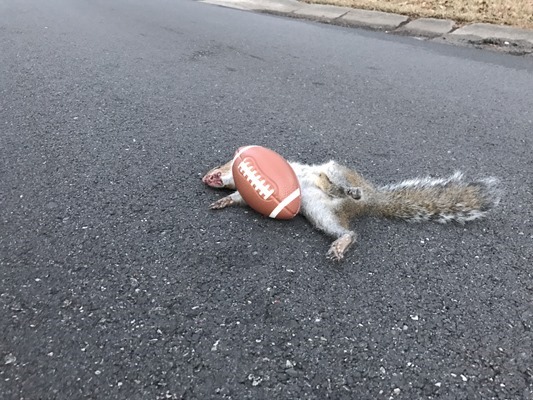 “Verne, I think we’re going to need to see the instant replay to know if that was a catch or not.”

Poor guy. Definitely looked like a victim of targeting.

A car was coming up behind me so I hurriedly jumped in the driver’s seat and carefully scooted around Julio the Squirrel. I watched in my rearview mirror as the car slowed and observed my art installation. Meanwhile, the kids were horrified.

“WHY did you LEAVE the football??”

“Because it was touching a dead squirrel…”

“BUT THAT WAS A FOOTBALL!! YOU COULD USE IT AGAIN!!”

“That’s why we went to the dollar store. So that we could create our art and leave it for others. And also so that we could not carry around dead-thing-touched-props. It’s okay. We have plenty more.”

“When you run out of things in your box, will we go back to the Dollar Tree?”

“I imagine we will.”

“YAAAAAAY! Thanks for leaving the football, Mom!!”

Because the cliché “Waste not, want not” has never more false than it is with regards to roadkill.

9 thoughts on “On Creating a Roadkill Kit.”