This afternoon, I thought I had a hair appointment. But I apparently did not – it wasn’t until the next Friday.

And so, I found myself with no kids and an entire afternoon to fill.

On the way to my nonexistent appointment, I had rolled by our city’s main water supply, Lake Purdy, and had made a mental note to stop by for a photo op on the way home – if I had time. But now that I had more time than any mother ever has to herself, I relished the idea of giving the mostly-dry lake a thorough tour.

I drove back to the parking spot by the bridge, grabbed my camera and my tripod, and set off through the woods, down into the lake bed.

Now, I don’t often think seriously about the fact that we are in a severe drought. My greatest beef with it is the souring of my favorite season, fall. Instead of all the beautiful colors I am entitled to, many of the leaves have just died or fallen.

But when I reached the edge of what used to be Lake Purdy, I had an “oh crap” moment.

This was our water supply. 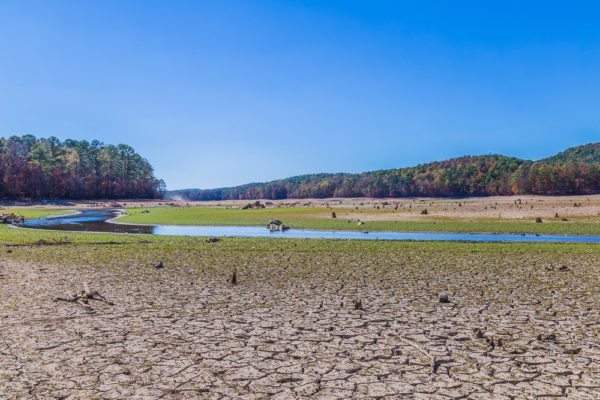 It looked like an entirely different planet – dust and moon rocks and weirdly shaped piles of mud. 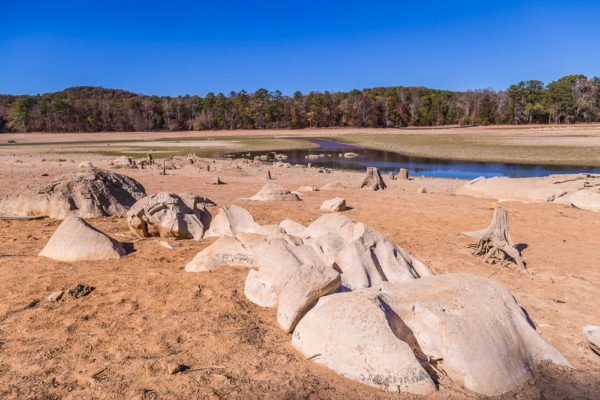 The rocks all had a fascinating squiggly design in them, somehow formed by being underwater for most of their lives. 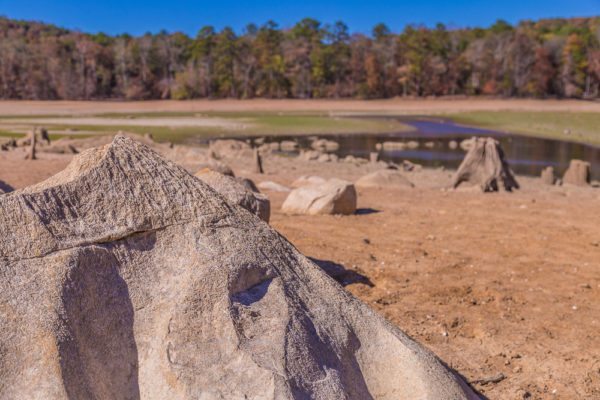 Every step had to be carefully watched to not fall in a giant crack or get too close to the tiny bit of remaining water – the mud went from dry and hard to slurpy with very little warning. 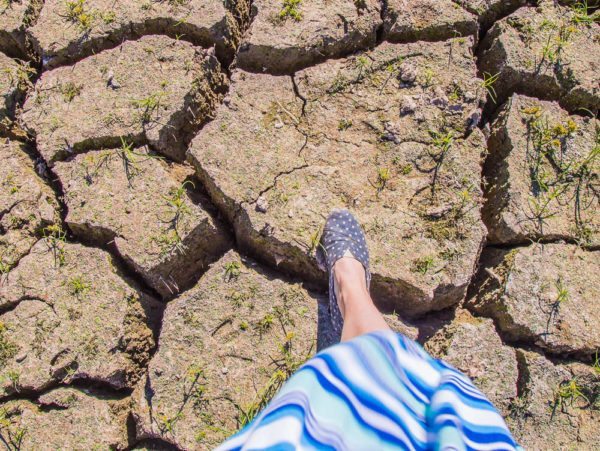 Animal prints were all over the place – hooves and claws and bird’s feet. 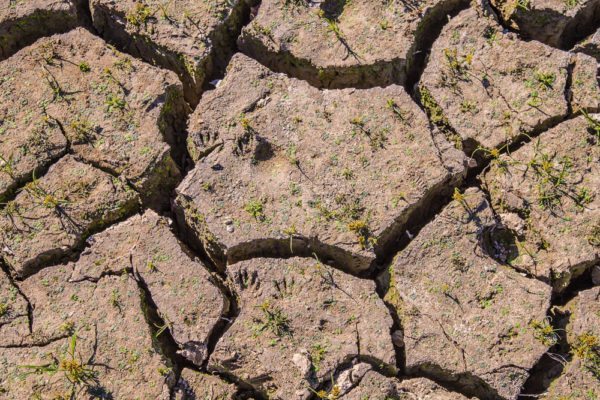 It was both a wonder and a sadness to behold. 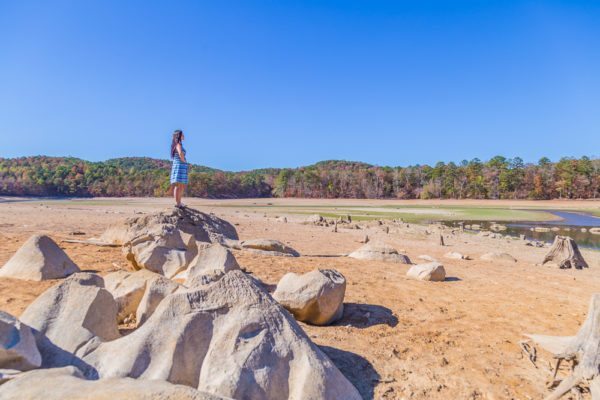 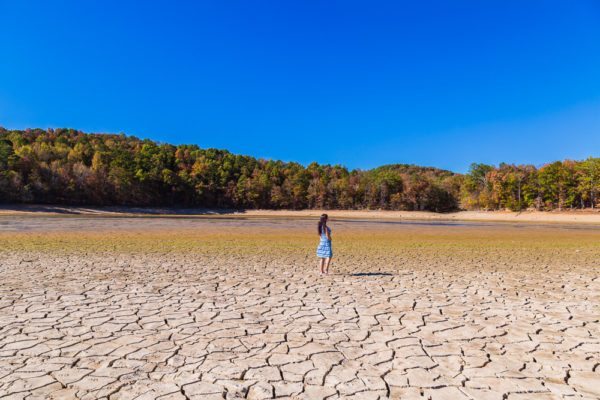 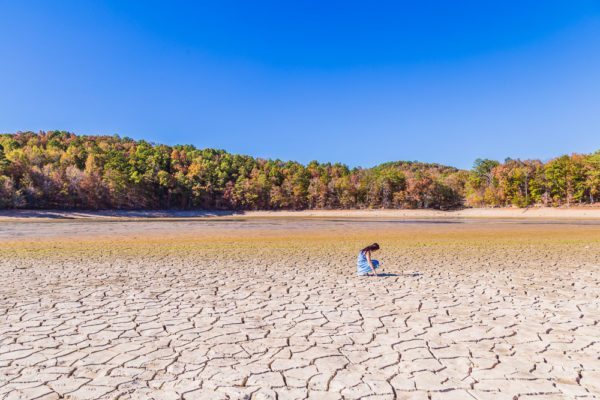 I began my slow trek to find what was left of the lake. I knew that a portion of the lake still existed – but I didn’t know how long of a walk it would take to find it.

Along the way, there were many different terrains and interesting finds. 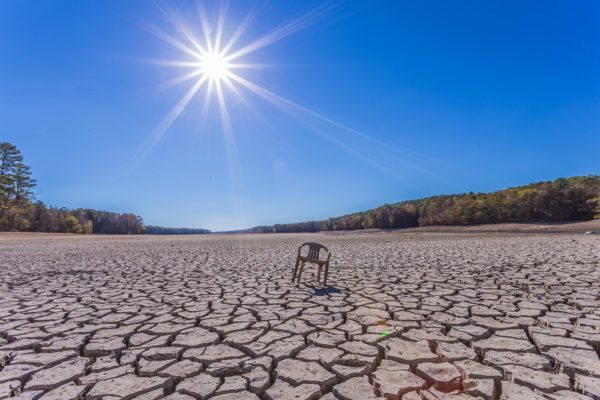 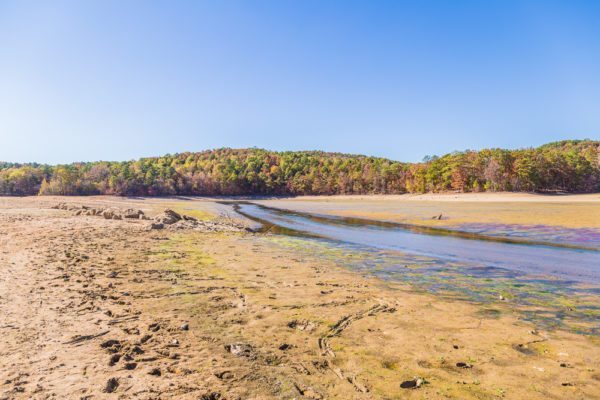 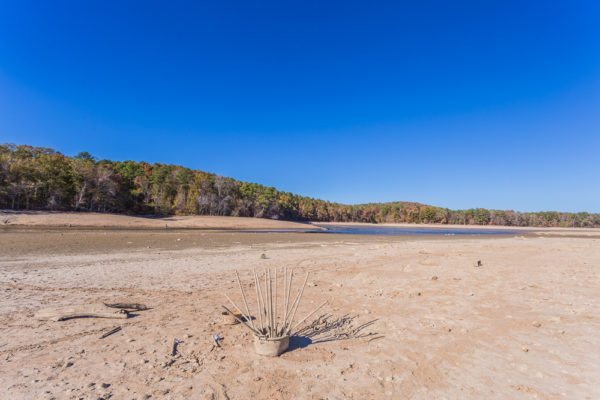 About 3/4 of a mile into my lakebed walk, piles of shells started showing up. 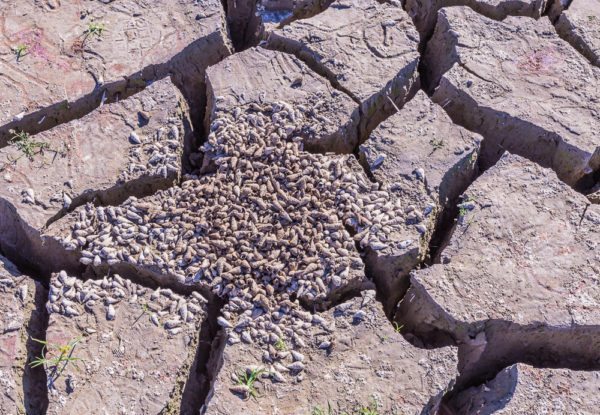 They, along with the flies buzzing around them, added another complication to the act of walking. 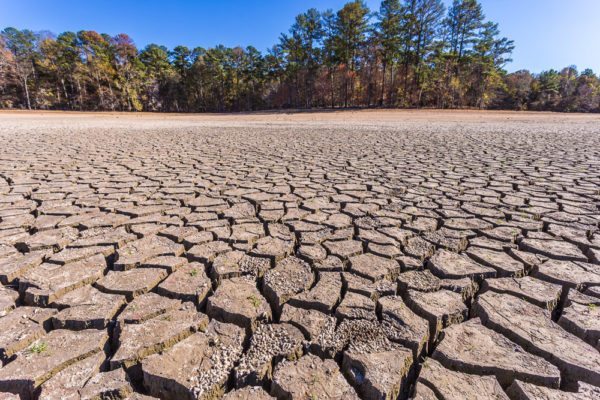 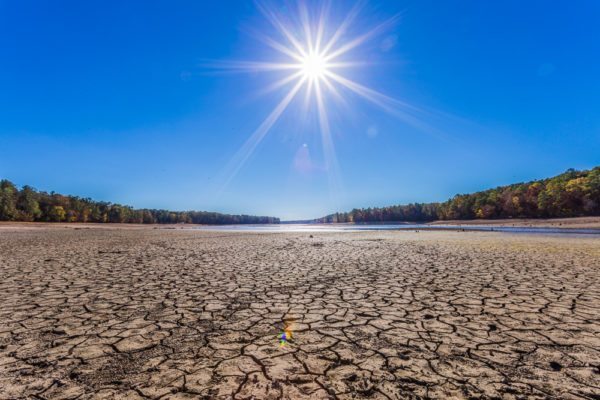 As I grew closer to it, the treasures abounded – clearly many similar things had already been picked up by other visitors in the parts of the lake that had been drier for a longer period of time 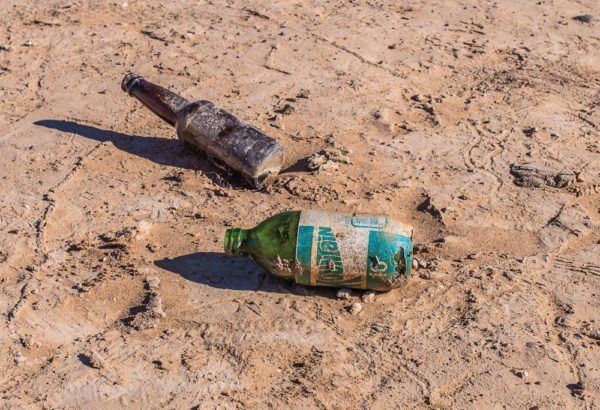 These bottles had been lurking under Lake Purdy since I was a kid. Which really made the whole drought thing seem more serious. 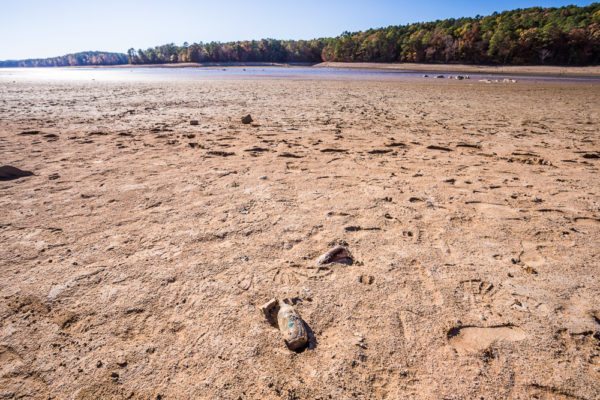 I turned around and headed back to my car, following the lake to the stream to the vast amounts of dry land. 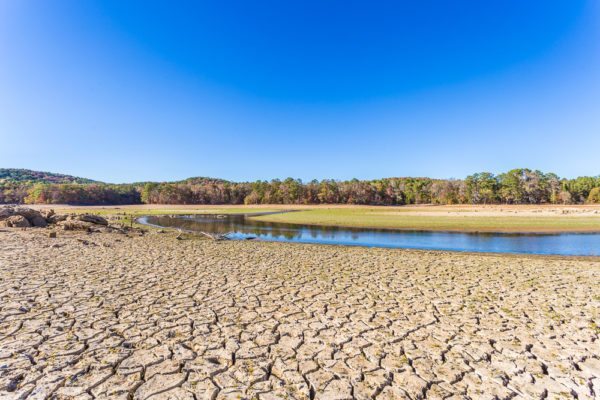 The merciless sun and wind made it fairly easy to imagine that I was in a desert far, far away. 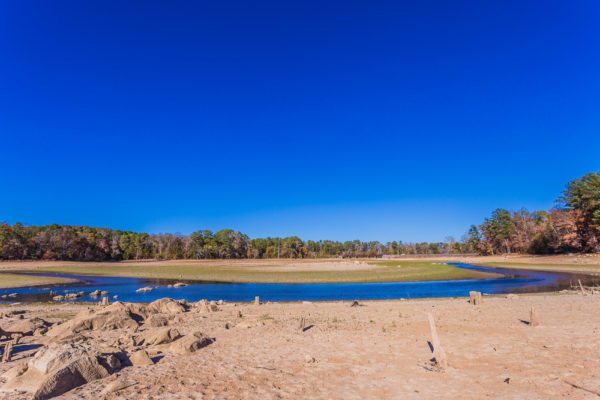 I passed my first other human when I was almost back. He’d parked on the other side of the stream, and we yelled back and forth about our finds. I told him that he could get to the lake from my side, and before I could stop him, he started toward the stream to come across. About four feet out, he instantaneously sank into the slimy, putrid mud – all the way up to his thighs. 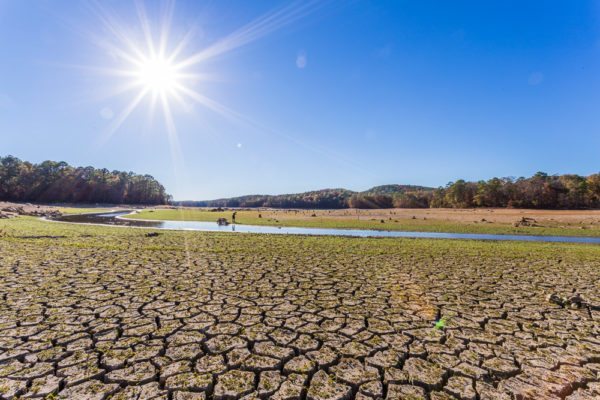 I screamed at him to be careful – clearly too late to actually be helpful.

He hefted his legs out of the mud by pulling upward with his hands. There was no way to get to the stream to clean up without it happening again, so he walked on, frustrated, now with his legs covered in a tarry mud.

I headed toward the bridge and went under, where an older gentleman was fishing. I don’t know if he was catching anything, but one would think that the fish to water ratio was pretty favorable. 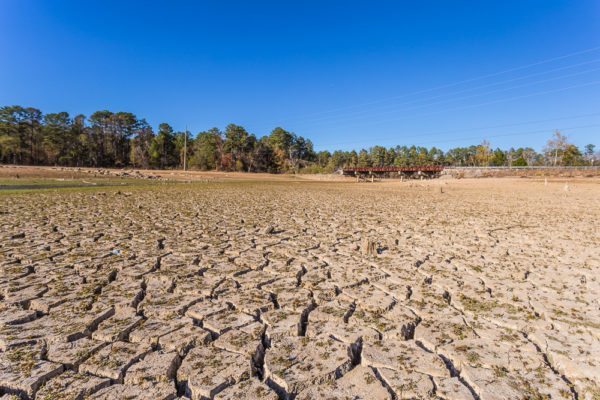 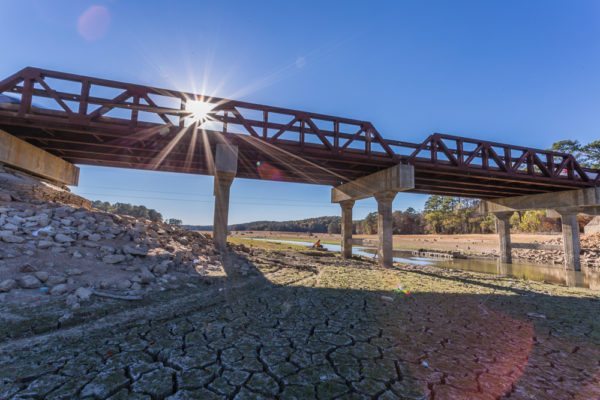 I took one last look around at the vast otherworldliness of the place, then headed out. 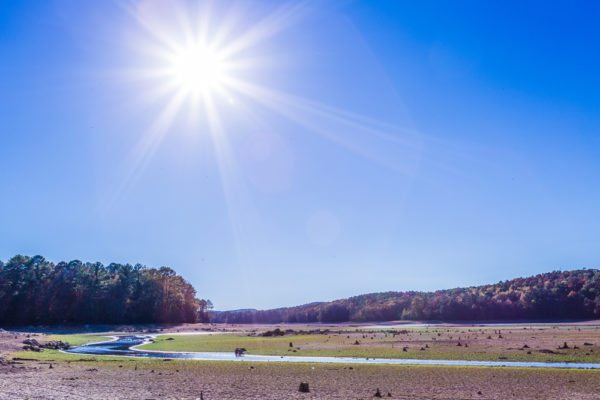 I’m still fairly angry at the drought for taking away my vibrant fall colors, but now I can see that perhaps that’s the least of our problems.

For information and permission to use these photos in the media or for any other use, please email me at rachel@picturebirmingham.com.