This is the first year we haven’t participated in our Church’s Trunk or Treat, pouring oodles of hours into creating a family theme (or, in the case of last year, throwing it together at the absolute last minute three days after what would be a half-a-year-changing wreck.)

It’s not that we quit – our church decided to not do Trunk or Treat this year. We are on a break.

So, we had to figure out what it is people do these days, in the 2016s, for Trick or Treating. Is this still a thing? Can you still knock on stranger’s doors and expect to receive candy? Do you go somewhere else or do it in your own neighborhood?

We asked our neighbors, and they suggested a parade / neighborhood somewhat nearby. Their Daddy was out of town and our Daddy couldn’t leave work in time for the 4pm parade, so we decided to band together to explore this new and unknown territory.

I checked Ali out of Gymnastics early so that we could rush across town, park down the street, run up the street, both my children wearing full-length black costumes on the record hottest Halloween in the state of Alabama (pretty sure it hit 120 degrees…or at least 90.)

There were droves of people at every intersection, pouring into the town center to see what must be a magnificent parade. Right?

The sweating kids were excited. This was what life was all about. Collecting gobs of candy from parade floats, then trying out this mystical antiquated thing called Trick or Treating.

I found an empty space next to the fence and set out to hold our spot.

Except that the kids were whiny.

And wanted to play on the playground.

So I held their light sabers in a spot-saving manner while they abandoned me to go frolic.

The families next to us tried to squeeze out our space. One of their kids was dressed as a policeman and had a whistle that he was determined to break the world record for how many times in a row he could blow it, or at least discover how many blows it would take for my ears to bleed out. I heard a rumor that no candy would be thrown at the parade this year – and that these barriers were new so how would the kids be able to get the candy?

I pondered what I was doing with my life and questioned my sanity for taking this on.

Our neighbors joined us, which added another adult in the effort of saving our fence spot while the now-four children re-abandoned us.

Finally it was parade time. We called our whining sweaty children back from the playground. Noah put on a good pout-and-stomp show – the kind that makes a mother want to scream for mercy and also WHY AM I DOING ALL OF THIS FOR YOU?!

But we got them lined up at the fence and the parade started. After the first two floats, we had scored a life saver, half-crunched.

I groaned inwardly, suffering from the repeated whistling of the boy next to us as he destroyed my ears and my soul.

The floats kept coming, mostly just staring at us and every now and then gracing us with a thrown item. But the items they did throw didn’t make it past the fence, taunting us as if we were penned-up zoo animals.

Finally, I decided it was time to go rogue. I let Ali climb under the fence to grab items that were in the road between floats. She was able to get a few things, including a pretty awesome stuffed snake, some Mardi Gras(?) beads and a Moon Pie, and a few pieces of candy that she divided between the other three kids, all too young to break the law like her.

After this supposedly famed parade, this was the contents of Noah’s bag. 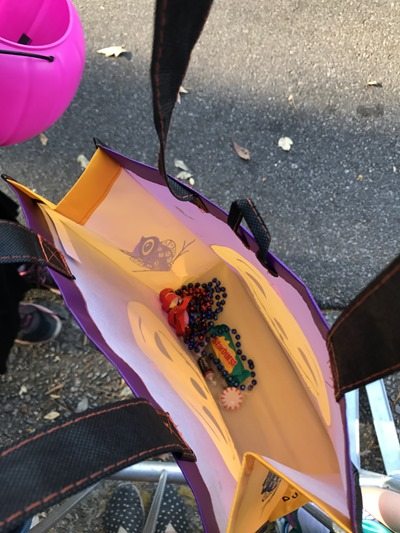 As soon as the last float went through, people immediately disappeared. We found ourselves alone at the fence, the whole village abandoned, and we were very confused.

We thought we were supposed to go Trick or Treating immediately after this, but we looked down the street to the left and no one was doing so.

We had the presence of mind to, before marching our children into the unknown, grab a few pictures. 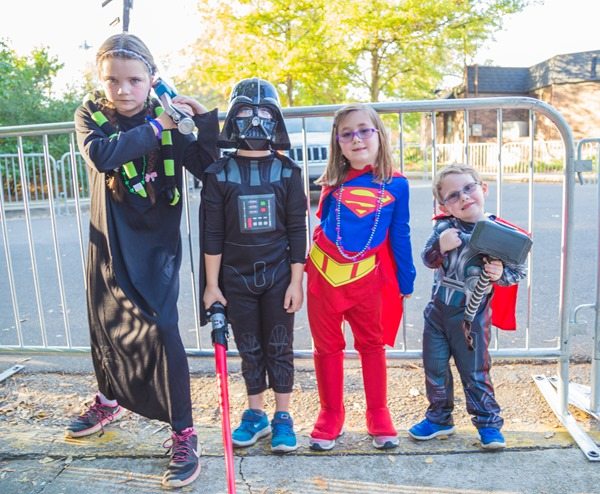 Their poses and expressions eased our stress and lowered our blood pressure, breathing a tiny bit of new life into our perilous motherhood situation. 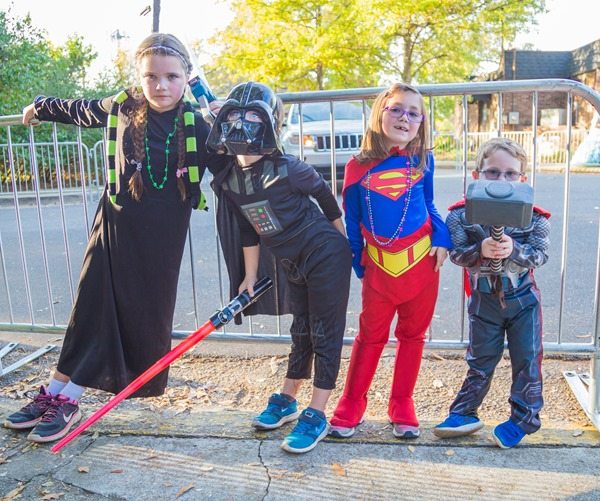 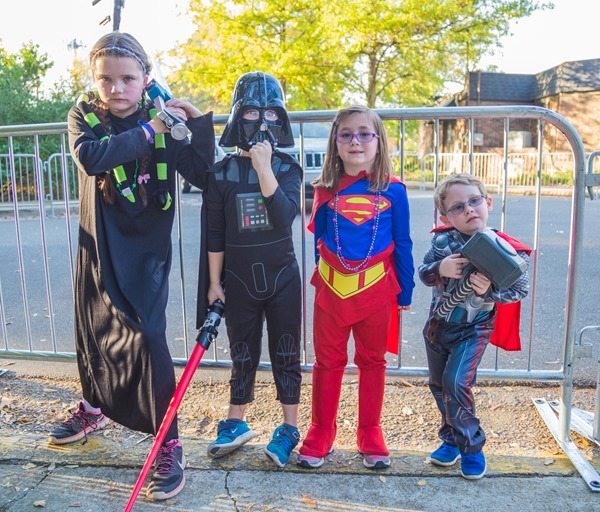 We walked left, weaving through the empty neighborhood, avoiding cars careening around the corners, growing in confusion.

What had we done wrong?

Where did the village disappear to?

WHERE were the Trick or Treaters?

After half a mile of sweaty dangerous walking, we picked a random dark house, shrugged our shoulders, and told our kids to go knock on the door.

Considering they’d never done this in their lives, we were surprised they agreed. The love for candy overcomes all fears. 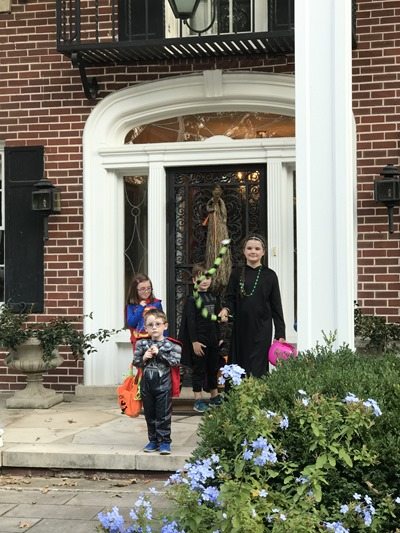 The house was silent, aside from a yipping dog.

The kids all of a sudden jumped with excitement. They yelled back at us, “She said she’s putting the dog up then coming back!!”

After a few more minutes, she returned, with candy carefully laid out on a silver platter. 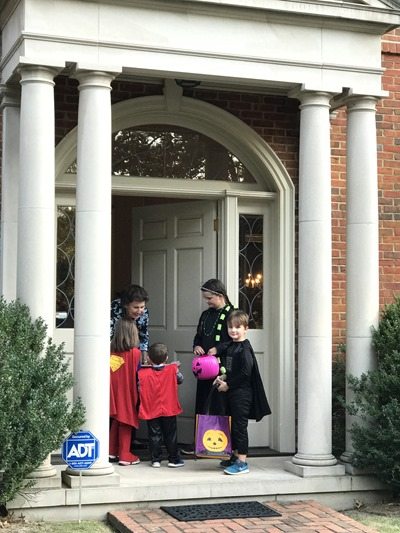 They ran back to us, high as a kite over their newfound ability to extract candy from a stranger.

But yet, the rest of the neighborhood was still a ghost town – and not in the fun Halloween way.

I texted complaints to Chris and a friend. They both responded with a street name we should try. Of course it was on the other side of the village – another half a mile away, but it sounded right, and they sounded confident.

So we began walking again. Slowly, as our Darth, Random Jedi, Superwoman, and Thor had by now lost 50% of their personal hydration from the heat.

We stopped at CVS for a bathroom break. As I and my kids were waiting (and had bought a water bottle to ensure their life would continue and so we wouldn’t get kicked out of the drug store), a tall man in a business suit looked over at us, scowled, and said loudly to the lady in line next to him,

“THEY sure are sugared up already.”

She looked over her shoulder, scowled, and said loudly,

“You’re right. But what are they doing in here?”

I was so confused by the apparent fact that they didn’t think I could hear or understand them, and also because my kids were wilting, not jumping around. I looked at them and said, “They’re in here because our friends needed a bathroom break.”

The man turned cooly and ignored us. The lady met my gaze and wrinkled her face up into an even bigger scowl. I was ready to knock her ridiculous seven inch wedges out from under her feet, but I held it together. For the children. For the holiday. For my unblemished criminal record.

Finally, we made it to the street that had been suggested.

And our mouths hung open.

Thousands of people filled the streets. Cars could not possibly get through. Every house had a table or a giant theme set up in their front yard. Kids were lined up getting candy from each one. 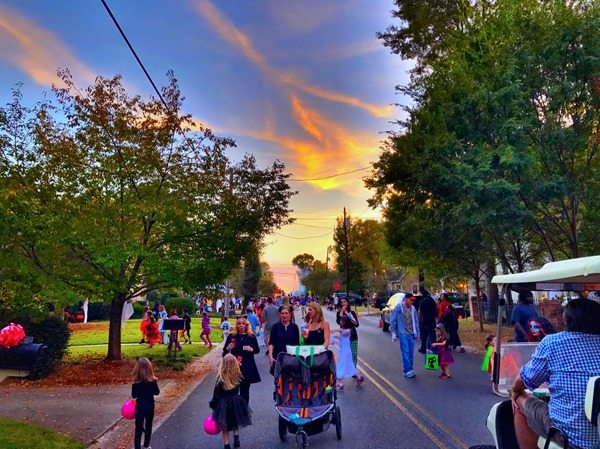 Nothing could be more opposite than the empty street we’d started on.

Two giant floats from the parade slowly drove up, and then backed back down the street, blasting Michael Jackson. 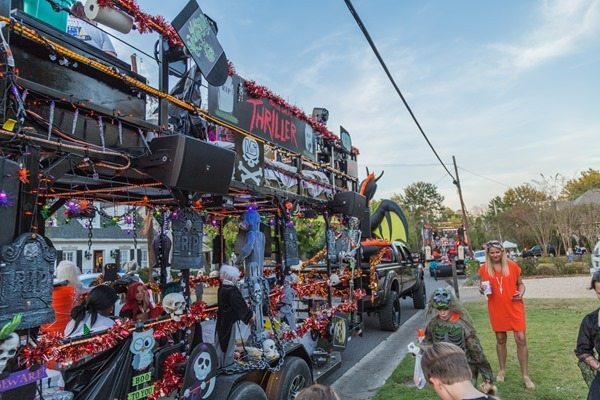 (And actually housing the ghost of Michael.) 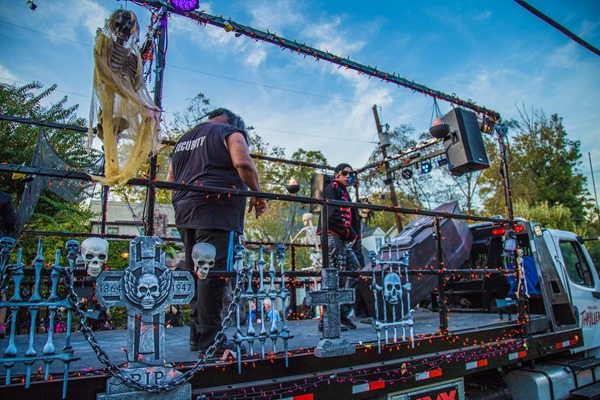 Right as we found this Halloween Utopia, Chris also found us, adding a much needed third adult to our situation. 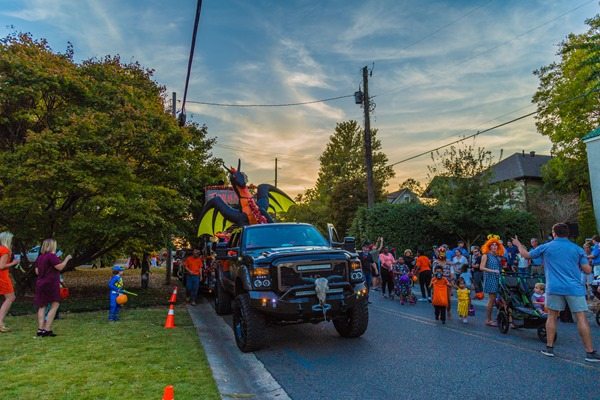 The kids began running from house to house, filling their quickly burgeoning buckets with the miracle of the season, thanking us profusely for bringing them here. 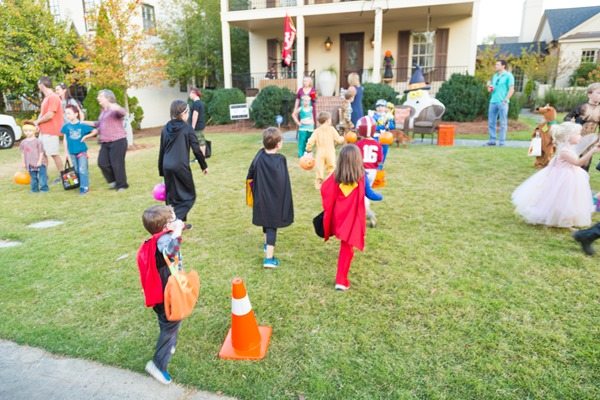 After a total of three and a half miles of walking and full bags and buckets for everyone, we slowly walked back to our cars in the dark, the children filled with the glow from their new knowledge that Trick or Treating is actually a real thing – because I’m pretty sure they assumed it was just a nice fairytale before last night.

3 thoughts on “The Discovery of Trick or Treating.”