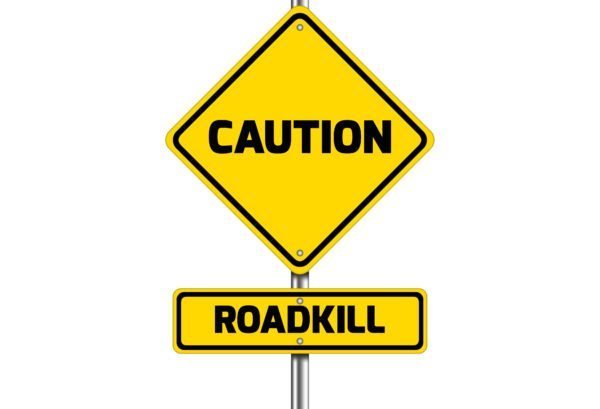 Although I haven’t mentioned it here recently, mine and my dear friend Tanya’s foray into Fun With Roadkill has not stopped.

To recap quickly, there was Sloppy the Squirrel, who held a brief life as a marketing squirrel, and then I gifted him to Tanya in coffee mug form as a celebration of Christ’s birth. 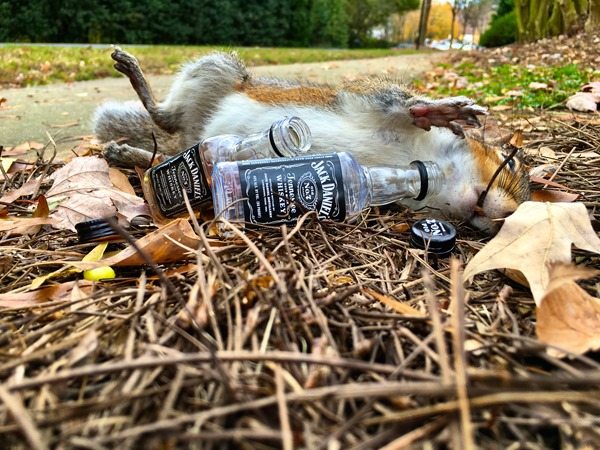 And then there was Sunset the Armadillo, which I never shared here, but when I came upon him, he was enjoying a gorgeous pastoral cliffside view for one of his last sunsets. Or perhaps it was a few past his last sunset, gathering from the hollowness of his heart….and abdomen. He also made it into mug form, this time for Tanya’s birthday. 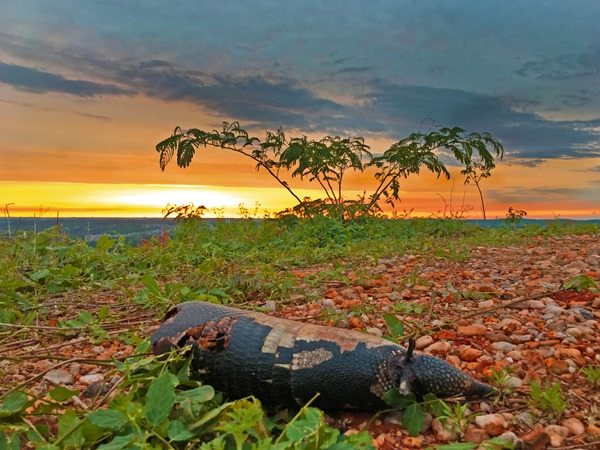 Happy Birthday here’s a shell of an armadillo!

Tanya claimed to have cried when she opened her birthday gift. I’ll let you determine whether they were tears of joy or horror.

This past weekend, Tanya took on an unimaginable feat – the Cascade Crest 100 Mile Endurance Run – a total 22,250’ elevation gain and run all at once – no sleeping involved. (This is her second 100 mile run – you can read about the first insane run here.)

As I was driving home from my own paltry 6 mile run Saturday morning, I saw him. A perfectly dead possum*, in my neighborhood, just begging to be photographed to live on forever in our hearts.

The fact that it happened on Tanya’s ridiculously huge race day did not escape me. Clearly this possum was providence – gifted for such a time as this – specifically for her encouragement.

I began frantically spinning the rolodex in my head of Roadkill Staging Ideas. I needed something good, something quick, and something meaningful.

I knew I had a time limitation. I had a homeschool meeting in an hour, and Tanya’s race was starting in two hours. I had to drive home, take a quick shower, get ready for my meeting, gather supplies, and then get back to the Possum – preferably, before he got hit by (another) car.

(And also, it’s best to not show up to a homeschool meeting with roadkill blood under your fingernails. So there’s that.)

But it was a busy road. And a steep one. How would I possibly be able to properly stage and photograph roadkill without myself becoming roadkill?

Prayer. It would take prayer. And also determination. If Tanya could run 100 miles in the Pacific Northwest mountains, then surely I could do this. For her edification.

I parked my car in the middle of the road, right in front of the creature to be henceforth known as Crunchy the Possum, put on my Hazard lights, and before I got out, took a deep breath and prayed a little prayer.

“Please Dear Jesus just for a minute don’t let anyone come up or down this road.”

I hopped out of my car, sprinted to Crunchy, staged him, took three quick pictures, then saw two cars coming down the hill in the other lane. I grabbed the supplies and ran back to my car, hopping in as the first car passed by.

The second car passed slower, and nearly stopped when he got beside my car. He glared at me as he slowly passed by, as if Crunchy had been his very own pet Possum.

(Whatever his underlying issue was, he in his leather-seated luxury SUV clearly didn’t appreciate the art of Roadkill Photography.)

I started my car and jetted around the corner to a safe place to park for a minute to take a look at my photos.

They weren’t perfect. They were hurriedly taken, and I kicked myself for not getting a slightly better angle. But regardless. I knew deep down in my heart that it was just what my friend needed on race day. 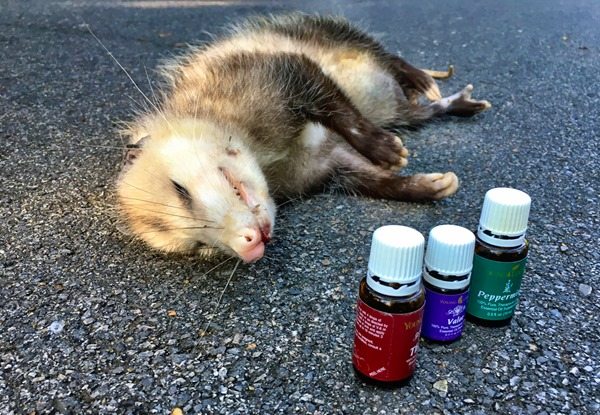 And so I sent Crunchy her way, with very little time to lose before she would be embroiled in a race for her life. 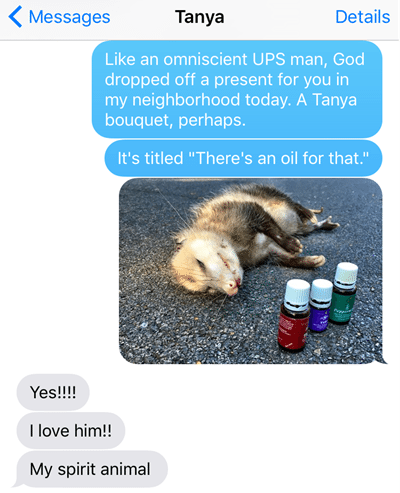 And did it work? 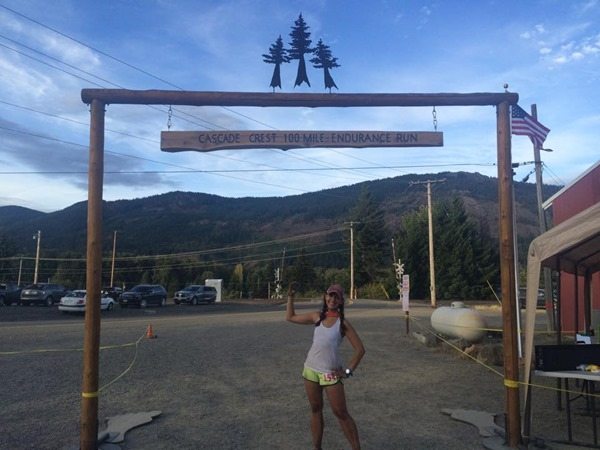 The woman is a beast. 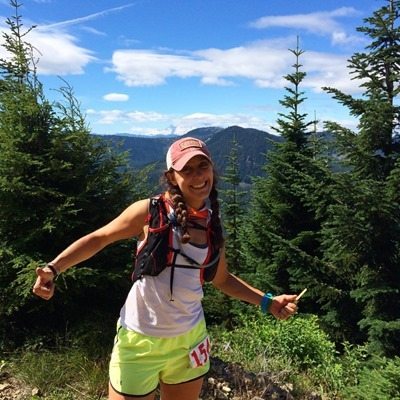 Am I taking sole credit for her race day courage and victory?

No, of course not. That would be ridiculous.

…Because it was a joint effort between myself and Crunchy. And whoever hit Crunchy to begin with, if you want to get technical.

So, if you ever need to give encouragement to someone who is a completely revolting human being (like we are), you may borrow our dearest sweet pet, Crunchy the Possum. 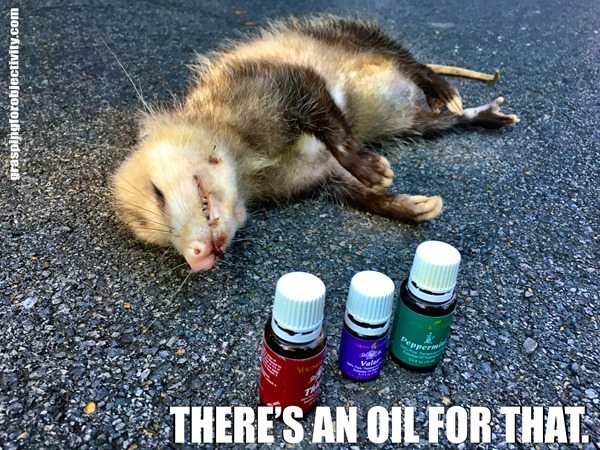 Because there’s definitely an oil for that.

* I am aware that he is technically an Opossum. But just like they’re buggies and not grocery carts in the south, he is most definitely a southern Possum. So deal with it.

** Dear Oilies: I mean this post in the most sincerest form of fun. Just like my Step by Step Guide to Essential Oils. Oh – and that other oil post. But if you still feel yourself irritated at me, please plug some of that Peace and Calming into your diffuser and breathe deeply a few times before you comment.

7 thoughts on “Encouragement for the Sick(o) at Heart.”