For family vacation this year, we went to a mountain “resort neighborhood” that might have been the most confusing place we’ve ever visited.

But that’s not what we’re here to talk about yet.

While we there, my mom, Ali, and I decided to take a tubing trip down the river that ran through the resort.

The bus was frightening just to behold. But we realized we didn’t know what Bus Fear was until we were on the tiny mountain roads in it, groaning and jolting as it failed in the long ascents, and barreling as it felt way too much like a bus-tragedy-about-to-strike while going downhill.

But before the ride, we were left to sit on the bus and consider our future. Ali looked warily forward to the metal box hanging above the driver’s seat.

My mom jumped in and started listing off all the instances that could cause a spill of bodily fluids on the upcoming bus ride.

This did not help Ali’s excitement about the ride ahead.

The Mayberry-esque driver bounded onto the bus and began to count. Loudly. Pointing to each passenger as he did so. It felt very much like a kindergarten class skills demonstration.

Apparently, 34 was not the number he was looking for.

He started his second round with, “Okay. I got one guy standing up.” Then proceeded to count everyone sitting down, starting at one.

As soon as he exited the bus, all 32 passengers agreed: he never counted the guy standing up. The guy that he singled out to remind himself to count. He was gone long enough for us to do an independent audit and discover that there were actually 32 of us.

He came back with a young guy that looked as if he could count. He quickly checked off that we were all there, and sent us on our way.

Thus began the barreling and groaning.

As we reached the top of a long country hill, the driver stood up, turned halfway around, and announced loudly: “Now I know we don’t have no real air conditioning, but this here is country air conditioning!!”

Then he proceeded to dance wildly, flailing his arms about to…create a breeze? All while the bus careened down the hill.

My cautious daughter gasped and let out a tiny scream.

My Mom, in an attempt to distract Ali, asked her what her favorite part of vacation had been so far. Ali was not ready for conversation. Her bulging eyes turned accusingly to my mom and she screamed, “I have no idea but it’s certainly not right now!!”

Once the driver took his seat again, he decided it was time for a chat.

“Okay. I’m gonna go ahead and go over the safety measures so that when we get to the river, we don’t have to do it.”

He then outlined enough information to print on an 8 1/2 x 11 laminated reference sheet.

“There will be three rapids. On the first one, go right. On the second, go center. On the third, go right. Oh – and there’s a fresh tree down over the river. I’ve heard the rapids will take you right into it – go left! DO NOT GET OUT OF YOUR TUBE, and DO NOT GET OUT OF THE RIVER. The river runs through a gated community, and they don’t cotton to me comin’ to pick you up. They give two exceptions: weather and a medical emergency. If you have a medical emergency, exit to the right. If you exit to the left, there are no roads and I can’t come get you. Oh – and right after the third rapids, you need to start lookin’ for stairs on the left – that’s where I’ll be waitin’. That’s the only time you can exit to the left. If you miss them, and it does happen, DO NOT GO UNDER THE METAL BRIDGE. If you go under, you’ll find yourself in rapids that are NOT SAFE FOR TUBIN’, and you’ll have to be on the river for EIGHT MORE HOURS until you dump out into the lake and I can come get you. Got it?”

“Oh – and do NOT take anything valuable on this trip. That includes phones. I had a man lose an $800 cell phone and I had begged him to leave it with me. This river will strip everything you care about away from you. Do you understand??”

Ali looked at me, partially horrified, partially judgey, since she knew good and well that I had my phone tucked into the top of my swimsuit.

We had talked Ali into this little adventure by promising (as the tubing employee on the phone had) that it would be a calm, relaxing float along the river – just like a lazy river! Except a real river! Neither the bus ride nor the bus driver’s ominous speech had made her feel confident in our promises.

We got out and began collecting floats and life jackets, and a worker yelled out at our bus driver, “Did ya bring any of the sticks back?”

“They woulda been real useful for the tubers! The river is movin’ REAL slow today.”

Ali grabbed a short stick for me as we got in, then I strapped our three tubes together with our life jackets. The float started off calmly, except for the 32 panicking people from our bus – everyone was a bit frightened at having everything they cared about stripped away from them.

Meanwhile, the river was barely moving. And I was doing way more paddling than I had in mind for this relaxing tube ride. 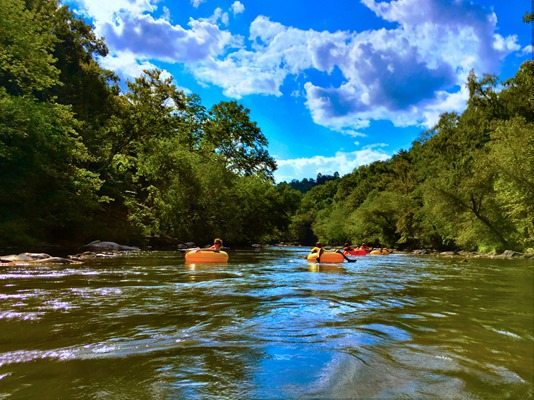 At the first bend, we approached the first rapids. We went right, remembering our right-center-right directions. They were calm, fun, and not at all stripping away of the things we cared about.

At the next bend, the second rapids. We went center, with the same slightly quickened water pace – just enough to make Ali say “wheee!!” with no fear whatsoever (which should indicate that “rapids” was a strong exaggeration.) 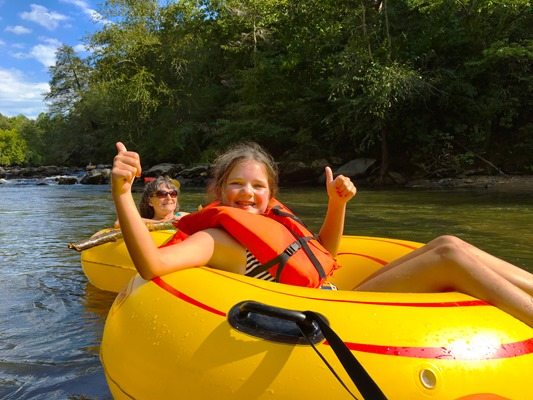 Notice the giant log my mom is holding? Yeah – she managed to steal that from the banks to help us get down this lake of a river.

We saw the third rapids ahead, right behind the freshly felled tree, and began to question ourselves. We’d only been on the river half an hour – it was supposed to be a two hour trip. Surely our trip wasn’t already over…

But there were no stairs on the left.

So we kept on floating. 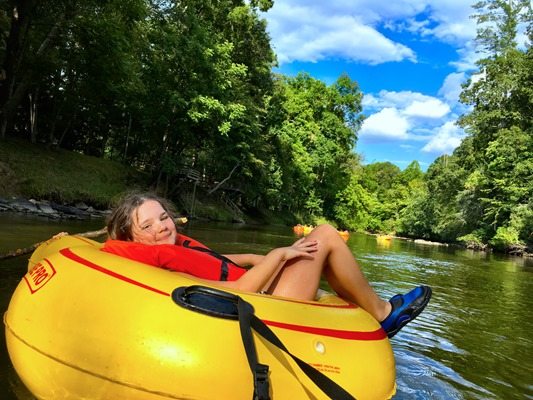 After twenty rapids that were indistinguishable in ferocity from each other and three freshly felled trees, we determined that our driver’s difficulty in counting was not limited to the bodies on the bus.

And also, it didn’t look like two hour time limit was going to happen.

Ali was done after an hour and a half. We kept trying to encourage her, telling her that any minute we’d be spotting stairs.

After another hour, this wasn’t as comforting. She had her chin resting on her fist with a blank look of death-by-boredom on her face.

So I told her, “Tubing and Canoe trips are always a little longer than you want them to be.”

She jerked up and indignantly said, “A LITTLE?!?”

Just past the three hour mark, after another set of rapids in which we repeated for the tenth time “Maybe THIS is the third rapids!!”, we saw it. Glorious, glorious stairs.

And about ten feet after the stairs, we saw the ominous metal bridge that promised a waterfall and 8 more hours of tubing.

We paddled with all our might, little branch and big branch, and secured our spot on the return trip of what was actually the part we should have been warned ominously about – the bus ride.

4 thoughts on “The Varying Degrees of Tubing.”