As a kid, I remember my parents singing us the oldies.

(Not sure what my Mom was doing during the sixties and seventies but really it’s best not to ask.)

My Dad liked the sappy sentimental singers – Cat Stevens and James Taylor and Simon and Garfunkel. Cat’s in the Cradle was my dad’s jam. Still is.

(Although when he found out I could play anything on Spotify, he did ask me to find In-A-Gadda-Da-Vida by Iron Butterfly. So I’m not too sure about his adolescence, either.)

As my parents before me, I find myself often singing the songs of my youth to my children. SURELY they’re not oldies. I mean it was just a couple of years ago when Radiohead released Creep, right? Not that I’d ever sing Creep and in reference to one of my children.

But on an unrelated note it’s really easy to change out the lyrics from I’m a creep, I’m a weirdo to you’re a creep, you’re a weirdo.

But at least I’m not singing Beck’s Loser to them. Right?

I often find that the Oldies of my generation, whether or not I actually listened to those particular songs at the time, apply greatly to my life now.

…When one of my children passes gas, I can’t help but sing The Cranberries Linger.

…Avril Lavigne’s Complicated comes up a lot, too. Because kids always gotta go and make things so complicated.

…Noah can sing Rolling Stones’ You Can’t Always Get what you Want because I’ve sung it to him so many times.

…Oops! I Did it Again is my excuse line when I take too much Mommy Tax and they express outrage at the over-taxation.

But I’ve found that with many of Noah’s endeavors, Jump Around by House of Pain usually applies.

Such as the other day, when he was using his cape to go flying…

(I did a bit of photo magic from this video for him afterward. He’s kind of in love with himself in this picture.) 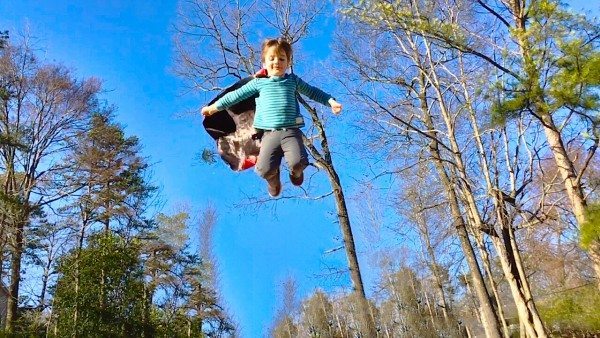 And last summer, when he was jumping over his Uncle Leo, the same song applied…

But the most applicable song to parenthood, SO MUCH of parenthood, is this clip from the really awful song Up in Here by DMX really. It describes the act of raising little humans better than anyone ever has before.

Every parent needs that song clip cued up for daily play.

What songs are the soundtrack to your parenthood?

13 thoughts on “On Oldies and Parenthood.”