I have a friend who is a serious frenemy of my running habits, and she has informed me that I was really close to getting an intervention after I posted this photo of Chris and I a couple weeks ago: 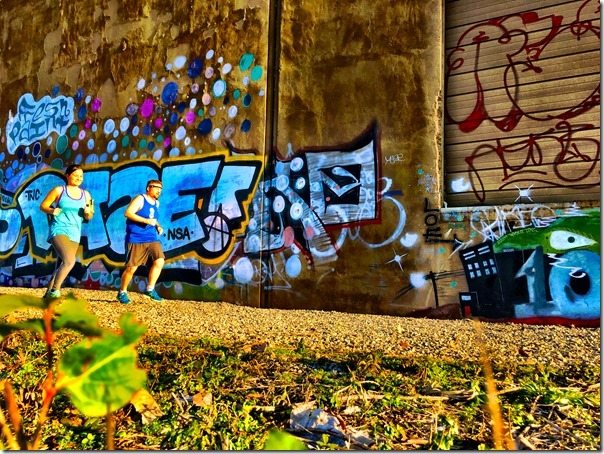 So I do understand that I am pushing some severe boundaries with those of you who are non-runners, and I apologize. I shall try to only be entertaining and not become an annoying runner person. However, if I fail, I’ll see you at my intervention.

This past weekend was our city’s premier running event, the Mercedes Marathon. It contains a weekend of running-geekery, including a half marathon and marathon on Sunday, and a 5K and kid’s marathon on Saturday (a kid’s marathon is where kids run a mile a day for 25 days then run 1.2 miles with all the other kids on the actual race day. It’s sponsored by Blue Cross because they want to pay less for the next generation’s health insurance. I wish they would sponsor my grocery bill and I’d buy more kale and less Lunchables. Okay probably not.)

Months ago, Chris signed up for the full marathon and signed himself, Ali and me up for the 5K. But I did not sign up for any longer races then because for some reason, no matter how mild a winter we’re having or how beautiful the day before or the day after, the Mercedes Marathon/Half Marathon is always below freezing or raining. And I’m a wuss.

But then there was the stupid wreck and I didn’t get to run in a fall half marathon that Chris had signed me up for, and I really wanted to run the Mercedes half – and run it with the vigor and attitude of a rude gesture to two-turd-fifteen. I’m still in physical therapy and I hadn’t run more than 11 miles at once since the wreck (and a lot of that was walk breaks), so I knew it was a risk, but perhaps a worthwhile one.

So my plan was to wait until the 7 Day Forecast came out, decide whether I could take it if it were 20 degrees colder than said forecast, then sign up.

Except that I got impatient. And I decided to go with the 8 Day Forecast. And based on the forecast of Sunday morning being a lovely 47 degrees, I signed up for the race.

Five minutes after signing up, I began to feel sick.

Twelve hours after signing up, I was definitely sick and the 7 Day Forecast came out and dropped the forecast to 17 degrees.

It was like Two-Turd-Fifteen had risen from the dead just to make a rude gesture back at me.

I got myself a steroid shot and antibiotics and recovered rather quickly, but the forecast did not. It would be in the 60s on Friday and the 70s the week after, but that Sunday morning was destined to be below freezing.

Running in the cold isn’t the hard part – standing around in the cold is what I absolutely cannot do. So the worst part for me was thinking about how early my super-paranoid husband would want to arrive downtown to ensure a parking space in the midst of 5,000 people. And how long I would be absolutely DYING before we got to start running.

So naturally, on Wednesday night as he was dozing off, I had the stupendous idea, “What if I could get us a hotel room downtown? And we could just walk to the start line when it was time to be there??? OHMYGOSH THAT WOULD BE AMAZING.”

Except I said this out loud to my asleep husband who was grumpy and sleepy and all like “But I’m going to be getting up at 4am that morning and I don’t want to wake you up and whine whine whine.”

So I let him fall asleep, and then I got my computer. And by some gift from God to make up for two-turd-fifteen, there was actually a room available at The Tutwiler, which is right across the block from the start line.

I dug around in Chris’ wallet in the dark to find his credit card and I booked us that room. Then forwarded him the confirmation email with the note “Hope you’re more excited about this in the morning!”

So for race weekend, the plan was for Noah to go to my parent’s on Friday night, Ali to run the 5K with us on Saturday morning, Then Ali join Noah at my parent’s for Saturday and Sunday so that Chris and I could run the marathon and half marathon, respectively.

On Saturday morning, which was not quite as cold or having as early of a start time, the three of us headed downtown for the Superhero 5K. Last year, Ali and I dressed up as Unikitty and Wyldstyle from The Lego Movie, so this year, Chris and Ali dressed up (and I put on boring-but-warm running clothes.) 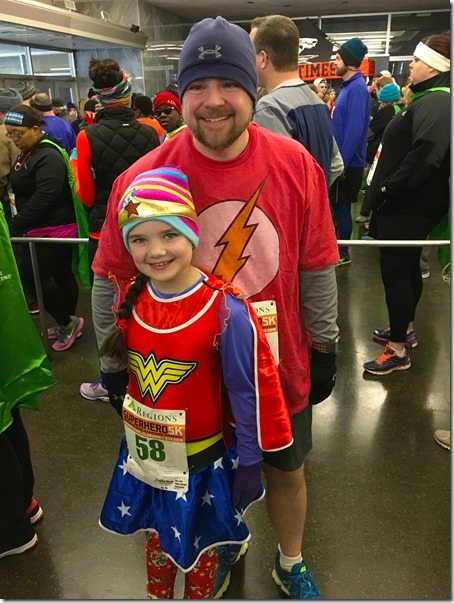 A big concern for Ali is race water stops. She’s horrified by the mess of cups on the ground that she has seen at other races, despite my assurances to her that someone picks up the trash after the race.

“But what about the Marine Animals?!?”

Dora and Diego have thoroughly brainwashed this generation to assume that any trash, no matter how small, how far away from the ocean, or how short a time it is on the ground, will most definitely choke a talking Whale Shark somewhere off the coast of Argentina.

I had told her that she TOO would get to throw her cup on the ground during her 5K, and I promised it would be a lot of fun (somewhat sarcastically knowing my daughter), to which she informed me,

But. That girl threw not one but TWO cups on the ground during her race. I don’t know if she enjoyed it or not, but poor talking Whale Shark.

Chris and Ali ran together, and I ran on ahead and was able to get their picture as they crossed the finish line, Wonder Woman handily beating a Hulk. 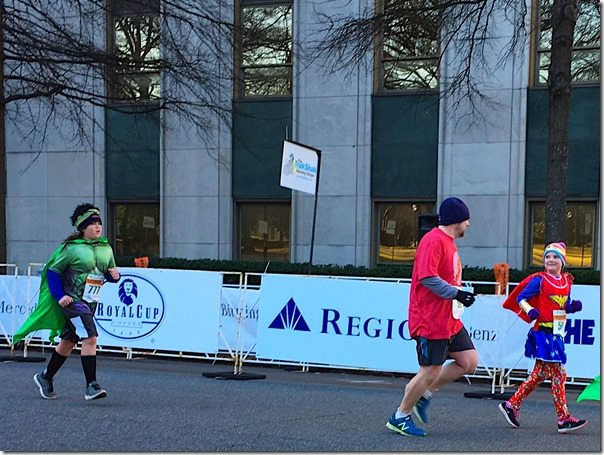 We had celebratory Starbucks with Ali and then dumped her at the Grandparents to start our running date weekend.

(Also, it was Valentine’s. But I’ve already told you I don’t believe in that crap.)

We enjoyed a beautiful sunset from behind the warm windows at the hotel, 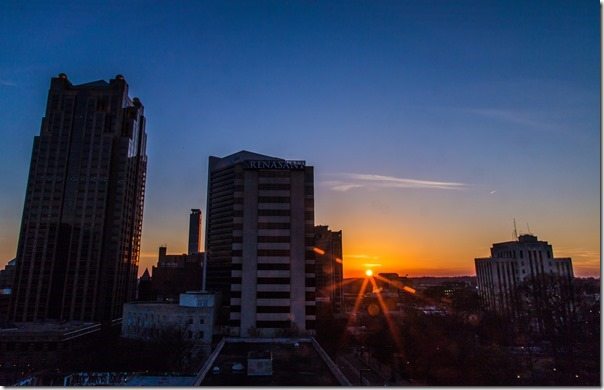 dinner in bed, and going to sleep at 9pm like 80 year olds.

Chris got up at some ridiculous time of the morning that I don’t even recognize its existence, went upstairs to breakfast, and brought me back breakfast in bed – and didn’t even say Happy Valentine’s along with it. Just like I like it.

I’d brought a warm winter coat with me that I was about to donate anyway, because they have a rolling donation station behind the race that picks up all of the abandoned clothes. As it turned out, one of my babysitters was on that rolling cart, so I was able to strip for a babysitter.

And for a good cause!

The wind was nonexistent at the beginning of the race, so the standing around in my about-to-be-donated coat wasn’t nearly as bad as I’d feared. When the race began, Chris took off and left me in his dust, a possibility that I was prepared for. I didn’t want to push my wreck injuries, so I was happy to run alone at a slow pace, enjoying catching snippets of other runner’s bizarre conversations.

Also there seemed to be a large contingent of female runners listening to, and singing loudly along with, motivational gospel music. So the sudden outbursts of “HE IS ABLE HALLELUJAH!!!” were outstanding.

I only stopped for two photo breaks – once when we were running by The Alabama, 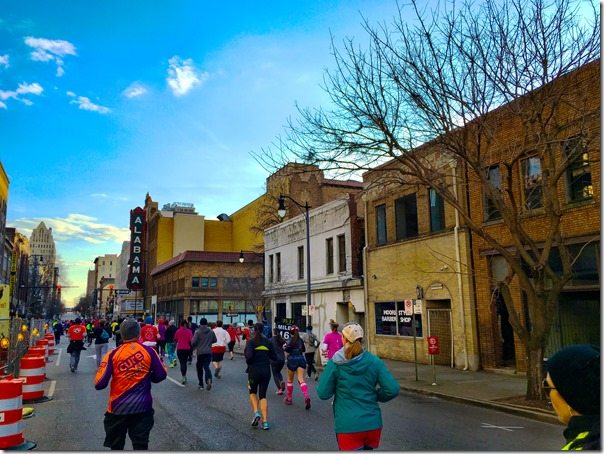 And once when we were coming out of five points south. 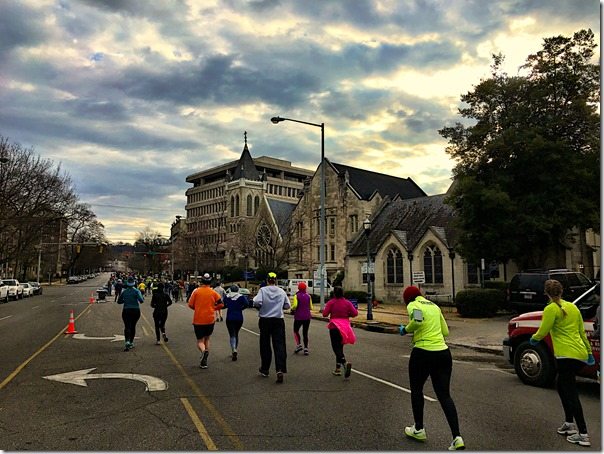 I slowed down to drink a few cups of water and accept lovely gifts such as Gu, Gummy Bears, and Hershey’s Kisses (and took a picture of a cup disaster for Ali), 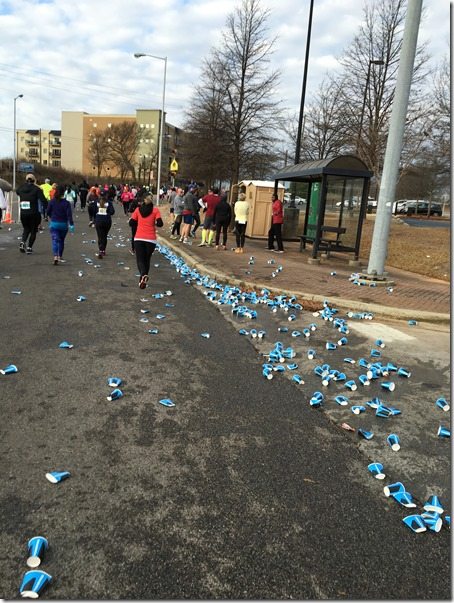 but I ran the whole race. I took no walk breaks, which totally surprised me. I didn’t know I had it in me.

Because Chris had warned me that this would happen, I was looking forward to being lapped by the marathon frontrunner and his motorcade (the marathon is two laps of the half marathon course.)When I was at 11 miles, I heard the parade coming up behind me. He was at 24 miles and moving a just a tiny bit faster than me. 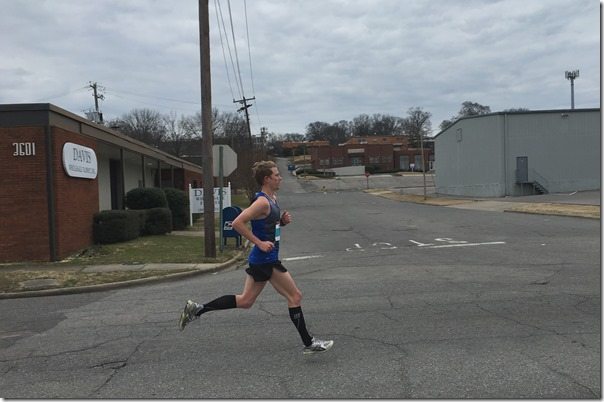 Everyone around me was confused as to what was happening, so I said “We just got lapped, y’all.” The other runners gasped in dismay, and the policeman holding up traffic chimed in with “YEAH you did.”

But I worked hard for my slow race, and I finished feeling great. And beat over 1,000 people while I was at it. 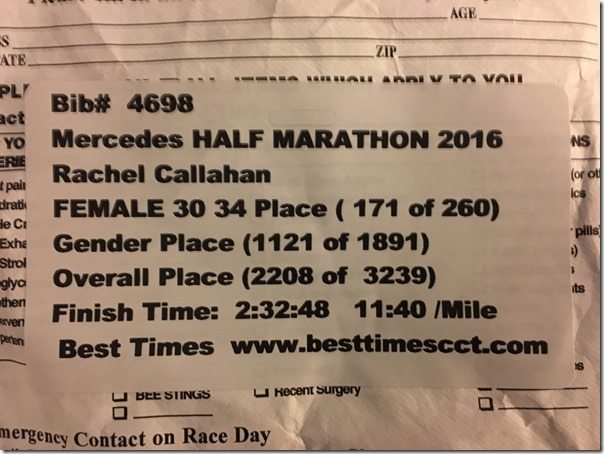 It was eighteen minutes slower than my only other half marathon, so that wreck cost me 18 minutes. And four months of my life.

(In case you want to know how fast some people run, my 50-something year old Physical Therapist finished almost an hour before I did. But that’s why he’s the PT and I’m the patient.) 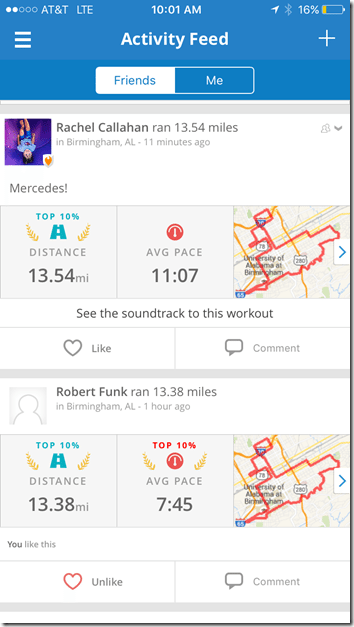 I collected my medal and I mentally pictured it as a rude gesture to two-turd-fifteen. 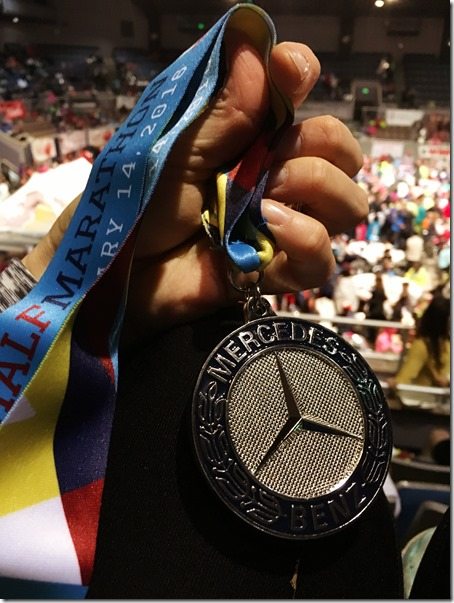 I was victorious. I had done it. That stupid wreck wouldn’t leave me hurting forever. But I sure looked forward to my Physical Therapy appointment the next day.

I stuck my hand in my pocket to retrieve some saved Hershey Kisses from one of the water stops, gleefully anticipating a little calorie bump after the race, which is when I discovered a seriously rookie mistake: I had put my Kisses in the same pocket as my hand warmers. 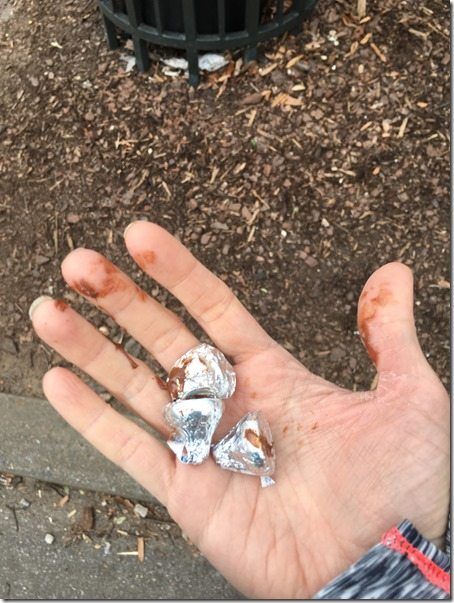 I walked back to our hotel room and washed the chocolate off, got a snack and coffee, and laid on the bed in 13.1 miles of sweat and salt to wait for Chris to finish his second lap.

For the first time ever after a run more then ten miles, I felt fantastic and energetic and giddy and not at all like I was going to die (after my last half marathon I almost had Chris take me to the hospital for what I was certain was Appendicitis but apparently was just over-jiggled insides.) It was the perfect celebration of Not-Valentines-But-Run-And-Defeat-Two-Turd-Fifteen-And-The-Stupid-Wreck. 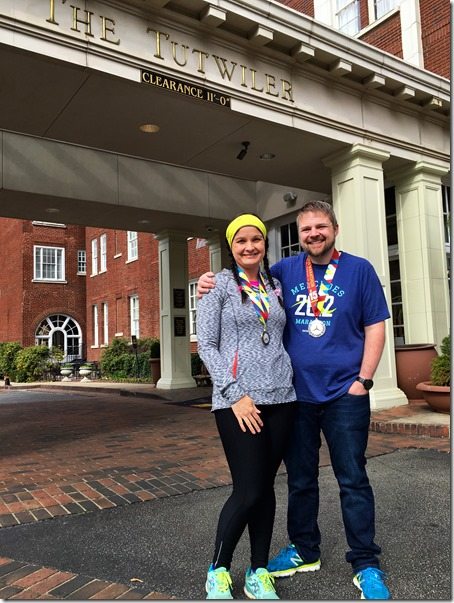 As one of my friends so succinctly said,

12 thoughts on “Running The Weekend Away.”