Introverted Parenting Tip: When traveling with kids, sitting in the hotel bed in the dark listening to tiny snores while chilling with one’s phone and/or computer is absolutely blissful.

But alas. They did not find it nearly as easy to fall asleep as I felt they should. I  began praying hard for God to send melatonin from heaven. I took out a CraigsList ad: “My kingdom for two melatonin gummies.” I researched survival guides for how to make ones own sleeping compound from natural items that could be found on an Alabama mountaintop.

But finally, they fell asleep, Noah not doing so before performing so many flips on his air mattress that he woke up like 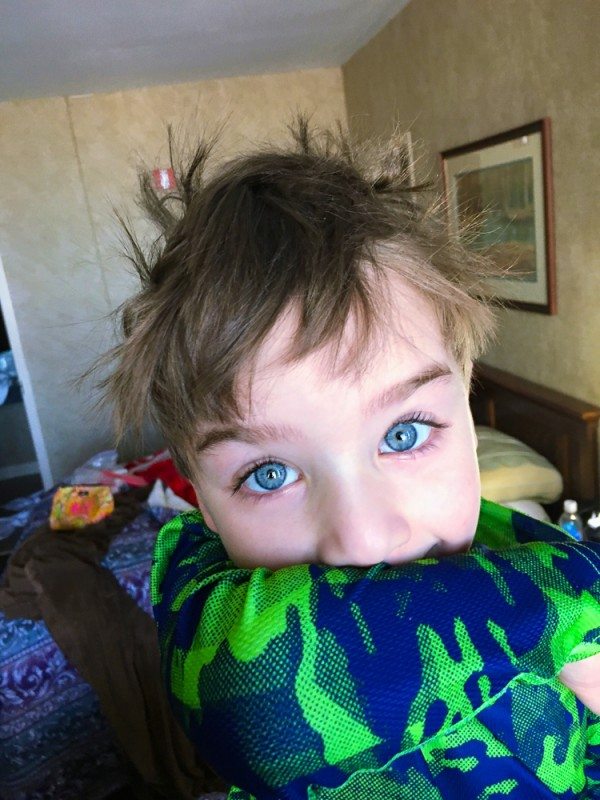 And stayed like this all the way through his morning Ring Pop Breakfast. 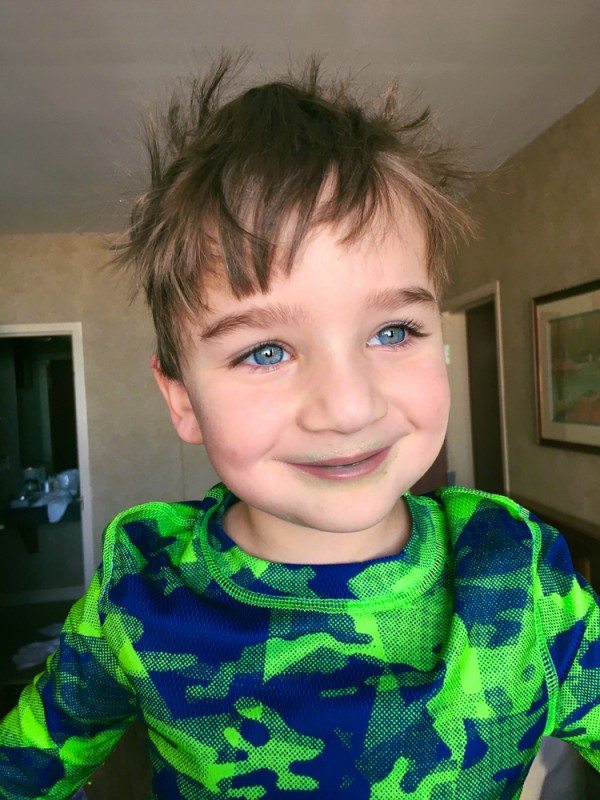 (Because we believe in good nutrition when we’re traveling.)

(And yes. That’s the same pair of long underwear. Pretty sure he wore it for 72 hours straight.)

We wandered outside and found that the snow was slushy and perfect for making snowmen, and the road ice had melted away – or at least, all of the road ice except for one single solitary patch of snow melt / freeze runoff. 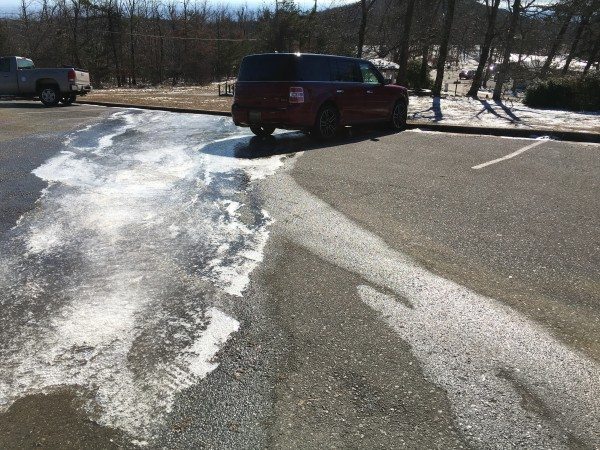 In the one, exact place that I decided to park. 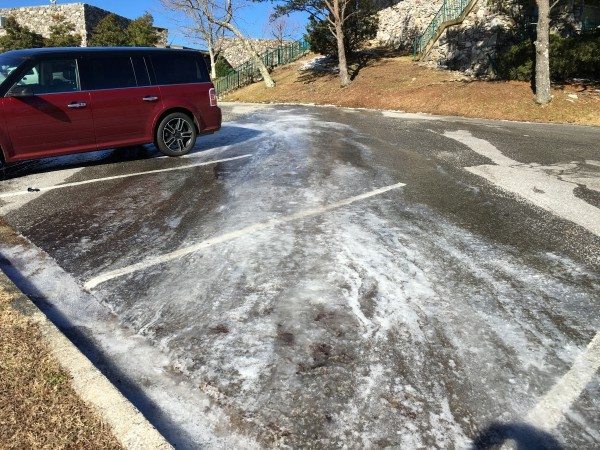 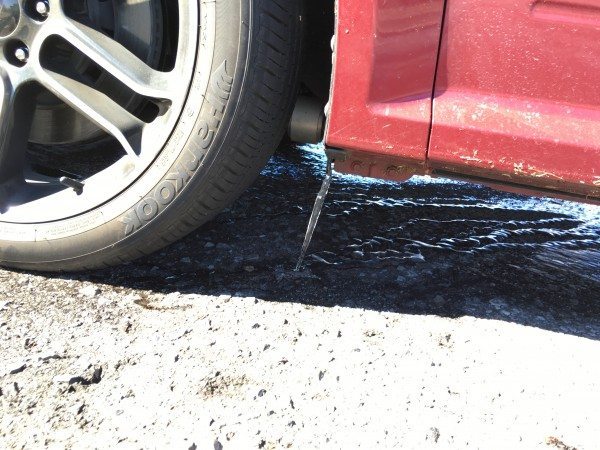 And my car’s shadow was conveniently over the thickest portion. 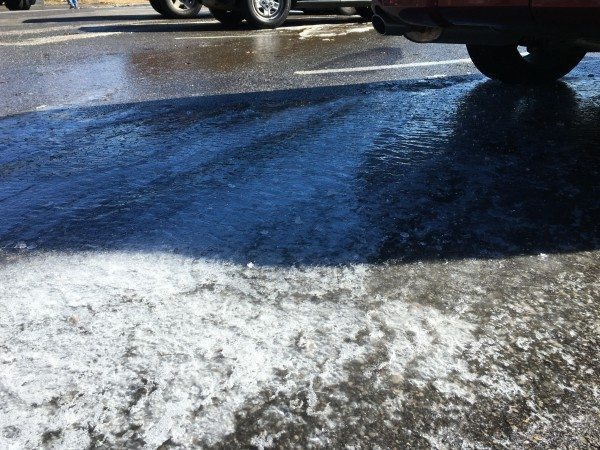 Now. It is worth noting that this was not my original parking spot.

My ORIGINAL parking place was now ice free and in the sun. BUT, on Friday afternoon, at the stormiest, windiest, snowiest, blizzardiest, darkest moment, a fully bearded man in a giant parka walked past our window, then turned and knocked on our hotel room door.

Sarah and I looked at each other, frightened at the horror movie setup of the moment.

I cracked the door to the width of a hair.

“Can I come in??”, he yelled over the wind slicing up the mountain, as our room received a dusting of tiny snowflakes.

I looked back at my hotel room, housing me, another woman, two children, and not even a butter knife for protection.

Seriously at this point I was ready to slam the door in his face.

“I work at the state park just let me in!”

I opened the crack two inches and allowed him to stick his face into the room.

“They told me to come tell you to move your car so it doesn’t slide down the mountain. Park it on the other side of the hotel.”

Then he left. After having spent more time trying to get in from the cold than get us the message. But did I feel bad for making him freeze?

(I mean sure he was nearly dead of Alabama Hypothermia but nope.)

So I ran out into the cold and drove my car around the parking lot. But the lower lot looked flatter than the backside lot…which was just as slanted as the lot I was in…so I made a {very very bad} judgement call and parked in the lower lot.

I was pondering all of this while watching the children gleefully build a snowman on the sunny Sunday morning, wondering whether I would ever be able to leave, with the last two lines of Hotel California coursing through my mind. When another park guest walked up to me and said, “Is that your red SUV in the bottom parking lot?”

“Well, somebody just HIT it.”

I immediately envisioned my brand new car t-boned and crushed, and thinking about how long it had taken me to find the perfect Flex just two months prior.

I ran down the hill, crunching in the slushy snow, only to see a State Park truck parked a few feet from my car – my perfectly fine looking car.

I awkwardly skated over to my bumper, nearly falling on the inch-thick ice several times and actually falling once, to discover that Margo had only acquired her first two tiny scratches – scratches that I could only see after I wiped away the dirt.

(Y’all were right about colored cars, for the record. So. Dirty.)

I rolled my eyes at that state park guest who had felt it necessary to tell me “Somebody just HIT it” without any measurement of the word “hit”, then skated back up the hill.

A few minutes later, the State Park had put out these signs: 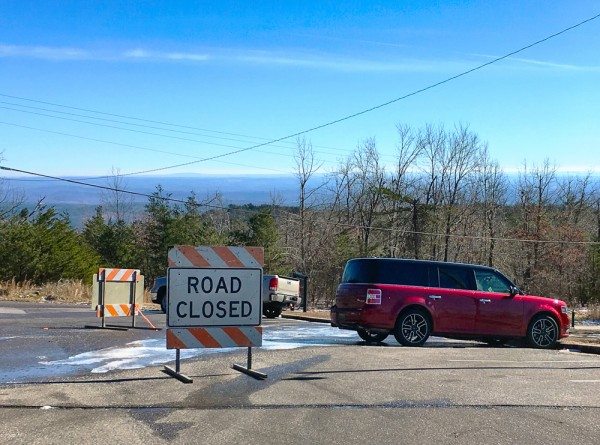 It was the last road closure in the state of Alabama and there was one car affected by it. 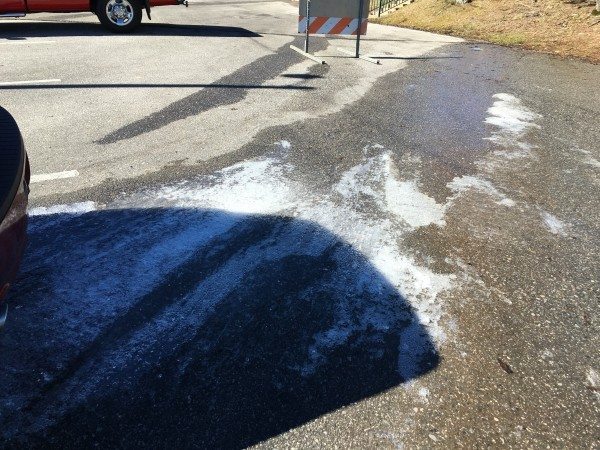 It was now past check-out time, the sunny beautiful day was beckoning me home, and I knew that if I didn’t take things into my own hands, I would never escape.

I scoured the hotel room. A hair dryer! I have an outlet in my car! I could plug it in and heat the ice!

But alas. It was hard-wired to the wall.

Do I have a tire iron in my car?

Any sticks large enough to break the ice? Nope. All the sticks broke. 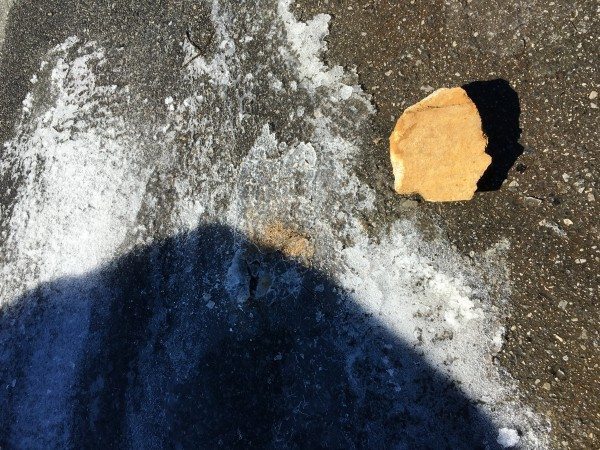 It should be noted that I’m still not released to lift more than five pounds but if I didn’t do something it’s not like I’d ever see my Physical Therapist again anyway, so better to be fussed at than to live the rest of my life at a State Park. 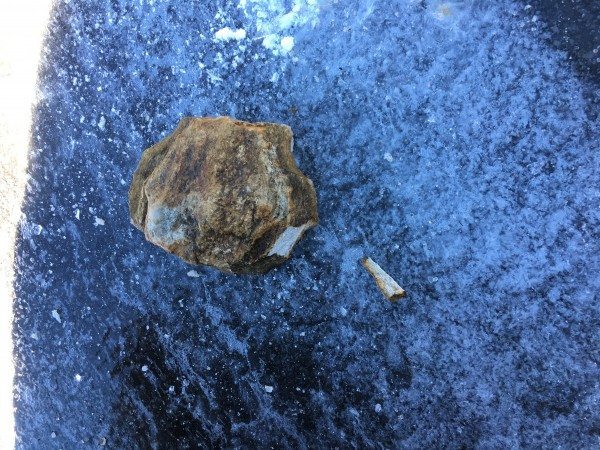 Two state park workers came to help me – The Bearded Dude who’d frightened us greatly Friday night, and Dude who gave Margo her first scratches. The three of us were quite tight by now after all, having lived through the awkwardness and come out on the other side. 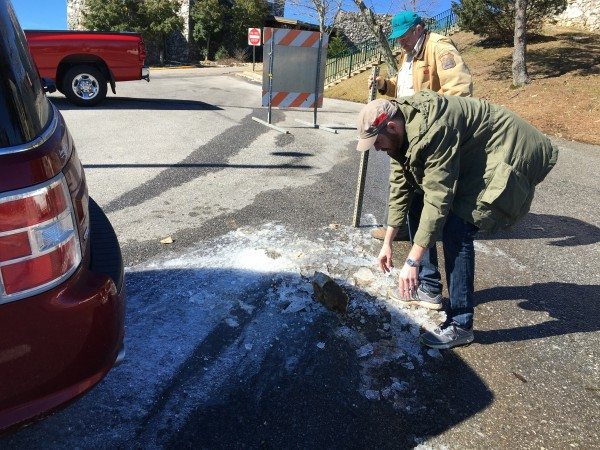 (Bearded Dude admitted to me that when they told him to come help me, he’d said “WHAT? NOT THE LADY IN 116!! She wouldn’t even let me in out of the snow on Friday!!”)

(We also had many delightful arguments about whose fault it was that I was stuck in the ice anyway – I had not obeyed his parking orders, but he had not forbidden that spot and technically it was on another side of the building, and plus he was super scary so how could I trust him….)

Finally, in a moment of overwhelming victory for me and my two new BFFs, I was able to carefully and slowly back out of my Parking Space of Incarceration. And there was much rejoicing. 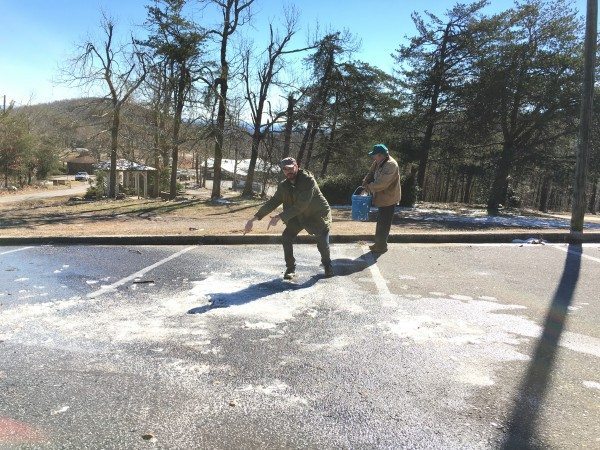 Sarah and I threw our bags into the car and left, dreaming of a fast food lunch.

But my navigation, unbeknownst to me, quit speaking to me on our way out of the park, and so I kept missing turns, and it kept re-routing and giving me longer ways home. By the time I had figured out what was going on, our detour had afforded us to go on multiple back roads and highways (one gravel) that I had never seen in my life. We got to see a quaint water wheel, old downtown Talladega which looked straight out of the Cars movie, 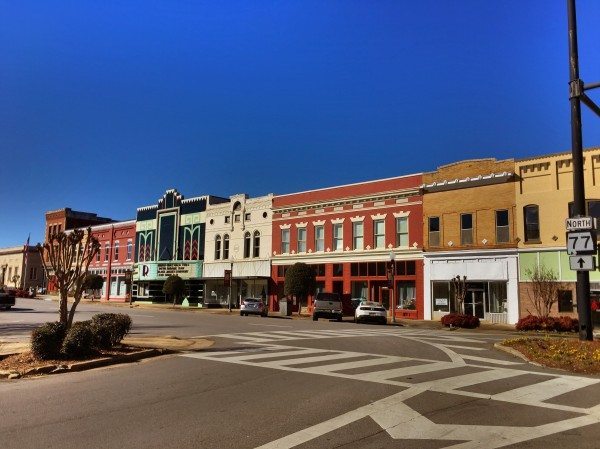 And what appeared to be a dead cow in a field, surrounded by happily grazing cows.

We were staring at it and exclaiming over how stiff it looked and cows don’t usually lay on their sides and were his legs sticking straight out?? When Noah piped up and said from the back seat,

“Jessy gets rid of dead bodies.”

I looked at him in the rearview mirror. “Jessy your babysitter?”

“Yes. She gets rid of dead bodies.”

Sarah turned around and looked at Noah and said, “What do you MEAN??”

(After all, Sarah and Jessy are friends, and this is something you need to know about your friend before you find yourself in the backseat of a car helping her with her hobby.)

But Noah was silent, smiling at us creepily.

Sarah said, “Seriously Noah what has Jessy said about getting rid of dead bodies?

…more silence and a giggle.

Amused at the growing creepiness of this conversation, I said, “Have you BEEN with Jessy while she was getting rid of a dead body??”

He finally said, “This one time we were playing a game and Jessy said to Ali, “Don’t die because I don’t want to have to get rid of your dead body.”

And from that statement he assumed that Jessy regularly gets rid of dead bodies.

Epilogue: We made it home, I haven’t unpacked the kid’s bag yet, and I checked in with Jessy – she said she’d be glad to give me a discounted rate if I hire her to do both at once – “Hey – can you babysit my kids and while you’re at it, do something with this dead body?” Y’all let me know if you need her contact info.

10 thoughts on “You Can Check Out Anytime, But You Can Never Leave.”