This month is my blog’s eight year old birthday.

I don’t usually even think about my blogging anniversary, let alone mention it, because it happens every year. So what.

But this year I’ve been pondering it more – I think possibly because this past year is the first time I’ve ever seriously thought about quitting – and more than once, too.

(I’m not quitting. At least right now. But I’ve never even considered it as an option until this past summer. But all the whys and why nots of why I’ve thought about quitting are another post in and of itself, if the meanderings of my mind hold anyone’s interest.)

Anyway. I’ve been thinking about it in terms of “What exactly have I been doing for the last eight years?And why? And what have been the highlights? And the lowlights? And why should I continue for another eight years? Or why should I quit now before my show has gone on for three seasons too long?”

But first, a giant, huge, crucial disclaimer: I am going to share some of my stats and stuff – stuff I never normally share. I share this only because I’ve had lots of readers that were very curious. I am not sharing it for comparison’s sake or any other weird awkward purpose. Only because I think some of you may find it interesting. For those who may find it obnoxious, please feel free to skip – I intend absolutely zero obnox with this post and would be sad to hear that obnox was taken from it.

So there. I feel better.

Let’s talk some blogging by the numbers.

In eight years, I have…

– Published 2,092 posts.
– Deleted 2 of those published posts. (One of them I deleted years after it was published, and the other hours after it was published.)
– Met at least 6 out-of-state blog readers, and dozens of local blog readers.
– Driven out of state to meet 2 out-of-state blog readers.
– Had one international blog reader come stay at my house for 4 days.
– Filed 2 police reports regarding sketchy internet behavior (one I blogged about, the other I cannot blog about. Which is really too bad because it’d be a good post.)
– Wondered how I offended at least 20 former readers who disappeared suddenly and mysteriously.
– Have embarrassed my mother with my inappropriateness at least 38 times.
– Have had 6 readers go back and read all 2,092 posts. Those are my favorite readers of all time. And they’re a little crazy.
– Have been visited by 228 countries. I am most popular here: 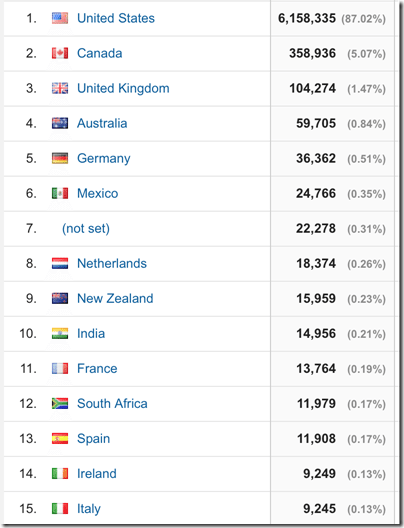 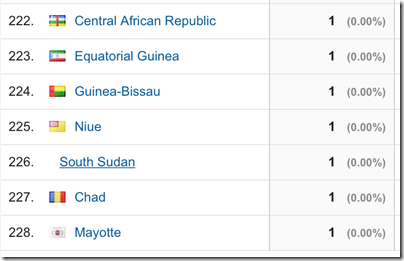 (I don’t blame you for not liking me, Niue. I’ve never even heard of you. Are you sure you’re a real place?)

(Okay I just Wikipedia’ed Niue and it is an island country 1,500 miles from New Zealand with a population of 1,190. So one visit from Niue is an honor! Welcome, Queen of Niue!)

In eight years, these were my blog’s visitors… 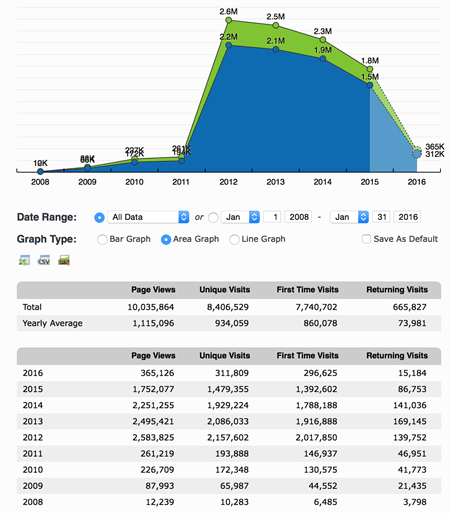 So yeah. 2012 was the year my butt went viral, and it increased my traffic by ten times. That was also the year that I tearfully had to give up reading all of my reader’s blogs (something I had been loyally committed to for four years) because I starting having to use that time to answer butt comments, butt texts, butt emails, and butt Facebook messages.

(I’ve since quit answering butt questions, for the most part, but oddly enough, that time never came back.)

Of my 2,092 posts, here were the most popular by the numbers:

1. An Inconvenient Gap of Truth, July 2012 – 4,824,746 hits. That’s right – 48% of all the visits my blog has ever seen were to one post. And oddly enough it still accounts for 44% of my hits – even though the information in the post is, as many people have kindly (or not so kindly) pointed out, quite outdated.

3. Mom Jeans and the Dreaded “Long Butt”, March 2009 – 490,447 hits. This was the original jeans post – the mother from which all the others were birthed. And I was wearing some seriously awful shoes and socks in that post.

5. Geography, Pre-K Style, July 2009 – 253,822 hits. FINALLY A POST WITHOUT BUTTS. This video still makes me smile to watch. (And for the record, Noah did not follow in his sister’s Geography Prodigy footsteps.)

6. Downton Abbey MBTI Chart, November 2013 – 225,607 hits. Of all the Downton Abbey Graphics I did, this other one was my favorite. But apparently not the people’s favorite.

7. New Studies Prove that Replacing Mom Jeans Can Result in Surgery-Free Liposuction, March 2009 – 130,228 hits. (Winning the longest blog post title in the history of the world…) My Mom was my beloved model for this post, and it freaks her out that her butt has been pinned 900 times. It did not help at all when I told her that my butt had been pinned 380,000 times. I’m pretty sure she’ll never join Pinterest for fear of unexpectedly coming across her own butt.

8. Yes Virginia, There is a Miniature Giraffe, March 2011 – 122,170 hits. This post is interesting because it’s not a post that people have shared, it’s a post that people have found via Google searches. Every now and then I’ll blog about something that many people are searching for and no one else is writing about, and because of that, it will be a popular post. Other examples of this are sippy cup mold, tonsillectomy recovery, the Dilemna Dilemma, and whether or not Harry Connick Jr. has had plastic surgery.

There’s definitely a trend in the top 10 posts – all of them (with the possible exclusion of the Downton Abbey post) contained somewhat helpful information, which is the type of thing that people like to share on the internet. 99% of my posts are not in the least bit helpful, but they’re significantly more fun for me to write than the helpful ones. As such, my favorite posts are none of the above. They’re the ones where I was able to write creatively about an experience or thought, or was able to turn my own personal crisis into a moment for laughter.

Fifteen of my favorite posts, not in any order, are:

(I put their hit numbers on, too, so you could experience the stark contrast of the unpopularity of unhelpful creative writing on the internet.)

Very, very rarely, I’m inspired to write about something serious. These are my three favorite serious posts from the past eight years:

I personally refuse to vlog, but I loved having Noah do these two posts:

– Noah’s Fashion Pointers, Volume One, August 2013
– Fashion Statements of Fact, September 2013
(And really, I enjoyed all of Noah’s guest posts. That was an especially fun stage of writing. I should have another baby. Or not.)

Most awkward moments that came about from blogging:

– I had a guy I didn’t know that well come up to me in the sanctuary at church one Sunday and say “I absolutely LOVED your post about your Colonoscopy!!!”

– One of the pastors at our church came up to me at a birthday party and said “Rachel. OH MY GOSH. Your post about Chris’ Vasectomy.”

I gulped and said, “Uh oh. I really pushed the envelope with that one. Am I facing church discipline?”

He said, “It was amazing. PLEASE push the envelope more often.”

(Okay that moment wasn’t awkward. It was awesome. But I sure thought it was about to get awkward.)

– Having to apologize to people for writing about them in what I thought was a humorous way but…they didn’t take it that way. That happened twice. As such, I now have a policy of always asking my friends before I blog about them.

Seriously. I angst about everything. Ev-er-y-thing. Here is a sampling of my most common internal angsts.

What if no one thinks this is funny? Why has no one commented? Oh my gosh no one has even liked it on Facebook I’m the worst writer ever. I’m totally losing my ability to put thoughts together – stupid dysautonomia! What if someone thinks I’m talking about them and I’m totally not? Oh I bet she’s going to be offended (causing awkward feelings next time I see person I’m paranoid about.) Oh no I just realized that person reads my blog there’s no way they aren’t offended or find me highly inappropriate because I am actually highly inappropriate. Why am I so inappropriate? I should be more ladylike – I bet that’s what my mother says to herself all the time. Why has no one still commented on this post? Oh no I really am the worst. Why have people quit commenting? Why do people have to read on their iPhones so it’s so hard to comment? What am I saying – I do everything on my iPhone. Oh man I’m so behind on answering comments I hope no one thinks I’m snobby! I love my readers and want to talk to them why don’t I have time? What if everyone takes that blog post wrong and reads it in the complete wrong voice? I HAVE NO BLOG IDEAS THIS WEEK WHAT AM I GOING TO WRITE ABOUT. Seriously oh no! I’m never going to have another writing idea again surely I’ve run out of ideas! NO ONE HAS COMMENTED ON THAT POST STILL!! I’m really the worst. Why am I so the worst?

Yes. No matter how many posts you write or how many years you do it, blogging is still a highly angsty undertaking.

I hope you’ve enjoyed this behind the scenes look at my blog. Feel free to ask any follow-up questions about blogging – I don’t talk about it often, so now’s your chance! I’ll be waiting over here in my puddle of angst.

43 thoughts on “Eight Years in a Nutshell or Two.”