Our family’s introduction to Crack Muffin came about in a bizarrely serendipitous way.

It all started last summer. We were at our usual grocery store one day, casually shopping for our usual groceries, which did not include any boxed baked goods. As I surveyed the cracker aisle for the cracker option that was on sale that week, a rather desperate looking firefighter in half uniform (not full uniform – he wasn’t wearing the big fireproof jacket or anything – he had on one of those too-tight t-shirts that showed off his firefighting muscles) nearly bumped into me as he frantically scoured the aisle.

“Oh, sorry,” I said to his massive forearms.

“Can you help me? I can’t find them anywhere!”

“Sure! I shop here all the time. What are you looking for?”

“Well, Church of the Highlands did a SERVE day at our precinct and they brought these amazing mini muffins with them. We all LOVED them. We asked where you buy them, and they said that they got them from THIS grocery store. So all the guys sent me to get some. I don’t know the brand name but I’ll recognize them when I see them.”

How hard could this be? And does this firefighter not know that boxed baked goods are disgusting preservative bombs?

But I agreed to help because I’m here to SERVE, much like Church of the Highlands.

(Church of the Highlands is Birmingham’s mega church, and one of the things they’re known for are their SERVE days. They blanket the city with red t-shirts and Facebook statuses while serving the community in an endless variety of ways – including, apparently, crack muffin.)

I looked up and down the cracker aisle with him, but there were no mini muffins. We checked the chip aisle, the baking aisle, the baked goods area – no muffins. We found some Little Debbies on the endcap, but he said that he would have remembered if they had been Little Debbie. But in an act of near-resignation, he said, “But how could Debbie go wrong, amIright? I’ll grab these just in case.”

We parted ways, only to run into him again a couple aisles away, and then again two more aisles away.

He was a desperate man. He NEEDED crack muffin.

I kept looking for random mini muffins on each aisle I traversed, but could not find any.

Until…we were walking between the next-to-last aisle and the absolute last aisle, and there was a table set up with Entemann’s snack products on them.

And there they were – large boxes of Little Bites.

I knew this had to be what he was after, and I also instinctively knew that he had given up his search and was about to leave.

They ran across and up the store to find him in the opposite corner, as I suspected – in line to check out. He saw them running and his eyes lit up.

He knew we had found them.

He jumped out of line and followed the children as if they were the Pied Piper of Crack Muffin (which they were.) They led him to the back of the store to the table that housed Little Bites.

He was practically leaping with joy and promised my kids the best fire station tour of their lives.

He filled those lovely forearms with a sufficient number of boxes to feed a herd of firefighters (almost all the boxes) as the children begged me to let them experience this magic of muffin as well.

I am vehemently opposed to pre-packaged baked goods. I don’t eat Little Debbie or feed her to my children. Powdered mini donuts and Ding Dongs give me the heaves. The amount of preservatives that it takes to make baked goods taste good until the year 2034 seriously skeeves me out. I’m no granola crunchy organic kale eater, but pre-packaged baked goods go past my limits. They’re hanging out in my no-fly zone with Cheese Curls, McDonalds, Waffle House, and Jack’s (with the exception of their iced coffee) – I just don’t believe in them.

But Crack Muffin was buy one get one free. And our firefighter friend was acting like a toddler in an all-you-can-eat candy store. So against my better judgment, I told the kids to pick out two boxes from the vast expanse of nearly (and newly) empty shelving.

And that was the moment that marked the end of their non-addicted lives.

I tried one of these mini muffins and they were surprisingly fresh and soft, as if Entemann’s had magically transported them from their oven to the package right before we opened it. I still couldn’t get over my pre-packaged snobbery to love them, but I didn’t hate.

But the children. The children became immediate junkies, needing Little Bites to survive the morning. And the afternoon. And the night.

At four mini muffins to a pack and five packs to a box, their habit quickly became expensive. They began selling their stuffed animals on the street corner to pay for their next fix. Or at least that’s what I thought about suggesting every time I saw the empty boxes.

As Little Bites became a part of our lives, I was shocked at how many other people already knew about Crack Muffin. As it turns out, many of our friends and their children had been addicts for years and we had no idea.

Even our babysitters knew of Crack Muffin and joined me in my fight against the children overdosing. 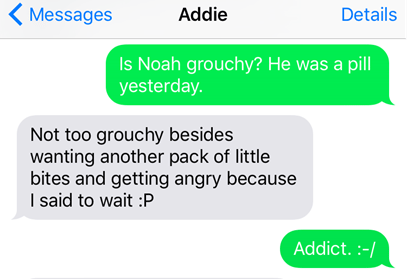 The situation became severe, but I couldn’t wean them because I was afraid of their systems going into Crack Muffin Shock. And so we live, trying hard to keep our addictions in check, silently blaming the fireman who introduced us, and the SERVE team who introduced him.

SERVing is awesome, but beware of a person in a red T-Shirt offering you a muffin.