Volumes I and II can be found here and here.

I adore my regular readers and their lovely and encouraging comments – I seriously cherish with all my heart. But the random Googlers that find my blog and leave bizarre and angry comments also have a special place in my heart. As such, the time has come again look at the best worst comments I’ve gotten in the past year and a half. Because I love people. And they love me. Or something like that.

The Dilemna/Dilemma post received the largest amount of fascinating new comments. This is the post that I discussed the bizarre situation that many of us find ourselves in – completely convinced that dilemna is the way to spell dilemma, and upon trying to find out how I could have been so deceived, I discovered that one of the theories is that there’s a whole group of us that somehow crossed over from an alternate dilemna-spelling universe.

Tony was by far my favorite commenter on this subject. I may or may not have dramatically read his comment aloud well over a dozen times. 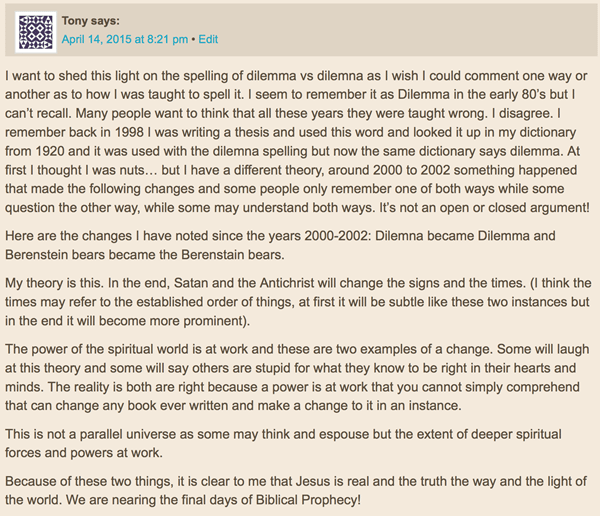 Who knew Satan cared so much about the dilemma of alternate spellings? I certainly did not. Nor have I ever attempted to prove my faith in Jesus Christ based off of spelling anomalies, so clearly I’m gravely shallow.

And then there was poor Naima. Or more likely, her possibly former husband.

Another post I wrote, a very tongue-in-cheek (and, I thought humorous but apparently not to all) look at the reasons why I homeschool, brought out a jewel of a human being – you know, the friend we all need – the type that tells us clearly and plainly how very wrong we are. 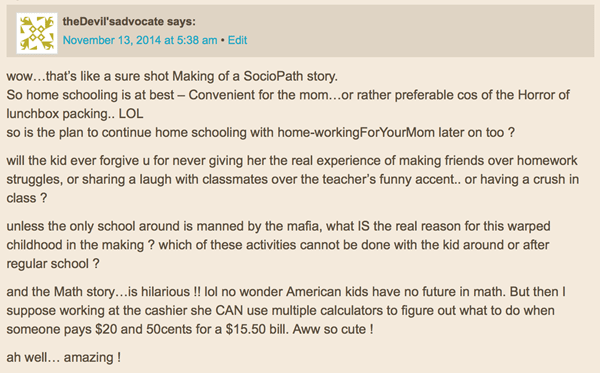 My poor warped children, living such a boring, unadventurous, anti-social life…how WILL they ever forgive me? AND WHY HAVEN’T YOU GUYS POINTED OUT THIS BLIND SPOT TO ME BEFORE?!

An early post I wrote that was a personal favorite received a five-year-late response. The post was about Kiosk Warfare and the in-depth strategy one must take to avoid getting spritzed, curled, or otherwise attacked by mall kiosk workers. I wrote the post in 2010, but Carmela the angry kiosk-worker found it in 2015.

She is so, SO correct. I would definitely not last a day.

Speaking of late reactions, a mere nine months after I started blogging in 2008, I wrote a piece about how much I despise honking my horn. Jeff found this post just last month, and had some wisdom he felt needed adding.

And here I thought hitting my key fob twice armed my alarm system. Thanks, Jeff, for letting me know that I’m really just a narcissist who is obsessed with the fact that I have a standard automobile feature.

In January of last year, I wrote the latest installment of my sleepwalking injuries (thankfully the least injurious of the entire collection.) Six months later, Kathleen felt that she had some very pertinent information to share: 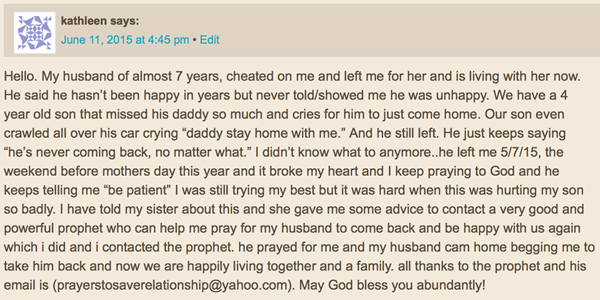 Put that email address on speed-dial, y’all. You never know when you may need it.

(And if her husband is living with the other woman now, how is he also happily living back at home? I love it when the present situation changes halfway through writing a comment.)

Of course, a year couldn’t go by without having some serious feedback on my ever-viral (despite being sorely outdated) denim posts.

The most popular of the series, written in 2012, is specifically about Gap and Old Navy jeans being Mom Jeans. Am I aware that Gap has dramatically updated their jeans since 2012? Of course. Have I felt like writing another 20+ hour research post about it? Not yet. Does that mean I should take down a post just because it’s outdated? That’s not how the internet works. Unless you ask Jessica…

Because clearly I OWE it to the internet to spend another month of my life redoing this post. How dare I not update it.

It’s my favorite when people find a dated post and complain that it’s dated. DARN THAT PASSAGE OF TIME!!!!

Mary Ann had a broader view on the problem of denim…

Well there you go, ladies. Jeans were made for a man. That’s all there is to it.

And finally, my proper cursing post brought out a couple of fantastic comments. My friend Kristina totally got trolled by the somewhat bizarrely named “SauceEatn”. Normally I don’t allow trolls to troll other people on my blog, but I knew Kristina could take it, and for the life of us, no matter how many times we read the comment, we couldn’t quite figure out what Mr. (Ms.?) Eatn was trying to tell us… 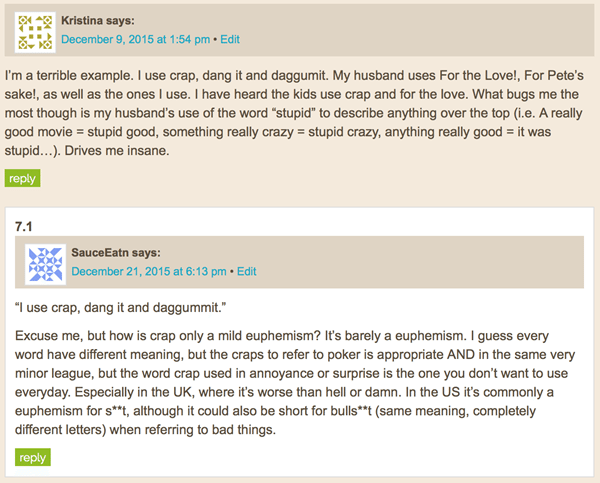 So is it a mild euphemism, barely a euphemism, a horrible euphemism, or what exactly? Maybe one of you can diagram his/her sentences and solve the mystery for us.

And as a last jewel to offer you, this comment was on the same cursing post, and from my friend Christen. It’s not a Best Worst Comment – it’s just a Best Best Comment – perhaps the best comment I received in all of 2015. Unfortunately, emojis don’t come over when you leave a comment, but just know that anywhere there’s an unexplained blank space, Christen had inserted a Smiling Pile of Poo:

There’s nothing quite like a Granddad’s sweet nothings to boost your self-esteem.