Yes – we’re back around to this. AGAIN. It’s the dead squirrel that just won’t die.

It’s just that Sloppy The Squirrel was just too good of a friend to let go.

And, although I did not buy my dear friend Tanya the note cards or canvas that I considered, I did create her a present from Sloppy.

I chose this particular reincarnation of our furry friend because I know Tanya. And I know that there is nothing that could better start off her days than drinking coffee out of a dead squirrel.

So I designed her a fully-involved coffee mug, with the image wrapped around for a full three-dimensional experience.

I was given the choice as to what color I wanted the handle and the inside of the mug, and although “Blood Red” was a tempting choice, I went with a calmer “Sunflower Blue”, paying homage to how very much Sloppy would enjoy cracking open one last sunflower seed.

But then. When I completed my order and went back in to check it one last time, I was horrified. 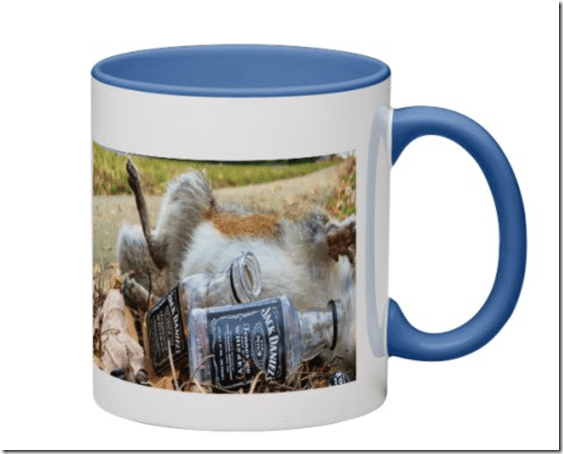 According to the order specifications, THEY HAD CHOPPED POOR SLOPPY’S HEAD OFF.

This was not okay.

Not okay at all.

Had I missed this when I was approving the design? Had I ordered a faulty mug? Or had his head gotten unfairly treated in the passage of bytes from my computer to Vistaprint headquarters??

So naturally, I opted for chat support, because I needed this addressed immediately. Garcia was a lucky man to get to check into my very special problem.

I was much happier knowing that Sloppy was still fully in tact. So all there was to do was wait for it to arrive, with no pre-warning, to Tanya’s house.

One very meaningful day, I got this barrage of texts. 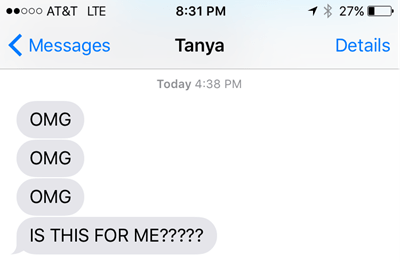 It took me until the fourth text to realize what she was OMGing. But that fourth question – if I wasn’t afraid of ruining the moment, I would have said, “Do you THINK I ordered a dead squirrel mug for someone else and accidentally sent it to you? Because I think the chances of that happening are less than zero.”

But I let her simply bask in her excitement over her life goals being met. 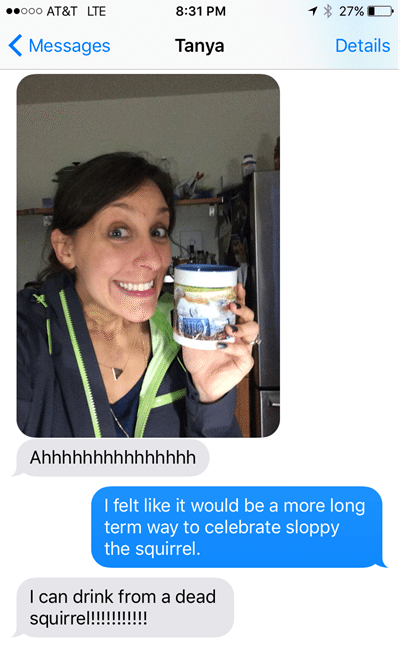 After she calmed down enough to decrease her number of exclamation points, I asked after the cognitive health of poor Sloppy. 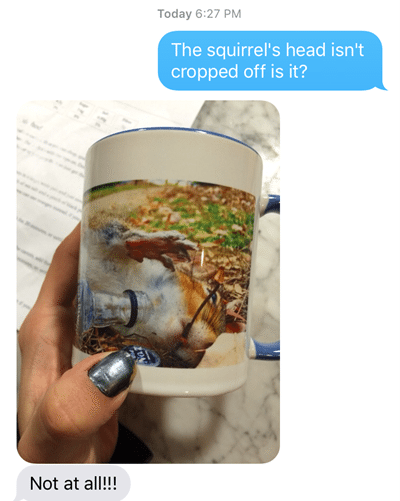 Relief and bliss washed over me.

I expect this coffee cup to come up on every gift ideas listicle for 2016.

10 thoughts on “Re-gifting The Squirrel.”