So, although The Great Wreck seems to come up in most blog posts to explain one facet of life or another, I haven’t really updated about the recovery process itself in a while. Mainly because it’s not my favorite thing to talk about – it gets old and it’s seriously hard work to make it all funny, and I’m really not a fan of whining. The last time I did update you, I was in a euphoric state, convinced that I was almost better. I have since learned that it’s best to not allow oneself to think such dangerous thoughts – because the very next week, everything broke again.

I’ve had three or four cycles of that in the past 11 weeks – where I’ll get excited because I think I’m healing, only to crash the very next week. So I will say that I’ve been having a really great week and a half – even better than that last euphoric week – but I’m not going to say that it’s all going to be uphill from here because it most likely will not. I have, however, quit taking ibuprofen around the clock and rarely have to take muscle relaxers – so there’s that.

So. The wreck was 11 weeks ago from Wednesday – which is really just insane to process. When I texted Chris that day to tell him we’d been hit head-on, my leading line was “We’re fine” – and I truly thought that we were. It hadn’t occurred to me that adrenaline is such a liar. I’ve pondered several times the thought that if I had known then what I know now, how devastating that day would have been. Ultimately I’m very thankful that I’ve found out things slowly and didn’t know the full breadth of the recovery process and the long weeks of pain I’d have.

So, to recap, here’s a summary of the injuries that have been found at this point:

– Most importantly, the kids are now fine, thank goodness – they had a kid version of whiplash, but it healed in a couple of weeks, and they haven’t had any more problems, although Ali does tend to blame the wreck for every headache, stomachache, and hangnail. Because why not.

My injuries are as follows:

– Two bulging discs and a torn disc in my neck, all three of which are injuries that just take a long time to heal – they’re not surgically fixable, nor are they really treatable through my Physical Therapy. A neurosurgeon offered to give me a pain block, but I haven’t gone that route yet.

– A damaged muscle in my left leg – this injury has been especially long in recovering, although it does seem to be getting better slowly.

– Damaged ligaments and muscles in my head, neck, and shoulders, which has resulted in a lot of pain in the affected areas as well as nerve pain in my arms and hands.

– The resulting worsening of my dysautonomia from all of the above and the necessary laying around I’ve been doing for two months.

– TEN FREAKING POUNDS OF WEIGHT GAIN. That is totally and absolutely injurious.

I am still going to Physical Therapy three times a week – I am over 30 visits in now, so I’m pretty sure I should qualify as Patient of the Year. Around week eight, my PT began ramping up my therapy to try and get the knots in my neck, shoulders, and leg to quit returning (he used the term “chronic pain” once and I told him to never utter such a foul phrase again.) Instead of sticking needles in me and electrocuting me on separate occasions, he began electrocuting me through the needles that were inserted straight into the damaged muscles.

I looked and felt like a dead car battery. 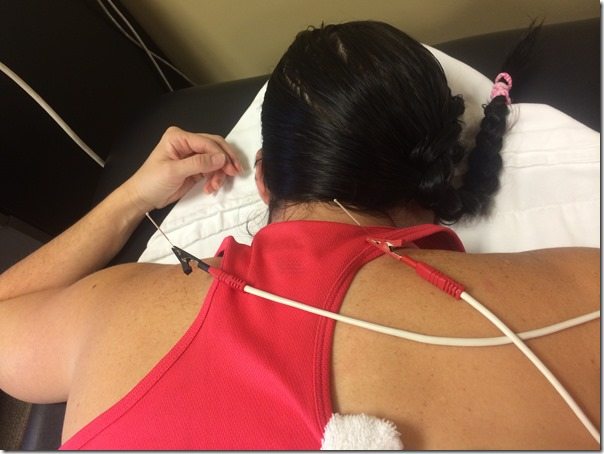 The neck electrocuting needles are kind of warm and tingly-fuzzy, but the leg ones are intense. 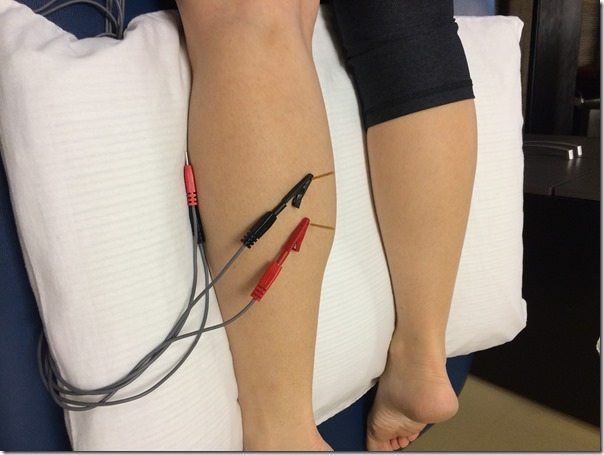 Of course, because I care about your full experience of my healing process, I Periscoped this process. It wasn’t easy, laying on my stomach and holding my phone behind my back while my leg had lightning rods in it, but what can I say. I’m committed.

I know. You’re all super jealous of my awesome spa treatments.

Although I am able to run (to help my dysautonomia) with some regularity during the periods of time when things aren’t re-broken, I still can’t sit with my legs down for more than half an hour or my back gets really achy. Because of this, I’m continuing to spend a lot of time in bed (I haven’t worked in my office since the wreck – Chris got me a rolling cart for a temporary bedroom office.) Also, I have become the church diva, stealing pillows from the lobby for my neck and claiming a half-pew for my legs. 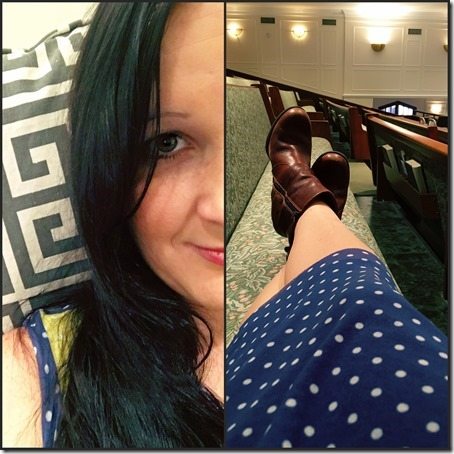 My biggest point of anxiety has been starting back school with Ali, but I bought her a lap desk, and she and I are doing her school in bed (which, for the record, I did all of my homeschooling in bed growing up, so she’s just finally getting to be as lazy as her mother.)

Because of my significant hours a week in physical therapy and my also significant hours a week of lying around, the remainder of life is quite busy and backlogged right now. I’m managing things as best as I can, and Chris is infinitely helpful and tireless in his serving of me. But I am in a place where I’m finally starting to feel like I’m able to regain control of parts of my life. I’m at least attempting to lose that ten pounds that was just the cherry on top of the whole thing, so I’m taking some supplements and eating carefully, which is also helping my energy levels. My house is still the biggest chaotic disaster ever (I haven’t been approved yet to lift more than five pounds, so laundry baskets sit downstairs for weeks and Christmas paraphernalia is still in the middle of everything), but I’m getting caught up on work and keeping up with Ali’s school and trying to still blog and run Picture Birmingham. But if I write less blog posts than usual or I’m slower answering emails, comment replies, and other correspondence, all of this would be why.

(I should start answering all of my emails with “I’m sorry this took so long – I was entirely too busy laying in bed.”)

Finally and most importantly, thank you. For those of you who have checked in on me, those who still sent me Christmas Cards even though I didn’t do a blog reader card exchange this year, and those who sent me thoughtful little gifts, I cannot tell you how much they have meant to me. I love that you love me even when I’m not doing much to actively love you back. To Mary, who sent my kids Canadian Chocolate coins (who knew? Canadian Chocolate Coins are more tasty than American Chocolate coins!) and dear Melissa who sent me another box of The World’s Best Chocolate-Covered Cherries, and to all of you who have cared for us during this complicated time, I love you dearly. Thank you for thinking of us, for considering me a real friend even though most of us have never met (I totally consider all of you real friends), and for loving on our family when we needed it.

2016 looks like it will be a good year. I still feel quite refreshed by the changing of the calendar, and plan on it being absolutely fantastic.

8 thoughts on “Updates of Life and Injuries.”