Every fall, as the weather shows the first signs of getting cooler, I become a little bit manic.

Because Alabama falls are so magical. And so fleeting. Because if it’s cool today, it’s gonna be 90 degrees tomorrow. Then it’s gonna go straight to 40 degrees and – oops! You missed fall.

And also, I love fall. Not the basic-white-girl Pumpkin-Spice-and-Scarves-and-Boots type of fall, but the smell of the leaves falling, the clear, crispness of the air, the beautiful colors, and the outdoors. Yes, I’ve loved Fall since way before it was cool to love fall – and the proof of that is that my birthday falls right at the cusp of fall, making it therefore magical-by-association since I was old enough to understand birthdays.

In years prior, when the kids were younger and therefore not as mobile, my fall manicness has mainly been a burden that Chris has had to bear. The first time I got a whiff of leaves, I would start begging him to take me out of town. Up to north Alabama. To the mountains. To a bed and breakfast or a lodge. It was an urge within myself that I COULD NOT control.

I’m not typically a naggy, demanding wife for stuff or experiences, but fall is always the exception. Last fall I got so desperate that I experimented with traveling alone with children. It wasn’t so bad.

But this year, they’re older and sturdier. Ali has been running and hiking for a year (to impressive lengths – we’ve had up to a 4 mile run and a 6.75 mile hike, the latter of which was kind of an accident that she may never forgive me for but she brings it up with pride every time we go hiking), and Noah can hike with minimal whining on a happy day.

So, at least for the early part of fall (I mean it is JUST BARELY fall here), I’ve been able to quench my Fall Fever by taking the kids hiking locally. We started a few weeks ago having one hike a week. But last week, my mania reached a new level, and we went on three hikes in four days for a total of 7.6 miles. Pretty sure my kids got in their PE credits for the week.

On Monday for our first hike of the week, I felt as if we needed a new adventure (my manic fall-ness demands a bit of intrigue), and so I chose the hike down to Peavine Falls at Oak Mountain State Park – a trail I’d never done but heard was “fairly steep.”

We set off on a nice, wide trail that was quite pleasing to the kids. 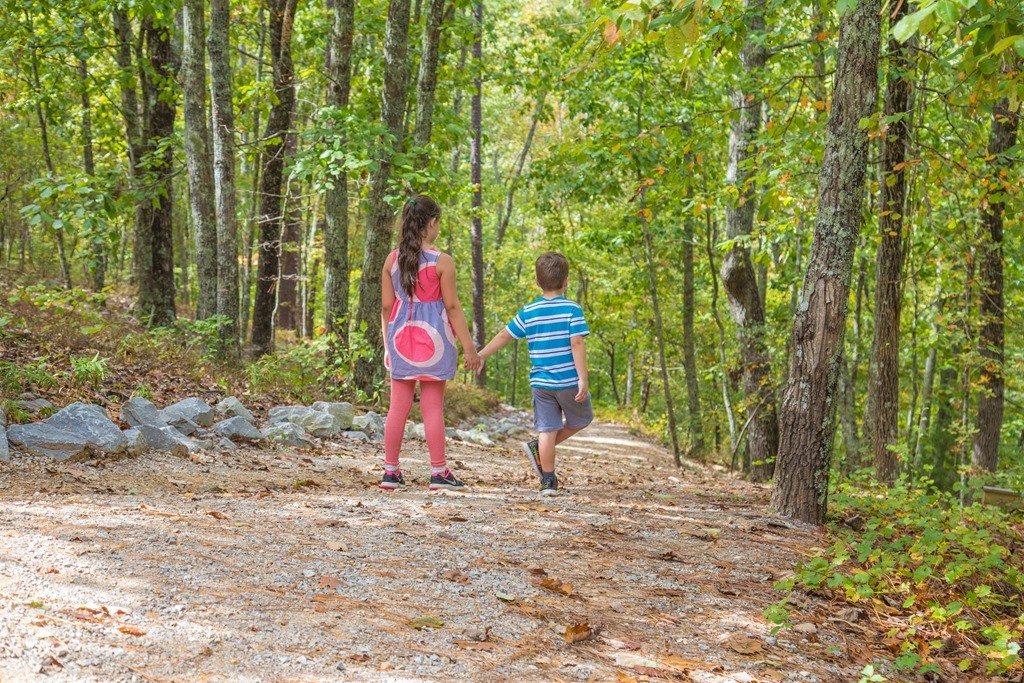 And then we got to the Peavine Trail. The way down was scary. Not adult-scary, but four-year-old scary? Absolutely. It was nearly straight down, and Noah was not happy about it. I knew I could get him down with a bit of coaxing and a lot of hand-holding, but what about back up? I worried greatly at what I had done to our future.

We got to the bottom and Peavine Falls was barely a trickle. Had all been for naught? 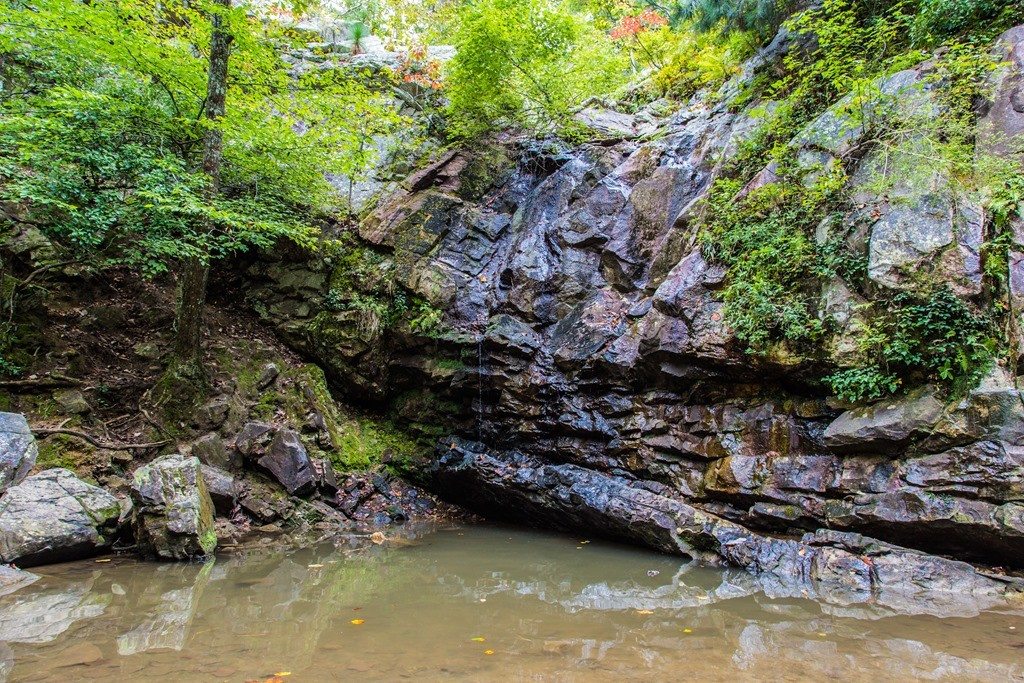 I decided that we would sit and play for a while before I attempted shoving my kid up the side of a mountain. Noah always prepares for hikes by packing his backpack with all sorts of sugary snacks, so he was more than happy to sit a while and rest his chainmail. 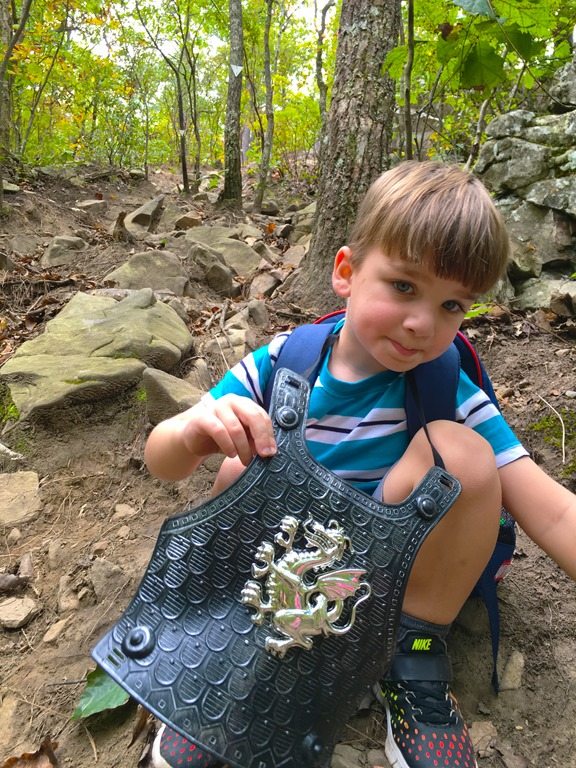 While eating muffins and Fruit Roll-Ups, Noah found a microscopic inchworm. We all studied it and I praised him highly for his nature eye. Which made Ali determined to also find some fascinating bit of nature, which is how we came to meet Luna. 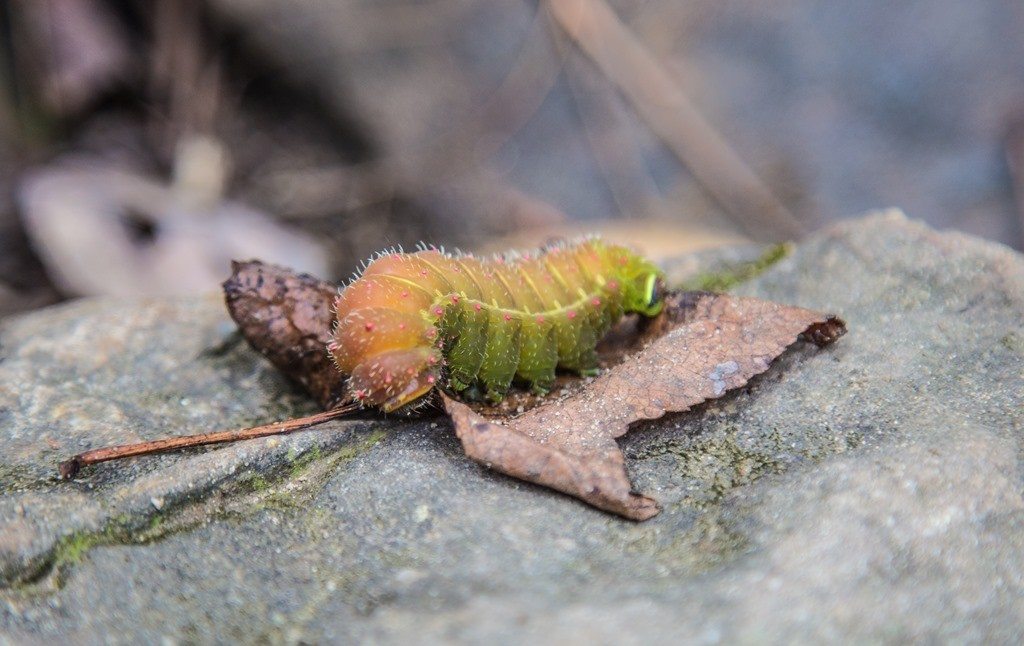 She was quite possibly the most beautiful creature with more than ten legs that I’d ever seen, with her endearing cankle fat rolls and rubbery translucent skin. 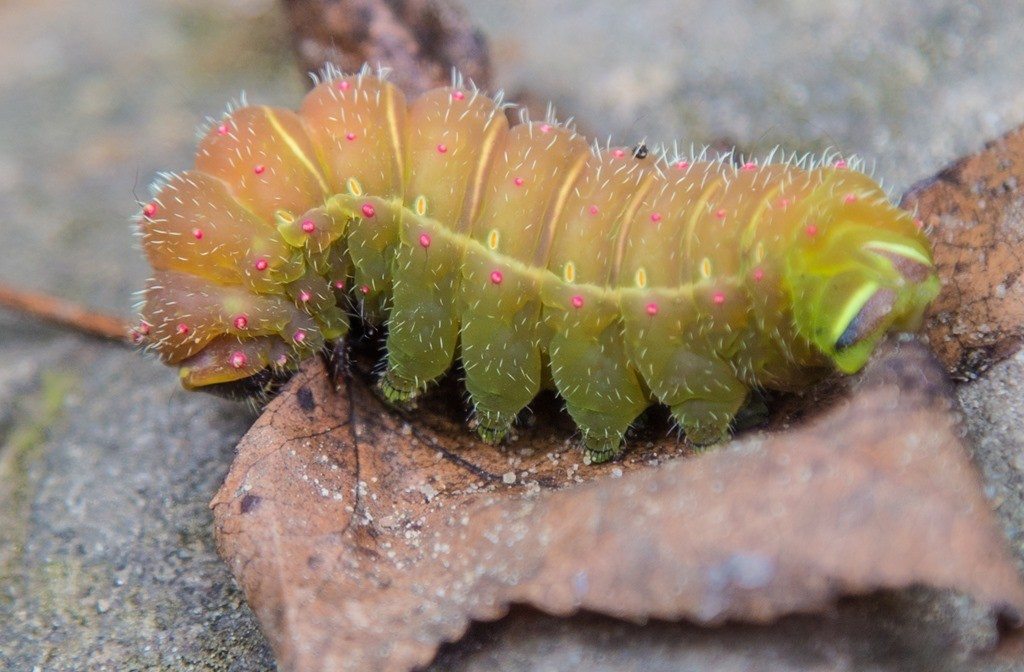 Thankfully, the bottom of Peavine Falls has good cell service, and Luna was more than happy to grasp a piece of pine straw so that I could see all of her angles for scientific Googling. Look at those thigh dimples! 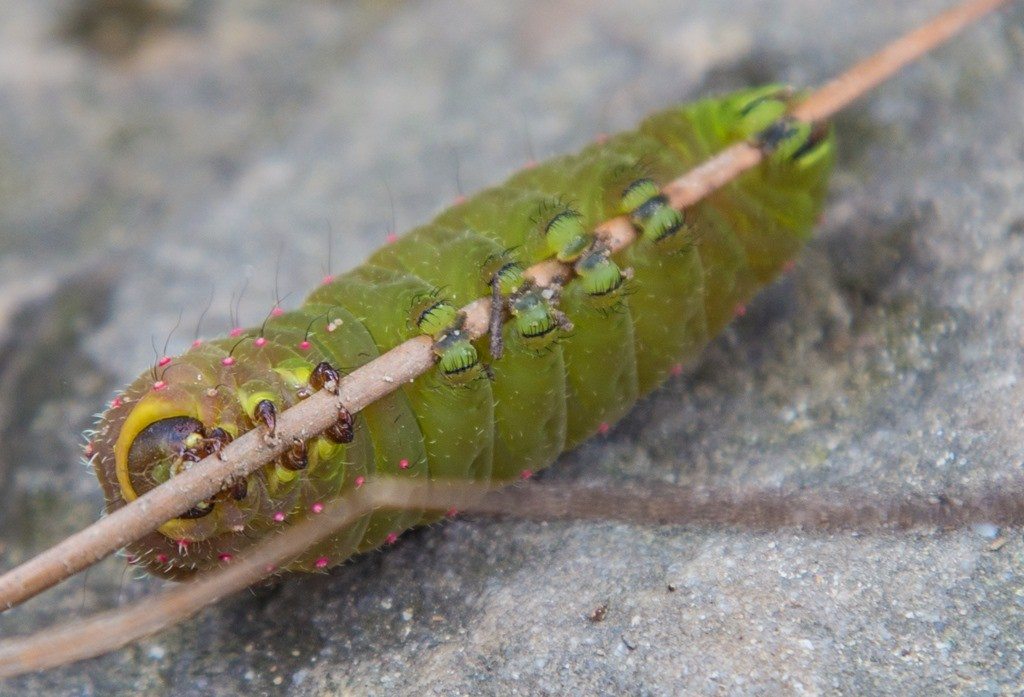 We discovered that she was a Luna Moth caterpillar (hence her name), and that the orange color she was sporting showed that she was getting ready to spin a cocoon.

Ali begged to take her and keep her and love her forever.

I reminded Ali of our steep hike down and how there was no way she could keep Luna from getting smooshed on the way back up.

She began frantically searching for temporary housing. Noah had packed down a game of Spot It from his Chick-Fil-A kid’s meal, so she bartered with him, promising to give him her Spot It cards if she could use the plastic case from his set to carry Luna.

Noah was not happy with this idea, but I made him agree to it.

Unfortunately, Luna’s generous fat rolls did not fit in the Spot It case.

So Ali went back to thinking.

We hadn’t drank any of our packed water yet, so she put Noah and I to work taking turns with giant gulps of a Dasani so she could have the empty bottle.

She carefully rinsed it in the stream, put leaves and sticks in it to make a homey carrying case, and I gently plucked Luna off of the rock and nudged her into the bottle.

(Because of course Ali didn’t want to touch her beloved new pet. Just to gaze upon her and learn all the things about her.)

“Can we go to the pet store? And the bookstore? And the library? I need a cage! And an instruction manual! I need to study everything about taking care of Luna.”

Now my job was to get a four-year-old, an eight-year-old, and a rotund caterpillar out of a canyon that would almost certainly require some light rock climbing.

I strapped Luna to the outside of my camera bag (because Noah was decisively not having her in his backpack) and we headed up.

Shockingly, because climbing up rocks is way more fun than shimmying and slipping down them, both kids scaled the side of the ravine quicker than I could even keep up with them. Who knew? Up is easier. When we got to the top, I miraculously still had a happy hiker. 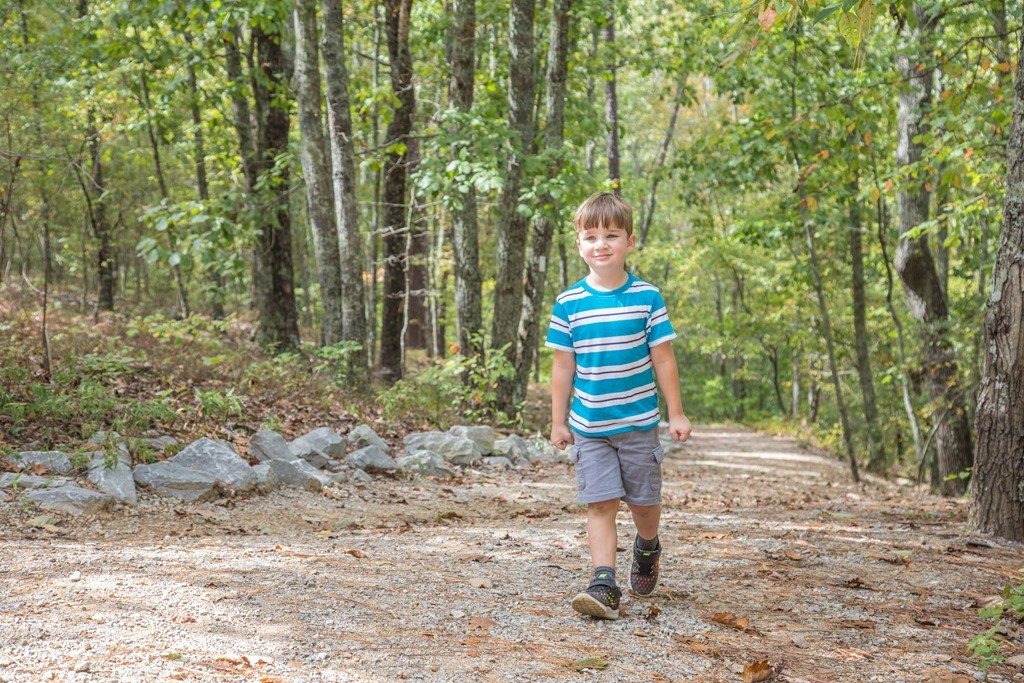 …a Happy Hiker who was very much looking forward to the promised playground bribe, even though his sister was much more interested in getting proper care facilities and instructions for her new pet.

I kept my end of the bribe and took them to the playground while I snapped a couple of pictures of Oak Mountain’s beautiful Lake. 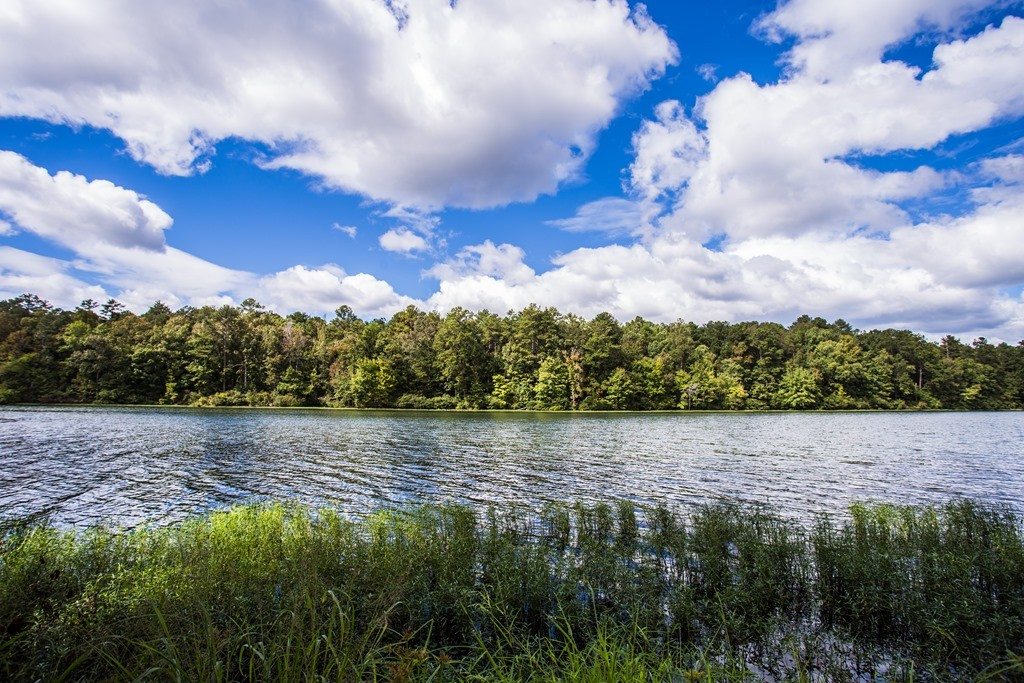 Ali very carefully positioned Luna, putting her in the shade on my tailgate, and not completely screwing the lid onto her Dasani home so as not to suffocate her. Until that gust of wind knocked the improperly sealed bottle off the car and I found Dasani, open, on its side, pointed underneath my car, and a “quickly” waddling Luna midway under the vehicle.

So I did what any good mother would do and crawled under the car, caught the escapee, and put her back in her apartment.

We had native leaves, lake water, and proper home from the pet store all obtained on behalf of Princess Caterpillar.

But when we got home and Ali went to dump her into the carefully Feng Shui’d and much larger permanent residence, she said “Mom! What’s this sticky stuff Luna put on the inside of the water bottle??

She had apparently become accustomed to her Euro-sized Dasani apartment and had the very beginnings of a cocoon.

“BUT MOM!! If she cocoons in there and comes out as a giant Luna Moth, how will we ever get her out?!”

Ali’s logic was inescapable. Luna Moths are quite massive.

There wasn’t much silk yet. Surely this could be remedied. Without putting much thought into it, I shook her gently off the side and she plopped in her new home.

Later that afternoon, Luna looked different. Her skin had changed color to a darker magenta and her body wasn’t as rubbery.

I put on a matter-of-fact face (because Ali is very matter-of-fact), and explained that she could be going through one last molting, or she could be dying. But on the inside, I was feeling giant heaps of guilt regarding what could be a future caterpillar death.

We Googled some more. We adjusted the cage. We got her out in the sun and grass to boost her serotonin (do caterpillars get serotonin?) We did everything we could, but by Tuesday morning, Luna’s fate was sealed.

We “buried” her in the flower garden, and Ali was unemotional about the entire thing. I, however, was filled with silent angst over the death of such a magnificent creature (and kept reminding myself that she was just a caterpillar and I’d probably unknowingly stepped on three of her sisters trying to get down to Peavine Falls.)

Ali and I clinically discussed each step in our encounter with Luna. Did we not bring her enough leaves that she liked? Maybe. Did we put too much moisture in her cage? Quite possibly. Should I have let her cocoon in that Dasani bottle and worried about getting her out later? Probably. Then I reminded myself that this was still absolutely education – Ali was guiding me along the paths she was interested in, and we were learning both the good and hard lessons about life and nature.

“Hey Mom – can we go on a hike today so I can find another caterpillar? They’re my second favorite bug behind butterflies – and isn’t that convenient??”

Yes, she was definitely pursuing her interests.

2 thoughts on “Fall Fever: The Tale of Luna.”