After school on Tuesday, we set out on another hike – this time to a place that I went constantly as a kid but had never taken my own kids – Tannehill Ironworks State Park. They were in love from the start. 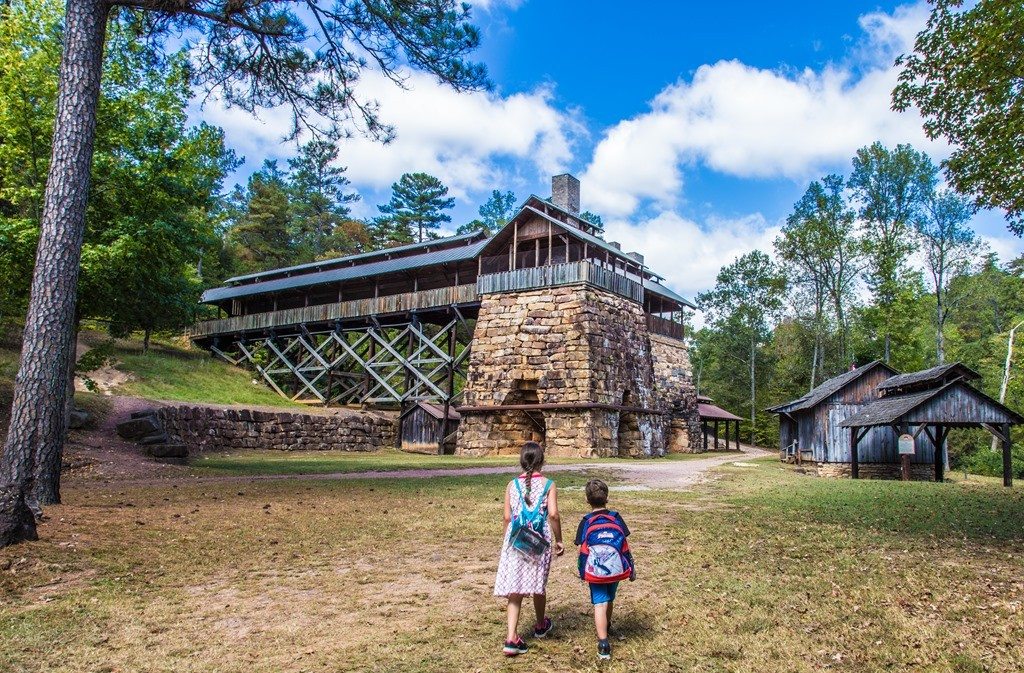 They ran in and out all of the inlets of the old Ironworks buildings, 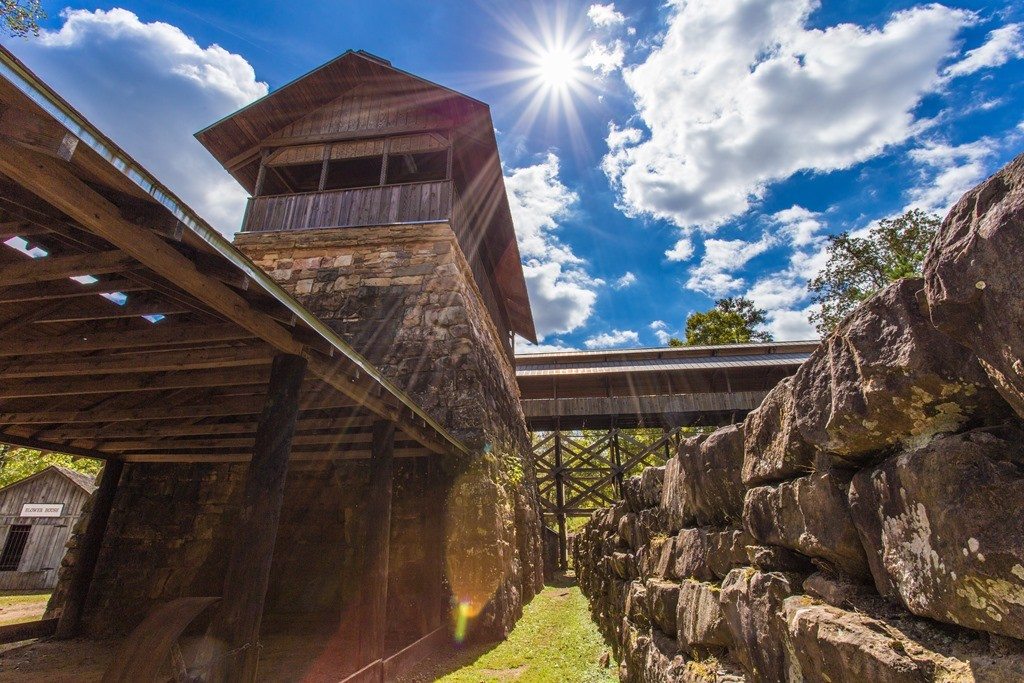 Creating all sorts of fun games and imaginations. 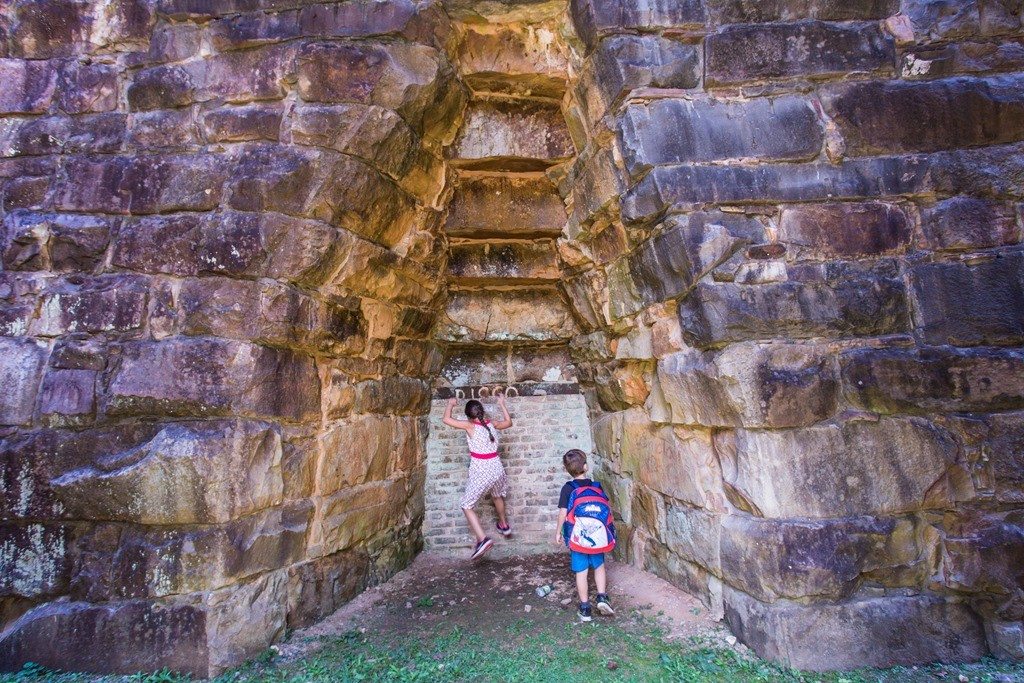 The paths were wide and flat, which made Noah very happy. There were also many benches along the way for snack breaks, which made him even happier. And on one of those benches, I found a small, hairy caterpillar – which absolutely thrilled Ali. 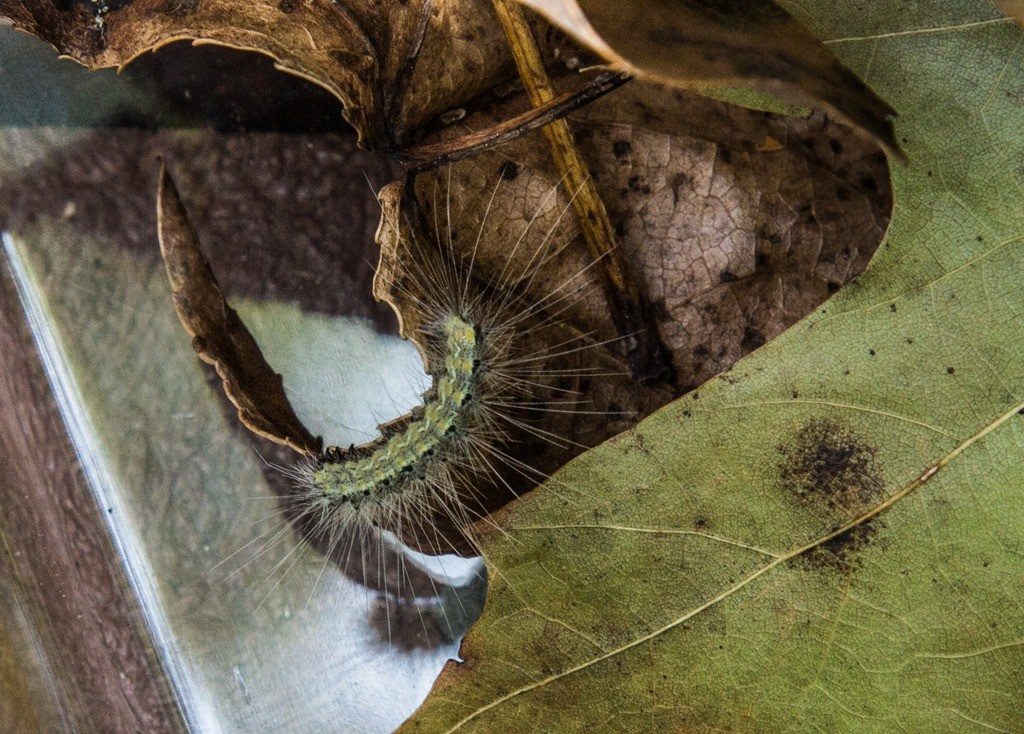 “Her name is Luna Junior!!! Mom! Look her up and see what kind of caterpillar she is and what I need to put in the cage with her!”

(Because of course she’d packed the large caterpillar cage this time to prevent the need for temporary housing and therefore the risk of premature cocooning.)

I Googled and informed Ali.

Luna Junior was a Fall Webworm, would eat any of over a hundred varieties of leaves, and I couldn’t find any care information about her because she was considered a pest. In fact, the only information on the internet about Luna Junior was how to kill her, not keep her.

Ali was shocked. “What? How hard could it be to kill her that we need that many instructions? She’s tiny! It’s not like you’d need an ax or anything.”

Kid logic is the best.

We hiked from the Ironworks to the beautiful old mill.

Or at least that was the plan, until we were all three so busy looking at the ground right in front of us to find friends for Luna Junior that we almost stepped on this guy. 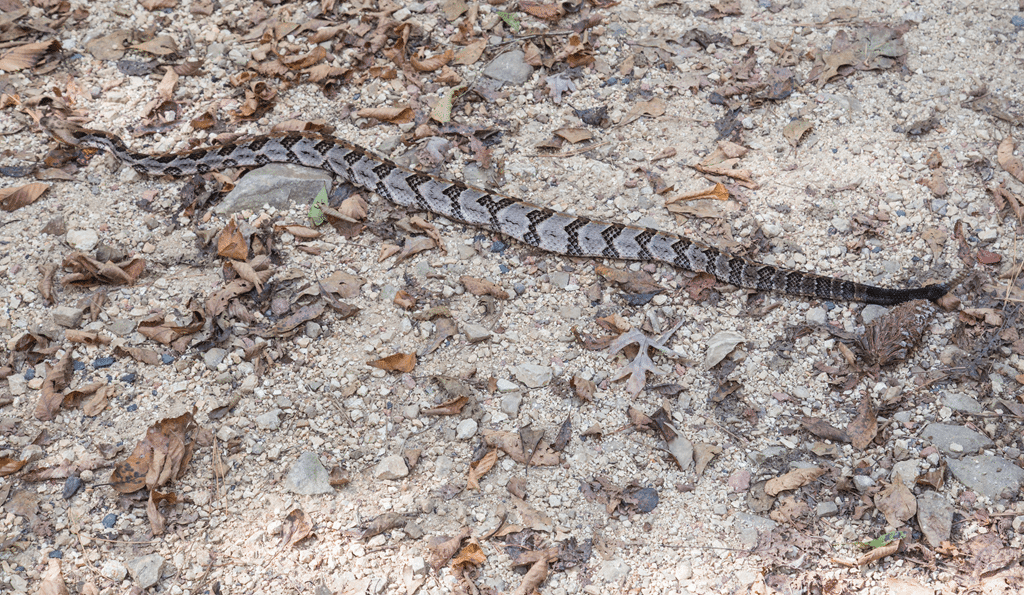 Despite my fascination with snakes, I totally screamed in surprise. He was stretched across 3/4 of the path, he definitely had a rattle, and I had been within 6 inches of stepping on him.

So I did the logical thing. I moved the children to a safe distance and I set about Papparazzi-ing the creature. 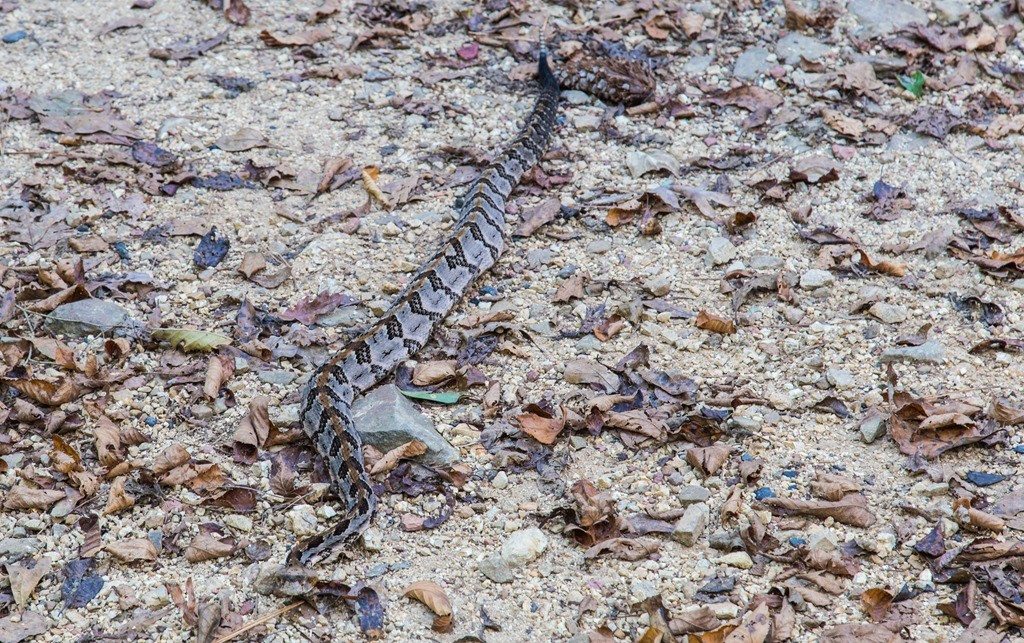 He was just gorgeous – his body was triangular and his stripes were lovely. He was a complete gentleman and never moved, rattled, or hissed.

After recovering from the initial shock, Ali said, “My cage did say it was good for housing snakes, too…”

“So you want the snake?”

But pet type or no, he had been thoughtful enough to park himself on the trail where there was a large natural jut-out on the other side, so there was plenty of room for us to pass without coming too close.

I walked Ali across, but Noah refused.

I carried him by the rattlesnake as they warily stared at each other, and we continued our journey.

The mill was every bit as lovely as I’d remembered it from my childhood. 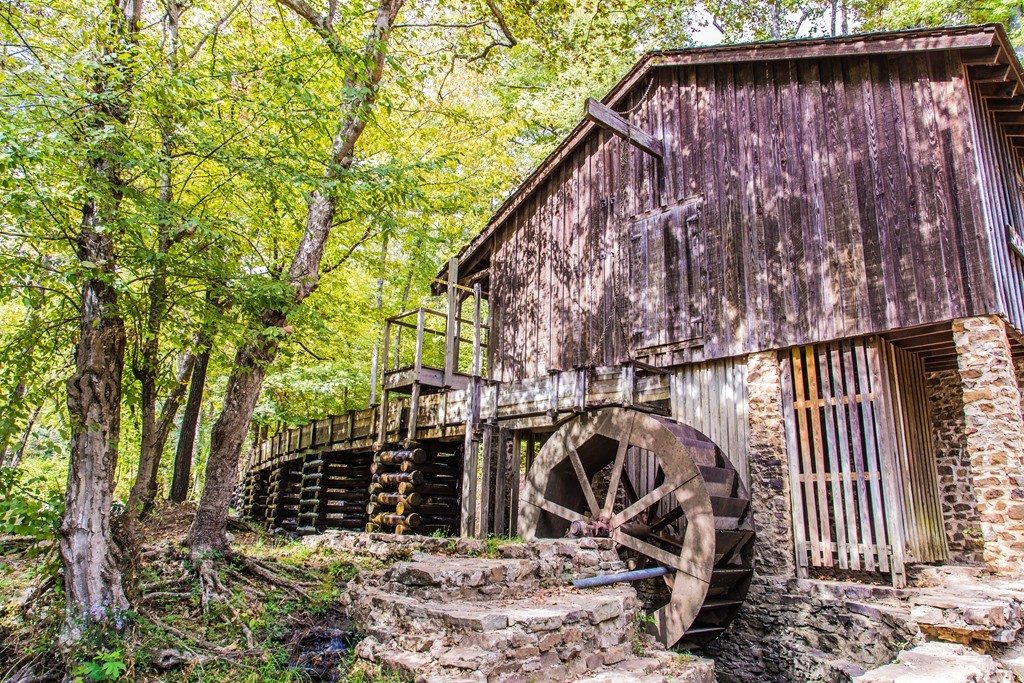 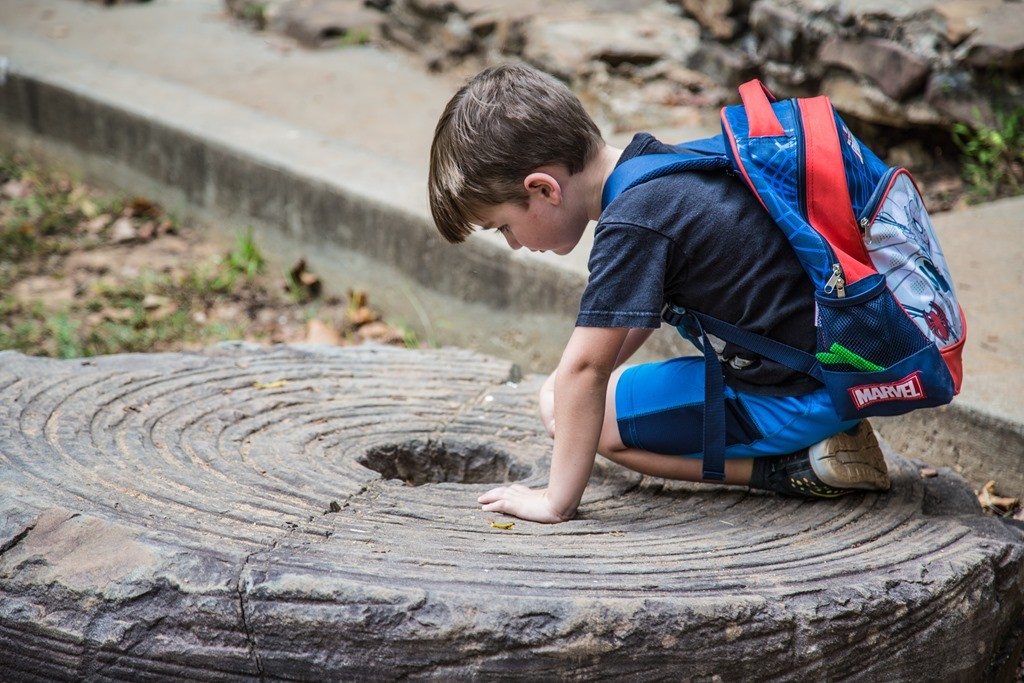 The kids were mesmerized by the dam feeding the water trough that was (theoretically) supposed to move the water wheel, were it not for low water levels and a couple minor leaks. 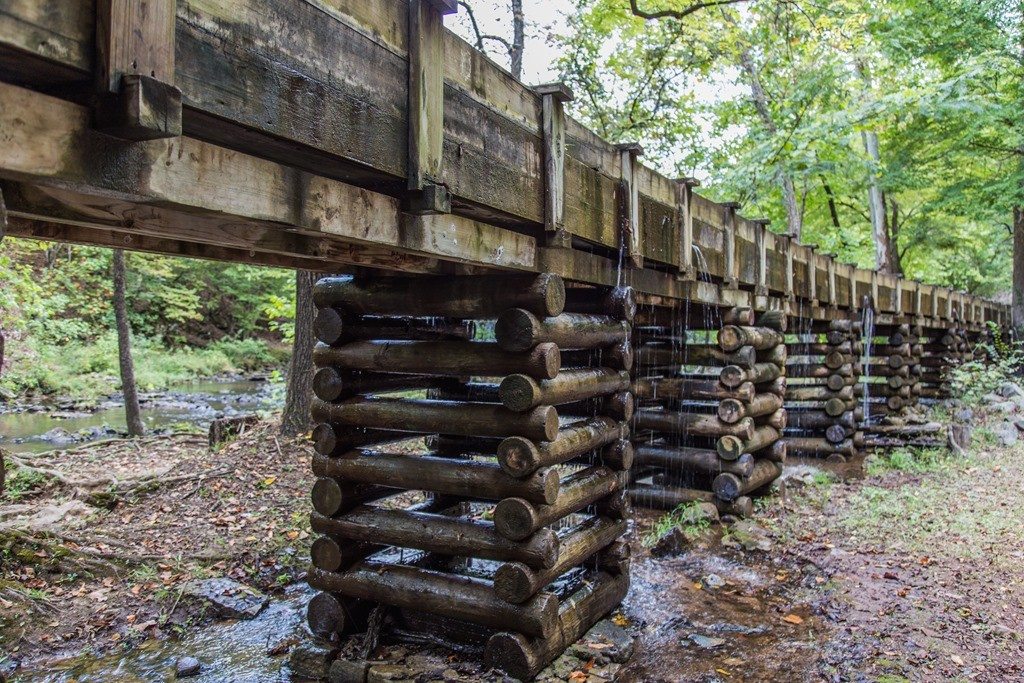 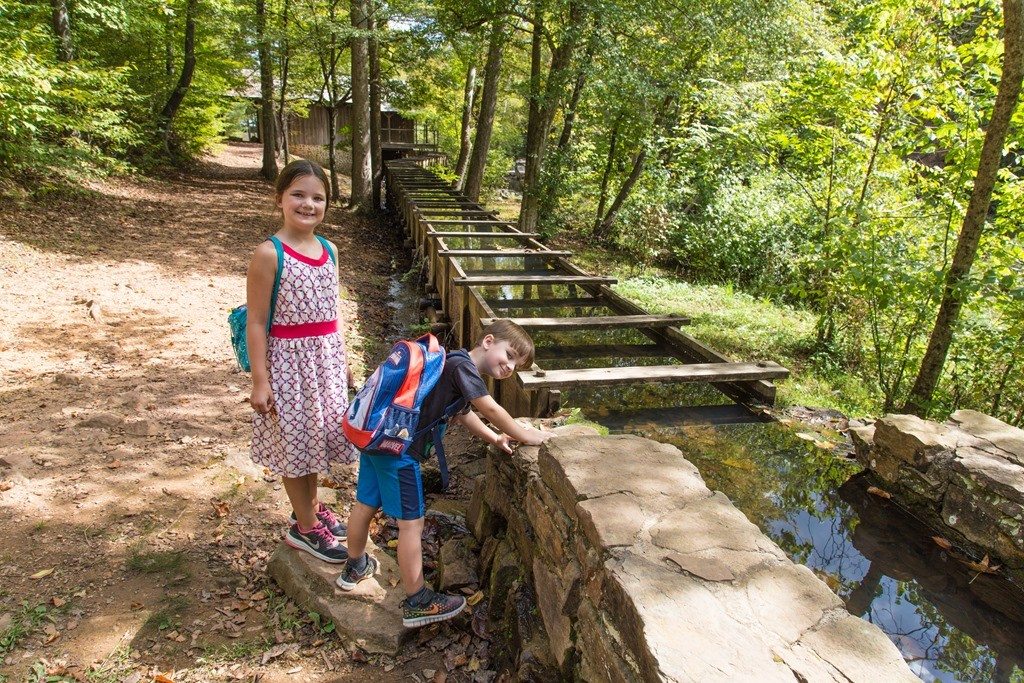 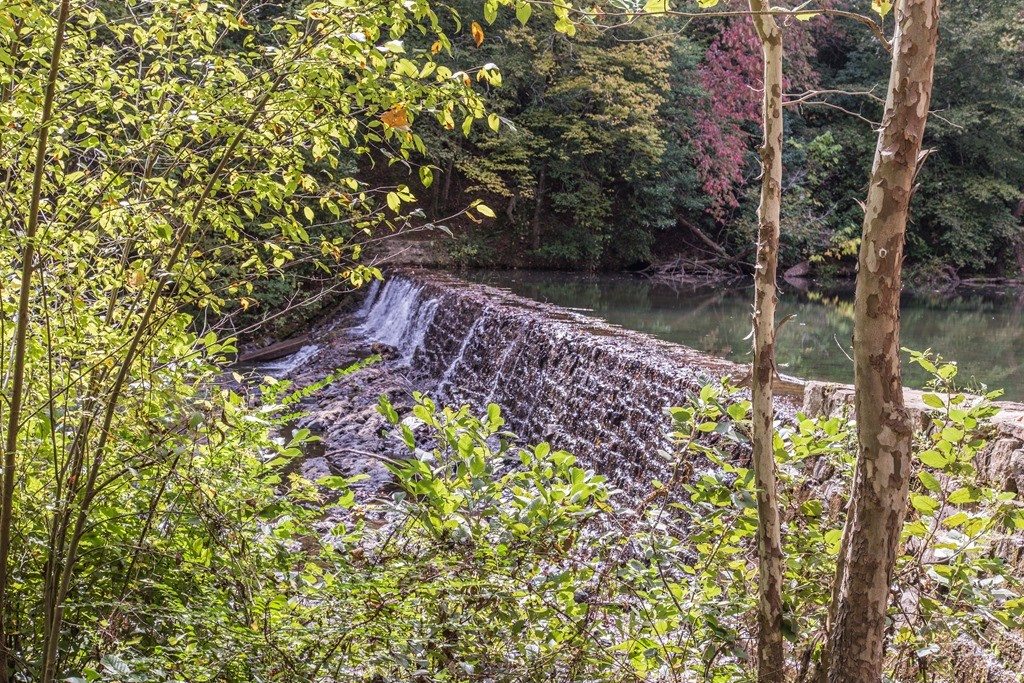 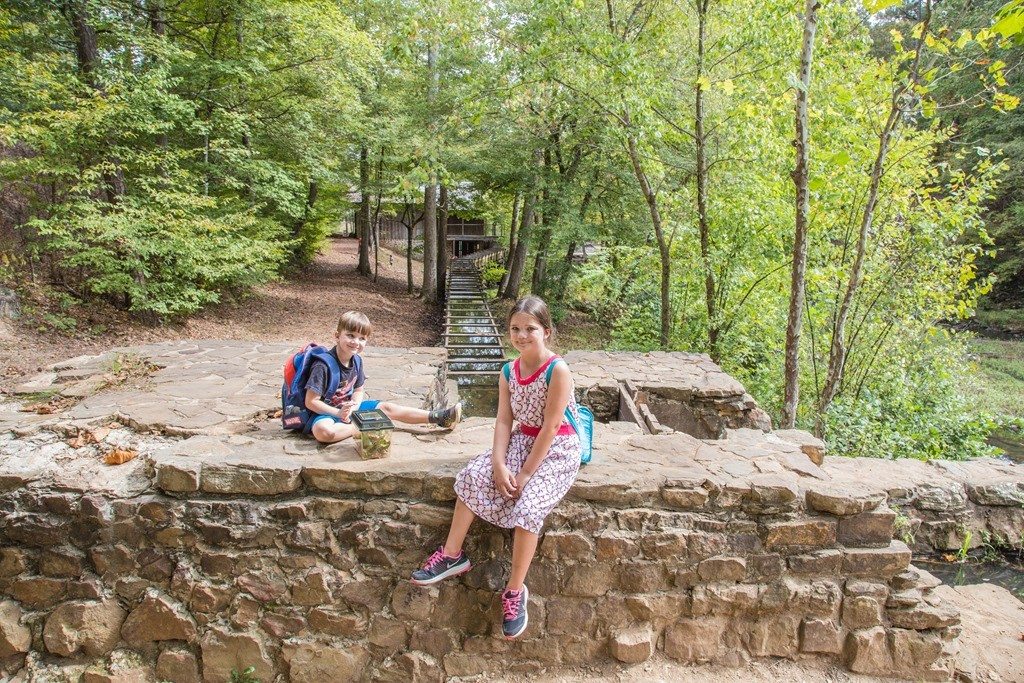 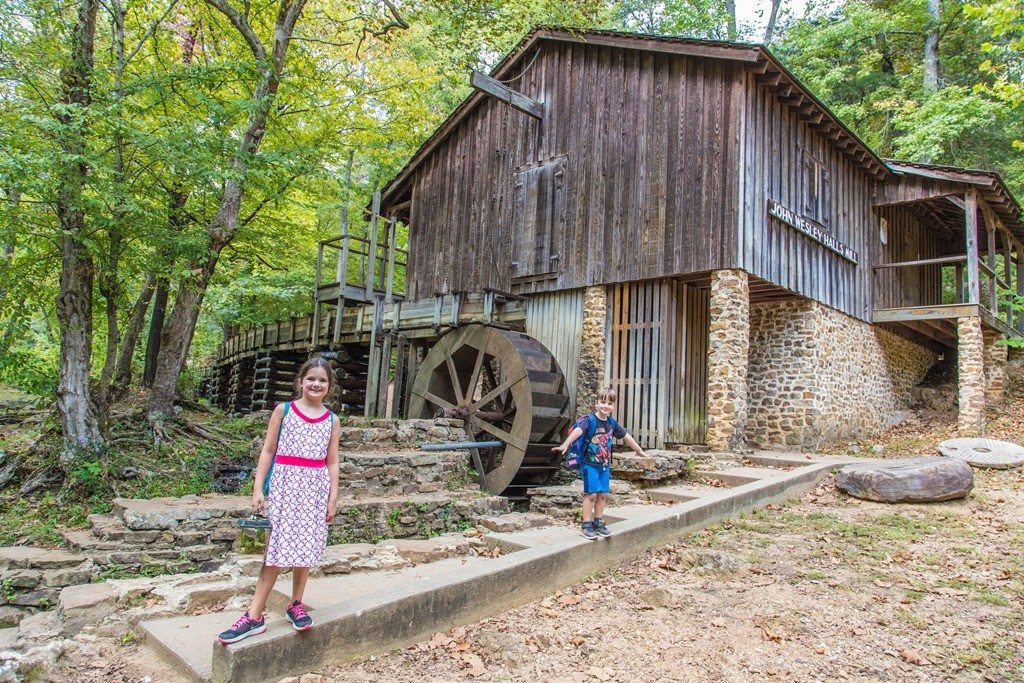 The Tannehill Hike was completed by finding the unbelievably refreshing and always-cold Bubbling Springs which brought relief to our weary feet (and so many memories of my childhood to me), 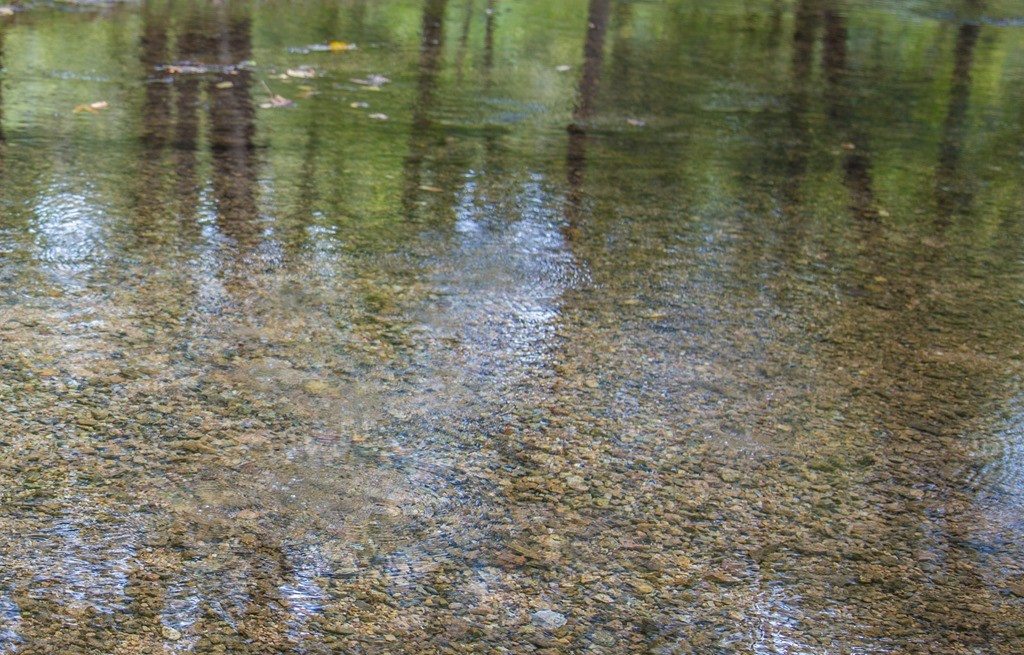 And then a stroll through the campground to see the insane amount of Halloween decorations. 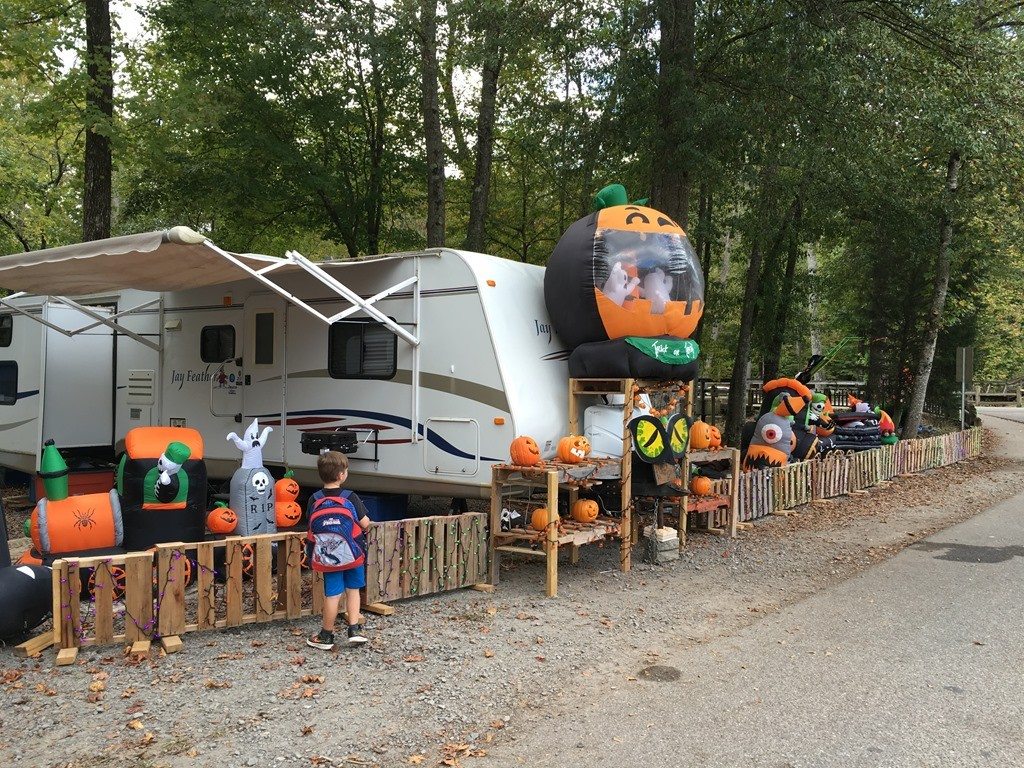 The campground was already full at the beginning of September with Halloweeners, and these people did not skimp on their space usage – and there seemed to be an endless supply of Halloween Tailgaters. If you want to see all the Halloween décor that your heart could ever desire, you must go to Tannehill this month. 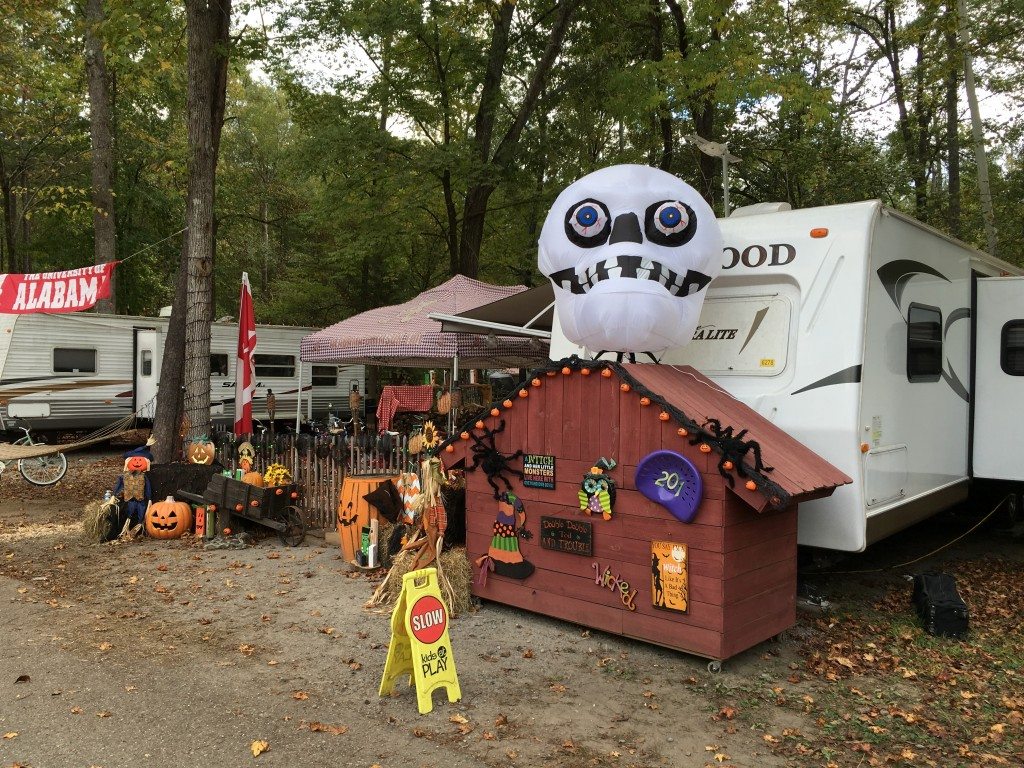 (Warning: Although most of it was fun, there was one camper that had quite the fascination with immeasurably creepy and bloody clown ax murderers. No pictures because it would be more disturbing to sensitive viewers than the rattlesnake I so insensitively showed you.)

On Thursday, we set out for one more hike, as my mania had not yet been satiated. This time the destination was to a new treehouse at Red Mountain Park.

But we made it to the new treehouse, 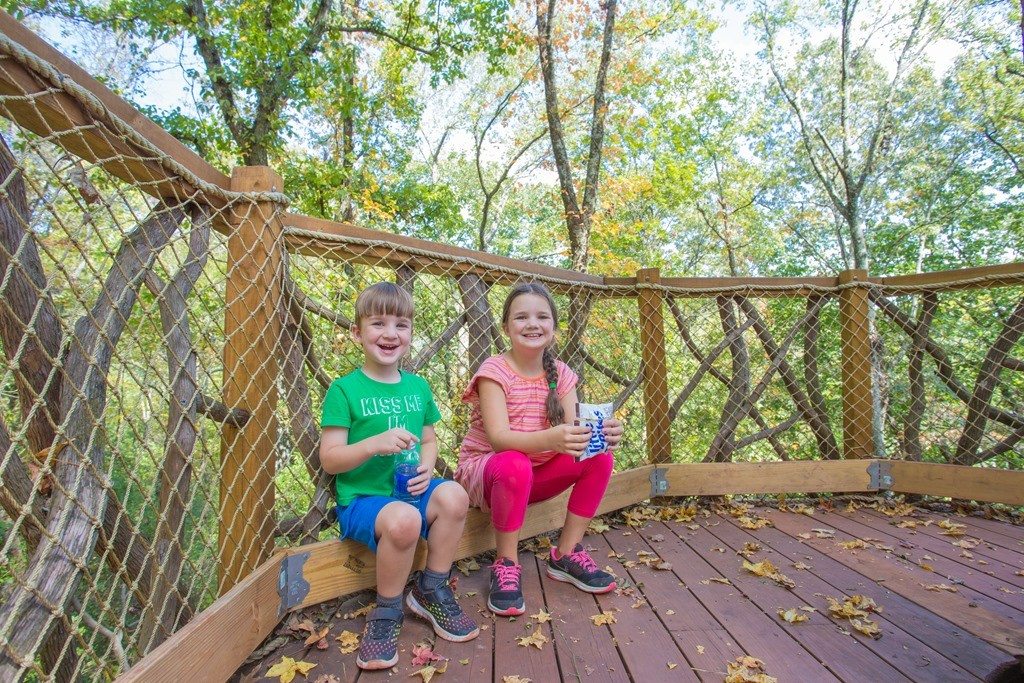 which was situated next to some mining ruins, and the children realized there were antique bits of shiny yellow bricks scattered over the entire area. 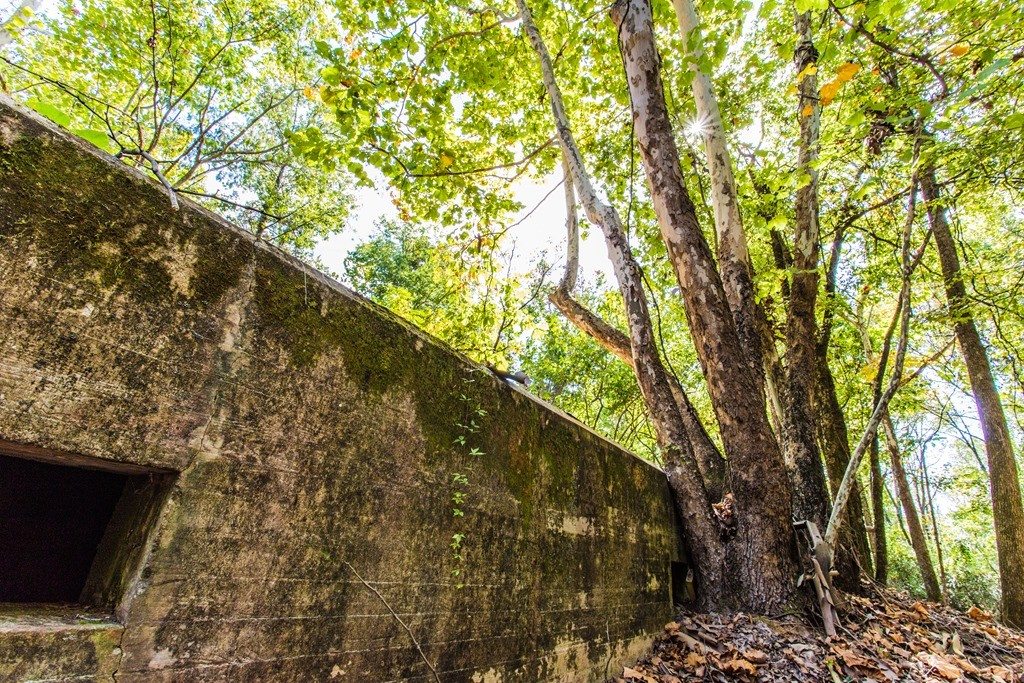 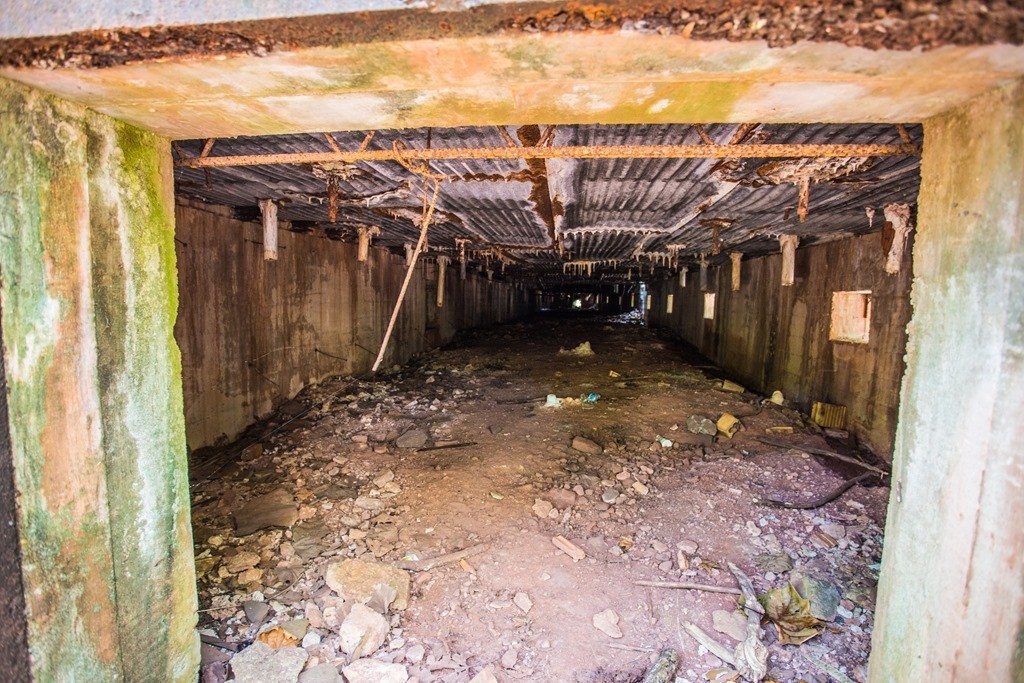 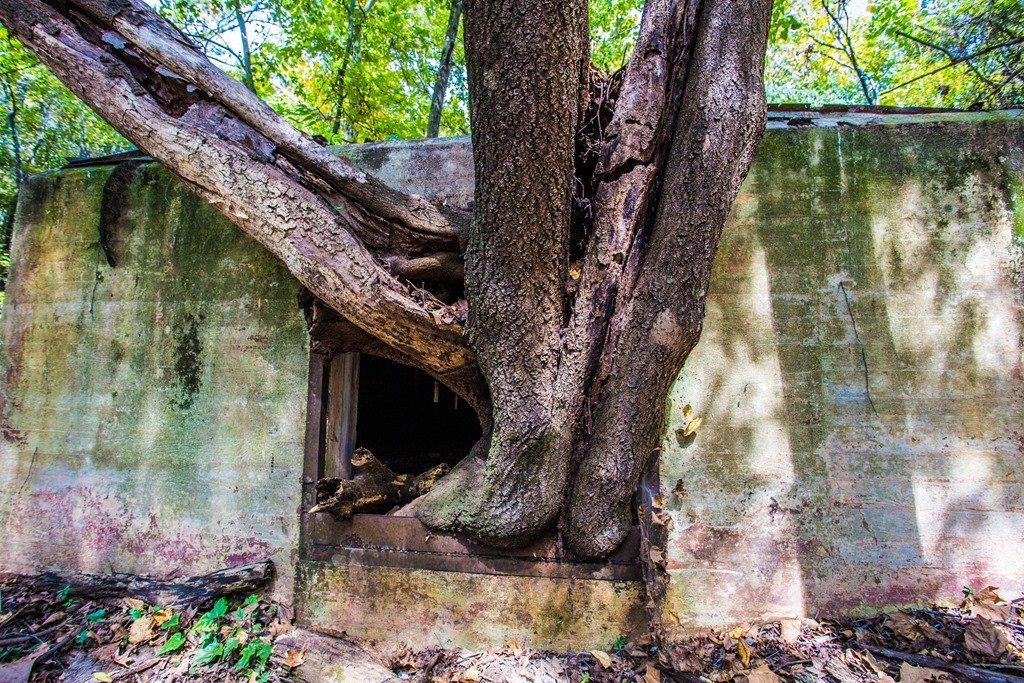 As on our Peavine Falls hike, the way back was significantly less whiny than the way there, except for a trip and fall by Ali, the-child-that-is-so-careful-she-never-bleeds.

(She still references this event often as one of the only times she has ever bled. SHE WAS THREE. How does she remember every detail??)

I messaged Chris dutifully when we got back to the car, as Ali wanted him to be fully aware of her wounds. 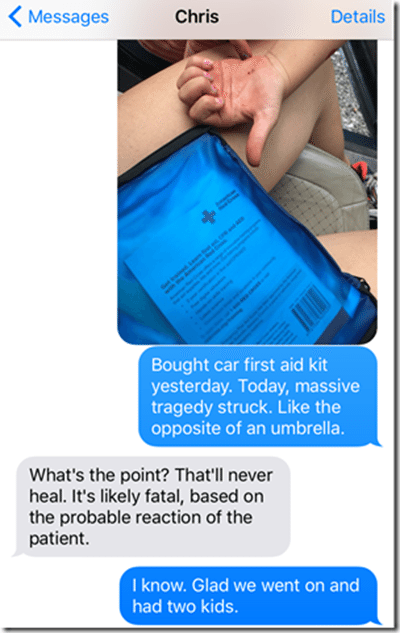 All good parents make fun of their kid’s injuries, right?

As we drove home from that third hike, I began not feeling right. My skin hurt, I had chills, and things just weren’t feeling nice.

Turns out, I had gotten a literal fall fever. Which ended up being full-blown pneumonia.

Perhaps the mixing of three different park’s dust in one’s lungs is medically ill advised. Or maybe it was The Curse of Luna. If so, I deserved it.

Epilogue: I am slowly recovering from my pneumonia, which was incidentally diagnosed on my birthday (Friday) which was also incidentally at least the fourth time I’ve been sick on my birthday. Ali continued her complete geekiness by begging me to read her the histories of Red Mountain and Tannehill’s ironworks ruins. Their stories wove together in a fascinating tale of the origins of Birmingham. Luna Junior is still alive and kicking. Because of course you can’t kill a pest without an ax.