I think I’ve made it through everyone’s questions! If I missed anyone, please let me know.

How do you avoid angering any family with what you write? Although you are one of the most positive people out there. I send emails to a few family members, but have avoided blogging because I don’t want to start a feud by saying anything that could be taken the wrong way and make Thanksgiving uncomfortable. In other words, I may be too snarky :/ How do you navigate around that? Because every family has at least one. Even saying “I had a bad day” will bring out – “well you chose this life”… I’m sure you know the type.

My family is in the above-average grade of reasonableness and lack of offendability. They’re really all great people. That helps a lot. But when I’m writing extensively about anyone other than myself, I always send them the post beforehand (or offer to send it and they decline) so that they can read it and make sure I’m not oversharing or offending. And also, I self-edit A LOT. There are many things I don’t write about because I’m highly paranoid about offending people, or if I do write it and then think there’s a slight possibility that it might offend, it stays in my drafts folder indefinitely.

Subsequently, my drafts folder is FASCINATING.

What are your favorite brands of clothes for running? I’ve been buying Old Navy cause it’s cute and cheap but they’re definitely not the sturdiest.

I buy almost all my running clothes from one of two places: either TJ Maxx or Nordstrom Rack (mostly through their app, Hautelook because it’s cheaper than in-store.) Both have fabulous prices on name brand running gear, so it doesn’t wear out, fits well, and is about as cheap as Old Navy.

Running Shirts: Z by Zella from Rack/HauteLook, New Balance, 90 Degree by Reflex, and Marika from TJ Maxx, and I do have a couple from Old Navy because they’re so long (and therefore cover my butt.) 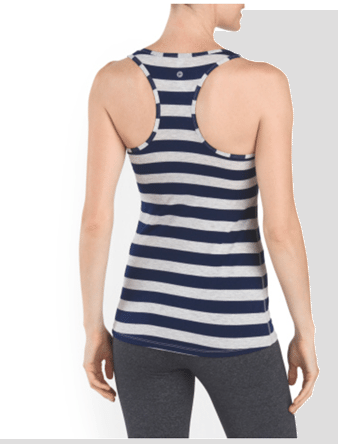 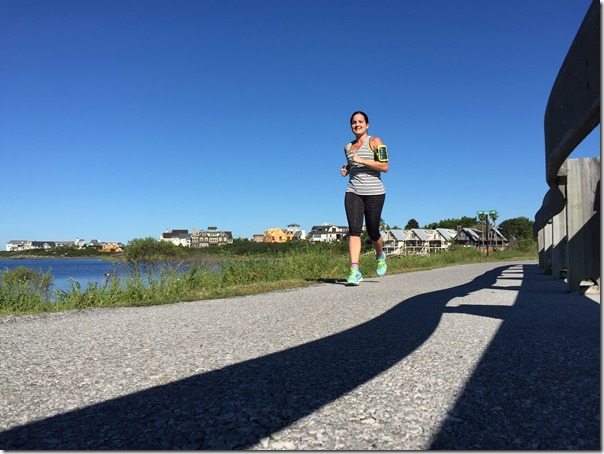 I also own this Z by Zella tank from Hautelook for $12.97 and love it: 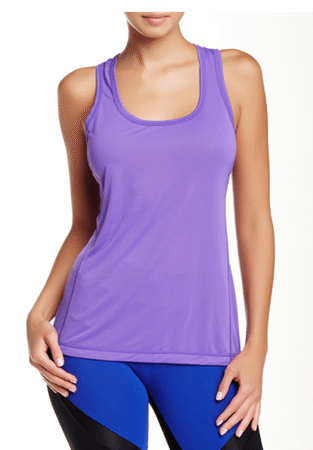 Sports Bras: New Balance from TJ Maxx. I want standard sports bras – no padding, no cups, no tiny spaghetti straps – why is this so hard to find? I have no idea. Unfortunately I can’t find the one I love online to show you.

Leggings: I’m most particular about my running leggings because I want ones that I won’t constantly have to pull up while running, I don’t want cameltoe, and I want extraordinarily thick stitching on the inside seam (because thighs.) When I started buying leggings, I bought mediums, but then I learned that smalls stay up better. So buy a size down. These are my favorite brands: Z by Zella, X by Gottex, and Adidas from HauteLook; and Mondetta, MPG, and Marika from TJ Maxx. 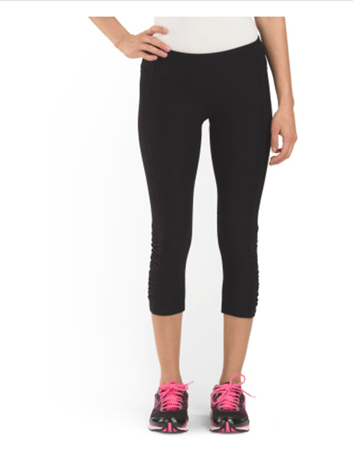 If you want a bit of a pattern (these come in several colors including black), I love these Z by Zella capris: 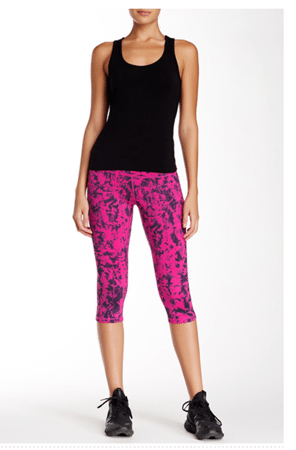 This is a great full-length legging by Marika at HauteLook, but please don’t try to run with your jacket open and no shirt on. 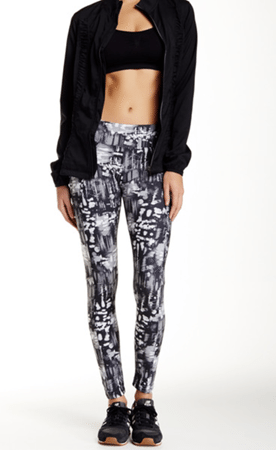 (And here’s a solid black option – it does have a shiny pattern on it to make it a bit more interesting.)

Shoes: So far, I’ve run in Saucony and New Balance.

Socks: Because I’ve had two foot surgeries and a tendon injury, I actually spend more (proportionally) on socks than anything else. I don’t want blisters, I need support for my ankles, and I just don’t like it when my socks move when I run. So I buy compression socks from Amazon – I use the Sockwell quarter socks when it’s not cold: 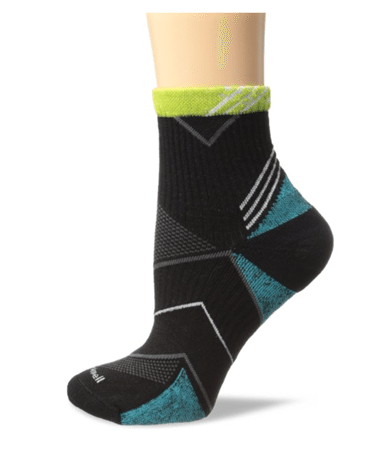 And full length ones when it’s cold (they go under my leggings and make me feel like a superhero.) 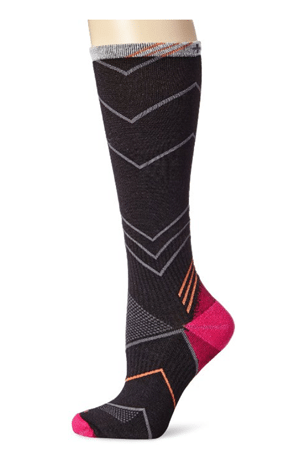 Do you have a belt for carrying water or an iPhone or anything?

I do not carry water. I have an Armpocket armband for my iPhone, and it’s the only one out there that’s sweatproof – I’ve sweat through all the others (and might or might not have ruined an iPhone doing so – running has made me very sweaty.) It’s expensive, but if you want to run with a phone, it is, in my opinion, the only safe way to do so – except for the extremely sketchy fanny pack that Chris uses. 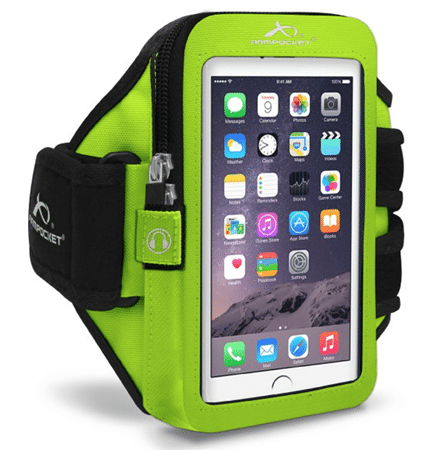 It has room in it for a cased phone, and has pockets for credit cards and a key. I offer one warning, though: since it absorbs all the sweat and doesn’t let it near your phone, it can become very…ripe. So wash it regularly (in the washing machine, no dryer.) But before you wash it, play “smell my arm pocket” with your spouse – it’s a blast.

Dark. And Artisan. I even wrote a guide for it. I’m a chocolate snob. But I did just eat Reese’s Cups from the gas station so I guess my morals are looser than I may claim.

Here’s a universe-question for you…what is up with Sesame Street? We have books where Elmo needs help from Daddy, to make Jello (actually it’s Gel-mo) for Mommy, and other books where he’s off wandering the streets by himself. We have a book where Ernie needs Maria to take him to the store (and he gets lost anyway), but the rest of the time he lives by himself (well, you know…with his…brother?)! Yet another where Big Bird and the rest are playing T-ball, yet they live by themselves too. I think we need an investigation into these discrepancies.

Wow. I have not delved into the continuity issues of Sesame Street because we are not a Sesame Street family – my kids can’t get through half an episode without getting bored. In fact, at this moment, I’m in a hotel with Noah. I flipped through the channels and landed on Sesame Street, and he said “Nah…”

Our major continuity beefs are with Bubble Guppies. They’re underwater – why in the world do they need a boat to cross the lake? They’re ALREADY SWIMMING. Besides the confusion of how there’s a lake underwater. And why did they have to call the fire department to get out of the tree? They could have simply swam out! That show is the most mind-blowingly distracting show ever created – Ali and I are highly disturbed every single episode.

We need food recommendations for inside and/or tailgating outside the stadium on game day.

Well, since I’m basically Arm Candy for Chris on football Saturdays and do nothing whatsoever useful (except every now and then I make crunchy slaw), I’m not really the best person to ask. There’s quite the organized meal-planning Facebook group for our tailgate, and Chris usually cooks some sort of meat for our contribution. My greatest tailgating tip is to pray for God to send you a restaurant owner that wants to tailgate with you – we were highly blessed with Shannon from John’s City Diner and oh-MY-gosh he brings the most glorious food ever concocted.

I would also like to see a graph or two to determine best parks (height of slide, availability of bathrooms, wildlife, and fencing options are good starts).

Good idea! This will have to be a post in itself. I shall begin collecting data.

I know games just started, but it is about time to let us know the boot and short trends for this football season.

I’m working on this. I’ve only been to one game so far, and it takes a few to make this happen.

Finally, please let Noah tell us about how school is going at home this year.

How and how much do you edit your photos for your blog and for Picture Birmingham? I’ve become very disenchanted with and pessimistic about photography/photographers lately because I feel like I can’t trust their pictures to be real. It is so easy to adjust, edit, brighten, etc. that I have begun to dislike and question all photos. Was the sky really that color of blue? Were the greens that lush? Are that kid’s eyes really that shade? Whenever I see a photo with vibrant colors I assume it was doctored in some way. I don’t think I’d mind if it was put up as an artistic interpretation rather than as an accurate representation, but it is so hard to tell.

I absolutely edit nearly all of my photos. However, I believe the reason for editing is to get the photo back to what the naked eye can see. Rarely can a camera capture all of the nuances of a scene upon first shoot – the shadows become too dark, the colors become washed out, the lighting is nearly never able to be caught perfectly – even by the most professionals of professional. Editing is just as much of the process as shooting the photo. Especially when shooting in RAW, which somewhat strips a photo down so that it can be edited to perfection. (I shoot RAW+jpeg, and the jpeg is always significantly more saturated than the RAW – I have to edit the RAW back up to get it where I want it.)

Overall, I believe that editing should be used to get the scene to look as natural as possible. Do I always do this perfectly? Probably not. Do I believe that brightening a photo is wrong? No I do not. My goal is to show off God’s creation in the most beautiful light possible – I don’t want to “fake” anything and certainly don’t try to fake anything, but photography is an art, and I try to walk the line between realism and art very carefully.

Despite doing a Downton Abbey and Big Bang Theory MBTI personality chart, Myers-Briggs IS HARD. So many letters! However, I think I’m an ISTJ or ISTP. I think. Who knows. And I don’t even remember what that means.

Okay – that’s it!! I’ll try to respond to any further or follow-up questions in the comments. I hope this has been enlightening for everyone, or at least that you didn’t quit following me from boredom.

12 thoughts on “All the Answers: The Last Batch.”