Ali asked me to play with her the other day.

I agreed, as I was feeling a moment of Mommy Guilt over the fact that I am not the best playing-Mommy that ever was (actually I’m terrible at just sitting down and playing with my kids – I much prefer cuddling or reading or hiking or exploring.) So I vowed to play whatever she wanted.

She ran off to get set up, and when I entered the room, she announced that we would be playing crafts.

Crafts I can do. How did I know playing could be a potentially therapeutic type of activity? I expected us to be battling through another epically soul-sucking game of Chutes and Ladders. I should play more often! 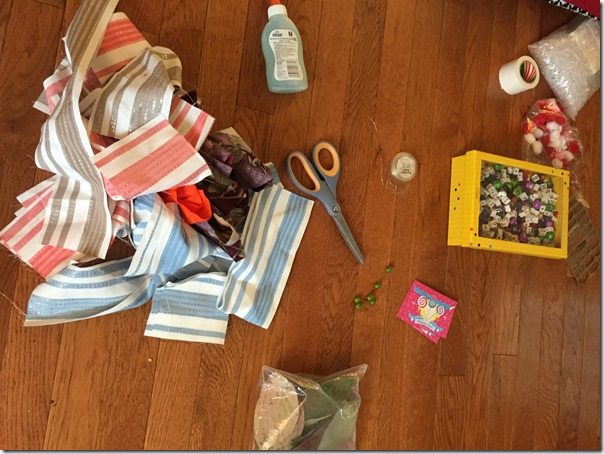 Ali is overrun with craft supplies in need of using, as she discovered a few weeks ago that one of the art galleries I have Picture Birmingham products in, Naked Art Gallery, has a bin of “free art supplies” for the taking. She and Noah have since become that bin’s biggest customers. We had dropped by the day before and they had picked out a load of fabric scraps and other miscellaneous items, such as the ziploc bag full of beer bottle caps and wine corks that I didn’t know they’d snagged until after they had thoroughly handled and sorted each one without washing them first.

(Although now that I’m pondering it, I suppose beer bottle caps aren’t that germy.)

(Except for the ones opened with the consumer’s teeth.)

We started out making a mosaic – I cut the fabric into random chunks, then she glued them onto a piece of paper. 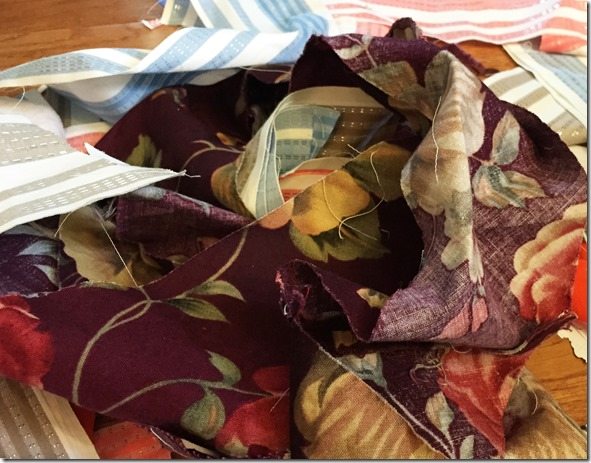 But then – I realized. We could really take this craft up a notch.

Because we do love a good geography game in our house.

One of our favorite things to do at Mexican restaurants is create the United States out of tortilla chips (did you know that tortilla chips almost always break in the shape of one of the fifty states? It’s a true fact), so why couldn’t we do it with fabric swatches? 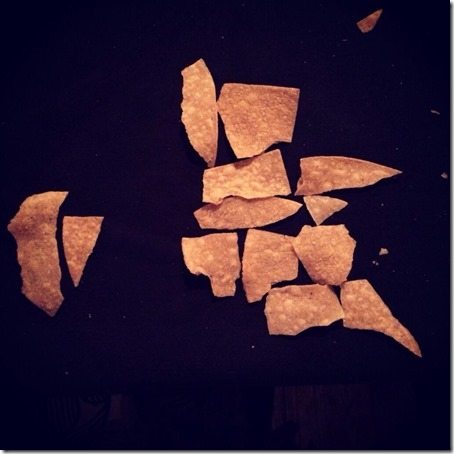 But then I remembered that I had a fantastic pad of blank United States maps (one of the most useful homeschooling extras I’ve ever bought), and realized they’d make a perfect template for my cutting – in case creating random swatches of fabric isn’t quite as serendipitous as breaking tortilla chips. 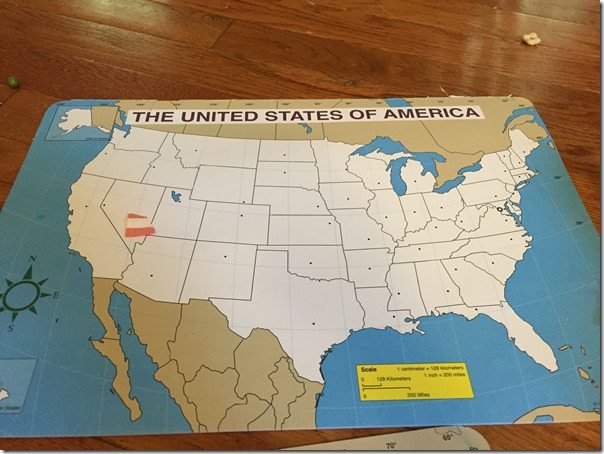 And so I began butchering the nation, one region at a time, and using each state as a pattern to then cut it out of the fabric I had been given. 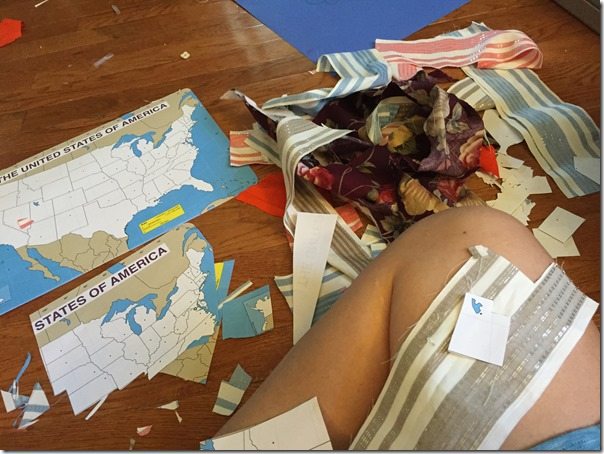 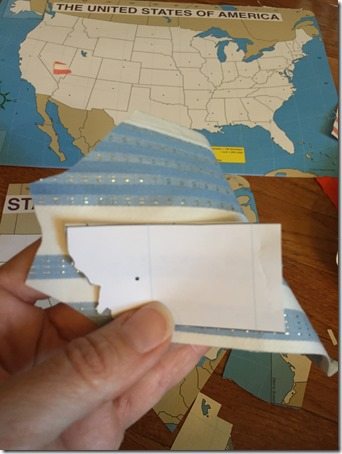 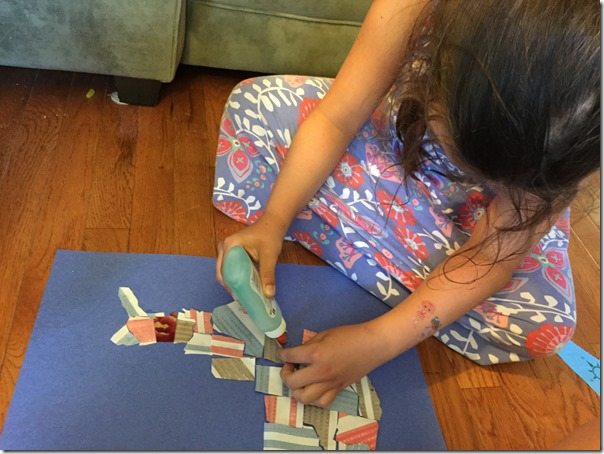 It was perfect for both of us – I find cutting out detailed patterns highly therapeutic, and what kid doesn’t find glue just as pleasurable? Plus, planning out the pattern to not let the same color touch each other too often as well as changing up the direction of the fabric was quite enjoyable for both of us.

We started at Florida, worked our way west, then headed to the midwest, and saved the worst for last – the northeast. 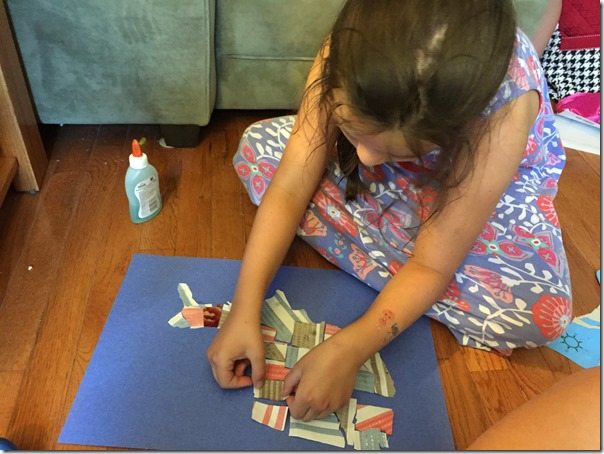 WHY do you guys have to have such ridiculously tiny states?? 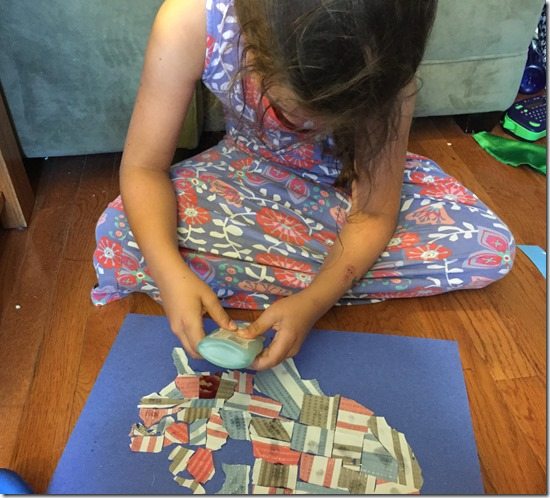 But, after two sessions of cutting and gluing and covering my living room floor with shards of fabric that will be present for at least nine days, we finished our precious map. 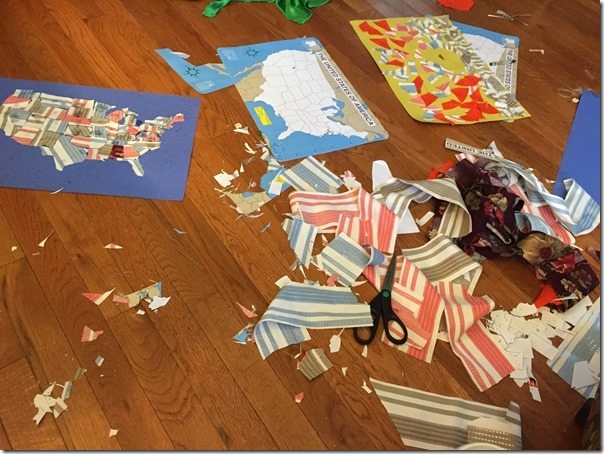 Ali wanted to make Alabama look special, so it was the only state we did in the floral print. Unfortunately, it looks a bit bloody. But it’ll do. 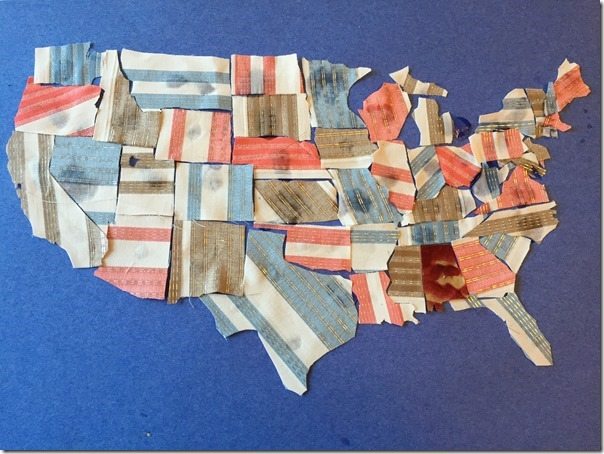 Later, because every craft is just an excuse to use Mod Podge, I brushed over it to give it a nice sheen, and to make sure no states escaped (although New Jersey made a valiant effort.) 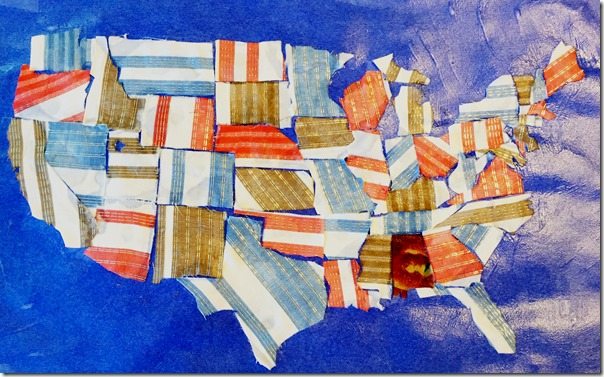 So. If you need a fun craft to discuss geography while getting some therapy in the form of cutting or gluing, this project is for you. And it is five stays in hell less painful than a game of Chutes and Ladders.

16 thoughts on “The Fabric of America.”