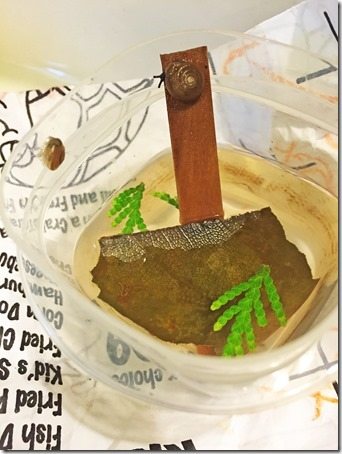 They live in bowl wrapped in a Kid’s Menu. Luxurious by snail standards.

Charles was the second new member of our household (pictured on the stick-like object). He joined our family in the early summer, when he was found washed up on the sidewalk after a recent downpour. The adoption of Charles happened immediately following the sad passing of Slimy the Slug, who had been Ali’s previous love.

(Turns out, grossness isn’t a factor in Ali’s choice of pets – it’s all about speed. As long as a pet is slow enough that he/she can never sneak up on her and surprise her, it’s perfect.)

Slimy the Slug met an untimely death. His autopsy (i.e. casual glance) indicated dehydration and possibly starvation. I’m sure I heard her ask me to please Google what she should feed Slimy. And I’m sure I murmured mm hmm in her general direction. But I may or may not have gotten back to her with the answers before Slimy suffered from the Unfortunate Drying Out Incident.

Let me tell you about the resilience of The Common Alabama Yard Snail.

Ali was determined to take better care of Charles than Slimy, especially in the relationship category. Assuming that Charles’ Love Language was quality time, she carried him around the house with her in his tiny Rubbermaid container that I sincerely hope doesn’t get put back in my cabinet upon his death.

(“No that’s okay, honey – his home can double as his coffin, too. Why don’t you go ahead and bury him in that thing.”)

I often found that little bowl in the bathroom (if left behind after a joint trip because girls always go together and maybe Charles is a girl?), on the porch, in Ali’s bedroom, and, yes, on my kitchen counter.

I have declared more than once that a kitchen is no place for snails, but alas – Charles needs to be stimulated by different environments, you know?

In that vein, Ali began sneaking Charles out of the house – to see the world, to experience life, to sow his tiny little wild snail oats far and wide.

One such outing occurred on an especially hot summer Sunday. She put him and his container (no water included at the time, thank goodness) in her bible bag and took Charles to Sunday School and Kid’s Church.

Snails need The Gospel too, y’all.

She gave a few of her friends peeks at Charles and I’m sure wasn’t at all distracting from The Word being preached.

I, of course, knew none of this until she slipped up and mentioned Charles’ visit to church while we were on our way to lunch.

“Wait. You took your snail to Church??”

“Yes! And I need to take him into lunch, too, so he doesn’t get too hot in the car.”

“I’m pretty sure that restaurants don’t allow snails as patrons. See that sign? No Shirt, No Shoes, No Snails, No Business.”

But as she was peeking into her bible bag to check in on Charles and explain to him the harsh realities of this anti-snail world, she discovered that he was no longer in his Rubbermaid home.

Throughout lunch, she fretted as to the whereabouts of Charles. Had he run away from his home, throwing off the warm, tender care of his eight-year-old master? Had he been stolen by a jealous Churchgoer, who had always dreamed of a snail for himself? Had he gotten lost in the crowd, confused and turned around by the various hallways and vestibules? WHERE WAS CHARLES.

After a long lunch (also known as three and a half lifetimes in Snail Years), we went back to the car. Ali flung her bible bag at me and begged me to dig through it and find Charles.

“I don’t know, honey…even if I do find Charles, he’s been in this bag in the 150 degree car for two hours…he’s most likely dead.”

“Charles isn’t dead! I’m sure of it! Please find him!”

I removed her bible…her various information sheets…her smuggled toys and jewelry. I dumped the dust particles out of the bottom of the bag. And there, the last remaining anything in the corner of her bible bag, was Charles.

His shell felt dry and as if it had been heated in a pizza oven. I saw no slimy traces of his head. I handed him to Ali to put back in what I was sure would be his coffin now, and told her sadly that Charles had died.

“He’s not dead! He just needs some water. He will be fine.”

I contemplated the fact that my daughter was just the type of kid to happily have a dead pet for days or even weeks (they’re even slower when they’re dead), and that The Dearly Departed Charles was most likely in our lives to stay – at least for a while.

We got home and Ali quickly poured some cool water in the bottom of his home, then gave him some shrubbery to eat and a stick to crawl on. Then she left him in the bathroom for some much-needed alone time.

A few hours later, Ali called me into the bathroom.

Charles was happily (can snails be happy?) perched on his stick, antennas alert and looking as if he’d never experienced an Alabama car in the middle of August.

The next day, all of Charles’ dreams came true when, after a summer rainstorm that brings life and happiness, Ali found him his soul mate, Kathleen. Charles and Kathleen plan on raising their family in a cozy little Rubbermaid bowl and hope to travel the world together – because after all, they’re a sturdy breed of snail.

6 thoughts on “Little Ditty about Charles and Kathleen.”