It’s been three weeks since I may or may not have killed my new neighbor’s chicken, so maybe it’s okay to blog about now.

Time heals all wounds and all.

(Except for fatal ones. On poultry.)

Chris and I are very dedicated to neighborliness. In our last neighborhood, we had a lot of those super relationships where we waved and smiled at people every day but never knew their name, and after a certain number of months and then years, it became way too awkward to introduce ourselves. So when we moved to our current neighborhood eight years ago, we made a pact: we would be proactively neighborly from the first day.

(For the first year, we had a legal pad where we kept notes on everyone we met so that we could remember names and facts. Because that’s not creepy at all.)

This summer, we had new neighbors move in across the street. We immediately went over and met them, connected on Facebook, and let them know that we were available if they needed anything.

A few weeks later, Virginia, the new neighbor, told me that they were going on vacation for a week. As our neighborly philosophy dictates, I asked her if there was anything she needed me to do while she was gone.

No problem. I can handle little things or big things. I’m neighborly.

“Can you let my chickens out in the morning? It doesn’t have to be every morning – just when you think about it. I have someone else that will put them up each night and feed them – they’re just happier when they’re free range during the day.”

This seemed an easy request. After all, my Mom has dozens of chickens, providing her (and consequently me) with a regular battery of matter-of-fact tales of their mating rituals and hen-abuse and eggs-gone-awry. In fact, you never know what will lead to a story you don’t want to hear when at my parent’s house. Such as, seeing a nasty looking specimen in her basket of freshly harvested eggs. 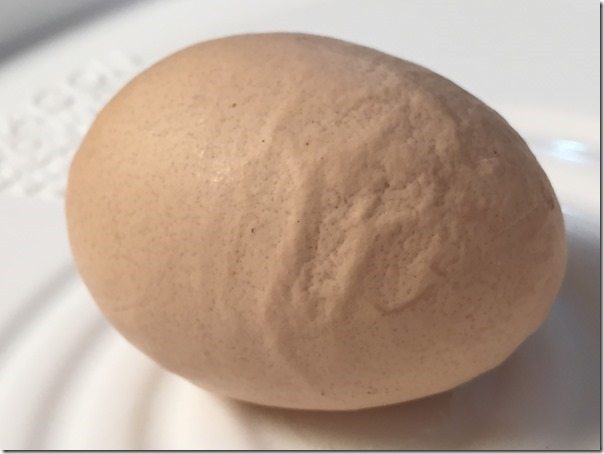 Mom: “Oh nothing. It just came from an older chicken.”

Dad: “Can you imagine how that felt coming out?”

From now on that is how I will picture my own nearly 34 year old eggs – lumpy and covered in large pores – and will continuously weep at the declining of my womanhood.

“….so all you have to do is open their cage and let them out into the fenced-in area.”

I snapped back to reality. My neighbor’s chickens. Of course. NO problem. The kids and I can HANDLE IT. We rock neighborliness.

The next morning, I led my little troupe across the street. The children gleefully attacked their play set while I let the four chickens out and checked their water.

We repeated these steps for the next few days with no incident. I began to get to know the four very differently colored and sized chickens. There was the tiny one – was it even a chicken? And then the brown one, the speckled one, and the black one. The black one was the Mean Girl – every time I opened the coop, she pecked, squawked, and flapped at the other chickens in an attempt to be the first one out of their tiny home.

I pondered her personality further and realized that maybe she was just the Introvert. And if so, I totally understood her need for escape.

On Friday, I was leaving for the weekend and forgot to let the chickens out. I remembered later in the day, but didn’t worry too much about it, since Virginia had said to only do it when I thought about it. I was gone all day Saturday to the lake with some other moms, and I meant to ask Chris to let the chickens out while I was gone, but in the process of relaxing completely, it again slipped my mind.

Because the lake is where neighborliness goes to die.

On Sunday morning, I got a text from Virginia.

“Good morning. Are y’all at home?”

“No…I’m at the lake. But Chris is home – what do you need? I’m so sorry I forgot to let the chickens out!”

“That’s totally fine! It was just if it was convenient for you. But yes, if he is home and wouldn’t mind would you ask him to go open the coop? The girl that is taking care of them said that the black one seemed to not be able to get out of the coop yesterday and I don’t know if she is hurt or just being grumpy.”

I texted Chris and asked him to go let the chickens out, and promised Virginia that I would also go check on them when I got home that afternoon. Chris texted back that they all came running out, so I let Virginia know, and she was quite relieved to hear that nothing was amiss in the coop.

When I arrived home, I walked across the street immediately. As I strolled up to the fence, I saw three of the chickens at the far end, all pecking and socializing.

Which was the point that I realized I had not told Chris how many chickens should have run out of the coop.

That probably would have been useful information.

I searched the yard. The black chicken did not appear to be in attendance.

Not good. This is not good. No good at all.

With much dread, I bent over and peeked into the coop.

And there she was. On her side.

My Poultry CPR skills were not going to help this situation at all.

What am I going to say?! A chicken just died on my watch!!

Not wanting to ruin some beautiful moment in my neighbor’s beach vacation, I texted her rather vaguely…

And then I went back across the street to get a garbage bag. I mean, I couldn’t leave her there…dead…in the coop…right next to the food. Maybe the other chickens were traumatized by the death and that’s why they were in the other end of the yard.

I fretted to myself how the chicken might have died and if it could be my fault. This didn’t fall into our neighborliness philosophy at all.

As I walked into my house, Virginia texted me – she was ready to hear the news, whether injured or fatal. I texted that the chicken was indeed dead, and that I would take care of it.

(I’m pretty sure that texting pet death announcements is the bottom rung on the neighborliness ladder.)

Chris instructed me to double bag my hands with grocery bags and double bag the chicken in two garbage bags so that no neighborhood wildlife would be tempted to retrieve a snack out of our garbage can, and so that I wouldn’t come down with some sort of Dead Poultry Disease.

I headed back, covered in plastic and carrying even more plastic, ready to perform the most environmentally unfriendly burial process in the history of chickenhood.

The other three chickens were back in the coop, pecking away at the food and unceremoniously stepping on their dead friend.

So they weren’t traumatized. And were more suspicious than ever.

I reached in and picked up the dead chicken, feeling the talons claw me accusingly through the bag. I dumped her in the trash bag, tied her up, tied her up again, and put her in our trash can on the way back home.

I felt my pocket buzz with a text, but there was no way I was touching my phone until I washed my hands, double bagged or not.

As I was standing at the sink, my phone started ringing. I quickly dried, glanced at the text that was begging me not to worry about the dead chicken, and then answered Virginia’s phone call.

“Please don’t pick up the dead chicken! I will get someone else to take care of it! I’m so sorry you had to come home from the lake to that!”

I told her I’d already done it, and apologized for the bad news on her trip. She apologized that I had handled a dead chicken. I assured her that I wasn’t squeamish, and I was much more worried that I had been a factor in the death. She said she was sure I wasn’t – but did ask me to check with my Mom as to what she needed to do, if anything, for the other chickens, since we didn’t know the cause of death.

I called my Mom and told her the whole story. After assuring me that she didn’t think my misconduct had led to the death (most likely, she stressed), she said,

“Well. I think the best thing to do would be to put the black chicken in your freezer until Virginia gets back from the beach so that she can take the chicken to the department of health to get tested for diseases.”

In one simple suggestion, my Mother managed to find the limit to both my neighborliness and my squeamishness.

“I am not putting a dead and possibly diseased chicken in my freezer, Mom. How about if she has another chicken die, she can take that one to the department of health?”

Still feeling slightly guilty about The Great Chicken Death, I texted my friends that had been at the lake with me to update them. They texted back with much needed doses of encouragement and advice. 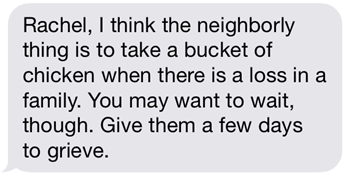 Advice which I have not, as of yet, taken.

18 thoughts on “On Neighborliness: A Cautionary Tale.”