Our summer thus far has been the most fascinating family paradox. While Chris and I have been wrestling with it in a most epic fashion, the kids have literally had The Best Summer Of Their Lives.

But you get the point. Things have been solidly going their way – summer camps and pool days and being on billboards and visiting TV stations and waterslides. They’ve been very aware of their fortunes and fairly thankful for them, as kids go. At least once a day, Ali has reminded me that “This is THE BEST SUMMER EVER!!!!”, which has helped me find solace in her exuberance…and prove that summers truly are for kids. 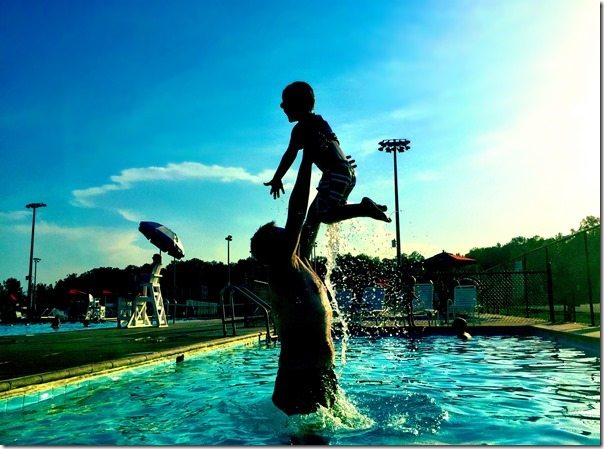 As such, Noah had yet another fantastic summer surprise last week.

It never hurts to have dreams. To be a person with vision. And to communicate that vision clearly to the people around you.

Especially if you’re four and endearing.

A few weeks ago, I discovered The Ideal Bribe to get Noah to be the perfect four-year-old that has been in my personal dreams – and that bribe was a favorite shirt from his favorite store, Alabama Outdoors. 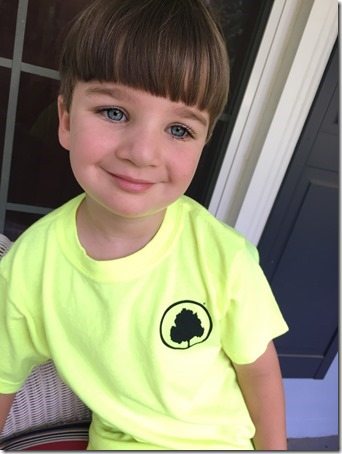 But in that process, Noah expressed his vision for how things should be.

He needed the Big Tree on the front of the shirt.

I mean – if that tree is a beacon of everything you love, then you want to be able to see that tree, blown up, as big as your chest, without having to screw your head around backwards. A completely reasonable observation. 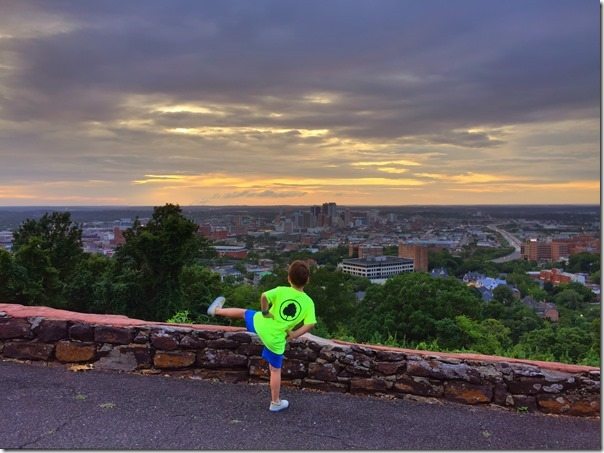 I told you the shirt was bright. I’m pretty sure the whole city can see him.

Alabama Outdoors took note of Noah’s vision, and Tyler and Evan specially designed and printed just such a T-Shirt for him, even in his favorite colors.

His Big Tree on Front bliss was palpable. 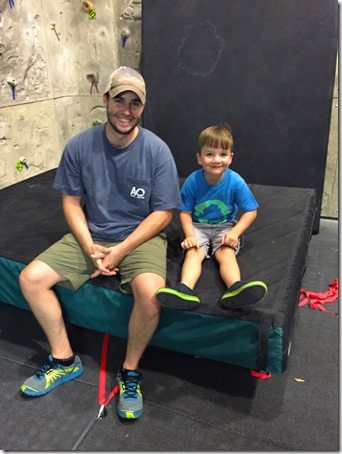 This made for a very smug four-year-old. One that will probably begin to have many more visions for the way things should be.

But the question that Noah hadn’t considered was: what do you put on the back of a shirt when you move the big tree to the front? 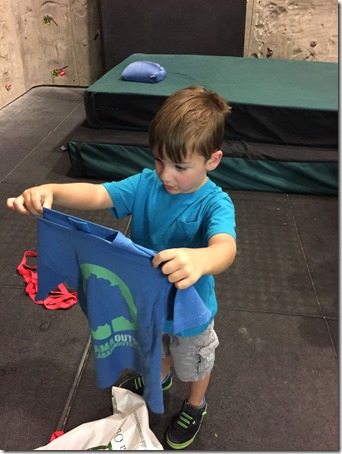 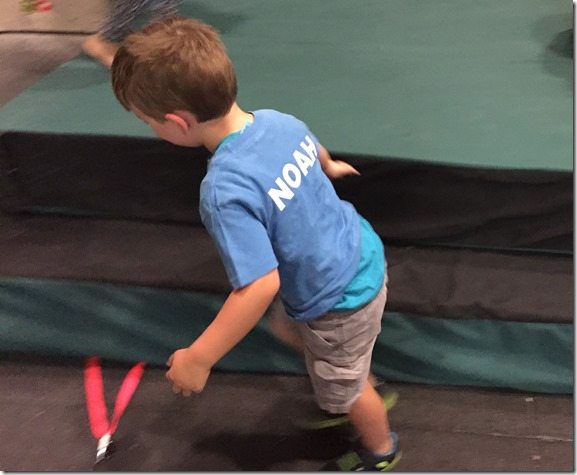 I’m pretty sure this makes Noah The Official Alabama Outdoors Mascot. Or an Indentured Future Employee. One or the other.

As a bonus, Noah got a lesson in exactly how rock climbing works, including adding new rocks to the wall, 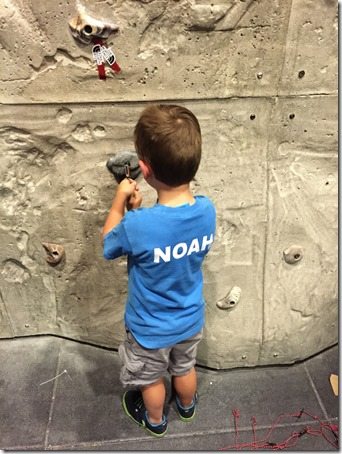 and learning how to belay, using The Lovely Silver Lady. 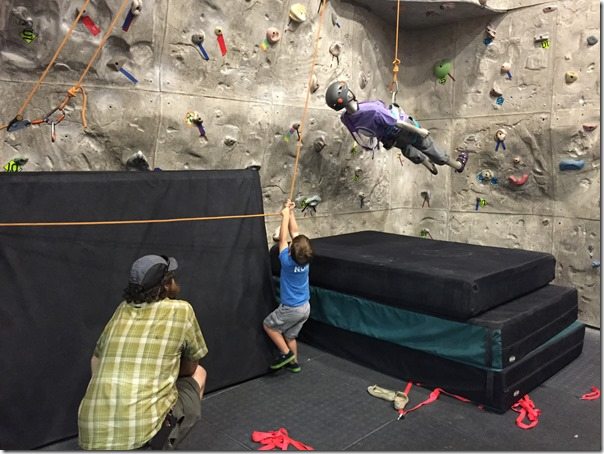 When Tyler brought Silver Lady over for the demonstration, Noah immediately asked, “Did you stuff her after she died?”

“No – we stuffed her before she died.”

“No – she died but we didn’t bother stuffing her.”

“No – her skin tone is naturally that lovely matte silver.”

But if she wasn’t dead before, she was certainly dead after Noah finished with her. 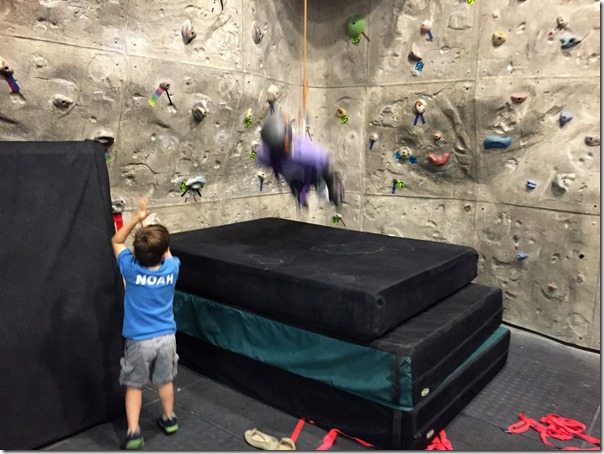 After which he laughed mightily at her ungraceful descent. As one does when one is having The Best Summer Ever. 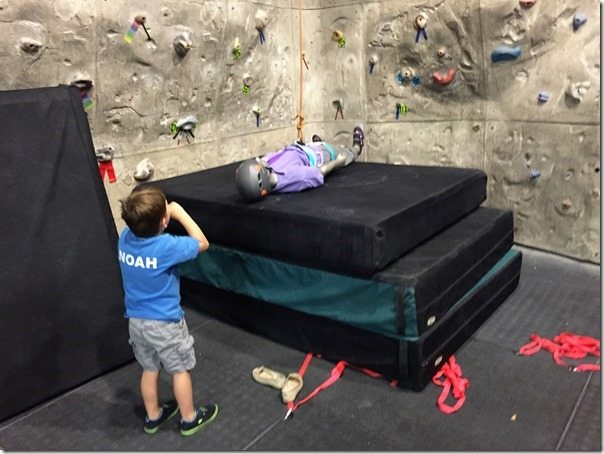 That evening, Noah was sitting on our front porch admiring his shirt, then trying to screw his head around to see the back.

“You know what? NOW what I want is a shirt that says ‘Noah’ on the front.”

And this is why, along with teaching our kids to dream big, we must also teach them other important philosophical concepts, such as this one.

Even in The Best Summer Ever, you can’t always get what you want. But if you’re a kid, you get pretty dang close.

3 thoughts on “Summers are For Kids.”