In April, we experienced some pretty strong and unexpected straight-line winds in our neighborhood. Ali and I actually saw the storm in all its intensity, which was over by the time we ran down to the basement. But the memory has stuck with Ali. 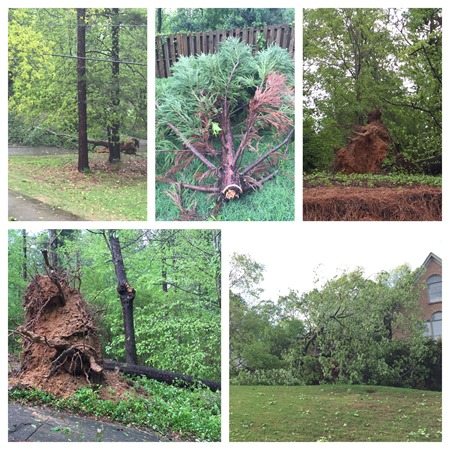 She’s an unemotional and severely logical kid, which is extraordinarily nice for an eight-year-old girl – the drama in our house comes from her little brother, to which she rolls her eyes at his unnecessary emotions.

The problem with logical people is that when they logically convince themselves that they should be afraid, that fear is extremely well-rooted and difficult to reason away.

After seeing the storm and resulting neighborhood damage, she paid close attention to the conversations surrounding it. And she didn’t forget that we talked about the fact that there were no NWS watches or warnings for our area. Nor did she forget the story that one of our neighbors told about driving home (in the sunshine), unaware of the microscopic storm’s approach, reaching our neighborhood at the exact wrong moment, and almost getting hit by a falling tree as they were driving up our street.

As such, Ali’s fear of storms, which was previously nonexistent, has been growing every time it rains. And growing exponentially every time she sees lightning or hears thunder. Or a dump truck that sounds like thunder. Or a headlight that looks like lightning.

Alabama is a very thunderstorm-prone place (I hear that not all states are like that), especially in the summer, so Ali has had no chance to escape her fears.

A couple of weeks ago, we reached a point where I realized that her fear problem was getting out of hand. We had a very loud morning storm – the kind where the thunder sounds nearly continuous. She ran into my room and clung to me, trembling and crying until the storm passed. No matter how much logic I presented, she presented her own logic back to me.

“But that other storm had no watches and warnings…”

And I realized it was time for some advice.

So I emailed our favorite meteorologist, James Spann (who is also largely responsible for the crazy idea that I had to start Picture Birmingham), and asked for wisdom. After all, he regularly teaches kids at church and schools – he should have, at some point, run into a kid or two that had a fear of storms, right?

He replied and said that talking to kids about storm fears was his specialty, and to bring her to the TV station to have a chat.

I told Ali our plans, and she was immediately relieved. She’s met Mr. Spann a few times and just knew he could help her. She wrote him a note stating her confidence in him, 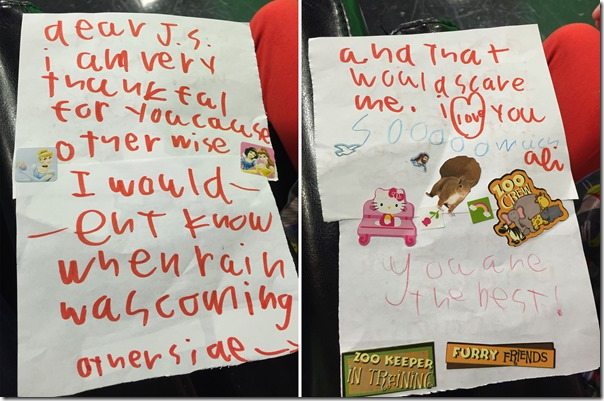 and last Friday afternoon, we took her to ABC 33/40 for a session of Meteorological Counseling. 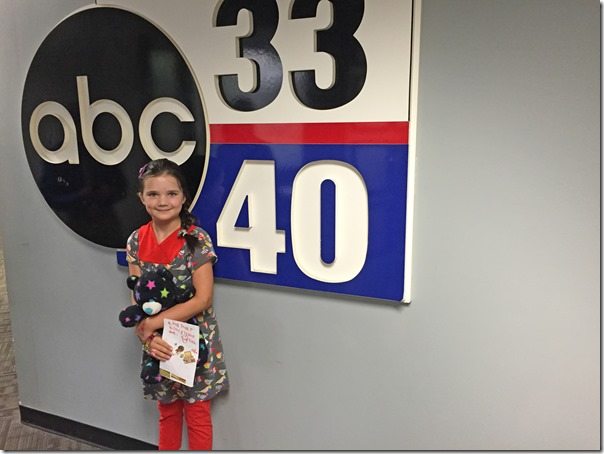 We didn’t realize we’d get a bonus tour, too, but we were met by one of the other Meteorologists, Meaghan Thomas, who took us through the newsroom, the sports department, and then to the control rooms, explaining what everyone did and how they did it. 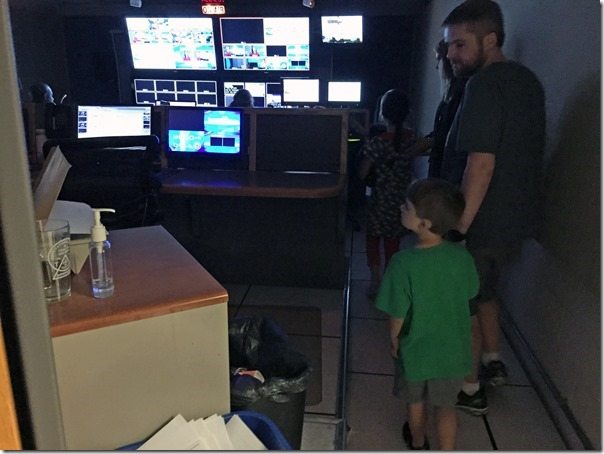 …which, of course, meant that this day totally went on my summer school spreadsheet to count toward next school year. 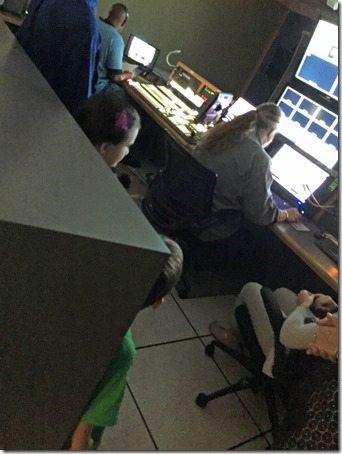 After that, Meaghan led us to the studio, where they were currently filming the news, and told us to be very, very quiet. 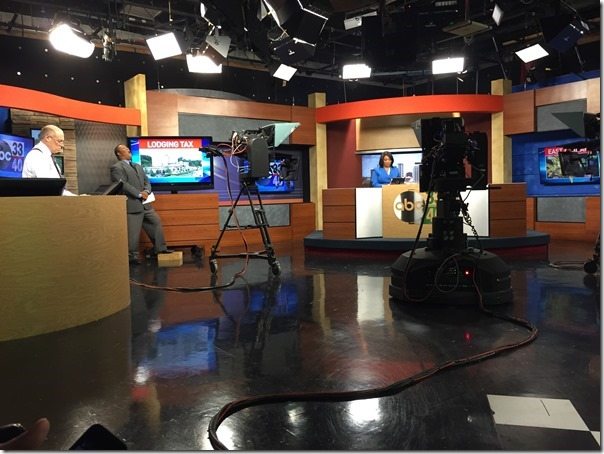 I had not prepared myself or Noah for newsroom-quietness and they didn’t have any duct tape available to fix this lack of preparation, so I feared very much what was about to happen. I didn’t want to get those awkward texts from friends saying “I just heard a kid that sounded just like Noah in the background of the news loudly saying that James Spann was wearing tennishoes. Weird huh?”

But I couldn’t back down now. I simply had to pray for a miracle and for the immediate maturing of my son.

And also squeeze him very close to my chest to compress his lung capacity. 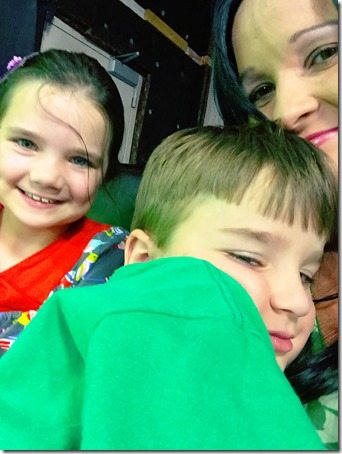 While amusing his sister with selfies. 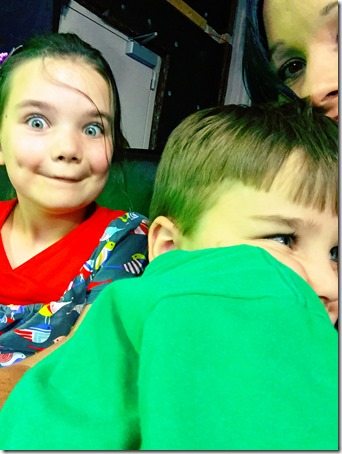 God answered my prayers and Noah did surprisingly well, considering that we watched the news for about 45 minutes. The commercial breaks were an opportunity for him to release his pent-up noise requirements, and they were the most fun part of our visit, as well. There were “Anchorman” references and an unnamed male anchor tripping and falling off the set…entertainment abounded for everyone. 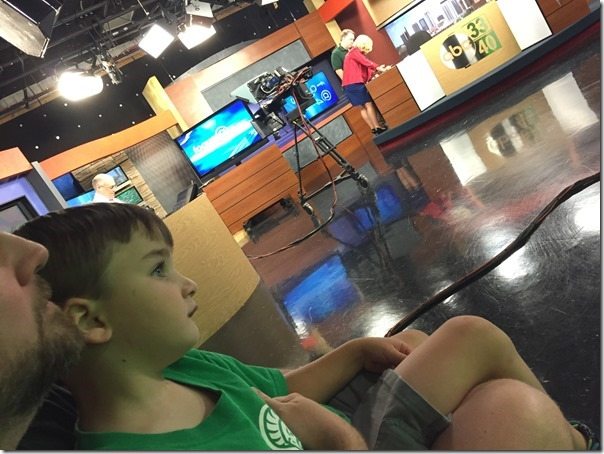 Noah also enjoyed watching the robot cameras move around the studio, and Chris kept pictures of cars up on his phone for pinch-zooming anytime Noah began to falter in his forced-resolve of silence. 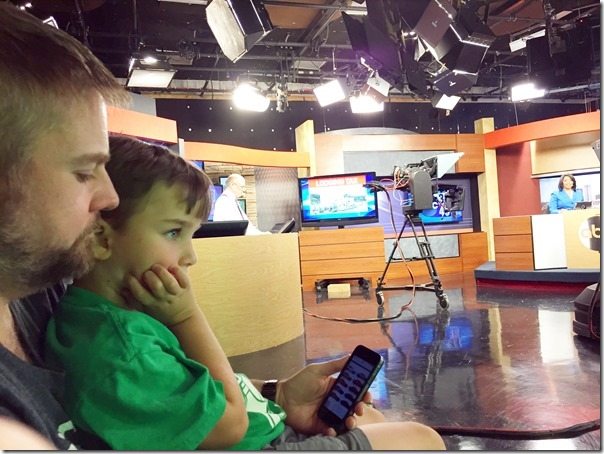 Ali, however, was completely plugged in.

She gasped at the news story about shark attacks, got wide-eyed at the one about the alligator attack, and looked horrified when they shared the disturbing new trend of cell phone cases shaped like handguns.

And, as every kid should be, she was fascinated by the green screen. 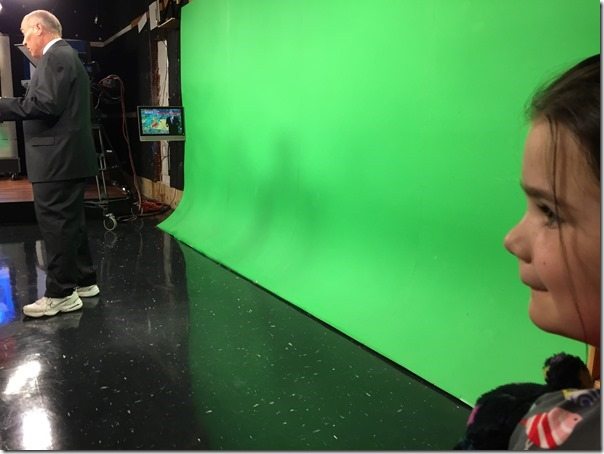 After the news, Mr. Spann brought over a chair and had a chat with Ali. He gave her statistics to logically convince her that her fears were unnecessary, explained that she was safe from lightning as long as she was indoors, and had her saying “Storms are….good…kinda…” by the end of the talk.

After they finished chatting, we got a picture together in the best lighting on the planet – if I could live under those studio lights I am convinced that I would feel a decade younger. 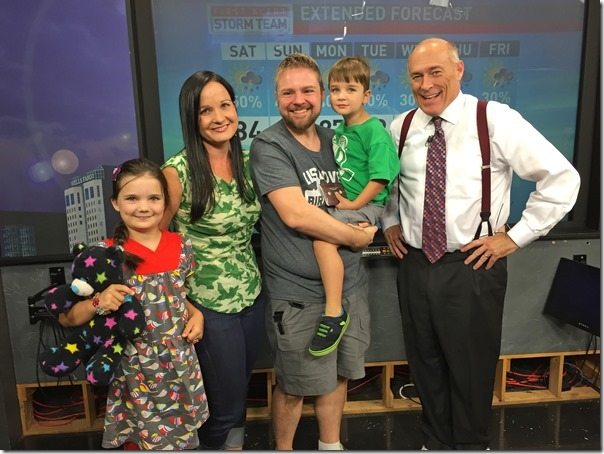 Ali was as pleased with herself as she looks in that picture. With new resolve, we left the studio, ready to tackle the next storm.

A news station with benefits – who doesn’t need that?

Ali spent all evening talking herself through everything they’d discussed, repeating her logic over and over at dinner, and assuring us (and mostly herself) that there was nothing to be afraid of, just like Mr. Spann told her. And her new resolve lasted forever, and we all lived happily ever after.

…until 3:30am, when the next thunderstorm arrived.

But her reaction was a little less fearful than last time, and dump trucks have ceased freaking her out. So progress has been made.

11 thoughts on “On Fighting Weather Fears.”