On our last few hotel stays, Chris and I have discovered a magical commodity that hotels sometimes offer: fruit infused water.

Displayed beautifully in a large dispenser with multi-colored fruits, three recent hotels have had it in the lobby, with those lovely little clear plastic cups that make everything taste better.

One hotel even made with cantaloupe and cucumber. The fact that Chris raved so magnificently about this concoction was even more ridiculous – he’s spent his entire life disgusted by even the smell of cantaloupe and avoiding anything that had too “cucumbery” of an essence.

But yet. When combined and allowed to let water seep through its veins and then wet his parched throat after a long run, it was as if he had hiked across Alaska and found the Fountain of Life.

Speaking of which, all three times we’ve found this wonder happened to be directly after a long, hot run, which may have interfered with our objectivity with regards to the wonders of infused water. Because we both stood in the lobby and gushed over it being the BEST THING WE HAD EVER TASTED.

Sweating, me in leggings as pants, once even in matching running shirts, we felt more like Todd and Margo than we ever, EVER wanted to experience.

“Who drank the last of the infused water??” 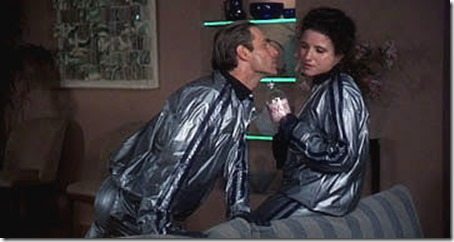 But regardless of the obnoxious category our water pleasures put us in, we were hooked.

Last week, on the much anticipated day of July 15, I eagerly logged onto Amazon for what they promised would be the best day of my life: Prime Day.

“Better than Christmas!”, they said.

“We’re going to give you everything we have for mere pennies!”, I read.

I looked forward to stocking up on all of the things nearly as much as Noah looks forward to asking me every day how many days it is until his birthday.

But, as was the rest of the world, I was sorely disappointed and drowned in the betrayal of Amazon’s gigantic campaign of false advertising.

Violent video game for a system you don’t own – $5 less than usual!

I wept over the wasted anticipation that I had set aside for Prime Day. And it was dead to me.

But right before I clicked with a vengeance off of the page, a deal came up for fruit infusing water bottles.

Memories flooded over me of the miraculous hydration powers of infused water and I jumped with excitement. Finally! A Prime Day Deal I can actually use! I clicked through to buy Chris and I each a water bottle and immediately started fantasizing about all of the amazing subtly fruity concoctions that I’d prepare for us, therefore upping my Wife Stock by at least 30%.

But of course, the deal was “sold out”. Which means that I had to (and absolutely did) pay full price for those bottles (full price which was even $1 more expensive than it is now). And then I bought a fruit infusing pitcher to boot.

They arrived over the weekend, and I couldn’t wait to attempt to make lovely water as if I were a Marriott Hospitality Specialist.

The pitcher had a large sticker on the outside of it touting all of its benefits, and the two bottles had delightfully Google-Translated labels on their boxes, 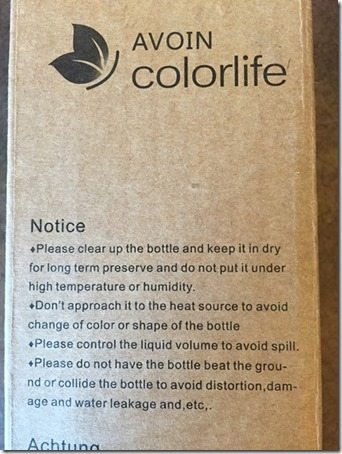 I solemnly promised not to approach my bottles to a stove or to allow the bottles beat the sidewalk or collide the pavement and,etc,. Then I dismantled them and began washing. When I got to the pitcher, I started peeling off the label, because labels are evil.

Except that it wasn’t the nice peel-off kind of evil label. At all.

It was the type with the thick paper outer layer, the thin paper under layer, and the absolutely psychosis-inducing gummy layer. The kind of gummy layer that only squishes around when you scratch it with your fingernail and attracts every dirt particle in the house to instantaneously turn your pitcher into a dull, gray, sticky bug trap.

I alcoholed (the label – not myself, although it might’ve helped my growingly-obsessed mental state.)

I scrubbed some more.

I considered the fact that there was probably an oil for this problem.

As I stood at my sink for this eternal span of time while my children moaned for lunch and my messy house glared at me from every angle, I appreciated the irony that I was spending my day on a label retraction instead of the more pressing matters that were not, as the label was, making me lose my mind.

I finally gave up and perhaps more than forcefully than necessary dropped the pitcher.

Then, to make myself feel better, I wrote my first ever Amazon review. 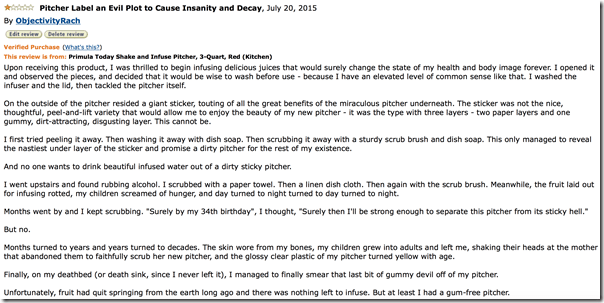 Somehow, this releasing of words fueled me to be able to go on with my life, and I filled all my new pretties with lovely fruit and cold water and began shaking them vigorously (like Shake Weights! With Fruit!) to expedite the infusion process. Chris and I drank great quantities of melon-and-cucumber water, plum-and-cherry water, and quickly poured out grapefruit water (because despite what hotels had taught us, nasty bitter rinds infuse, too.) 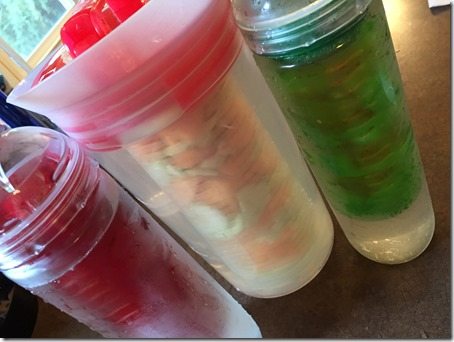 We learned that infused water is delicious, is not delicious to children, speeds up…ahem…digestion, and makes us very happy – even if we haven’t just been running in the July heat.

But every time my hands stick to my children’s hair when I hug them, and every time I find a fly that is hopelessly fused to the palm of my hand, I remember and curse the horror that is the outside of my eternally sticky pitcher. 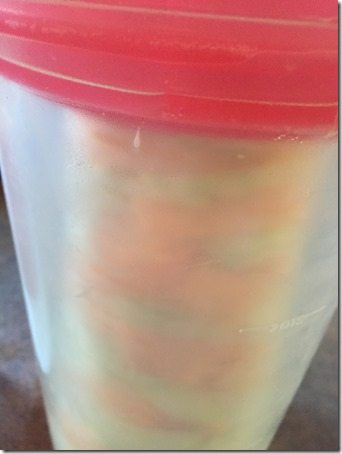