This is the last installment of my Missionary Friend’s Stories, and then I’ll be back soon to tell of the adventures that have befallen our family in the past two weeks. To read the whole Missionary series, click here. I am eternally appreciative to my friend for covering for me while I was out – she’s been a delight to host.

My husband is a nutcase.

Last year, two children were killed by crocodiles in our area. Both were young boys on their way home from school. One had been taken while he was cooling off in a calm pool by the water’s edge, and another while checking his fishing line for a catch. The crocodiles in our area are not huge – usually about 7-8 feet long. Thankfully, our river can’t support the monster-sized ones you see on National Geographic shows. But no matter how big, a crocodile in his own territory, especially in water, is a force to be reckoned with.

The local community was in an uproar – something needed to be done. But in a culture where witch doctors are believed to control the crocodiles who do evil work for them, not a single one of the locals was willing to go croc hunting – at least not on their own.

Here is where my husband enters the picture.

My hubby is known for being a bit of a “cowboy” missionary. He does the crazy things no one else is willing to do – either because they cant MacGyver a way to a solution or they are not out of their minds enough to do it. He is often called upon to get everyone out of sticky situations – with snakes, with complicated construction problems requiring creative solutions, and yes, with crocodiles. He also hunts with a bow and arrow (albeit a compound bow with snazzy broadheads), which makes him somewhat of a local legend in these parts.

The local community knew just who to call to help bring some peace of mind – my hunter hero hubby. Within days, he had come up with a float, line, and bait system that included a massive hook homemade out of rebar along with a deal with our local butchery (friends of ours) who donated as many cow hearts as they had every week to the cause.

For weeks we tromped down to the river, across the river (yes I know that seems risky but hey – we had to get to the “right” place apparently) setting baits and hoping the croc would come and take them. Several times the local guy who was helping us would call excitedly to say a croc had come, but it was always gone by the time we got there. (I went along quite often just to witness the adventures and make sure my husband came home in one piece.)

Then one morning we got the call. The float was going back and forth across the river, and had been for a while. There was a croc. We loaded up our little kayak canoe combo and headed out. When we arrived, the float was halfway under the water (meaning something pretty strong had pulled it down as it was a big float), and everyone was convinced the croc was down there. My hubby paddled out, attached a rope to the float and then came back to shore. Everyone wanted to help pull – even the little kids – but not even the whole group could pull it free. My hubby decided he would just cut the line, leave the hook and set a new trap. The locals were not convinced. 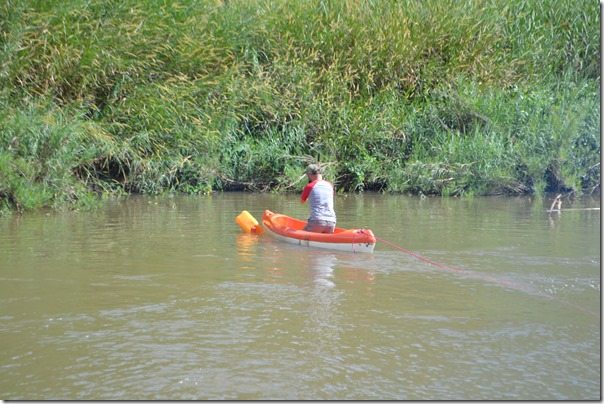 “No Pastor- we have to get the croc out of there- if you leave it, it will get strong again and kill more people!”

“Pastor, just swim under and pull it out, then we will be safe!”

Right. Just swim under the murky brown water into the croc-infested river where you are certain a croc is now dead (hopefully dead!) and pull it out. It seems so easy, but none of them were volunteering for the job.

Although they are afraid of crocodiles, it is for the most part because they think the crocodiles only attack when the witch doctor tells them to. They are more scared of the “evil” in the crocodile than of the crocodile’s natural dangerousness as a result of its massive crushing jaws and insane amounts of razor sharp teeth, coupled with a powerful “death roll” capability when in water. Of course my husband is more concerned with the teeth/jaws/death roll than any perceived “evil”- but try to convince the locals of that! All they knew was the missionary was scared to go in the water with the witch doctor’s crocodile – just like them.

“Pastor, let us call the witch doctor, he lives right over there, he will tell the crocodile not to attack and then it will be safe for you.”

Now here is a missionary moral dilemma. He obviously can’t condone calling the witch doctor, but by not going in, they would assume he was scared of the evil spirits. And so, my hubby came to the only logical conclusion that a creative cowboy hunter could come to: In order to prove he was not scared of the spirits and demonstrate God’s power, he would jump in and try to get the hook – and possibly the crocodile – out.

(I sat on a rock in the middle of the river and held my iPad up at just the right angle to get cell service so I could Google how long crocodiles could survive under water. According to Google, we were in the clear. So I gave the “it’s up to you, honey” okay.)

He swam down, nearly had a heart attack when he touched flesh, but then realized it was the cow heart. The croc had wrapped the hook around a fallen tree and gotten away. Again. Which meant my husband was now swimming in a river with a potentially injured croc who was FREE.

Back in the boat he went and that was the end of croc hunting for that day.

(Side note- I took a picture just moments after he paddled off, and when I looked at it later, saw a croc about 30 feet behind where he had been – AAAAAHH!)

The next week, we were called again- this time a croc had badly injured its tail on the cable attached to the bait and hook and could not swim. It was holed up in a cave near the river, and they were ready to catch it.

Or rather, ready for my hubby to come get it.

This is one of the times in my life that I look back and realize that God does hand out a certain amount of peace and an ability to deal with things just when we need it. I don’t think I could deal with this sort of thing today as calmly or casually as I did last year. For some reason it seemed fine to me to watch my hubby crawl into a cave no more than a foot and a half tall armed with nothing but a flashlight and his camera to try and get a look at a badly injured and cornered croc. 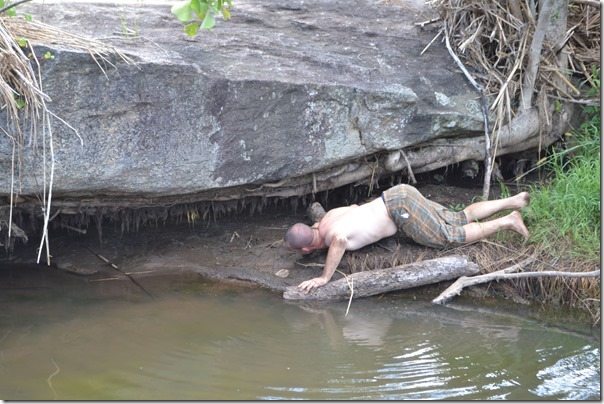 And for some reason, my hubby thought that was a smart idea.

As the crocodile glared and hissed at him, he thought better of it and made a hasty retreat to make a plan. First, they tried smoking the croc out by shoving in large bundles of burning green grass. He just closed his nostrils and eyes and waited it out. Crocs can stay under water without needing air for over an hour, so our little smoke bundles were not really a bother.

Then the creative MacGyver side of my husband came out. He got a 16 foot piece of steel rebar, used a hacksaw to sharpen it into a point, and crawled back in. (I think I should get extra brownie points for putting up with this sort of thing, right? Like, if there was a gold star chart for “women who have husbands who do crazy stupid things”, surely I’d be near the top of the list of sticker winners for sure!)

Once he was about 6 feet from the now panicked croc, he fed the rebar up to the croc’s side and poked him – hard. An angry crocodile makes a noise very similar to a roaring lion. The loud roar started emanating from the cave and I watched as the locals started panicking – all they could see was my husband’s kicking feet (trying to get traction to hold the croc back with the homemade spear), and they were certain evil spirits were making the noise as not a single one of them had ever heard a croc make a noise like that before. 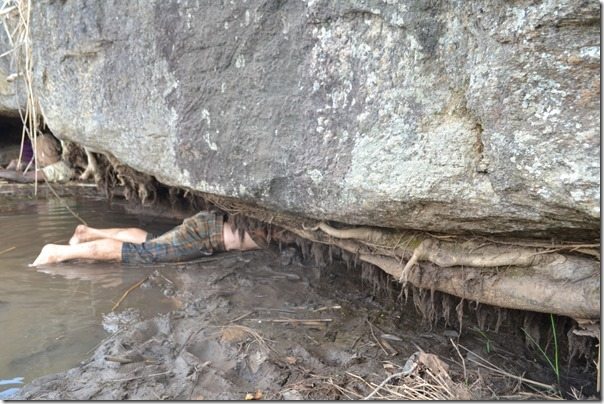 After a few seconds of panic and chaos, one of the local guys finally heard my husband yelling for someone to PLEASE hit the end of the “spear” with the large mallet we had brought. He jumped in and hit the spear through the croc while my husband held it in place against the tough skin of the struggling and now VERY angry reptile.

They dragged the injured croc out, and my husband was able to put the croc out of his misery – screaming like a terrified schoolgirl as he did it. 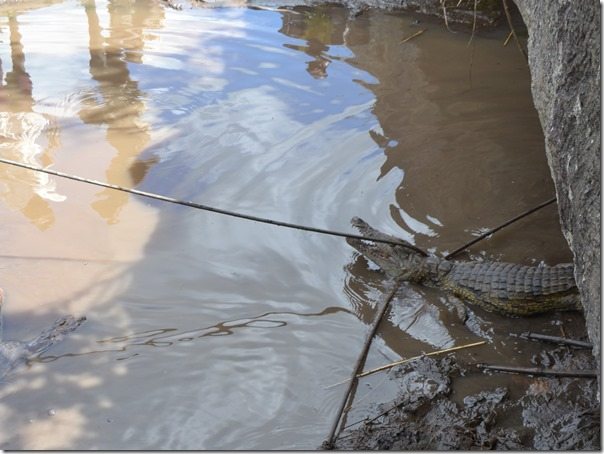 The people were ecstatic and carried the dead crocodile to the community leader like a trophy. We have no idea what became of it – we only know that now every time we show up to the community, my husband is regarded as a brave and wise man, and his word means something – he gets a level of respect usually only shown to elders. My hubby was able to use his skills and (stupid) courage to demonstrate Christ’s love to a community in mourning.

We sometimes forget as missionaries that it is not always our teaching and preaching that will impact the most – it is our actions and our willingness to serve in the craziest of circumstances that makes the most difference. Whether it be helping to treat a severe and embarrassing medical need despite the awkwardness, or putting one’s own safety on the line and trusting in God’s protection to help a community feel that “justice” had been served. Many in our area are now convinced that even if the witch doctor does have power over the crocodiles, God has more power – all because a crazy missionary was willing to swim with and get up close with a couple of angry crocodiles!

And, to ease your mind, last year we were able to build a fantastically safe and sturdy bridge that now allows the children and the community to safely get across the river – even during the rainy season! This year, not a single person was hurt by crocodiles in our river. 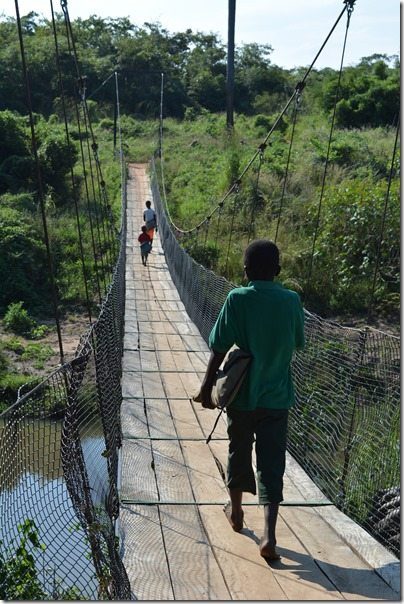 9 thoughts on “When Missionaries Fight Crocs.”