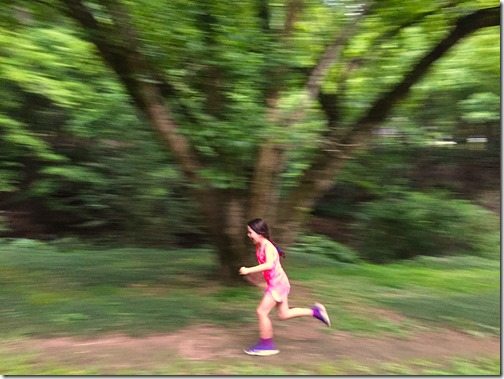 I’m no trailblazer when it comes to running – although I’ll take a new path for an adventure, on my normal runs, I prefer the most favorable locations. Minimized elevation changes (difficult to find in Birmingham), close to my house, running trails or sidewalks, and a clear route.

As such, I pass and am passed by an abundance of other runners and walkers. And I’ve begun noticing trends in runner behavior. Some are just boring runners running by, but a few have quirks. And it’s watching for the quirks that keep me entertained.

You cannot escape this runner. You might as well quit or forge your own path.

2. The Phone-Talker. This walker can only walk while carrying on animated phone conversations. And apparently, phoning while walking makes one extra-gossipy. Be sure to catch whatever phrases you can as you run past – they’re always juicy.
”With the PRESIDENT!”
”Then she found out he was also her step-brother!”
”He stole my favorite copy of 50 Shades of Grey!”
”Then returned it – highlighted.”

3. The Boobouncer. This vigorous running lady is either too largely gifted to be contained by or has never heard of The Sports Bra. As she comes running toward you, you will witness her receiving approximately 94 chin bruises (left and right sides) and you will weep when you think about how excruciatingly sore her chest will be tomorrow. Avoid the temptation to stop her and hand her the sports bra off your back. But feel free to run with extras to hand out en masse.

4. The Red Rover. This group of runners or walkers feel the need for togetherness and camaraderie. As such, they will run or walk in a beautifully straight yet completely impenetrable line. They will take up the entire trail as well as the passing lanes on either side, and their conversation will be so loud and in depth that they will not acknowledge your presence. You will need to know (and scream) the secret password to earn your way through.

5. The Thigh Gapped. You will look at this woman in envy – not because you necessarily want thigh gap, but because of how nicely her thighs are not destroying the inner seam holding together her leggings. Wait – Leggings?! Then you will become infuriated because the only reason you’re wearing legging capris on this blasted 99 degree July day is to save the skin on your inner thighs from being chafed into raw steak (Body Glide or no Body Glide.) If you had thigh gap you would SO be in shorts right now. Why isn’t she celebrating her lack of curves and wearing shorts?? Avoid the temptation to rip her unnecessary leggings off of her media-applauded body.

6. The Dog Tangler. This person has already been discussed at length here, but they’re worth mentioning again. She (or he) is unable to run without their dogs, and are careful to obey leash laws. However, they don’t mind at all when their dogs use those leashes to create, just for you, an instantaneous hurdle. Or worse, completely wrap their leash around your legs as you run by in order to make you fall to certain death. Dog Tanglers are one of the greatest perils to running – right behind unforeseen cliffs and poisonous dart frogs.

7. The Announcer. This guy (it’s always a dude) quietly runs up behind you and yells, right in your ear, “PASSING ON THE LEFT!!!” right before he passes on the left. With plenty of clearance to do so. One can only assume he enjoys being responsible for making you pee a little in your leggings.

(This dude is also often on a bicycle. And you better believe he uses correct arm turn signals as well.)

8. The Loudspeaker. This person enjoys running to music. They do not, however, enjoy headphones. Each time you pass him (because he’s also often a Leap-Frogger), you’ll get 3-6 more words to random lyrics stuck in the head.
“Cause Baby You’re a”
”So we’ll set the world on”
”Took effect to Ferg”

9. The Odiferous. This person stinks. Badly. But you’re running and they’re running so the smell won’t last long enough to be annoying – you’ll just be impressed.

10. The Blogger. This person will watch all of the other runners and then secretly write about them later. This is the worst type of runner indeed.

11 thoughts on “Ten Types of Runners.”